Wolf Richter: Week 9 of the Collapse of the U.S. Labor Market: Still Getting Worse at a Gut-Wrenching Pace

The moment the unemployment crisis stops getting worse and bottoms out would signal the beginning of a recovery of the job market. But instead, it’s still getting worse at a gut-wrenching pace.

In the week ended May 16, state unemployment offices processed 2.438 million “initial claims” for unemployment insurance under state programs, bringing the total number of initial claims over the past nine reporting weeks since mid-March to a mind-bending 38.6 million (seasonally adjusted). The claims reported by the US Department of Labor this morning were over three times the magnitude of the prior weekly records during the unemployment crises in 1982 and 2009.

But It’s Even Worse: 4.4 Million Initial Claims with PUA.

These “initial claims” exclude the gig workers, self-employed, and contract workers who are now eligible to receive unemployment insurance under the special and temporary federal program in the stimulus package, called Pandemic Unemployment Assistance (PUA).

The Number of “Insured Unemployed” Spikes after Last Week’s Calm.

Laid-off workers who filed an “initial claim” for Unemployment Insurance (UI) and state programs and who are still looking for a job a week later are added to the “insured unemployment.” The number of these “continued claims” spiked by 2.525 million to 25.07 million, having weeks ago blown past the pre-Covid-19 record of 6.63 million in May of 2009: 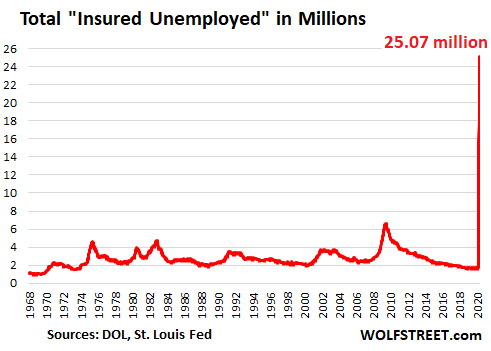 Last week’s “insured unemployed” were heavily revised down today to 22.55 million (seasonally adjusted), just 171,000 above the prior week. And given the enormous magnitude, the revised totals for last week and the prior week look nearly flat in the chart below. However, today’s spike delayed any hopes that the bottom of the unemployment crisis was in 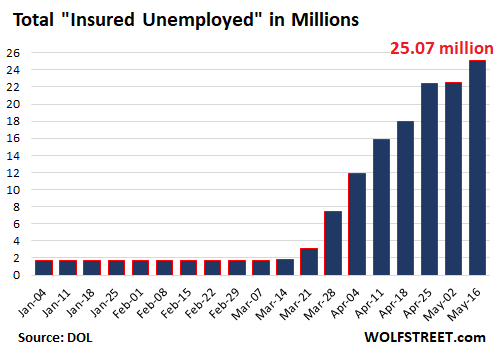 These “insured unemployed” are those in the regular state UI programs and do not include the PUA claims. Including all types of claims, not seasonally adjusted, the total uninsured unemployed combined surged to 27.3 million.

The 28 States with the Most “Initial Claims.”

California is back in first place, after having dropped to third place last week behind Georgia and Florida. During the early phases of this crisis, California’s weekly initial claims exceeded 1 million. These are the regular initial claims and do not include PUA claims:

The “Insured Unemployment Rate” Per State

“Insured Unemployment” are is Different from the Unemployed in the Jobs Report.

In today’s report, the number of “insured unemployed” under all programs, including PUA, of 27.3 million is the number of people with continuing Unemployment Insurance.

Is It Safe To Use Public Restrooms During The Pandemic?

Central banks in a shifting world: Takeaways from...

The Right to Private Property Implies A Social...

Wind Power Is a Disaster in Texas,...

Corporate irresponsibility in the shipping industry