Will There Be a Second Dust Bowl? And What Happened to the Topsoil From the First One?

By Lambert Strether of Corrente

Will the Great Plains once again looks like they’re part of a world imagined by dystopian futurist Simon Stålenhag? 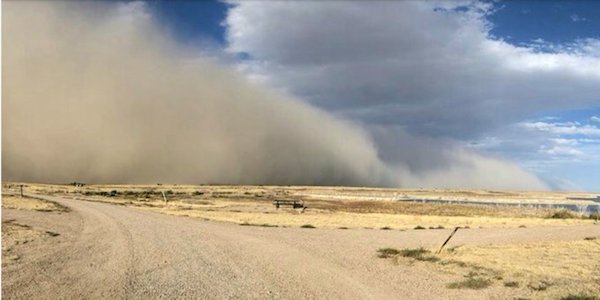 Of course, that’s just one photograph. In the “Dirty Thirties,” there were many photos like this one, taken in the Texas Panhandle under FDR’s Farm Security Administration: 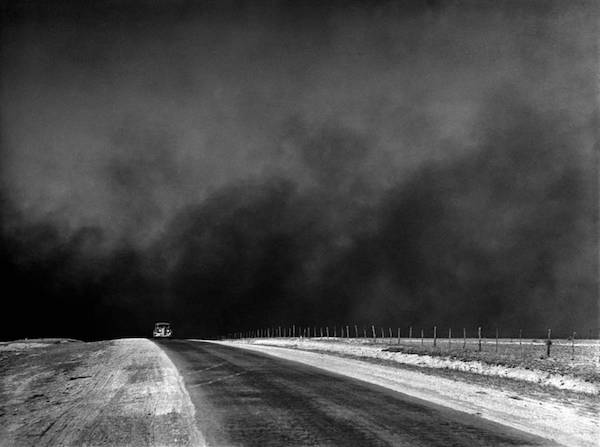 So will there be a second Dust Bowl? In this post, I’ll first look at a study that suggests there might be (although nobody says we are there yet). Then, I’ll look at the implications of a second Dust Bowl, including the prospect of desertification, and what happened the topsoil lost in the first Dust Bowl. (Previous posts on at NC are here, here, and here. I know we have soil mavens in the readership, so I hope they’ll chime in.)

Prospects for a Second Dust Bowl

While the prospect of a seond Dust Bowl is a hardy perennial in the press (see, e.g., November 2012, May 2014, January 2015, August 2019, March 2020, and May 2020), a recent paper in Geophysical Research Letters, “Dust Impacts of Rapid Agricultural Expansion on the Great Plains“, has heightened concern. From the Plain Language Summary section (more publications should require these):

Throughout the U.S. Great Plains, satellite data combined with surface networks have shown a significant increase in airborne dust over the last two decades. This airborne dust is negatively influencing human health and visibility and coincides with increases in agricultural production.

Since the GRL article is paywalled, we must turn to Science for the interpretation, in “Dust Bowl 2.0? Rising Great Plains dust levels stir concerns“:

The findings, reported on 12 October in Geophysical Research Letters, show that across large parts of the Great Plains,

But recent studies are showing how climate change is drying out the region. Greenhouse gases are making heat waves like those in the 1930s far more likely, according to a study published in May in Nature Climate Change. And in an April study in Science, researchers suggested much of the western United States is on the brink of a prolonged megadrought that could outrank anything in more than 1000 years.

Renewed agricultural expansion is adding to the problem. Grasslands are being plowed up to plant corn near refineries that turn corn into biofuels—spurred by U.S. policies that encourage renewable fuels. Soil is left exposed at critical times of the year….Underlining the connection, [Gannet Haller, an atmospheric scientist at the University of Utah who led the GRL study] says the new study identifies a strong correlation between new croplands and the downwind areas where dust levels are growing the fastest.

Phys.org, summarizes the GRL study in “Atmospheric dust levels are rising in the Great Plains“:

The trend of rising dust parallels expansion of cropland and seasonal crop cycles, suggesting that farming practices are exposing more soil to wind erosion. And if the Great Plains becomes drier, a possibility under climate change scenarios, then all the pieces are in place for a repeat of the Dust Bowl that devastated the Midwest in the 1930s.

On Pasture explains the sensors used in the GRL study, and zeroes in on the rising dust in “Is a Second Dust Bowl on Its Way?”

The focus of the study… was to quantify how much the amount of dust in the atmosphere over the Great Plains had changed in recent decades. To do that, they tapped into instrumentation that measures atmospheric haziness from the ground up and from space down. From the ground, the IMPROVE monitoring network is run by several federal agencies and measures the amount of particulate matter in the air at sites, including national parks, around the country. Another ground-based network, the NASA-run AERONET, watches for how much incoming sunlight is blocked by dust and aerosol particles in the air. From space, an instrument called MODIS does the same job, looking at how much light reflected from the surface is similarly blocked by particles.

All together, the data cover years from 1988 to 2018. Dust, they found, is increasing in the atmosphere over the whole of the Great Plains by as much as 5% per year.

“The amount of increase is really the story here,” Hallar says. “.”

Of course, airborne dust doth not a Dust Bowl make. But that’s the connection many on the Great Plains are making. From National Geographic, “Parched: A New Dust Bowl Forms in the Heartland“:

In Boise City, Oklahoma, over the catfish special at the Rockin’ A Café, the old-timers in this tiny prairie town grouse about billowing dust clouds so thick they forced traffic off the highways and laid down a suffocating layer of topsoil over fields once green with young wheat.

They talk not of the Dust Bowl of the 1930s, but of the duster that rolled through here on April 27, clocked at 62.3 miles per hour.

And if we don’t have a mega-drought yet, we’re certainly having droughts. From the U.S. Drought Monitor animations page:

With these warnings echoing in our minds, let’s turn to the implications of a second Dust Bowl:

Implications of a Second Dust Bowl

A second Dust Bowl would be very bad. From Frontiers in Sustainable Food Production, “Simulating the Cascading Effects of an Extreme Agricultural Production Shock: Global Implications of a Contemporary US Dust Bowl Event“:

In this study, we analyze the global potential impact of a present-day event of equivalent magnitude to the US Dust Bowl, modeling the ways in which a sudden decline in US wheat production could cascade through the global network of agricultural trade. We use observations of country-level production, reserves, and trade data in a Food Shock Cascade model to explore trade adjustments and country-level inventory changes in response to a major, multiyear production decline. We find that a 4-year decline in wheat production of the same proportional magnitude as occurred during the Dust Bowl greatly reduces both wheat supply and reserves in the United States and propagates through the global trade network. By year 4 of the event, US wheat exports fall from 90.5 trillion kcal before the drought to 48 trillion to 52 trillion kcal, and the United States exhausts 94% of its reserves. As a result of reduced US exports, other countries meet their needs by leveraging their own reserves, leading to a 31% decline in wheat reserves globally. These findings demonstrate that an extreme production decline would lead to in both the United States and in other countries, where impacts outside the United States strongly depend on a country’s reserves and on its relative position in the global trade network.

Plus a lot of people would starve, and bread riots are never good for regime stability.

While land degradation has occurred throughout history, the pace has accelerated, reaching 30 to 35 times the historical rate, according to the United Nations. This degradation tends to be driven by a number of factors, including urbanization, mining, farming, and ranching. In the course of these activities, trees and other vegetation are cleared away, animal hooves pound the dirt, and crops deplete nutrients in the soil. Climate change also plays a significant role, increasing the risk of drought.

As with so many other issues having to do with soil, we have a definitional controversy. NASA’s Earth Observatory, “Temporary Drought or Permanent Desert?” adds an important element to the discussion:

Scientists are beginning to say that . In other words, land is desertified when it can no longer support the same plant growth it had in the past, and the change is permanent on a human time scale. Many things can cause desertification. Drought, overgrazing, fire, and deforestation can thin out vegetation, leaving exposed soil. If the nutrient-rich top soil blows or washes away, plants may not be able to return. Overfarming or drought can change the soil so that rain no longer penetrates, and the plants lose the water they need to grow. If the changing force is lifted—drought ends or cattle are removed, for example—but the land cannot recover, it is desertified. The loss of productive land for a season or even a few years is one thing, but to lose it effectively for ever is clearly far more serious

Here are some figures on the topsoil — yes, I finally got round to it! — that was lost in the first Dust Bowl. From the Kinsley Library, in Kinsley, KS, “Handy Dandy Dust Bowl Facts“:

More than 850 million tons of topsoil had blown off the southern plains in 1935, nearly 8 tons of dirt for every resident of the United States. In the Dust Bowl, farmers lost 480 tons per acre. 100 million acres might never be productive farmland again.

In the 1930s the government bought 11.3 million acres of dusted-over farm fields and tried to return it to grasslands. In 2000, some of it is still sterile and blowing.

So, what happened to the topsoil in the first Dust Bowl? It blew away, and most of it is gone. That’s irreversible. My concern is not so much a second Dust Bowl, but the third, the fourth, the fifth. How many Dust Bowls does it take before the Great Plains becomes another Great American Desert? As with Covid, nature may have been generous enough to give us a trial run with a relatively easy plague. But what about next time?

A Graphical Primer to Interpreting the Sources of...

Swimming With Sharks in the Maldives

Why a Bear Market in Bonds Points to...

Why Record Numbers of Workers Are Quitting and...

Simulating the future of global automation, its consequences,...

Why Did Google Ads Ban LewRockwell.com?

Can the Dollar Survive Both Cryptocurrencies and...