Trending Now
Compound Interest Explained | Personal Finance For Beginners
Who did he play? The Dingle family tree
These Home Remedies For Jock Itch Might Worsen Symptoms
Extensive Study on Twizzler Market 2019
Why Japan took so long to start Covid-19 vaccinations, even...
A Less Trumpy Version of Trumpism Might Be the Future...
5 questions to ask yourself when buying new skis
10 ways Covid 19 has changed the World Economy in...
Fox Factory Holding Corp. Announces the Retirement of Larry L....
Biden ambitions run into reality of Senate’s rules
Fashion

What the Inauguration Day Outfits Say About Administration

On Inauguration Day, my social feeds, real-life conversations, and even cable-news coverage were flooded with talk of the clothes from the ceremony on Jan. 20 — the designers that were worn, the meaning behind every jacket and accessory, and what these choices signified for the new administration. Aside from the few displeased folks who demanded to know why fashion — something they viewed as so trivial — even mattered on such a momentous day, the collective excitement had me wondering: why did we care so much about the inaugural fashions? The way I see it, the reason is twofold; for one, what politicians choose to wear, especially at an event where all eyes are on them, is purposeful and does matter. And two, simply enjoying fashion in the midst of a political moment frankly felt quite refreshing after what felt like four years of constant political turmoil at the forefront, with no room to talk fashion.

It’s not just about our political figures looking great — which they certainly did on Inauguration Day — it’s about the message they send with the clothes they choose.

Fashion is undoubtedly political. It’s not just about our political figures looking great — which they certainly did on Inauguration Day — it’s also about the message they send with the clothes they choose. Kamala Harris didn’t just wear a pretty purple coat and sequin cocktail dress on Wednesday. Her decision to wear these ensembles, which showcased and uplifted emerging Black fashion designers, underscored the Biden-Harris administration’s values of unity and inclusivity, and celebrates the importance of the American fashion industry.

“She was obviously the center of her own spotlight, but her choices brought other people into it,” Robin Givhan, Washington Post senior critic-at-large, told POPSUGAR. The choice to bring these often-overlooked designers into the spotlight with her was exactly that: a choice. Since their days on the campaign trail, Joe and Kamala have highlighted their promise to unite the country, and this message was more clear than ever on Inauguration Day, as indicated by their words, actions, and yes, even their clothes.

This sentiment was also reflected in the looks worn by their spouses: Jill Biden picked an ocean blue monochrome look by emerging designer Markarian for the day and a white Gabriela Hearst coat and dress combo that paid homage to the US states for the evening. Douglas Emhoff, on the other hand, wore a gray suit from Ralph Lauren, a nonpartisan American designer that was also chosen by Biden to mark the beginning of his presidency.

“Particularly on a day like Inauguration Day . . . to visually remind people that every industry is embraced and will be propelled forward is a powerful thing.”

Pulitzer Prize-winning fashion critic Givhan explained that the president and vice president’s desire to represent these designers emphasizes that fashion is an important American industry, just like any other. In the same way that we expect politicians to be driven around in American cars or use American china at the White House, she said, “We expect the White House to celebrate American creativity,” which extends to the fashion industry. “Particularly on a day like Inauguration Day, when the focus is so much about what it means, the place that the country is in, and what it means to be moving forward, to visually remind people that every industry is embraced and will be propelled forward is a powerful thing.”

Historically, inaugural fashions have allowed for the first family to communicate their intentions and values for the new administration in the pieces they choose. When Jackie Kennedy wore a glamorous gown and cape to John F. Kennedy’s inauguration in 1961, it signified her desire to elevate American art and history. Michelle Obama’s high-low combo of a Thom Browne coat cinched with a J.Crew belt at the 2012 ceremony, on the other hand, showcased the Obamas’ aspirational yet approachable demeanor and the administration’s goal to strengthen unity and democracy in the nation. For George Bush’s first inauguration in 2001, Laura Bush chose Texan designer Michael Faircloth for her classic and traditional bright-blue coat, which not only honored her roots and brought attention to a relatively unknown local designer, but also reflected the then-president’s rhetoric of compassionate conservatism.

But just as members of the new administration, as well as those in the past, have used their clothes to drive forward a narrative, it’s also important to remember that anyone can make the decision to take fashion out of the conversation, Givhan said. Take the previous administration, for example. While Melania Trump’s style has been criticized in the past for disrespectful messaging — who could forget that “I Really Don’t Care” Zara jacket? — many fashion critics aren’t sure if the former first lady was ever looking to say anything at all. Unlike the way former first ladies such as Jackie, Michelle, and Laura have in the past, it often seemed as though Melania was disinterested in using fashion as a communication tool.

In fact, her chief of staff at the time specifically asked people not to focus on Melania’s wardrobe. “The previous first lady made a decision that her choices were going to be predominantly based on what she wanted to wear; what aesthetically delighted her,” Givhan said. “I don’t think that she had a particular desire or interest in working to elevate the American fashion industry. I think her choices were much more personal.” At the same time, many designers also took a firm stance against dressing the former first lady, perhaps making her decision rather easy. 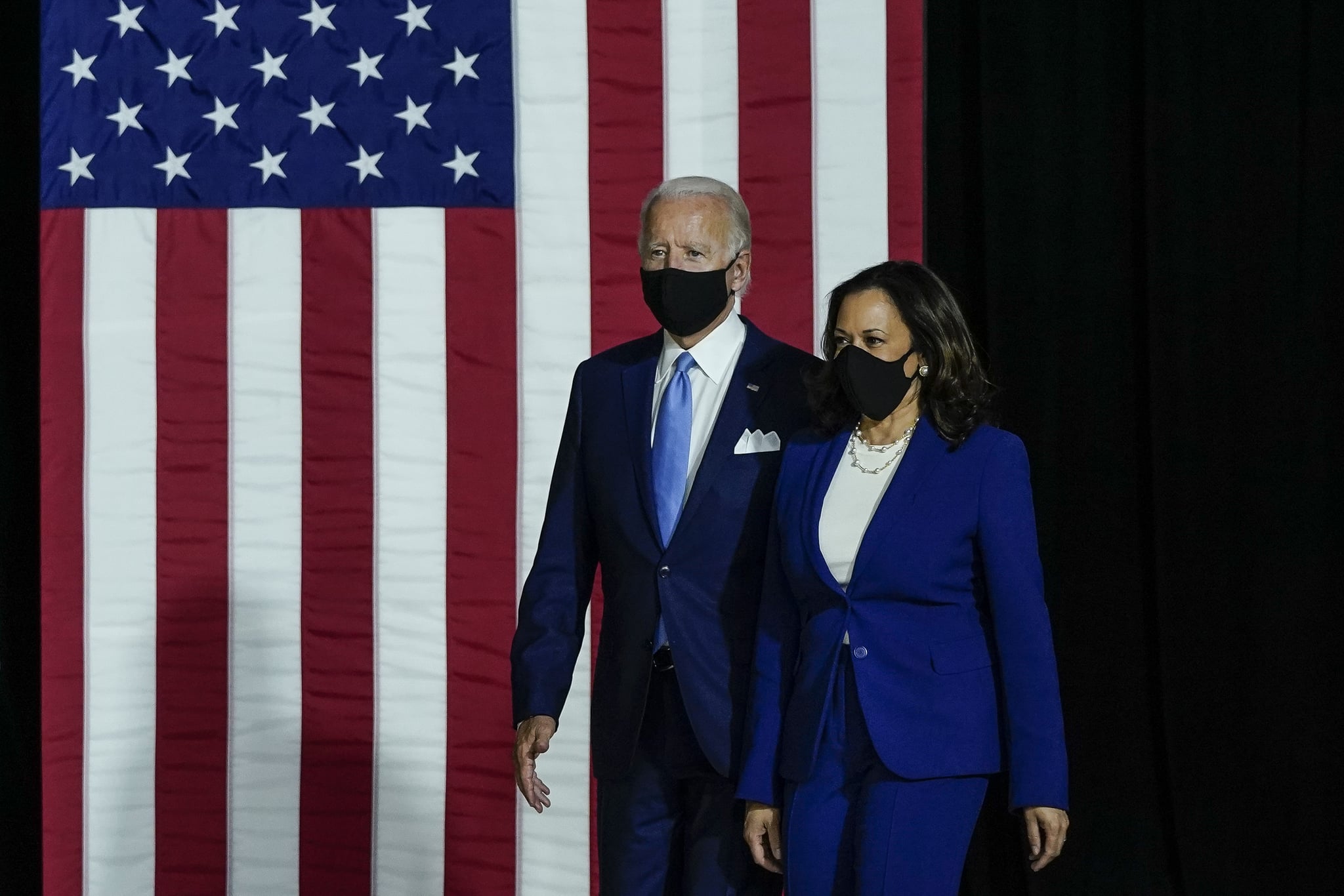 On the other hand, Joe and Kamala have been communicating politics through their looks since day one. When Joe introduced Kamala as his running mate, she wore a bright blue set, while he opted for a navy suit with a light blue tie. Givhan found their choice of dress to be striking. “They came out looking so visually in sync. I thought that that was a really powerful message because in many ways, they really are opposites.” And throughout their campaign and journey to the White House, both of them have continued to express their values through their clothing, whether it’s via subtle coordination when they’re together or strong statements on their own.

While we’re only a few days into this new administration and there’s still much work to be done, I have to admit the conversations surrounding Inauguration Day gave me a sense of comfort and relief in the fact that we can find joy in a political event again, by way of fashion. Jan. 20’s historic events were undeniably a stark contrast to the last four years of a turbulent Trump era, where many felt uneasy at practically every moment, and certainly on days of political significance. During those moments, it felt like there was no time for us to think and talk about the fashion — we were too busy worrying about the actions made by our president, as well as the ramifications that followed. 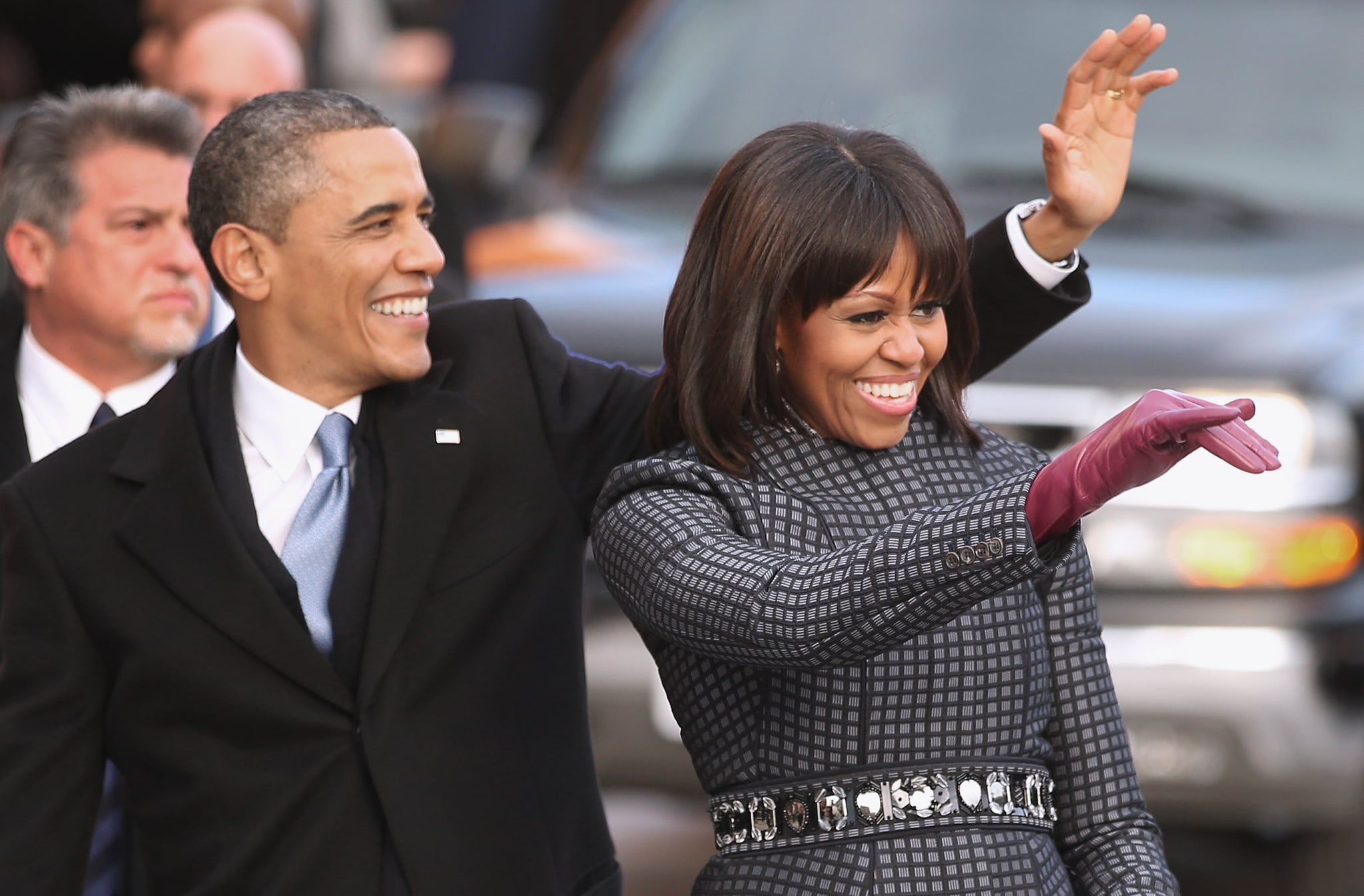 On Inauguration Day, I felt a shift in perspective that brought me back to the Obama administration, when Michelle really started to use her clothing as a storytelling device. We obsessed over her mix of high and low fashion, the various American designers she championed, and her overall understated elegance. “Her wardrobe was representative of the country her husband wanted to lead,” Chief Fashion Critic Vanessa Friedman wrote in The New York Times back in 2017. “It was about the melting pot and the establishment; the 1 percent and the accessible.” People had been interested in the former first ladies’ fashions long before Michelle moved into the White House, but her fashion influence reached new heights while Barack was in office.

In the same vein, the encouraging messages that we heard through both Joe and Kamala’s words and style simply made it fun to talk fashion in politics. Perhaps it’s reminiscent of how we felt in 2014, when Obama’s hilarious tan suit controversy seemed like the biggest scandal of the month. Additionally, I think the joy we felt this inauguration stems from Kamala being the first woman to assume her role, which allows for us to see what a female vice president’s fashion looks like and the story it tells. We’ve seen how the style of first ladies has evolved over the years, but Jan. 20 gave us a taste of what we can expect from the vice president. “I think the clothes can underscore her message, but they don’t replace it,” Givhan said. And while we tend to focus less on male politicians when it comes to fashion, Joe’s dedication to boosting American designers also has a similar impact.

The new administration marks so many different changes in the midst of a global pandemic and deep divide in our country, but I have to say, the enthusiasm for inaugural fashion, coupled with the Biden-Harris administration’s optimistic words, have certainly made me feel hopeful. What a breath of fresh air it was to investigate the beautiful coats spotted at the inauguration and joke about the never-ending memes of Bernie Sanders wearing his Burton coat and sustainable mittens. Here’s hoping that we can continue to get excited about fashion in the world of politics.

money is just an IOU, and the banks are rolling in it : Economics

Who Needs Big Brands When You Have Ella...

When the Romance Ends, but the Brand Goes...

Men’s Wear Is on a Quilt Trip

The Best Running Tights Keep You Warm and...

What Does It Mean That Meghan and Harry...

Self-Isolation Diary: A Day in the Life...