What Happens Next with the U.S.-China Rivalry


U.S. President Donald Trump continued his offensive against China this week, reviving the theory that the coronavirus originated from a lab in Wuhan based on evidence he had seen (but did not share). The same morning, the Office of the Director of National Intelligence released a statement saying that while it “concurs with the wide scientific consensus that the Covid-19 virus was not manmade or genetically modified,” it would continue investigating “to determine whether the outbreak began through contact with infected animals or if it was the result of an accident at a laboratory in Wuhan.”

Look past the growing concerns of the politicization of intelligence assessments for a moment; the developments this week serve as a reminder that if and when the world ever gets back to normal, that new normal will likely feature a U.S.-China rivalry even more intense than the one that came before. Here’s what you need to know.

Donald Trump’s offensive against China started long before he took office; on the 2016 campaign trail, he cast China as the great villain in the “America First” story. And while it’s come in fits and starts, Trump has made good on his threat to tighten the screws on China. For the last three decades, China’s meteoric economic ascent has been predicated on not drawing the ire of the U.S., letting the Americans shoulder the costs of global leadership while China enjoys the spoils of globalization and a stable geopolitical order. Trump was by no means the only China hawk out there back in 2016, and his aggressiveness against China (combined with legitimate criticism of troubling Chinese practices, like IP theft) has found supporters on both side of the aisle. Today, wariness of China and its global ambitions is one of the few things uniting Washington, even if there are plenty who think Trump is an imperfect vessel for this message.

Yet as far as the mechanics of the U.S.-China rivalry were concerned, most assumed time was on the side of Chinese leadership, with China catching up to the U.S. in terms of military strength, economic size, and tech prowess. Another element working in China’s favor is the fact that U.S. presidents have to run for reelections and be constantly monitoring economic and popularity levels to remain in power, all of which limits their policy options. Chinese presidents, by contrast, aren’t elected by the Chinese people, and so have the political wherewithal to design and implement state-led industrial policy and pursue political reforms over long periods of time. That was especially true of Xi Jinping, the most dominant political figure in China since Mao, and was reinforced by him successfully scrapping term limits, clearing the way for him to rule for life, back in 2018. 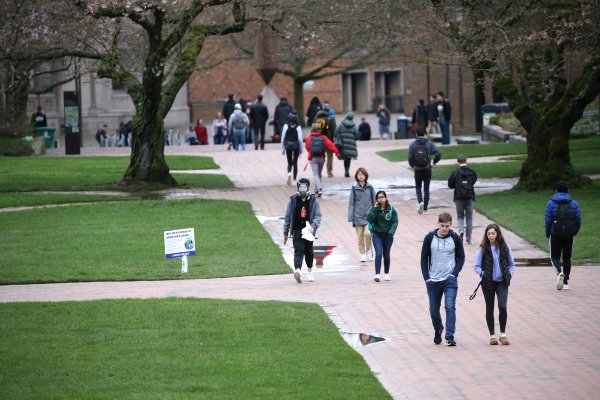 But a lot has changed since then… especially in the last three months.

As coronavirus rages, it threatens the one unassailable quiver in Trump’s campaign arrows—the strength of the U.S. economy. Data figures released this week that the U.S. economy plunged 4.8 percent in the first quarter, and much worse is expected for second quarter figures when the lockdown in the U.S. began in earnest (to say nothing of the 30 million jobs the U.S. economy has hemorrhaged in the last six weeks). That hit to the American economy would be bad enough for Trump and his reelection prospects, but he’s made a bad situation even worse by first dismissing the threat, then touting unverified miracle cures, picking fights with governors, and generally shrinking from taking any responsibility over coronavirus and its fallout. Today, his popularity stands at 43% (according to FiveThirtyEight’s blended rating), and recent reporting says that internal polls show him losing to his Democratic rival Joe Biden in key swing states. This is all bad for Trump—Trump had successfully dodged any meaningful political crisis that wasn’t of his own making up until now; today a genuine bolt-from-the-blue crisis has hit Trump and it’s no cheap trick to bluster his way out of. In his frantic attempts to avoid the political blame for what can charitably be described as an “inadequate” American response to coronavirus, he has seized on the “blame China” narrative and will lean on it even more in coming months as the election nears. At the minimum, expect more U.S. actions against Huawei and investigations in Congress of China’s response to the pandemic.

None of this is surprising; more surprising have been notable stumbles from Beijing since the crisis erupted. It’s clear that the virus originated in China, and that the initial coverup of that fact (and continuation of travel to and from Wuhan) spurred the pandemic’s global spread. Rather than showing any contrition, China instead tried to use the bad situation to its advantage, embarking on a humanitarian diplomacy outreach push to help win it some allies. And it actually seemed to be working for a bit there, especially when juxtaposed with the complete absence of the U.S. from global leadership at a time of an acute global crisis.

Unfortunately for China, that PR campaign was undercut by subpar medical equipment and recalls, and further undercut by the unbelievably low numbers (literally unbelievable) that China is self-reporting about coronavirus at home. China holds itself up as a model of pandemic response (one helped along with repressive lockdown measures which are beyond the capabilities of most democratic societies); now that’s being questioned. China is also sacrificing some of its goodwill by threatening economic consequences for countries that are calling for an independent international inquiry into the source of the virus.

It’s not just international criticism Xi is worried about—the recent investigation launch against vice minister of public security Sun Lijun on corruption charges signals that domestic criticism of Xi’s approach may be simmering, as did the uptick in social media criticism that Chinese censors had struggled to get ahead of. Murmurs that Xi isn’t automatically guaranteed a third term when his term expires – while still unlikely – will make him more sensitive to international criticism, especially from the U.S., and more likely to overreact.

That puts the U.S.-China relationship on a whole other footing; so long as Xi’s political future wasn’t in question, the hope was that cooler heads would prevail on at least the Chinese side to keep the global economy on an even-keel. Now that the global economy has been upended by coronavirus, and both Trump and Xi have increasing domestic political reasons to escalate the fight with one another to avoid the finger-pointing back home, the potential for this to spill from a tech cold war and trade rivalry into an actual cold war once the current pandemic recedes grows daily.

The One Thing to Read About It:

Leaving aside the politics—did coronavirus actually originate in a Chinese lab?

Probably not; this Washington Post piece is a good roundup of why.

The One Major Misconception About It:

On the same day he talked about the possible lab origins of the virus, Trump also declared that the Chinese are rooting for him to lose in November elections.

Not exactly; China is braced for the fact that no matter who wins or loses in November, bipartisan hawkishness against China is going to be a factor in Washington for some time to come. That being the case, most officials in China privately say they’d prefer an anti-China president in Trump’s style—divisive, unilateral, dismissive of allies—than in the mold of Joe Biden.

The One Thing to Say About It on a Zoom Call:

China had an honest-to-goodness opportunity to redeem itself after the original virus coverup by taking a global leadership role and actively helping others cope with the fallout from the outbreak. It failed to capitalize, both for itself and the rest of the world.

Sign up for Inside TIME. Be the first to see the new cover of TIME and get our most compelling stories delivered straight to your inbox.

An Afghan Woman On The Run In...