Since mid-March, Asadul Alam Asif has watched nervously as Singapore reported more and more COVID-19 cases in migrant workers’ dormitories like the one where he lives.

The 28-year-old Bangladeshi technician counted himself lucky each day that nobody was infected in his housing block, where around 1,900 workers reside in cramped conditions that make social distancing impossible. To relieve congestion, Asif’s company rehoused some people, which left half of the 16 bunk-beds in his small room empty.

But then, one day last week, seven people in Asif’s dorm tested positive.

He received a text message instructing all residents on the fifth and sixth floors—including him—not to leave their rooms.

Asif is one of the more than 200,000 foreign workers living in Singapore’s dormitories, where often 10 to 20 men are packed into a single room. Built to house the workers who power the construction, cleaning and other key industries, these utilitarian complexes on the city-state’s periphery have become hives of infection, revealing a blind spot in Singapore’s previously vaunted coronavirus response.

“The dormitories were like a time bomb waiting to explode,” Singapore lawyer Tommy Koh wrote in a widely circulated Facebook post earlier this month. “The way Singapore treats its foreign workers is not First World but Third World.”

As the coronavirus continues its insidious spread, Singapore’s outbreak suggests the danger of overlooking any population. Even when containment efforts appear to succeed in flattening the curve, keeping it that way remains a difficult, relentless endeavor.

“If we forget marginalized communities, if we forget the poor, the homeless, the incarcerated… we are going to continue to see outbreaks,” says Gavin Yamey, Associate Director for Policy at the Duke Global Health Institute. “This will continue to fuel our epidemic.”

A healthcare worker collects a nasal swab sample from a migrant worker testing for the COVID-19 novel coronavirus at a dormitory in Singapore on April 27, 2020.

The world’s estimated 164 million migrant laborers are particularly vulnerable both to the disease and to its economic fallout. Their risk of infection is compounded by factors like overcrowded living quarters, hazardous working conditions, low pay and often limited access to social protections.

“Migrants are likely to be the hardest hit,” says Cristina Rapone, a rural employment and migration specialist at the U.N.’s Food and Agriculture Organization (FAO).

For undocumented workers, the threat of the virus is even higher. “They might not seek healthcare because they may risk being deported,” Rapone says. 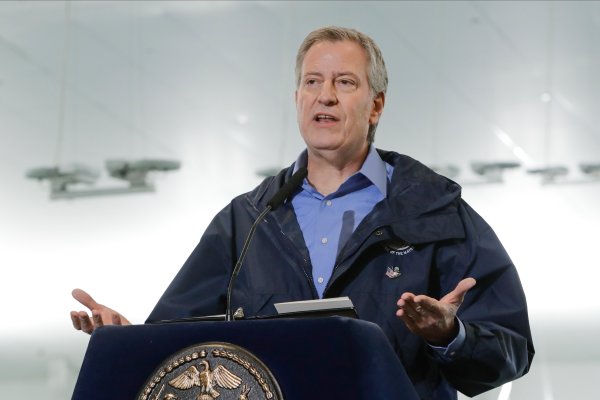 Read more: Coronavirus May Disproportionately Hurt the Poor—And That’s Bad for Everyone

In the Gulf, a wealthy region dependent upon blue collar labor from South Asia, Southeast Asia and Africa, the virus has also ripped through migrant worker housing. Figures from Kuwait, the U.A.E. and Bahrain suggest the majority of cases have been among foreigners, many of whom live in unsanitary work camps, the Guardian reports.

Migrant workers with insecure, informal or seasonal jobs also tend to be among the first to be let go in a crisis. When Indian Prime Minister Narendra Modi hastily announced an impending nationwide lockdown in March, hundreds of thousands of internal migrant workers suddenly found themselves unemployed and homeless, forced to flee the cities en masse. The arduous journeys back to their villages—some reportedly walking as much as 500 miles—were made worse by the stigma of being seen as both patients and carriers of the virus. 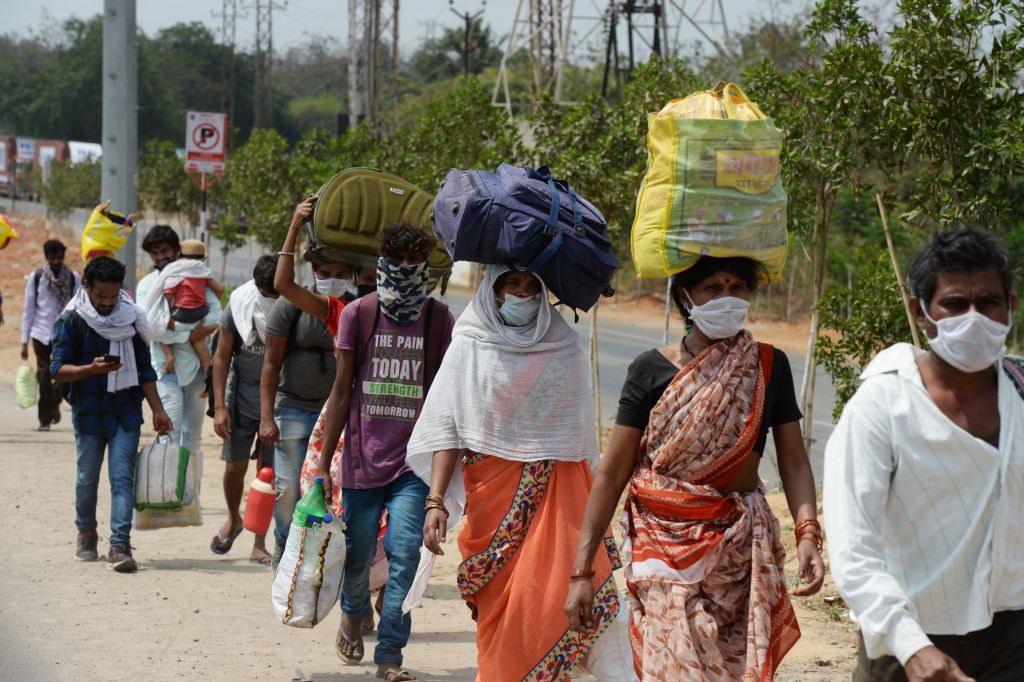 Indian migrant workers walk along a highway on the outskirts of Hyderabad, India, on April 28, 2020.

“There is increasing risk that migrants returning to rural areas face discrimination and stigmatization, because they are said to be carrying or spreading the virus,” says Rapone. FAO staff in Asia and Latin America have reported such cases, she adds.

Yet the spread of the coronavirus has also revealed just how much of the “essential work” depends on migrants, from the medical sector to deliveries to the global food supply.

In the U.S., about half of the farmworkers are undocumented immigrants, according to the Department of Agriculture. Classified as essential workers, they continue to toil in fields, orchards and packing plants across the nation, even as much of the economy is shut down. Limited access to healthcare, cramped living and working conditions, and even a reported lack of soap on some farms can put them at high risk of contracting the virus.

“Globally, we’re very dependent on migrants to fill up jobs that are absolutely essential to sustain our economies,” says Mohan Dutta, a professor who studies the intersection of poverty and health at Massey University in New Zealand. He adds that health authorities need to do more to protect them.

Singapore’s outbreak highlights what can happen if some of the lowest paid and most vulnerable people in society go unnoticed during the health crisis. After reporting single-digit daily caseloads in February, the island nation of 5.6 million now has the highest number of reported COVID-19 infections in Southeast Asia.

This month, cases began surging past 1,000 per day, and almost all the patients were migrant workers.

“The government was really focused on fighting COVID-19 on two battlefronts: community transmission and imported cases,” says Jeremy Lim, co-director of global health at the National University of Singapore’s Saw Swee Hock School of Public Health. “But it overlooked the vulnerabilities of this third front that’s now glaringly obvious to everyone.”

Singapore’s 1.4 million foreign workers make up about one-third of the country’s total workforce, according to government figures. Most of the low-wage workers are from India, Bangladesh, Myanmar, China and other countries.

“Everything you see as development, [like] the building sector, the marine sector—all this depends very, very much on migrant workers,” says Christine Pelly, an Executive Committee member of TWC2. “Their contribution permeates throughout society in a very necessary and essential way.”

Migrant workers, Dutta adds, are an invisible community in Singapore. Their dormitories are located on the outskirts of the city and on their rest days, they congregate in districts like Little India and Chinatown, where ethnic food shops and money remittances are located. Due to fear of losing their jobs, many do not complain about their living and working conditions.

“Not only are they unseen, but their voices are also unheard,” says Dutta. 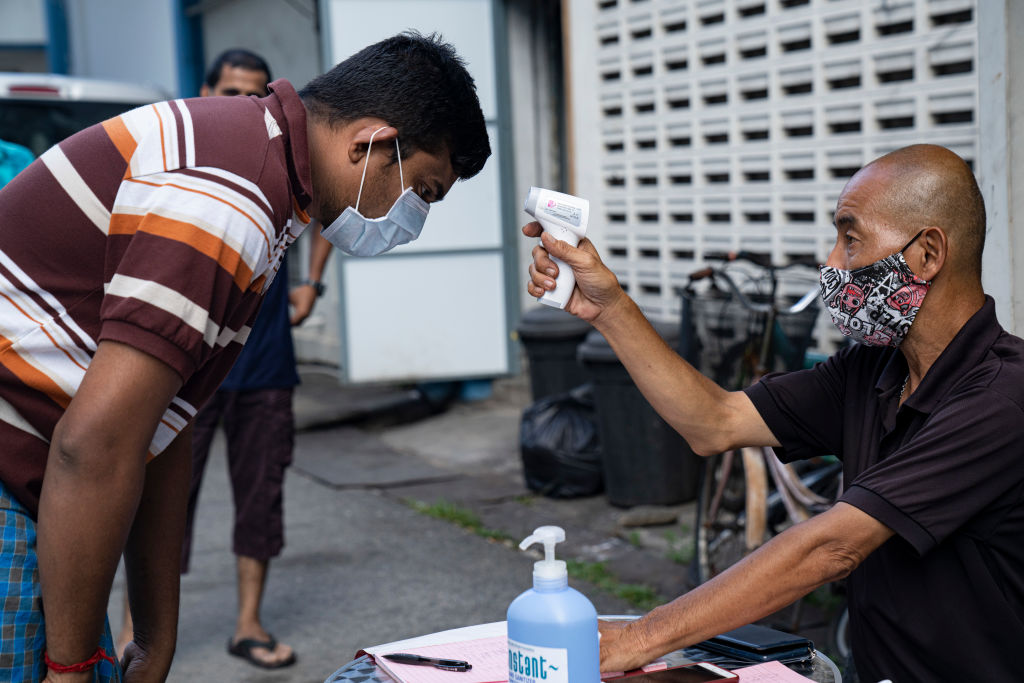 A migrant worker has his temperature checked by a security guard before leaving a factory-converted dormitory in Singapore on April 17, 2020.

TWC2 says it has spent years trying to call the government’s attention to the cramped and dirty dormitory conditions that now pose a grave public health threat. Government regulations stipulate that each occupant be allotted 4.5 square meters (about 48 square feet) of living space, meaning that rooms for 20 people can be as small as 960 square feet, while facilities like bathrooms, kitchens and common rooms are shared.

Some dorms now have hundreds of cases. One of them, the sprawling S11 complex, has over 2,200. Nizam, a 28-year-old Bangladeshi, moved out of S11 after his roommate tested positive earlier this month. He was transferred to a quarantine center.

“One hundred and seventy people share [a] common washroom, kitchen and the room where we eat,” the construction worker says. “Everything is shared. That’s why the virus is spreading like that.”

Besides the dormitories, rights groups have also sounded the alarm on the trucks that ferry migrants to and from work in the gleaming city center. Workers, usually about a dozen or more, are typically packed shoulder to shoulder in the open backs of lorries.

Singapore is scrambling to neutralize the ballooning crisis by locking down the dorms and trying to space out residents.

“This is Singapore’s largest humanitarian public health crisis ever. So the logistics of moving thousands of people, feeding and separating them is not at all straightforward,” says Lim, who also volunteers to help migrant workers.

Around 10,000 workers have been moved out of their dormitories and into vacant housing blocks and military camps. Medical personnel have been stationed at dorms to carry out “aggressive testing,” Prime Minister Lee Hsien Loong said in an April 21 address.

Dormitory residents have been instructed to stop working. The government has said employers must continue to pay their migrant workers during that period, and that testing and treatment will be free.

While workers are being provided three meals a day and free wifi, they are completely dependent on handouts. Workers TIME spoke with say they have not been allowed to leave their dorms, not even to buy groceries or other necessities.

Their treatment also contrasts with the four and five-star hotels that the government has paid to house Singaporeans returning from overseas, fueling criticism of further inequities.

Read more: The Coronavirus Is Hitting Our Nation’s Prisons and Jails Hard. And It’s Exposing a Crisis That Existed Long Before the Outbreak

A warning from Singapore

As migrant workers endure the brunt of Singapore’s outbreak, observers say the situation should serve as a reminder for other countries to pay attention to vulnerable residents, especially those for whom social distancing is a luxury.

“They need to be spread out, but they also need to have access to basic infrastructures like ventilation, clean toilets, adequate supply of water, adequate cleaning supplies,” says Dutta, the New Zealand professor.

Seeking to blunt the economic repercussions of the pandemic, many countries are now rushing to restart their economies. Several states in the U.S. have started reopening this week, while in Germany and France schools and businesses are making plans to resume.

But Dutta cautioned against loosening restrictions before ensuring vulnerable groups have access to basic sanitation and decent accommodation. Infections among marginalized communities, if not properly contained, could increase the risk for the entire population, he warns.

“Inequalities are the breeding grounds for pandemics,” he says. “Countries absolutely have to learn [from Singapore] before it’s too late.”

Please send tips, leads, and stories from the frontlines to [email protected]

Trump, Eager To Restart The Economy By May, Says He ‘Won’t Pressure’ Governors | Deadline | MSNBC

What is Antifa? | News