Trump to wind down US coronavirus taskforce: Live updates | News

The Disneyland theme park in Shanghai will reopen on May 11 under “enhanced health and safety measures,” the company said.

Only limited attendance will be allowed initially, and visitors will need to book tickets and make reservations in advance.

Social distancing will be maintained in lines for amenities, in restaurants, on rides and other facilities and sanitisation and disinfection will be boosted, the company said in a news release.

Taiwan’s health minister asked the World Health Organization (WHO) to ensure the island had access to first-hand information about the coronavirus, saying that not having the full picture slows down epidemic-prevention work.

foreigners are still banned from entering the country as China works to contain infections being brought in from overseas.

China, which considers the island one of its provinces, objects to Taiwan’s membership and the exclusion from WHO has infuriated Taipei.

“For Taiwan, what we want is first-hand information. Any second-hand information slows down any actions we take, and distorts our judgement about the epidemic, like we’re unable to see the woods for the trees,” Health Minister Chen Shih-chung said.

06:00 GMT – Germany to reopen shops and schools in May: draft agreement

Germany will fully reopen shops and schools in May after weeks of shutdown imposed to control the spread of the coronavirus, according to a draft agreement between Chancellor Angela Merkel and regional premiers.

“Even after initial steps to open up were introduced from April 20, the number of new infections remained low,” the document read, with “no new wave of infection” so far detected – justifying the new measures.

05:44 GMT – Chinese students back to school in Wuhan

More than 120 schools reopened in the Chinese city of Wuhan, the original epicentre of the new coronavirus, for nearly 60,000 senior school students after being closed for more than three months because of the pandemic

Wednesday’s back-to-school was the latest step in a gradual normalising of life in Wuhan and surrounding Hubei province. 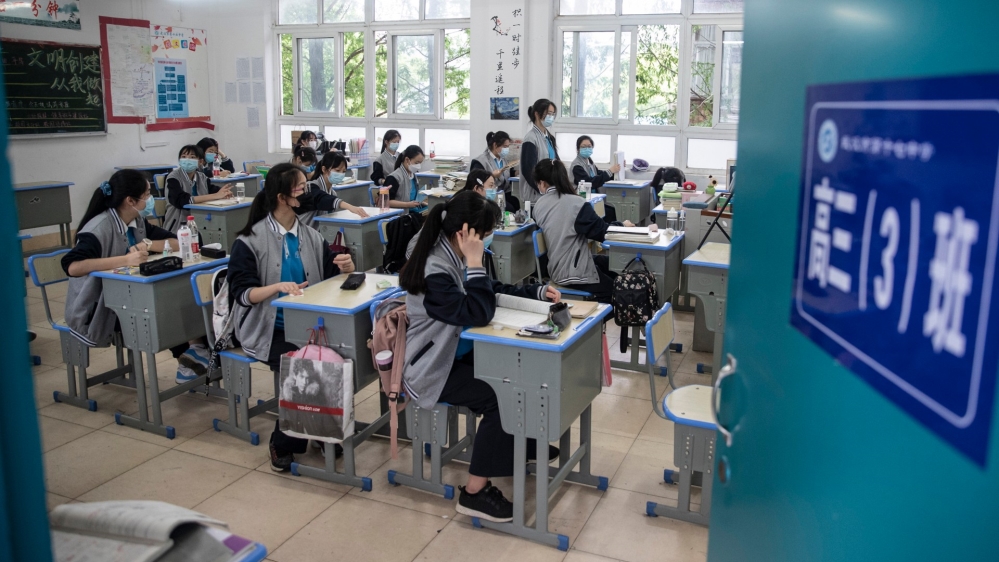 Al Jazeera’s Katrina Yu, reporting from the capital, Beijing, said: “Many schools still remain closed, particularly primary schools are still closed and also younger high school students are still not able to attend classes. These students we’re seeing going into class are the oldest high school students and they have been prioritised because they have to prepare for their university entrance exams.”

Hello, this is Saba Aziz in Doha, taking over the updates from my colleague Kate Mayberry.

05:15 GMT – Indonesia’s president tells ministers to use ‘whatever means’ to control outbreak

Indonesia’s President Joko Widodo has told his ministers to use “whatever means” necessary to bring the country’s coronavirus outbreak under control and ensure the infection curve comes down in May.

“I ask that you exert all of your energy and concentrate on efforts to control COVID-19 and its impact,” Widodo said during a cabinet meeting that was broadcast on local television.

The country reported 484 new cases on Tuesday – the highest single daily increase since the outbreak began. Indonesia has confirmed a total of 12,071 cases – the highest in Southeast Asia after Singapore.

Hong Kong’s Department of Health has issued 103,543 quarantine orders to people arriving in Hong Kong from mainland China, Macau and Taiwan, and 69,685 to those arriving from other countries and territories, Sophie Chan, Hong Kong’s food and health secretary told the Legislative Council on Tuesday.

She said the government had “zero tolerance” for those who tried to evade the orders and had conducted 14,000 spot checks on those in quarantine.

Four people who violated the orders were each sentenced to prison terms ranging from 10 days to three months by magistrates’ courts, she said. Some 56 people who left their dwelling places before the expiry of their quarantine orders had been stopped at the border and were under investigation.

Neil Ferguson, the Imperial College epidemiologist whose modelling of the outbreak helped shape the British government’s response to the coronavirus, has resigned after it was revealed he breached lockdown guidelines.

Ferguson stepped down after The Daily Telegraph reported that he had broken the rules a month ago to meet his partner.

The professor was a member of the Scientific Advisory Group for Emergencies (SAGE).

“I accept I made an error of judgement and took the wrong course of action,” Ferguson said in a statement. “I have therefore stepped back from my involvement in SAGE.”

Germany has released the latest data on its coronavirus outbreak.

The Robert Koch Institute for infectious diseases says the number of confirmed cases rose by 947 to 164,807.

French drugmaker Sanofi says it plans to enrol thousands of people across the world in trials of an experimental coronavirus vaccine it is developing with Britain’s GlaxoSmithKline (GSK).

Sanofi Pasteur executives told Reuters the company hopes to start the trials in September and will be testing the vaccine on larger numbers of people to secure stronger data sooner. Late-stage trials comparing the vaccine with a placebo are expected to take place at the end of this year or early 2021.

Suifenhe, a Chinese town on the country’s northeastern border, is loosening coronavirus restrictions that were introduced after a surge in cases among travellers returning from Russia, according to the Global Times.

China’s National Health Commission says the mainland had two new cases of coronavirus on Tuesday and 20 new asymptomatic cases. No deaths were recorded.

The two new cases were in people who had travelled outside China.

South Korea’s baseball season has resumed to the sound of empty stadiums.

Al Jazeera’s Rob McBride says players have to abide by certain rules in order to play, and it will be some time before fans are allowed back into stadiums.

US President Donald Trump will wind down the government’s coronavirus taskforce as his focus shifts towards opening the economy.

Trump said Anthony Fauci and Deborah Birx, the two senior medics who took prominent roles in the taskforce, would remain as advisers.

“We can’t keep our country closed for the next five years,” Trump said when asked why it was time to wind down the taskforce. The taskforce had done a “great job”, he said during a visit to a factory making personal protective equipment, but the focus now was “safety and opening”.

More than 70,000 people have died from coronavirus in the US, more than anywhere else in the world. 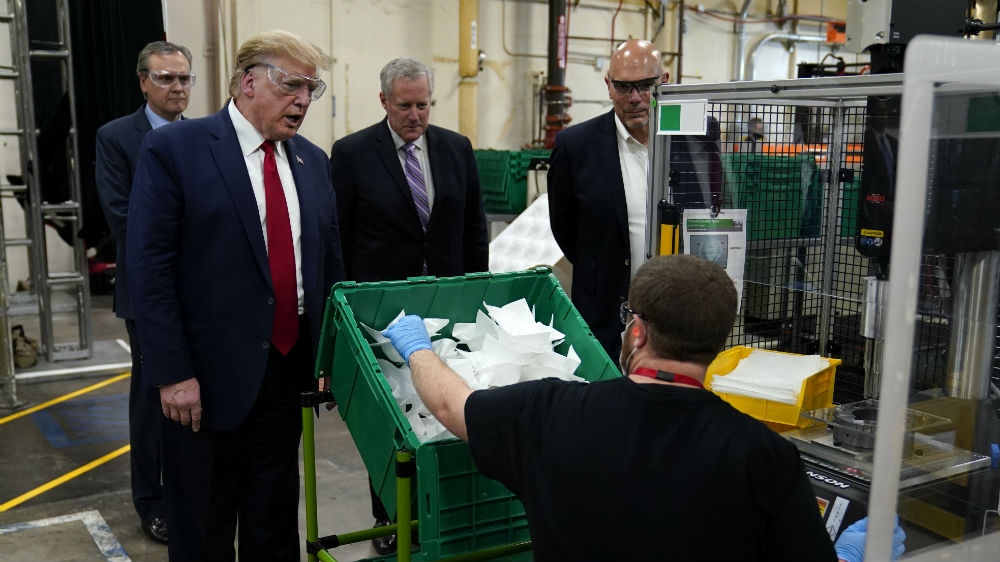 Trump during his visit to a factory making personal protective equipment, including masks [Evan Vucci/AP Photo]

Read the updates from yesterday (May 5) here.

How Governments Broke the Oil Market

How Opposition Parties In 3 Countries Are...