Here are all the latest updates:

A fire at a Moscow hospital treating people infected by the new coronavirus has killed one patient and forced the evacuation of about 200 others.

News reports said the fire at the facility in the northern part of the city has been extinguished.

Mayor Sergei Sobyanin confirmed reports that a patient had died and said those evacuated would be transferred to other hospitals. It was not clear how many of the evacuees were suffering from COVID-19.

South Korea’s President Moon Jae-in urged citizens not to lower their guard, but said there’s no reason to panic amid worries of a new surge in coronavirus cases in the country.

“The infection cluster which recently occurred in entertainment facilities has raised awareness that, even during the stabilization phase, similar situations can arise again anytime, anywhere in an enclosed, crowded space,” he said, referring to a slew of new cases linked to Seoul’s nightclubs.

“We must never lower our guard regarding epidemic prevention.”

There was no reason to panic, he said, adding that South Korea has “the right quarantine and medical systems combined with experience to respond quickly to any unexpected infection clusters that might occur”.

Dr Anthony Fauci, leading member of White House’s coronavirus task force, has placed himself in quarantine after contact with someone who tested positive for COVID-19.

The director of the US’s National Institute of Allergy and Infectious Diseases tested negative for COVID-19, according to the institute, and will continue to be tested regularly.

It added that he is considered at “relatively low risk” based on the degree of his exposure, and that he would be “taking appropriate precautions” to mitigate the risk to personal contacts while still carrying out his duties.

While he will stay at home and telework, Fauci will go to the White House if called and take every precaution, the institute said. He is the third member of the White House coronavirus task force to place themselves in self-quarantine in recent days.

South Korea has reported 34 additional cases of COVID-19 over the past 24 hours as a spate of transmissions linked to clubgoers threatens the country’s hard-won gains in its fight against the virus.

The Korea Centers for Disease Control and Prevention said a tentative assessment showed 26 of the 34 new patients were locally transmitted cases, while the rest were imported.

The Yonhap news agency said it was the first time that South Korea’s cases rise above 30 in about a month. 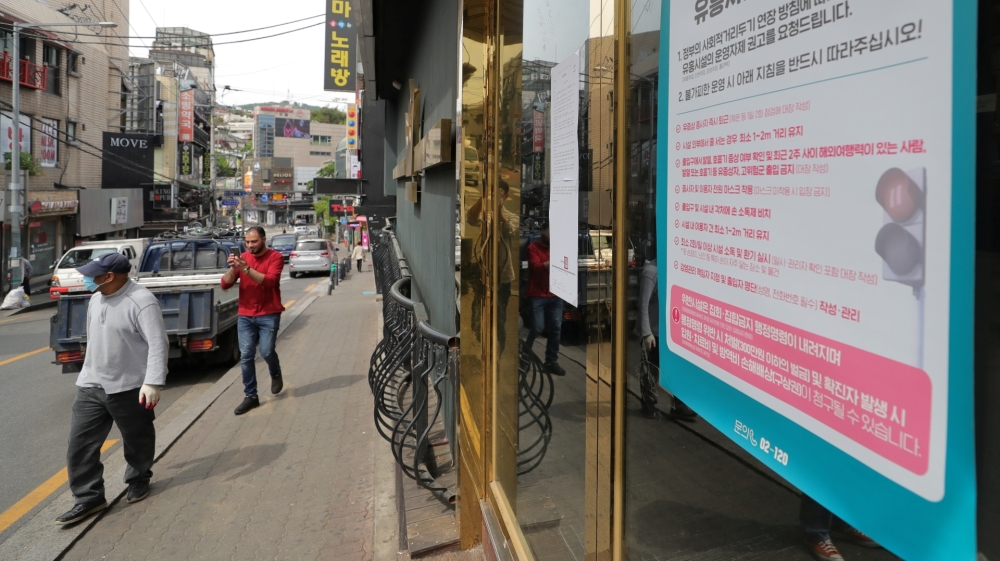 A list of precautions to prevent the spread of COVID-19 at the entrance of a club in Seoul, South Korea [Yonhap via Reuters]

Most of the new cases in the past few days were linked to nightclubs in Seoul’s Itaewon entertainment neighbourhood.

The KCDC has also urged visitors of those clubs to self-isolate to limit the possible spread of the virus, according to Yonhap.

China has reported its first double-digit rise in new rises cases in 10 days on Sunday, saying 14 new cases had been detected, 12 of them domestic infections and two brought from abroad.

Eleven of those domestic cases were in the northeastern province of Jilin and 1 in Hubei province, whose capital Wuhan is considered to have been the original epicentre of the global pandemic.

Jilin shares a border with North Korea, where the virus situation is unclear.

A US trade group representing major airlines says its members support having the government do temperature checks of passengers as long as necessary during the coronavirus crisis.

Airlines for America said the checks would add a layer of protection for passengers as well as airline and airport employees.

The association said passenger screening is the responsibility of the Transportation Security Administration.

“Having temperature checks performed by the TSA will ensure that procedures are standardised, providing consistency across airports so that travelers can plan appropriately.”

One case was linked to a facility for older people, while the second involved a traveller from overseas.

Today we again have 2 new cases of #COVID19 to report in New Zealand. For full details, read the full release at https://t.co/abkrd7GnpS

01:27 GMT – One-third of all US coronavirus deaths linked to nursing homes

At least 25,600 residents and workers have died from the coronavirus at nursing homes and other long-term care facilities for older adults in the US, according to a New York Times database.

Two cabinet-level US officials are in self-quarantine after coming into contact with someone who had tested positive for COVID-19, according to a spokesman and a media report.

Robert Redfield, the director of the Centers for Disease Control and Prevention, “will be teleworking for the next two weeks” after a “low-risk exposure” on Wednesday to a person at the White House who has the disease, the Washington Post reported, citing a spokesman.

Stephen Hahn, US Food and Drug Administration commissioner, is also in self-quarantine for the next two weeks after coming into contact with someone who tested positive for COVID-19, an FDA spokesman told Reuters late on Friday.

Hahn immediately took a diagnostic test for the coronavirus and the results were negative, the FDA said.

The death toll from the coronavirus pandemic in Brazil has surpassed 10,000, according to figures from the Ministry of Health.

There are now 10,627 deaths and 155,939 confirmed cases recorded in the country, but scientists think the real toll could be 15 or even 20 times worse, given the country’s inability to carry out widespread testing.

After Brazil surpassed the 10,000 deaths mark, the National Congress decreed an official mourning period of three days and asked Brazilians to follow health authorities’ recommendations to reduce infection rates while the country prepares for “a safe and definitive return back to normal”.

Tesla CEO Elon Musk has threatened to pull the company’s factory and headquarters out of California and sued local officials who have stopped the company from reopening its electric vehicle factory.

In a lawsuit filed in federal court, Tesla accused the Alameda County Health Department of overstepping federal and state coronavirus restrictions when it stopped Tesla from restarting production at its factory in Fremont. The lawsuit contends Tesla factory workers are allowed to work during California’s stay-at-home order because the facility is considered “critical infrastructure”.

“Frankly, this is the final straw,” Musk tweeted. “Tesla will now move its HQ and future programs to Texas/Nevada immediately.”

He wrote that whether the company keeps any manufacturing in Fremont depends on how Tesla is treated in the future.

Alameda County said on that it has been working with Tesla to develop a safety plan that “allows for reopening while protecting the health and well-being of the thousands of employees” who work at the factory and that it looks forward to coming to an agreement on a safety plan very soon.

But Fremont Mayor Lily Mei expressed concern about the potential economic implications of continuing the shelter-in-place order without provisions for manufacturers such as Tesla to resume. Mei urged the county to work with businesses on “acceptable guidelines for reopening”.

Go here for all the updates from yesterday, May 9.

Global Cybersecurity Governance Is Fragmented – Get...

For A Billion Indians, The Government’s Voluntary...

Coronavirus bailouts: Which country has the most...