In March, as Europe was in the grip of the first outbreak of the Covid-19 pandemic, Serbian president Aleksandar Vucic kissed the Chinese flag and hailed Beijing for its support in fighting the coronavirus. Six months later, he met Donald Trump at the White House — and publicly backed an idea to rename a lake after the US president.

The endorsement came on the heels of a delegation of US officials representing six federal agencies as well as the president’s Balkans envoy Richard Grenell, who was the first to suggest a lake named after Trump.

Serbia had “opened the doors of Washington, which were closed for us for the last 30 years,” Mr Vucic told the Financial Times in an interview in Belgrade.

The US diplomatic push is unprecedented in recent Serbian history: while Chinese president Xi Jinping visits at least once a year, the last time a US president visited Belgrade was for the funeral of Yugoslavia’s strongman, Josip Broz Tito in 1980. It underlines Washington’s intensifying courtship of a small but pivotal country in the EU’s hinterland, whose economy has become increasingly intertwined with that of China.

Serbia is one of the main hubs for Beijing’s Belt and Road Initiative, Mr Xi’s ambitious and controversial corridor designed to facilitate the transport of its goods to European markets. Serbia is on a juncture between the Greek port of Piraeus, owned mostly by China’s Cosco, and ports in Germany and the Netherlands. The mountainous country of 7m is attractive to Beijing as the Balkans’ biggest economy, and is seen as having the best chance in the region to join the EU in the coming decade, despite problems with rule of law and media freedom.

In the wake of a “strategic partnership” agreement between Belgrade and Beijing in 2009, Serbia has received so much investment that the Center for Strategic and International Studies recently warned that the country risked “becoming a Chinese client state”.

These investments include a big copper mine in the eastern city of Bor and a steel mill in the central town of Smederevo. Belgrade also partners with Huawei on a “Safe Cities” project to provide 1,000 facial-recognition cameras, and recently made Europe’s first purchase of Chinese-made FK-3 surface-to air missiles and armed drones.

Meanwhile, ties with Washington have been fraught since the 1999 US-led Nato bombing of Yugoslavia, an 11-week campaign that forced Serb forces to retreat from Kosovo province, which is 90 per cent populated by Albanians. The Chinese embassy was destroyed and three Chinese citizens were killed (A Chinese cultural centre is now being built on the site). In 2008, when Kosovo declared its independence, hooligans set fire to the US embassy.

Now Mr Grenell has pledged to help rebuild the former ministry of defence building and general staff headquarters. Approval of the US had risen in public opinion polls, he noted, though China was still more popular. “This administration (Trump) did not bomb Serbia,” Mr Vucic said.

Since coming to power in 2014, Mr Vucic has pursued a course not dissimilar to that of Tito’s non-alignment during the cold war. But such a balancing act is increasingly difficult given the escalating animosity between Beijing and Washington.

After a mid-September Oval Office ceremony, during which Serbia signed letters of intent pledging more co-operation with Kosovo, Mr Trump claimed falsely that he had stopped “mass killings” between Serbia and its breakaway province. In fact, Belgrade and Pristina recommitted to promises made under the auspices of the EU. 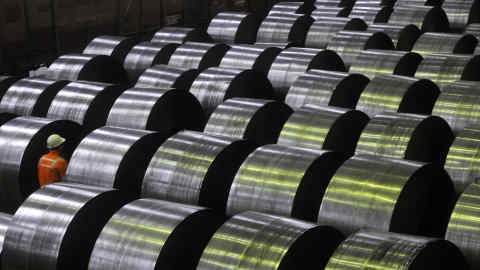 The summit’s real effect was a “sea change between the US and Serbia”, said Adam Boehler, chief executive of the US International Development Finance Corporation, the US government’s international development agency.

At the White House, Mr Vucic agreed to “prohibit the use of 5G equipment supplied by untrusted vendors”. The clause was perceived as a reference to Huawei, a partner of Belgrade in several projects.

“It is unheard of for there to be any daylight between the Chinese and the Serbians”, one western diplomat remarked.

Mr Vucic’s first meeting following his return from Washington was with the Chinese ambassador, who insiders say was “livid”. The following week, prime minister Ana Brnabic attended the opening of Huawei’s centre for digital innovation and development in Belgrade.

Mr Vucic was adamant it would be possible for Belgrade to continue maintaining close ties with Beijing while deepening relations with Washington.

“I am proud that Chinese people and a Chinese company supported us with the steel mill, but I am very proud of our arrangement with the Americans as well,” he said.

He was referring to the Smederevo investment that gave rise to the moniker “Steel Friendship”. In 2012, US Steel sold the plant to the Serbian state for $1. In 2016, China’s Hesteel bought it for €46m, pledging to invest $300m and keep 5,000 workers.

The political support is mutual: Beijing backs Belgrade by refusing to recognise Kosovo, and in return a senior Serbian official lauded China’s repressive minority policy in Xinjiang. Mr Vucic’s party, which won a landslide victory in June elections, could easily pass sweeping legislation in parliament to bar Huawei from receiving a 5G licence before the auction next year.

Serbia has become a pawn in the continuing trade war between great powers but could still emerge a winner, says its president. “If that pawn will reach the eighth row, becoming a queen, that’s the real job I want to deliver to the Serbian people,” said Mr Vucic.

Women Of The World Stand Up To The Pandemic : Goats and Soda : NPR

AI and jobs: Evidence from US vacancies

Something Remarkable Just Happened This August: How...