Sushant Singh Rajput has always been an actor to look out for. His dedication and sincerity even when he was doing films back was appealing. Kai Po Che underlined the fact that TV face or not, he can hit his critics out for a six when it comes to delivering believable performances. A cricket fan himself, he went on to play one of India’s best cricket captains, MS Dhoni, on the big screen. His last performance in Chhichhore saw him playing a concerned father troubled with the fact that his son tried to commit suicide due to exam pressure. The news of his untimely demise has come to a shock to us all. In his remembrance, we present a list of some of the best films of his career, tragically cut short by death.

Ishaan (Sushant Singh Rajput), Govind (Rajkummar Rao) and Omi (Amit Sadh) are friends who, like all normal young people, want to do something different. Ishaan is a talented cricketer and hence the trio decided to open a cricket coaching academy plus a sports shop. The seed money is provided by Omi’s uncle, who is a political henchman in a Hindu right-wing party. They discover a talented Muslim youngster who has all the trappings to becoming a cricket star. Ishaan becomes obsessed with mentoring him, Govind is only interested in expanding his business and Omi gets embroiled in the political schemes of his uncle. Whether their friendship stands the test of time forms the crux of the story. Sushant Singh’s character Ishaan was the catalyst in the film. SSR brought in lots of sensitivity as well as sincerity to the portrayal and made you root for Ishaan. 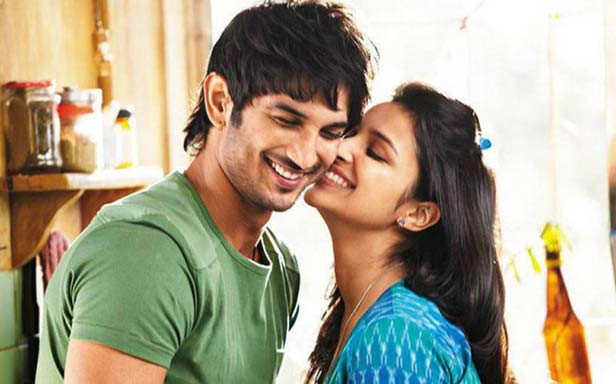 Ragu (Sushant Singh Rajput) who is not sure about settling down, is about to get married to Tara (Vaani Kapoor) but leaves her at the altar and falls for English teacher Gayatri (Parineeti Chopra) who attends weddings as a baraati for subsidiary income. They both are commitment-phobic and yet live happily as a couple without getting married. Things change when Raghu’s path crosses with Tara again. He falls in love with her as well. The film portrayed a true picture of a confused generation who have yet to understand the intricacies of love and commitment. They’re game for hookups and baulk at marriage. Sushant played a clueless youngster with natural ease and won a lot of admirers for his performance. 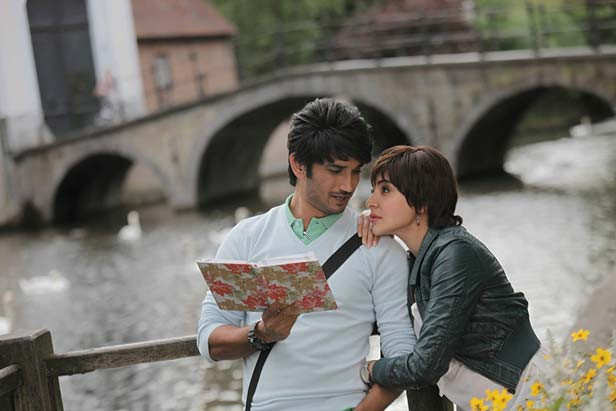 Pk is surely a unique never-before-seen product to have come out of Indian cinema. It stars Aamir Khan as an alien called PK who gets stranded on earth and is fascinated with everything around him. PK takes a keen interest in Indian customs and religions and his observations make people confront absurdities that lie within our common beliefs and practices. Anushka Sharma who plays a journalist called Jagat Janani in the film is shown to be in love with the like-minded Pakistani national played by Sushant Singh Rajput. Jagat Janani helps PK come into the limelight and ultimately helps him find his remote so he can contact people from his planet and get back home. SSR didn’t have much to do in the film and yet floored you with the natural ease with which he portrayed his character who is obsessed with Indian films and culture despite being a Pakistani national. 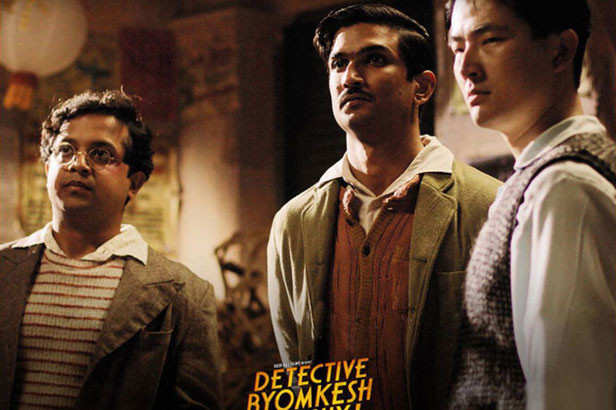 Based on the fictional detective Byomkesh Bakshi created by the Bengali writer Sharadindu Bandyopadhyay, Detective Byomkesh Bakshy! is a blast indeed. It’s based on the first few adventures of the fictional detective. Set in Kolkata during the WWII era, it pits Byomkesh against an evil genius who is out to destroy the world. The art direction was excellent and the costume department too outdid itself. Sushant submerged himself in his character and gave a credible performance as Byomkesh. Strangely, the film didn’t do well as expected at the box office despite everything going for it. 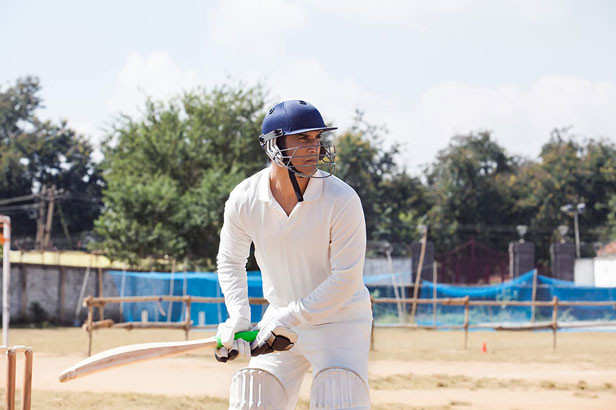 This one is surely the pinnacle of Sushant’s career. MS Dhoni is one of our most successful cricketers. Not only has he been known for his prowess with the bat, but he’s also admired for his lightning-fast wicket-keeping abilities as well. He is the only captain in the history of Cricket to win all ICC trophies. Under his captaincy, India won the 2007 ICC World Twenty20, the 2010 and 2016 Asia Cups, the 2011 ICC Cricket World Cup and the 2013 ICC Champions Trophy. His biopic, M.S. Dhoni: The Untold Story, chronicled his life and cricketing career up to the Indian team’s win at the 2011 Cricket World Cup. Former wicketkeeper Kiran More personally coached Sushant Singh Rajput, for thirteen months, in both wicket-keeping and batting before the filming began and did a brilliant job of being Dhoni 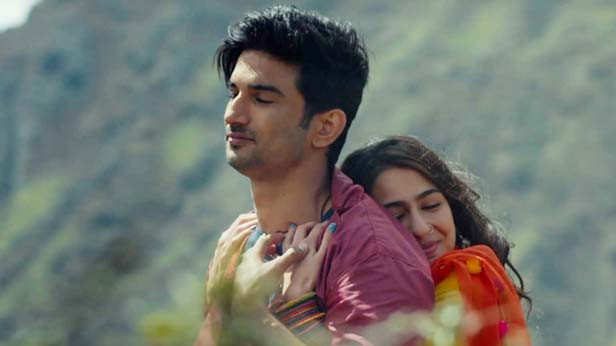 Kedarnath is a slow burner, where love germinates over many a ride up and down a mountain. Mukku (Sara Ali Khan) is the younger daughter of a priest who also runs a shop and a guest house and needs a pithoo — porter — to cart her up and down. Mansoor (Sushant Singh Rajput) happens to be Muslim but has lots of faith in Lord Shiva as it’s thanks to the Shiv temple at Kedarnath that he’s able to earn money as a porter. He’s an affable man prone to giving discounts to his clients and posing for selfies with them. Their common love for cricket leads to a chance meeting and a smitten Mukku later hires him for the whole month. She bares her heart to him and he amusedly listens and slowly, they fall in love. But there are complications. Mukku is betrothed to someone else. She’s emotionally blackmailed into marrying the guy but nature intervenes before the marriage is consummated. A huge flood, coupled with cloudburst envelopes the valley. Mukku and her father take refuge in the temple, which is the only structure left standing. Mansoor comes to their rescue at that point of time and their love and faith gets tested once more. Sushant’s chemistry with Sara worked in the film’s favour. He totally looked like a porter in the film. 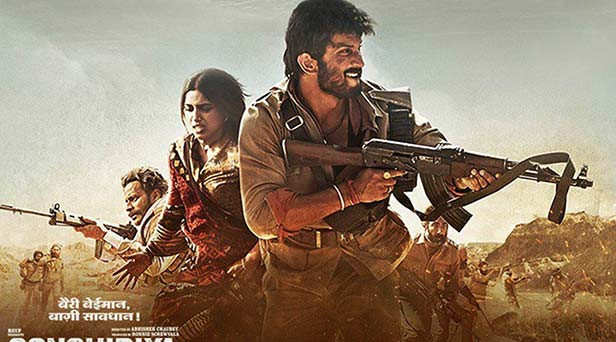 Sonchiriya offers a potent blend of dacoit drama, karmic lesson and caste politics with some realistic action thrown in for good measure. Set in the ’70s during the Emergency era, Sonchiriya is a story based in Chambal, which has long been the favourite playing field of directors wanting to channel their inner Sergio Leone and whip up a curry Western. Maan Singh (Manoj Bajpayee), is the leader of a merry band of dacoits, only they call themselves baaghi (rebel). Their rebellion exists at an existential level, as more often than not they are men running away from themselves, from their circumstances. Lakhna (Sushant Singh Rajput) and Vakil (Ranvir Shorey) are his trusted lieutenants. Virender Gujjar (Ashutosh Rana), a policeman has a personal vendetta against them and has vowed to kill them come hell or high water. Their lives take a turn when they help a woman (Bhumi Pednekar), who had stumbled into Chambal carrying a sick girl. Nothing is what it seems and various interpretations of truth come tumbling out as the narrative goes back and forth in time. It was a huge gamble for Sushant to play a dacoit in this period film. While it didn’t do well at the box office, the film won lots of critical acclaim and awards. 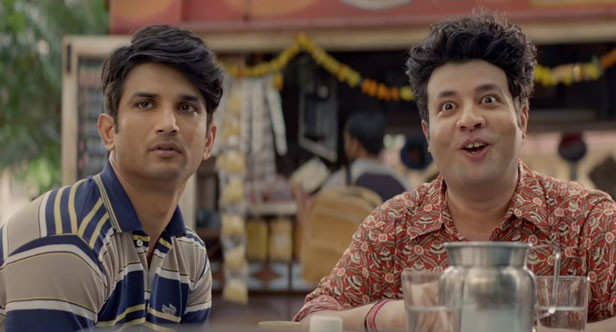 It’s a campus comedy/ romance at one level but tackles the serious problem of student suicide on the other. Annirudh (Sushant Singh Rajput) called Anni by his friends and Maya (Shraddha Kapoor) are a divorced couple. Their lives turn topsy turvy when they learn that their young son Raghav has tried to commit suicide. Annirudh feels that narrating stories from his own college days might help his son recover mentally. It was during college that he fell in love with Maya, and formed life-long friendships with the likes of Sexa (Varun Sharma), Derek (Tahir Raj Bhasin), Acid (Naveen Polishetty), Mummy (Tushar Pandey), Bevda (Saharsh Kumar Shukla), and others. As the friends regroup in order to be with Anni and Maya in their time of need, distance and time fades away to reveal a treasure trove of memories. Sushant played a caring dad in his older avatar and as a happy-go-lucky student in his younger avatar and won plaudits for both.