Many were in floods of tears as they watched her goodbye, feeling sad this was the last we would see of her.

But others couldn’t believe that was it and said they were ‘disappointed’ and it was ‘anticlimactic’.

For some, the fact Georgie’s true love, Elvis, didn’t return from the dead was just too much to bear.

What happened the final episode for Michelle Keegan in Our Girl?

In fact, Georgie got what seemed like a happy ending as she finally let Elvis go after confronting his killer.

The medic came face to face with warlord Omar, the man who had lured Elvis into the trap that killed him.

But then it was revealed who they thought was Omar wasn’t actually him at all – in fact, Afghanistan soldier Rabee was Omar! 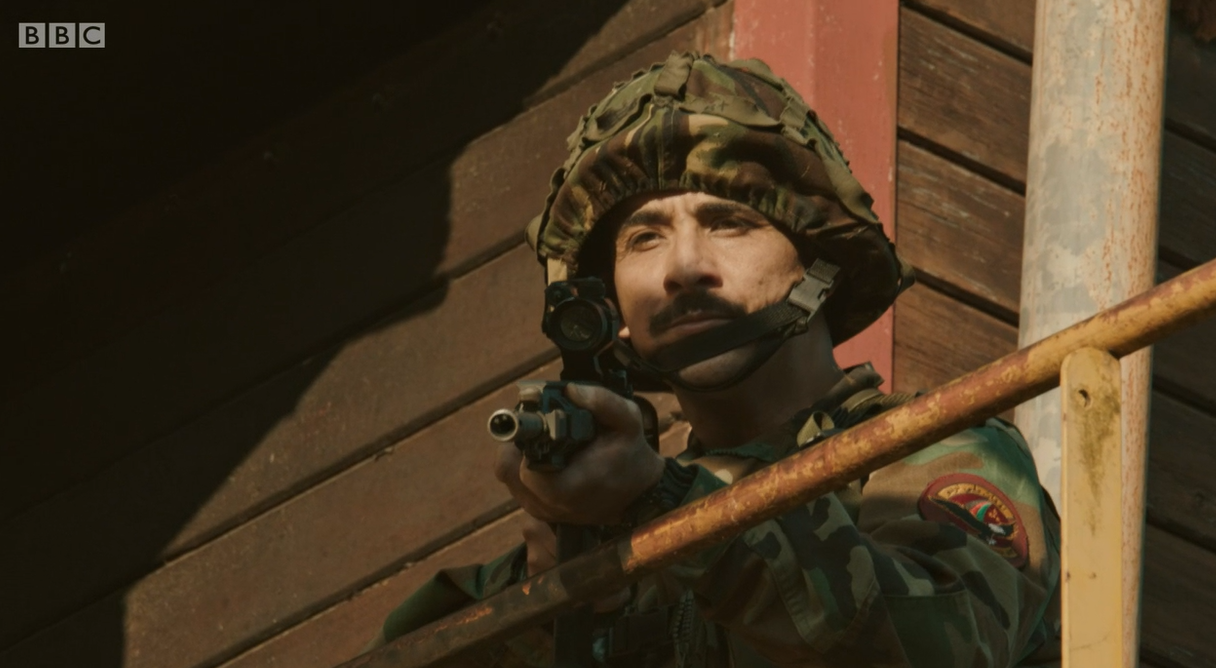 He attempted to shoot Georgie, but Prof jumped in front of the bullet to save her and she then shot Omar.

Although she had the oportunity to avenge Elvis’s death and finish Omar off, as he begged her to kill him, Georgie said: “Where’s the justice in that?” and punched him before leaving him to be dealt with by the authorities.

Her last scenes saw the sparks of a romance with Prof as he helped her finally say goodbye to Elvis.

Georgie tied her engagement ring to a kite and sent it flying into the air with Prof beside her. 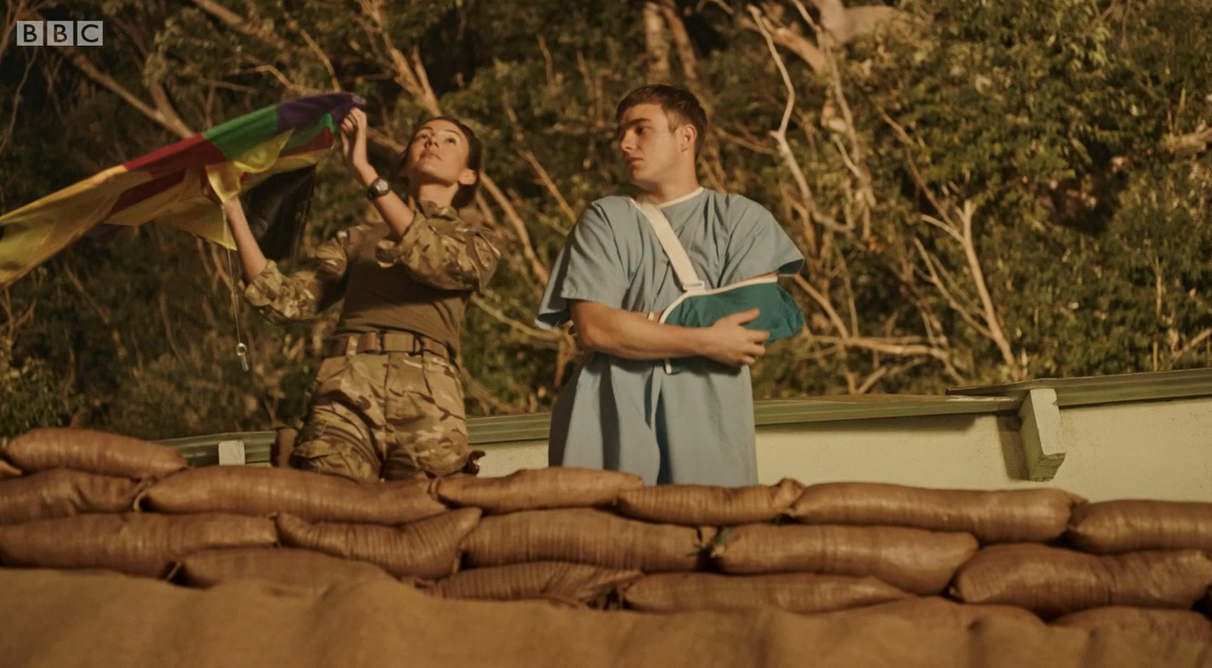 He recited a poem as the kite soared and Georgie asked: “Is that some clever way of asking me out for a drink when we get back home?” 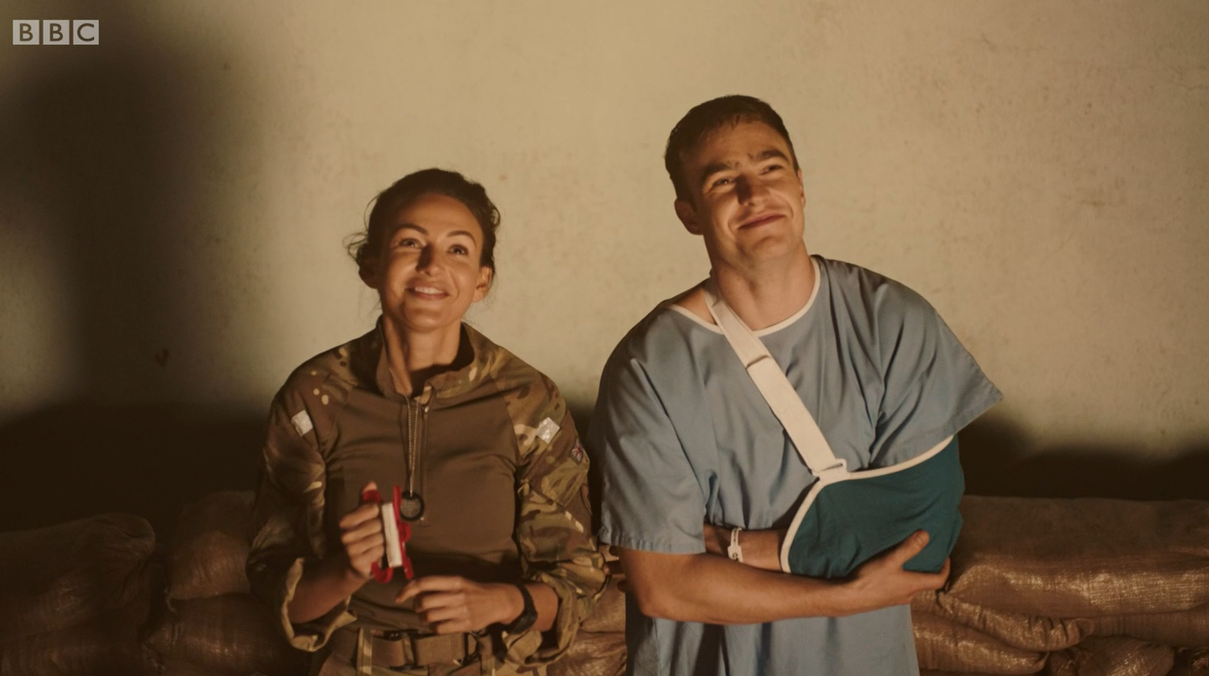 And teased a future romance with Prof (Credit: BBC)

But fans won’t get to see whether their romance goes the distance as these were the final scenes for Michelle as Georgie.

Some viewers thought the ending was perfect and so deserved because of all Georgie had been through.

Cried all evening at #OurGirl. Georgie’s happy ending really got me

#OurGirl absolutely epic end…so pleased I could cry…kudos to the cast and crew…I absolutely loved it..prof and Georgie, Throbber & Mimi possibly , Little Fingers, kingy and hurst, and the friendship between monk &Throbber(he’s made a new friend)..Def watch again @BBCOne

Just watched the last #ourgirl and what a finale!!! @michkeegan at her very best!! Glad Georgie got closure, and glad the good guy, Prof, got a happy ending!! Sad it’s over!!

Beautiful ending to this series… I hope Georgie can finally have some happiness. Going to miss her, @michkeegan has been amazing to watch, thank you!❤️#OurGirl

Others weren’t impressed, feeling it was a bit lacklustre.

One suggested she needed to die, and another said it wasn’t a ‘proper’ exit and felt it had been ‘ignored’.

#ourgirl Finale : little disappointed in the not so explosive and epic exit of Georgie Lane. Doesn’t feel like she is leaving ! They better give a god damn good excuse why Lane won’t be in season 5 ! And there better be a season 5 !

I didn’t mind the Georgie and Prof ending. Hope for the future. But the rest was so anti climatic. It wasn’t an ending for anyone and so many questions #OurGirl

Left slightly unimpressed with the season finale #OurGirl would have liked Georgie to announce baby fingers to the whole squad, but more importantly I would have liked Elvis to have been alive

I think as Michelle isn’t returning she should have died at the end. Love, love, love Georgie, but I just think it would have been a good ending with her meeting Elvis in heaven. For me either that or she went to live in America with Antonio. Needed a proper ending #OurGirl

Think I’m the only one that wanted more from the final episode of #OurGirl great that Georgie got justice for Elvis and there will be a baby fingers but that was the last episode for Michelle Keegan I thought we would have a proper goodby to Georgie Lane.

Surely that cant be the end for @michkeegan in Our Girl please tell me you’ve changed your mind! There is so many unanswered questions from that ep! What happened to Omar? is Poya dead? Will Prof and Georgie get it on? And we NEED to see Fingers baby like now!!! #OurGirl xx

Please don’t tell me they are going to ignore #Georgie leaving just like they did to #CaptainJames #OurGirl Wasn’t impressed with the last episode Great middle this season!

Many were still heartbroken that Elvis didn’t return from the dead and reunite with Georgie.

i’m glad that georgie was able to get closure in the final episode but it kills me that she never got her true happy ending with elvis. her soulmate, the person she was meant to spend the rest of her life with. she deserved so much better #ourgirl pic.twitter.com/3E6INhxPQT

So Elvis really is dead?

There’s no Georgie and Elvis reunion and no Georgie singing She Moves In Her Own Way in the kitchen while she does the dishes in his shirt.

Just wanted Elvis to be alive, return to Georgie and for the final scene to be at their wedding with she moves in her own way playing was that too much to ask?? #OurGirl

Michelle announced she would be leaving the show after three series at the start of this year because she wanted to look for other roles.

She told The Sun: “I’ve had the most incredible four years on the show and I want to thank the BBC for giving me such an amazing opportunity.

“Playing Georgie has been a life-changing role for me. I’ve loved every second of the adventure so it was a very hard decision to make not to return.

“I feel it is the right time to explore other exciting opportunities but I’m so happy to be part of the new series coming soon so it’s not the end just yet.”

After her final farewell, Michelle added a video to her Instagram about her journey over the last four years.

“Stand down soldier,” she wrote as she went on to thank everyone involved for the experience.

What did you think of Michelle’s final episode? Leave us a comment on our Facebook page @EntertainmentDailyFix and let us know what you think of this story.

Why You Cough After Exercising, Especially Running

10 Young Adult novels you should read...