Nearly 10,000 prison inmates have been released in the Philippines as the country races to halt coronavirus infections in its overcrowded jails, a Supreme Court official said.

The move follows a directive to lower courts to release those awaiting trial in prison because they could not afford bail, Associate Supreme Court Justice Mario Victor Leonen told reporters.

“The court is very much aware of the congested situation in our prisons,” Leonen told reporters as he announced the release of 9,731 inmates.

Yurianto also reported 31 new deaths, taking the total number of fatalities to 831. The number of people who have recovered from COVID-19, the disease caused by the coronavirus, rose by 74 to 1,665, he said.

The country has tested more than 79,800 people for the virus, he said.

Malaysia reported 105 new coronavirus cases, bringing the total number of infections in the country to 6,176.

The number of deaths remained at 103.

Russia reported 9,623 new cases of the coronavirus, its highest daily rise, bringing the total to 124,054.

The Philippines said it has recorded 156 new cases of the novel coronavirus and 24 more deaths, bringing the total number of infections in the country to 8,928 and the fatalities to 603.

It also said that 40 more individuals had recovered from infections, bringing the recoveries to 1,124.

The number of confirmed COVID-19 cases has surpassed 40,000 across Africa, including nearly 1,700 deaths and more than 13,000 recoveries, accoding to Africa CDC.

At least 53 African nations have confirmed the new coronavirus infections.

Most of the new cases are among migrant workers living in dormitories, the ministry said.

The Indian government said the world’s biggest coronavirus lockdown will be extended for two weeks beyond May 4, but with some easing of restrictions.

The home ministry said in a statement that in view of “significant gains in the COVID-19 situation”, areas with few or no cases would see “considerable relaxations”.

The stringent restrictions have been credited with keeping confirmed cases of coronavirus to about 37,000 cases, with 1,223 deaths.

About two percent of Moscow residents – or more than 250,000 people – have the coronavirus, the mayor of the Russian capital said, citing test results.

Sergei Sobyanin wrote on his blog that Moscow has significantly ramped up testing capacity over the past few weeks, adding the city has managed to “contain the spread of the infection” due to the enforcement of stay-at-home rules and other measures.

But he reiterated that the city was not yet past the peak of the outbreak, saying “the threat is apparently on the rise”.

Hello, this is Tamila Varshalomidze in Doha, taking over the live updates from my colleague Ted Regencia in Kuala Lumpur.

A small cluster has emerged at a meat factory in the Australian state of Victoria, health officials said on Saturday, as parts of the country started easing physical distancing restrictions after suppressing the infection rate to below 1 percent.

Three of the cases in Victoria were related to a meat-processing facility, said its health minister. A total of eight employees have tested positive.

In Australia’s most populous state of New South Wales (NSW) two out of five new cases were recorded at the Newmarch aged care facility in Sydney, where about 60 people have been infected, and 13 have died.

Local clusters of COVID-19 and cruise ship infections have accounted for a large percentage of Australia’s nearly 6,800 cases and 93 deaths.

Thailand reported six new coronavirus cases and no new deaths on Saturday, bringing the total number of cases to 2,966, according to Reuters news agency.

Three of the new cases were found on the southern resort island of Phuket, said Taweesin Wisanuyothin, a spokesman of the government’s Centre for COVID-19 Situation Administration.

While more than half of Thailand’s nearly 3,000 cases were concentrated in Bangkok, Phuket has the highest rate of infection per population, Taweesin said. Since Thailand first detected the virus in January, 54 patients have died, 2,732 have recovered, and 180 are still hospitalised, according to official figures.

NASA and SpaceX have urged spectators to stay home for the first home launch of astronauts in nearly a decade because of the coronavirus pandemic.

Top officials warned the public against travelling to the US state of Florida for the May 27 launch of two NASA astronauts on board a SpaceX rocket to the International Space Station, the Associated Press news agency reported.

04:13 GMT – Singapore to ease restrictions starting on May 12

Singapore announced on Saturday that it will ease some restrictions in the country, allowing some businesses to operate starting May 12, according to Reuters news agency.

Health Minister Gan Kim Yong said that as the number of cases in the broader community drop, more restrictions will be lifted in the weeks to come.

The government also said it will allow some students to return to school beginning on May 19.

03:35 GMT – Malaysia: Raid of migrants carried out to contain coronavirus 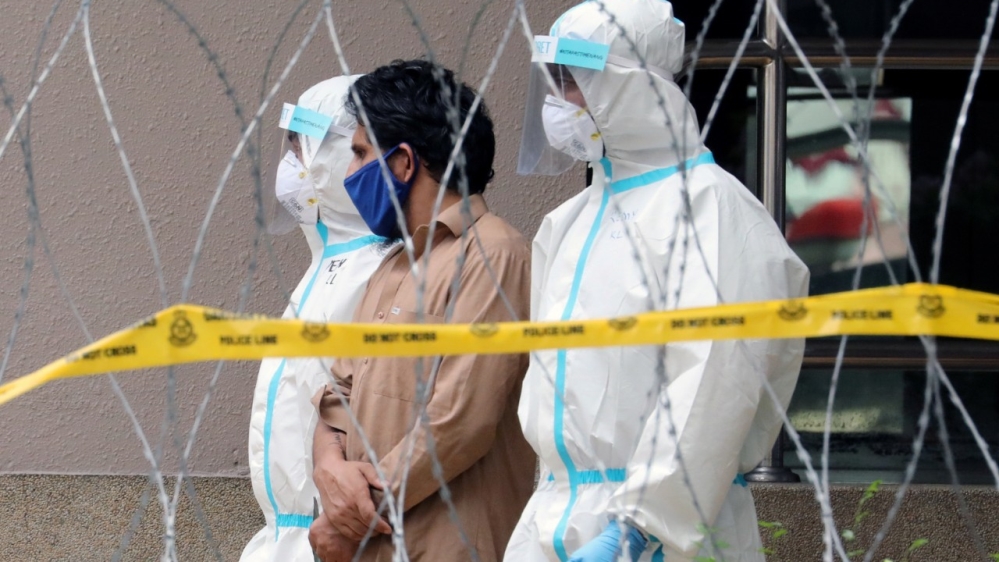 Malaysian authorities rounded up undocumented migrants as part of efforts to contain the spread of coronavirus, the country’s police chief said.

Over 700 migrants were taken into custody, including young children and Rohingya refugees from Myanmar, during Friday’s raid in a downtown area where thousands of migrants and asylum-seekers live, rights groups had said.

“We cannot allow them to move freely… as it will be difficult for us to track them down if they leave identified locations,” Inspector-General of Police Abdul Hamid Bador told state news agency Bernama.

Those detained would be placed at a single location for monitoring until the movement curbs are lifted, he said, according to state news agency Bernama.

The number of confirmed coronavirus cases in Germany rose by 945 to 161,703, data from the Robert Koch Institute for infectious diseases showed on Saturday.

The International Monetary Fund has approved a request from Ecuador for emergency financing to fight the coronavirus pandemic, granting a $643m loan, the Andean country’s economy ministry has announced.

Ecuador has been among the hardest-hit countries in Latin America, with 24,675 confirmed cases and 883 deaths, plus a further 1,357 deaths that were likely caused by the coronavirus.

“This financing will allow us to have the necessary liquidity to support the reactivation of the economy, and protect jobs,” the ministry said in a statement.

The Japan Sumo Association has announced it will reconsider its schedule for the summer grand tournament starting on May 24 if the government extends the state of emergency, Japan’s NHK news reported.

The nationwide measures are currently due to expire on Wednesday, May 6.

The opening of the event had already been postponed for two weeks to May 24.

Organisers are also considering holding the tournament without spectators, or cancelling it, the report said.

South Korea reported six more cases of the new coronavirus on Saturday, bringing the nation’s total infections to 10,780, according to Yonhap news agency.

It marked the fourth day in a row for the new daily infections to stay in the single digits. 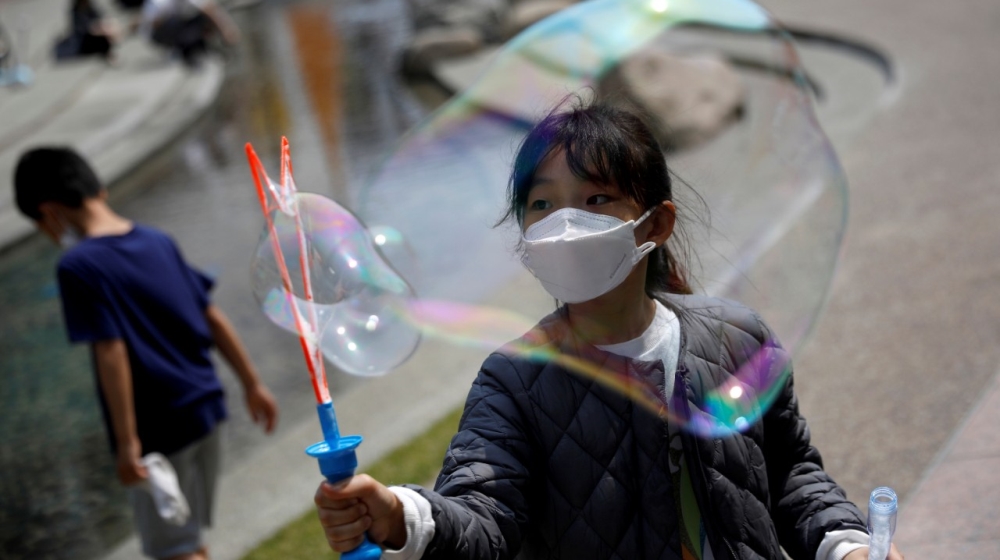 At least 9,123 of the 10,780 infected people recovered from the coronavirus in South Korea as of Saturday [Kim Hong-Ji/Reuters]

An investigation conducted by the Reuters news agency has revealed that taxpayer money has gone to some companies and people facing civil or criminal fraud investigations in the US.

The disclosures prompted outrage among some congressional Democrats, who say they highlight the problems with how stimulus funds have been distributed.

The funds came from the $2.3 trillion CARES Act passed by Congress to blunt the economic toll of the pandemic, which has killed more than 64,000 Americans and thrown at least 30 million people out of work.

00:05 GMT – US emergency approval broadens use of COVID-19 drug remdesivir

Gilead Science Inc’s antiviral drug remdesivir was granted emergency use authorisation by the US Food and Drug Administration as a treatment for COVID-19, clearing the way for broader use of the drug around the US.

During a meeting at the White House with US President Donald Trump, Gilead Chief Executive Daniel O’Day called the move an important first step and said the company was donating 1.5 million vials of the drug to help patients.

The donation is expected to be enough for at least 140,000 patients, depending on the number of days they need to be treated.

Gilead said on Wednesday that the drug, which is given intravenously, had helped improve outcomes for patients with COVID-19 and provided data suggesting it worked better when given earlier in the course of infection.

Meanwhile, the US Centers for Disease Control and Prevention has launched a national viral genomics consortium to better sequence the transmission of COVID-19.

Hello and welcome to Al Jazeera’s continuing coverage of the coronavirus pandemic. I’m Ted Regencia in Kuala Lumpur, Malaysia. You can find all the key developments from yesterday, May 1, here.

Coronavirus: BofA says US consumer spending starting to rebound — as it happened

Robinhood founders to be worth over $5...