Trending Now
হাড়ের ক্ষয়রোধ করে নাশপাতি | Bangla Health Tips | Self...
EXCLUSIVE: Experts list early signs of pregnancy and the precautions...
Men Don’t Have Routine Screenings For HPV-Related Cancers.
Zalmay Khalilzad sticks by his Taliban deal, says the U.S....
Notes on a statistical scandal
On the Primacy of the Physician-Patient Relationship, From an Unlikely...
6 reasons to book your South American dream vacation now
The 5 Best Men’s Short Back And Sides Hairstyles
HOW TO TRAVEL TULUM – 7 Days in Paradise
Saudi Arabia Pledges 2060 Target of Net-Zero Emissions
World News


In an Armenian trench in the disputed territory of Nagorno-Karabakh, strings of empty ration cans hang from a rafter jerry-rigged above canted mud walls, intended to jangle in the event of contact from an enemy stationed only a few hundred yards away. The rust on the cans suggests they are a relic of the war that killed some 30,000 people before it ended in a ceasefire in 1994. But for photographer Emanuele Satolli, who took the picture, they evoke conflicts still decades older.

“It’s a very old system, like a Second World War trench,” says Satolli, who returned from the South Caucasus enclave on Oct 17. The Armenian volunteers he met baking bread for soldiers, or sowing fatigues for their country’s war effort in the disputed territory’s main city Stepanakert, also seemed reminiscent of World War II, he says: “Everybody that’s there is trying to contribute.”

A woman speaks with a man through an open window of a shelled building in Stepanakert. 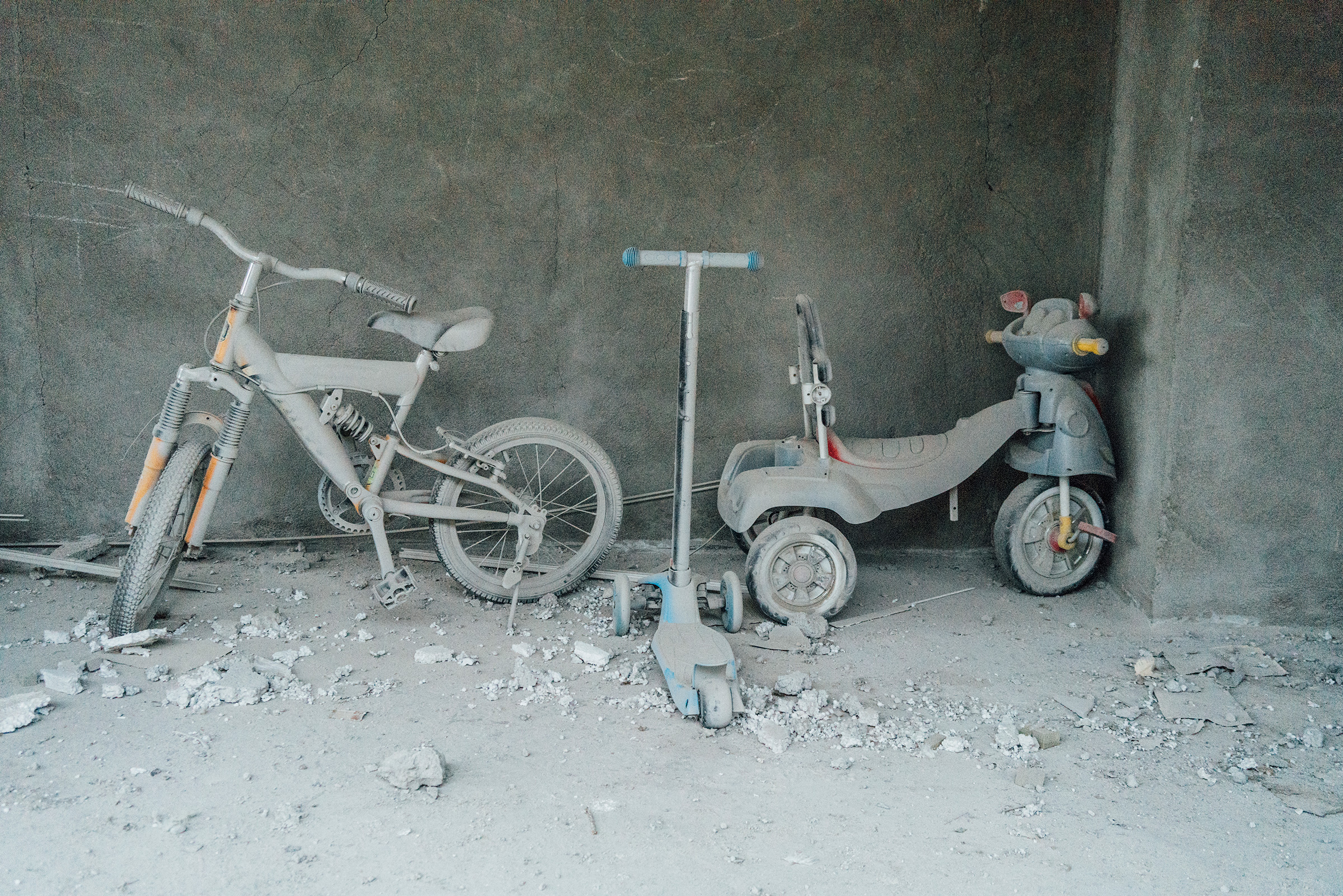 Dust blankets the yard of a house hit by shelling in Stepanakert. 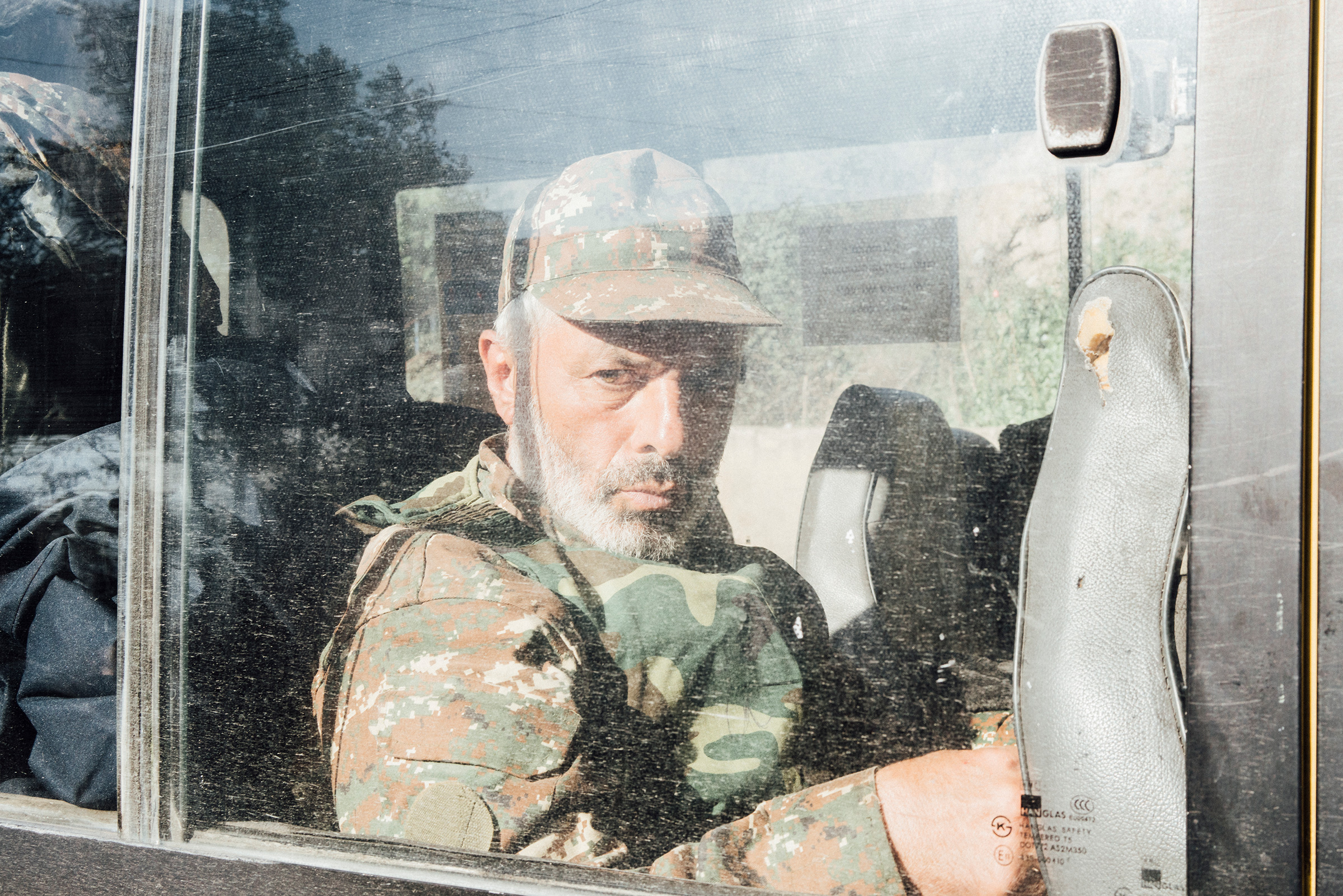 An Armenian soldier sits inside a vehicle near the town of Karmir Shuka.

It’s not surprising that fighting in what’s often known as Europe’s oldest “frozen war” is viewed as a collective effort in both Armenia and Azerbaijan. While its roots date back to the early 20th century, the land war erupted after the fall of the Soviet Union. A 1994 ceasefire left Armenia in de-facto control of the territory, which the international community regards as being within Azerbaijan. Although the conflict has been mostly dormant since 1994, the dispute at its core was never resolved. Since fighting restarted on Sept. 27, hundreds of soldiers and more than 100 civilians have been reported killed, and a wider regional conflagration remains a possibility.

Those involved see it as existential. Nagorno-Karabakh is a “civilizational frontline” Prime Minister Pashinyan told TIME in an Oct. 2 interview during which he doubled down on accusations that Turkey is intervening militarily on behalf of Azerbaijan and has sent thousands of Syrian mercenaries to the front line (Turkey has said it will back Azerbaijan “with all its means” but denies military involvement.) For Azerbaijan too, the conflict is “a patriotic war,” Azerbaijan’s Foreign Ministry Spokeswoman Leyla Abdullayeva said in an interview the following day. “We need to eliminate the fact of occupation, otherwise we will not see lasting peace and security in the region.” 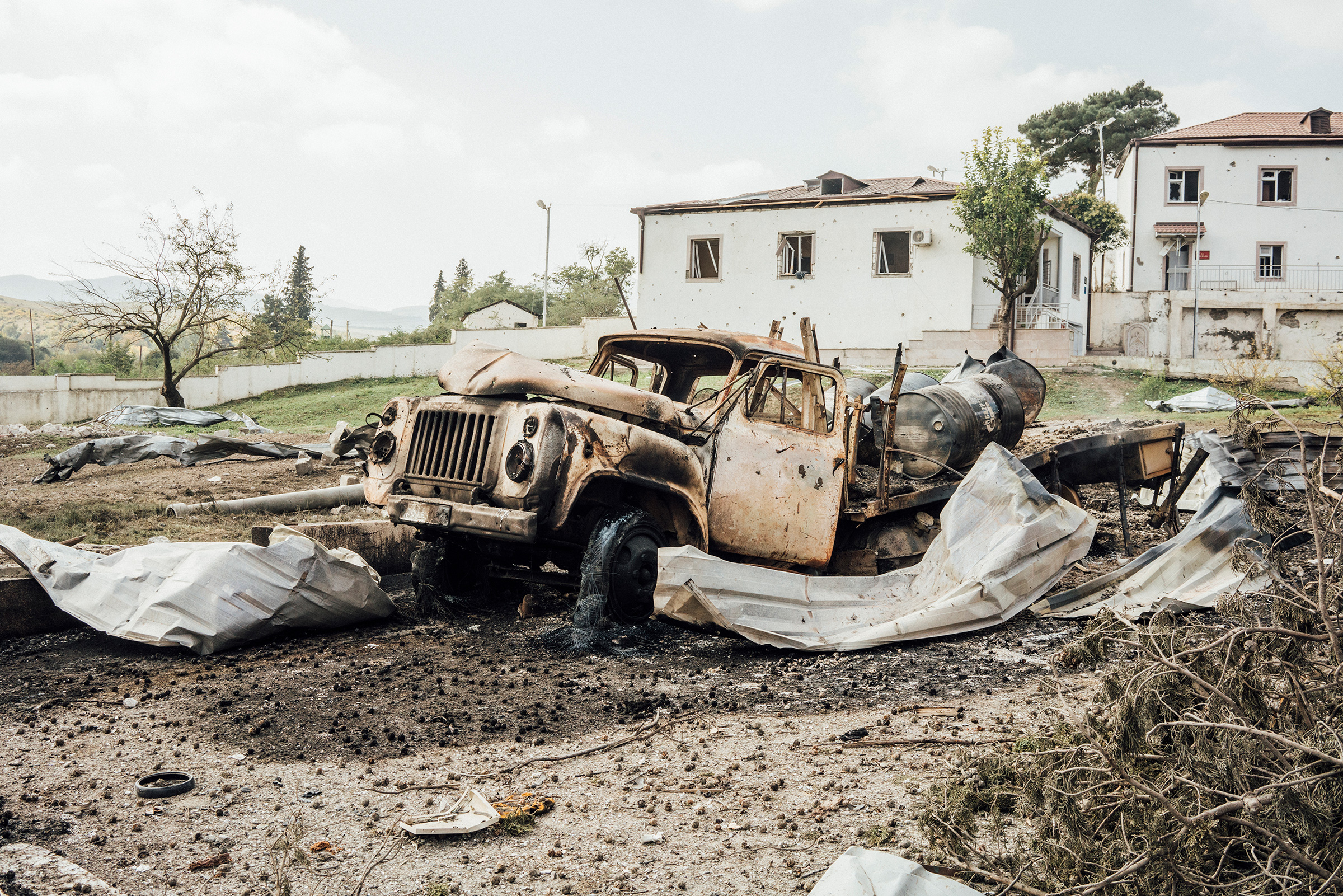 A vehicle destroyed by shelling in the town of Martakert. 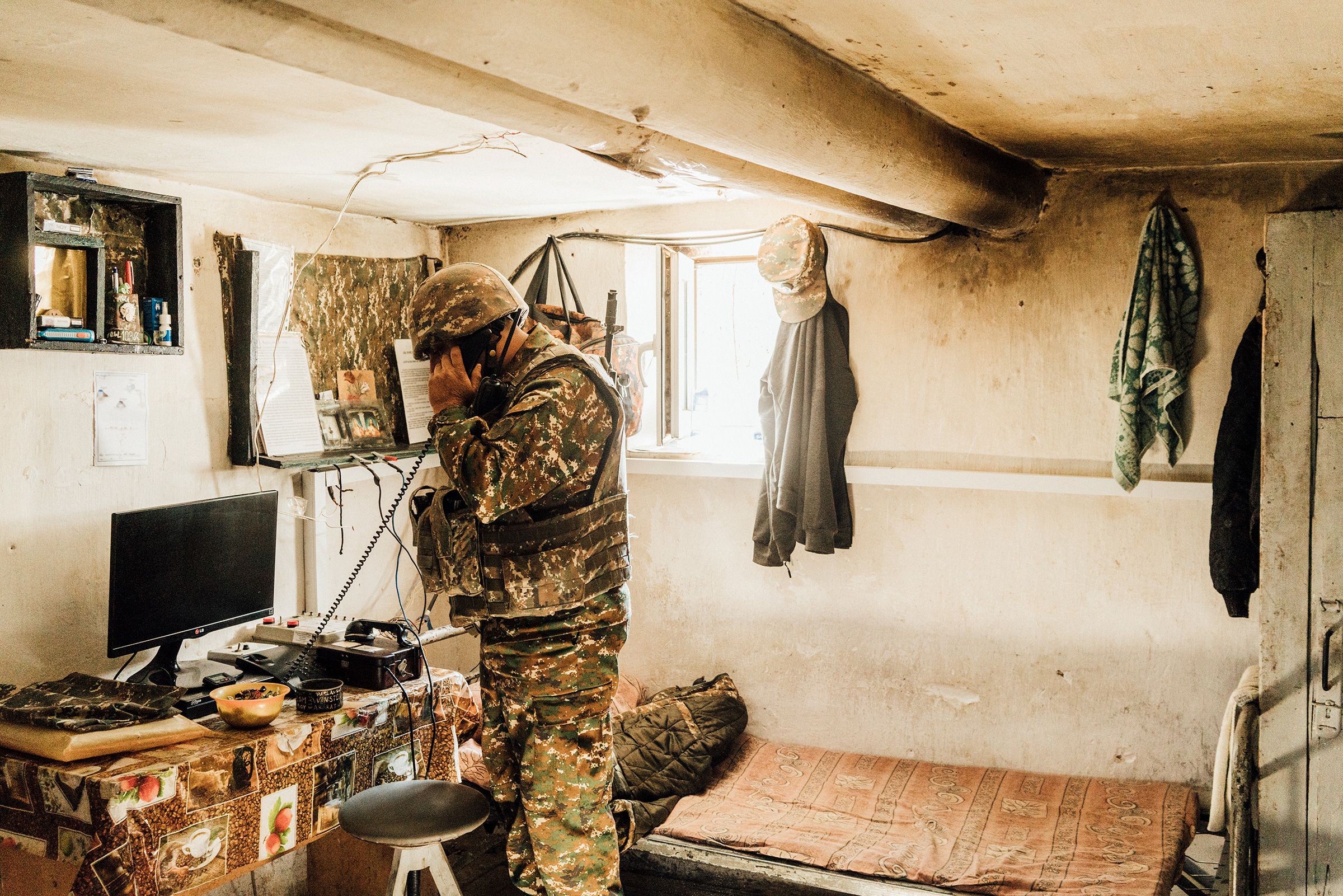 An Armenian soldier talks on a radio inside a bunker on a frontline position near Askeran. 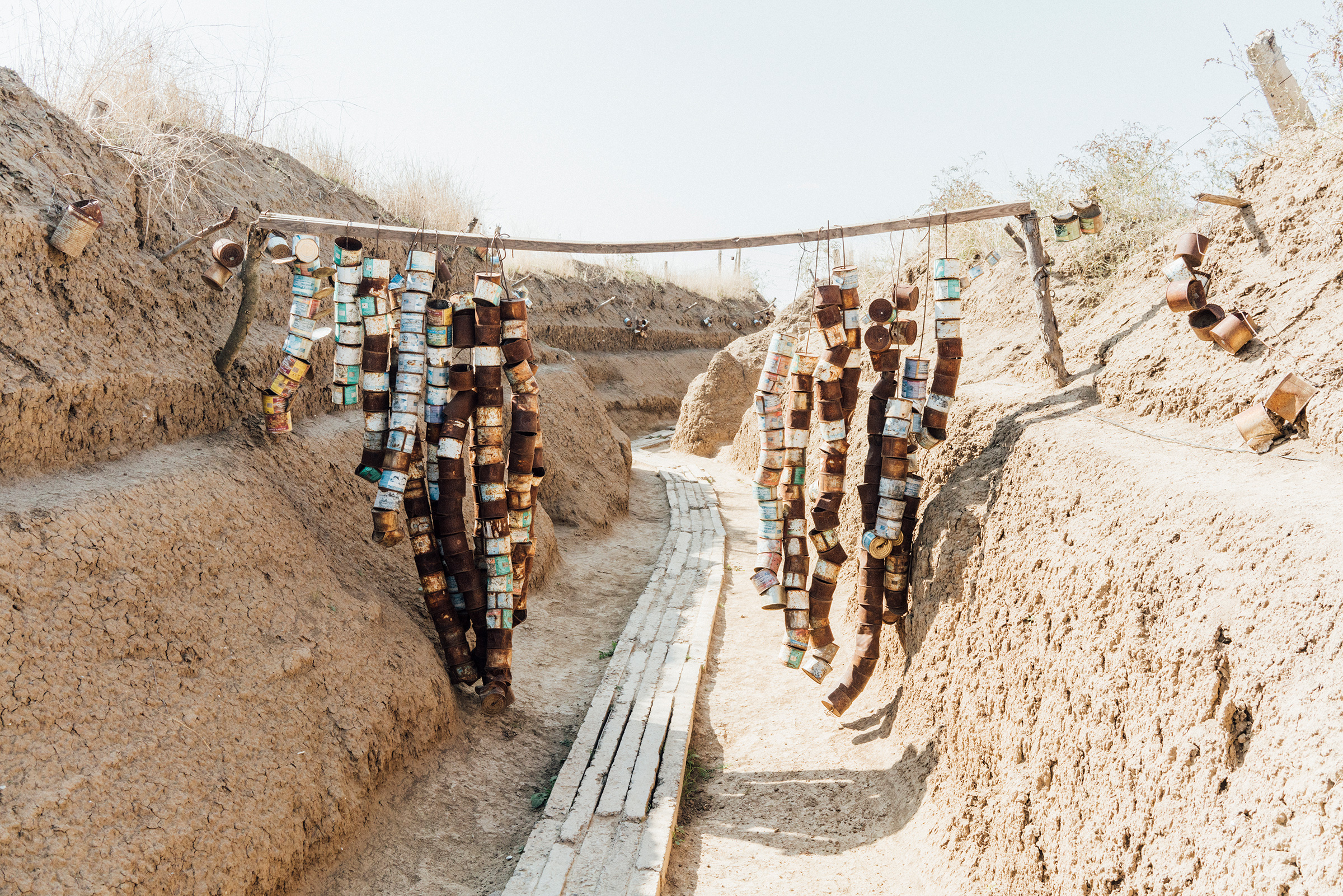 Strings of empty ration cans hang in a frontline trench near the town of Askeran.

Two ceasefires have failed to end the violence. The latest, on Oct. 17, collapsed after hours as each side accused the other of breaching it. While hostilities no doubt continued, misinformation swirls. That day, the Press Secretary for Armenia’s Ministry of Defense shared a tweet showing civilian housing, which she wrote had been struck overnight in violation of the latest humanitarian truce. But Satolli says the building was already damaged when he visited a week earlier. Azerbaijan, meanwhile, does not disclose military casualties and strictly controls press access.

Death tolls are hard to confirm independently. But in an Oct. 21 call to reporters, Azerbaijan’s Ambassador to the U.S. Elin Suleymanov said 69 Azerbaijani civilians, including a 10-month-old baby, had been killed in cities outside of Nagorno-Karabakh. (Armenia has in the past disputed Azerbaijani accounts of civilian casualties). Suleymanov also said that Armenian rockets that struck Azerbaijani cities were “all aimed to provoke the response of Azerbaijan against Armenian territory,” and thereby draw third parties into the conflict.

At least 36 ethnic-Armenian civilians have died, according to a local human rights ombudsman. On Oct. 21, two days before foreign minister from both countries were scheduled to meet U.S. Secretary of State Mike Pompeo in Washington D.C., Pashinyan said in a live video address that the conflict has no diplomatic solution “at this stage and for a long time ahead”, citing Azerbaijani Interscience on Nagorno-Karabakh. He also urged Armenian citizens to sign up as military volunteers and “take up arms today.” 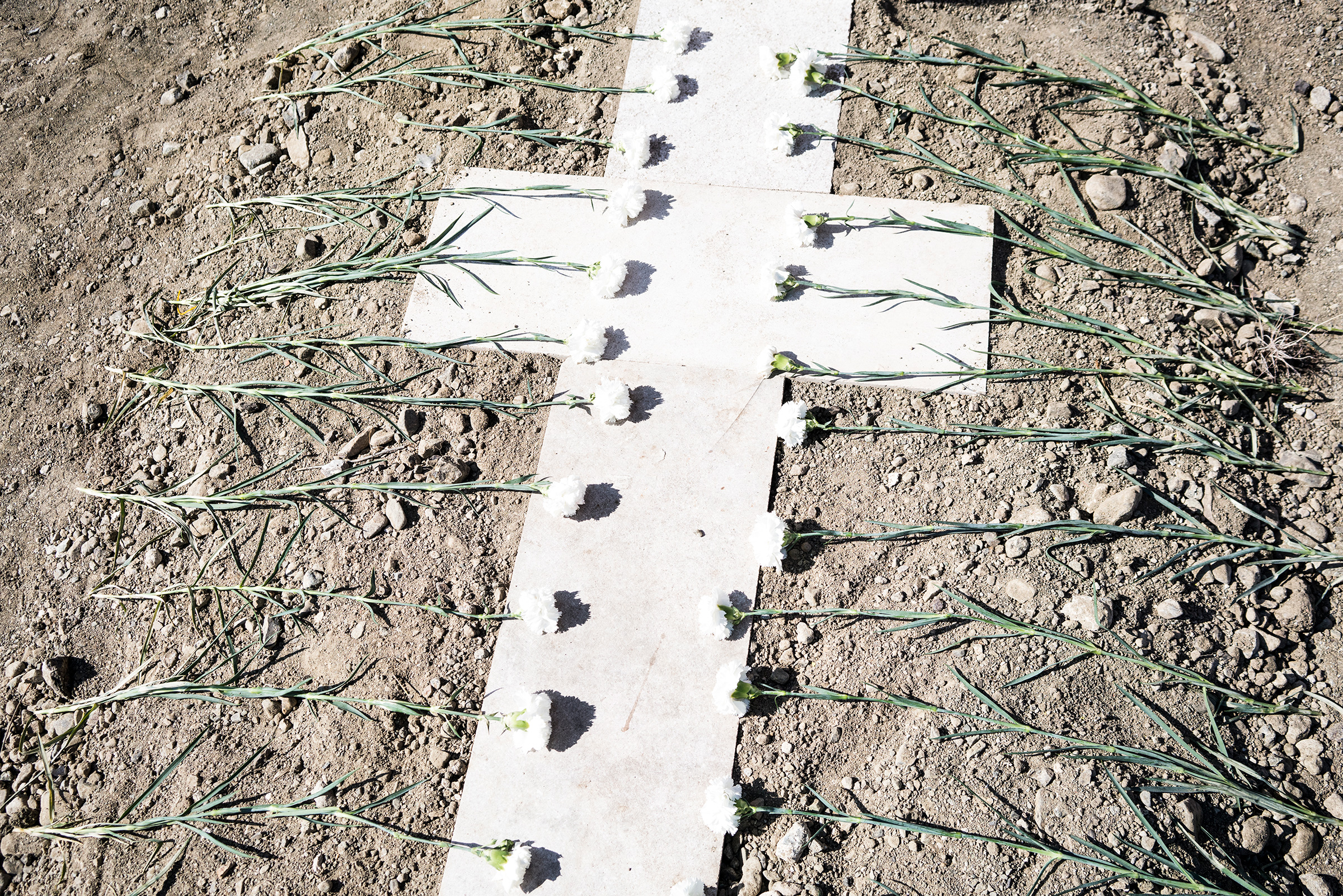 Flowers rest on the fresh grave of an Armenian soldier who was buried in Stepanakert.

Rather than battle scenes, Satolli’s images capture the eerie quiet of a near-deserted Stepanakert. With children and most women evacuated — and young male conscripts and middle-aged volunteers on the front lines—the few elderly residents who remain use their basements as bomb shelters.

In one photograph, dust blankets children’s bicycles in the yard of a shelled house in Stepanakert. Another shows a shattered auditorium roof in the hilltop town of Shusha. A third, flowers resting on the grave of an Armenian soldier. 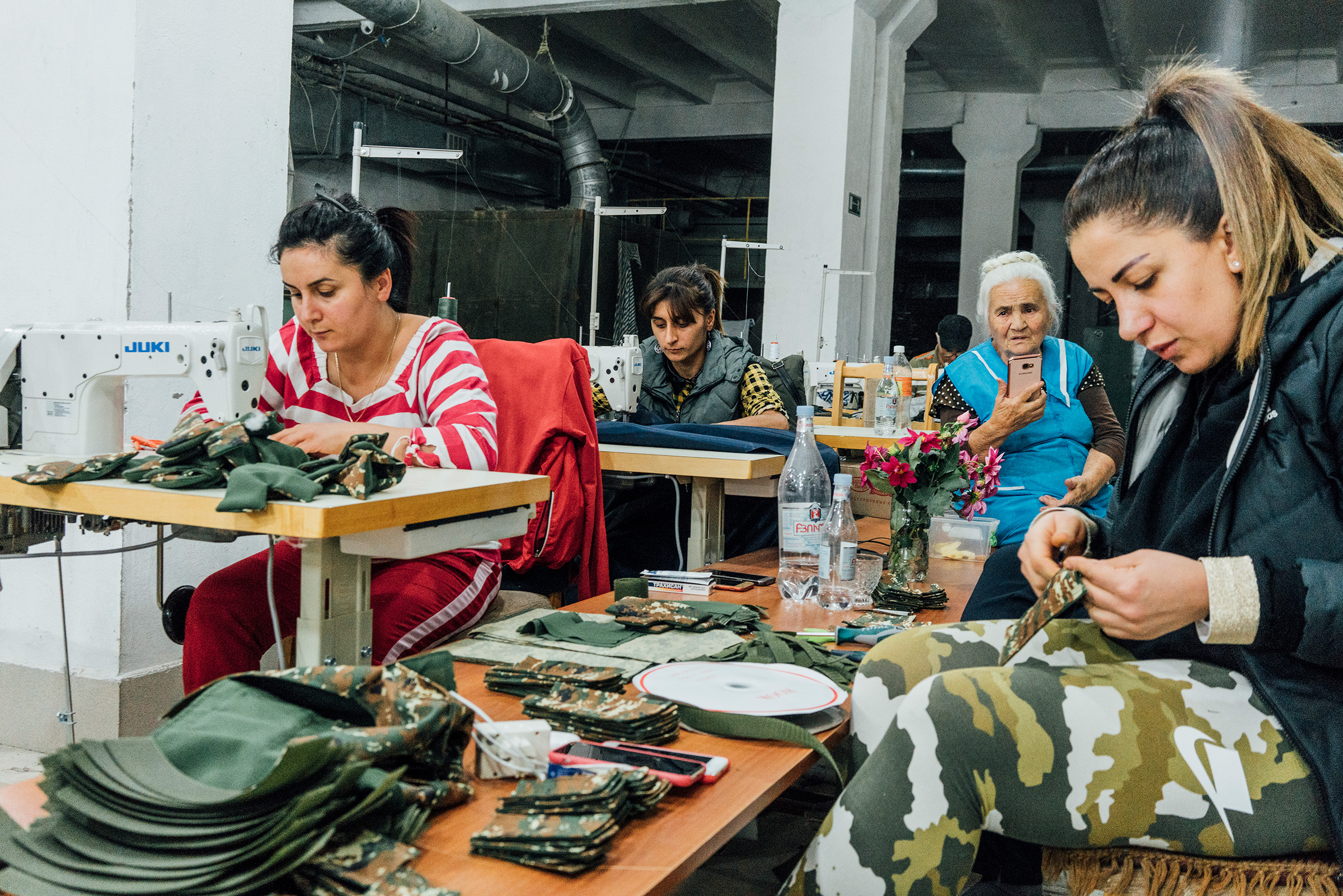 Armenian volunteers in Stepanakert sew uniforms and sleeping bags for soldiers on the frontline. 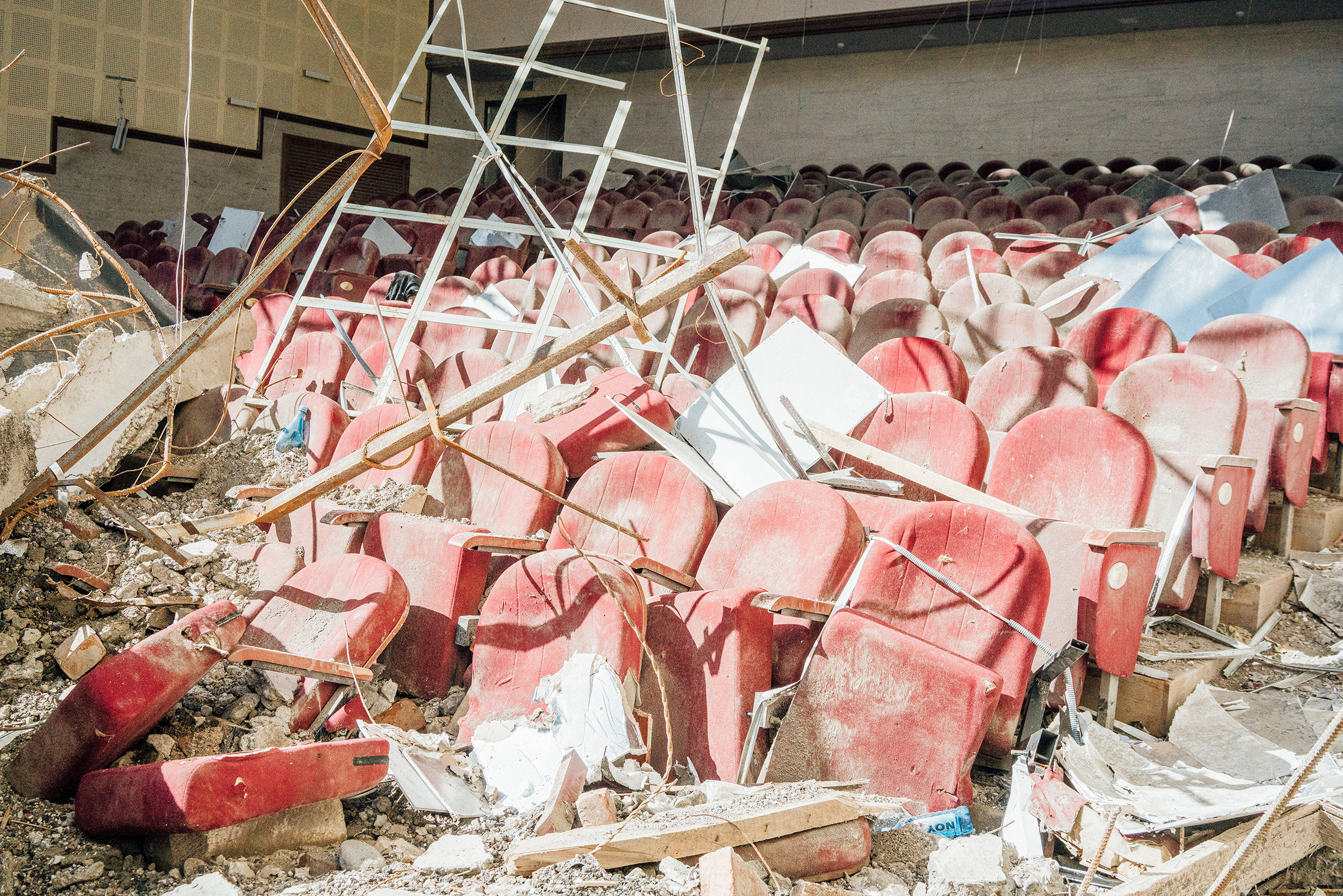 Rows of seating were destroyed in a theater in Shusha. 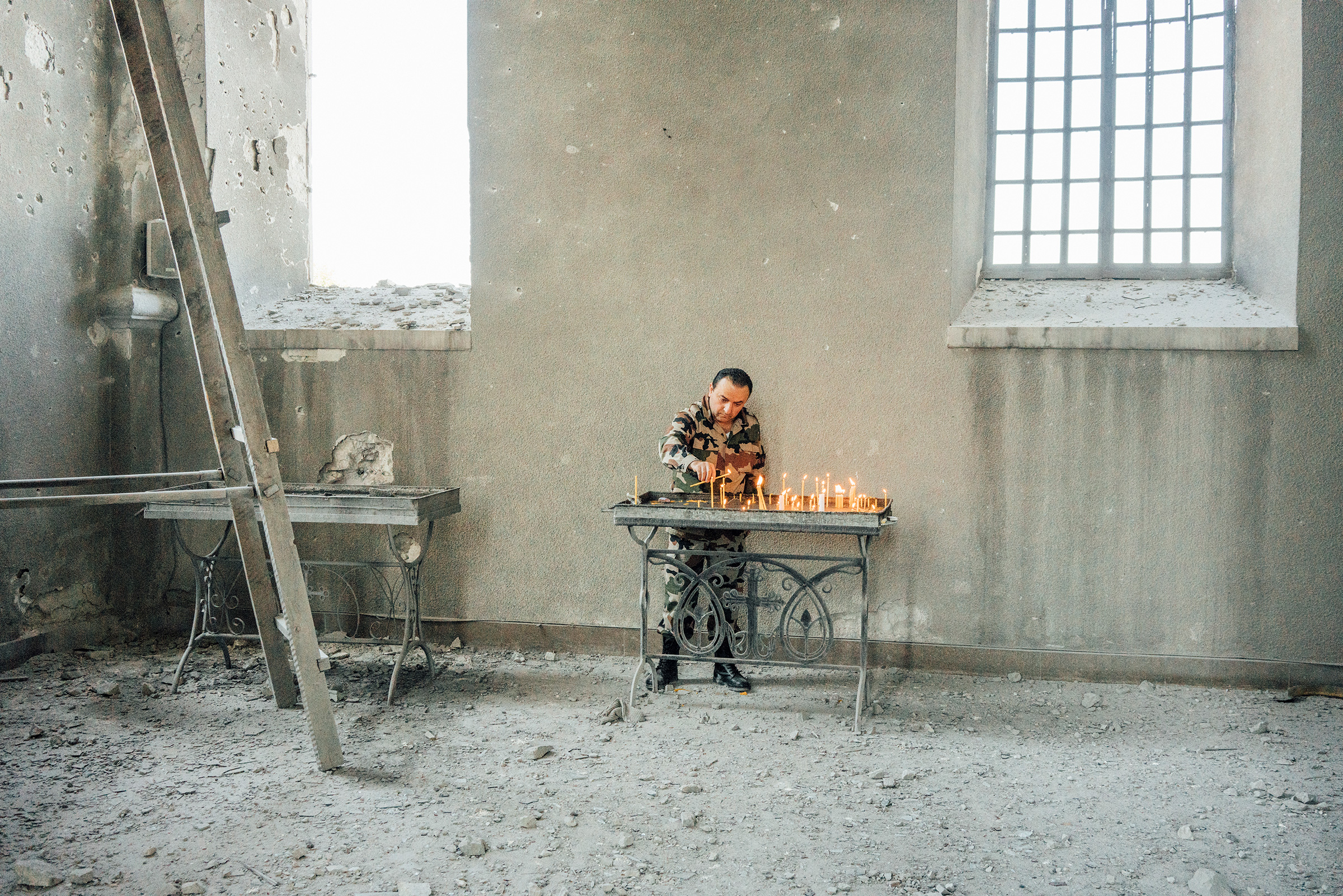 An Armenian soldier lights candles inside the Holy Savior Cathedral, which was damaged by shelling, in the town of Shusha outside Stepanakert.

The quiet that now hangs over Stepanakert is an anxious one, Satolli says. When it’s interrupted, it’s by a phenomenon at odds with the archaic impression created by trenches and volunteers sowing fatigues. The profligacy and diversity of Unmanned Ariel Vehicles—including those colloquially known as kamikaze drones—has led to suggestions the Nagorno-Karabakh battlefield offers a glimpse of how future wars will be fought.

When Satolli heard the whine of a drone overhead in the town of Karmir Shuka, he ducked into a basement where elderly residents were taking shelter, poking their heads out to scan the sky. 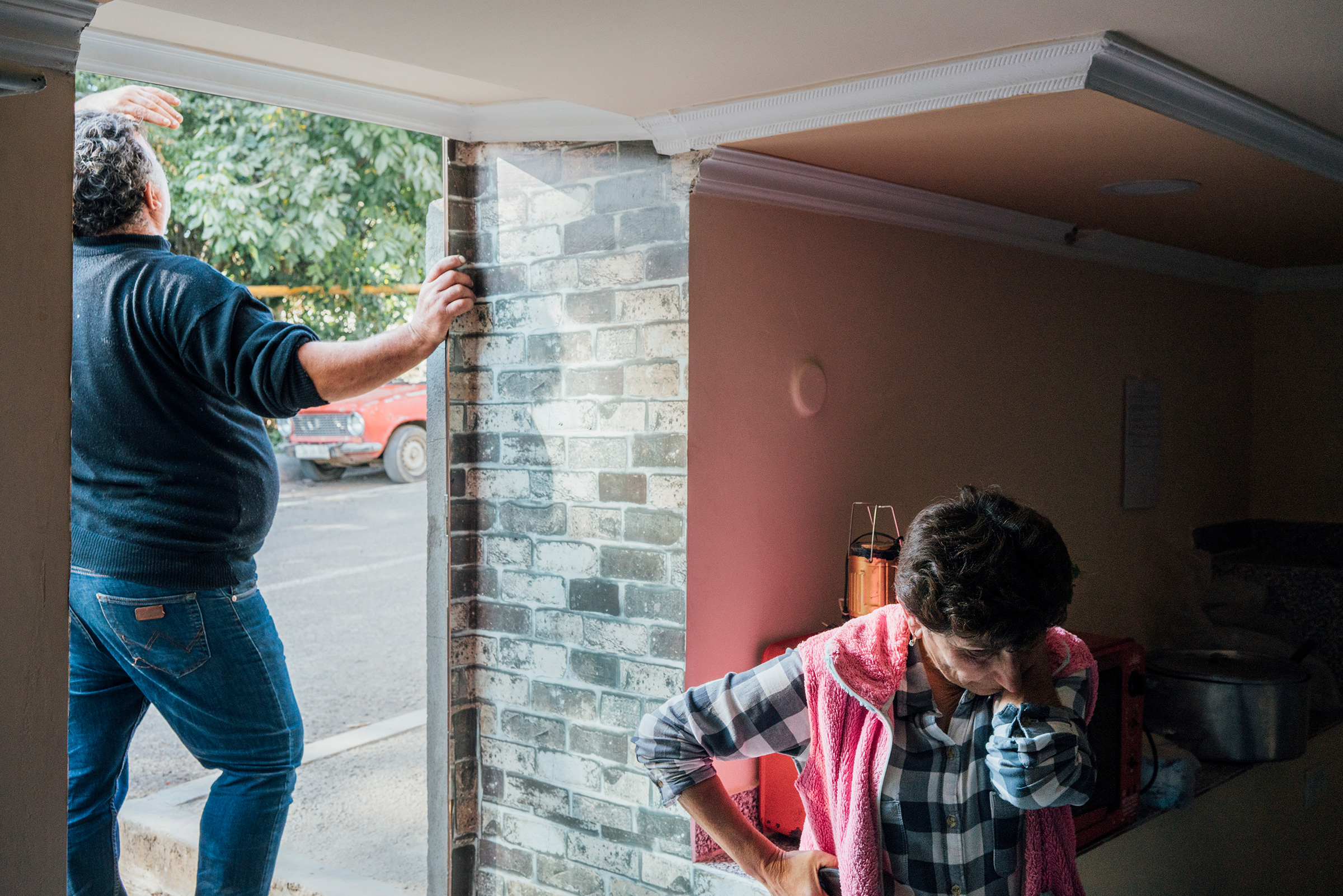 A man scans the sky after the sound of a drone is heard in Karmir Shuka. 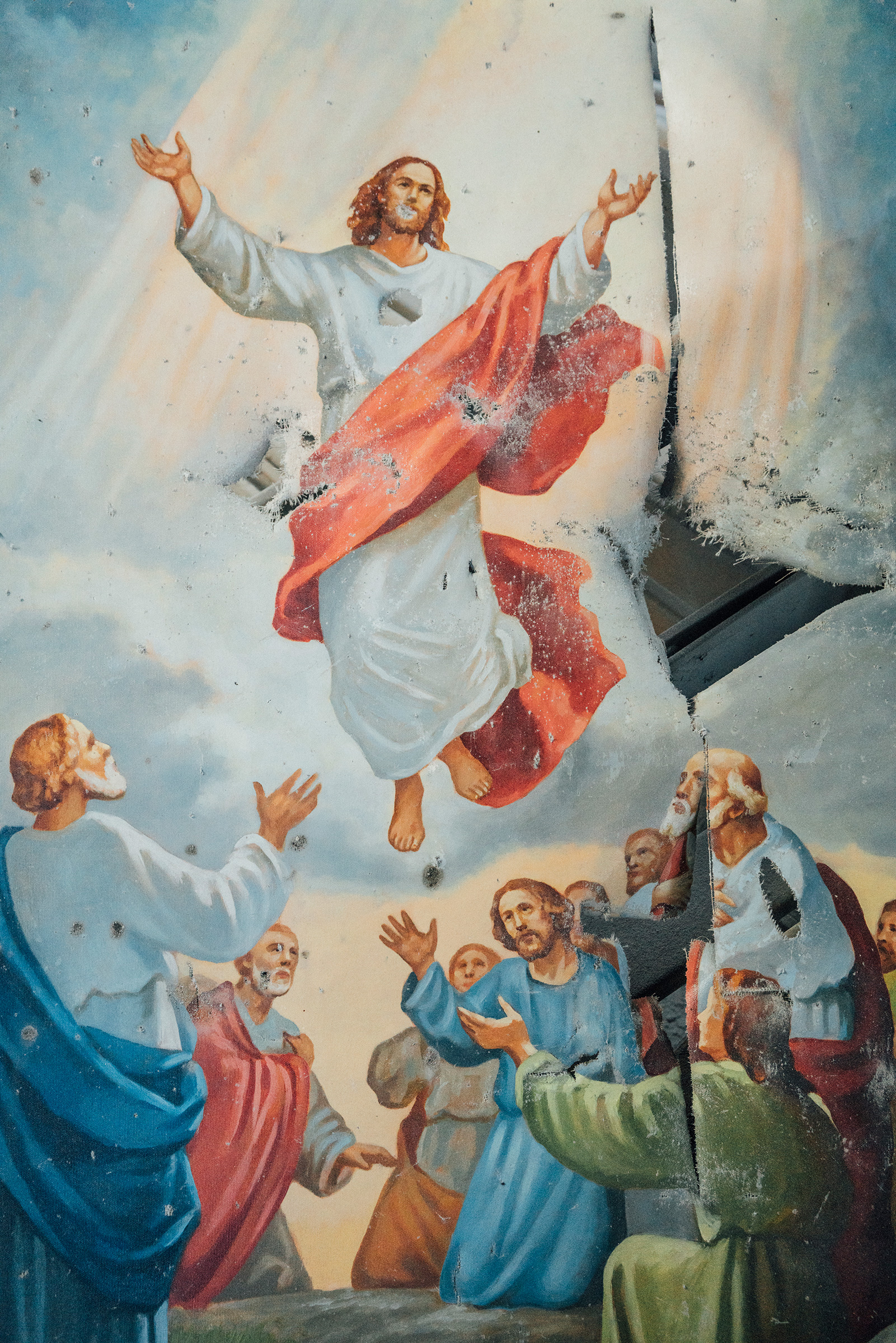 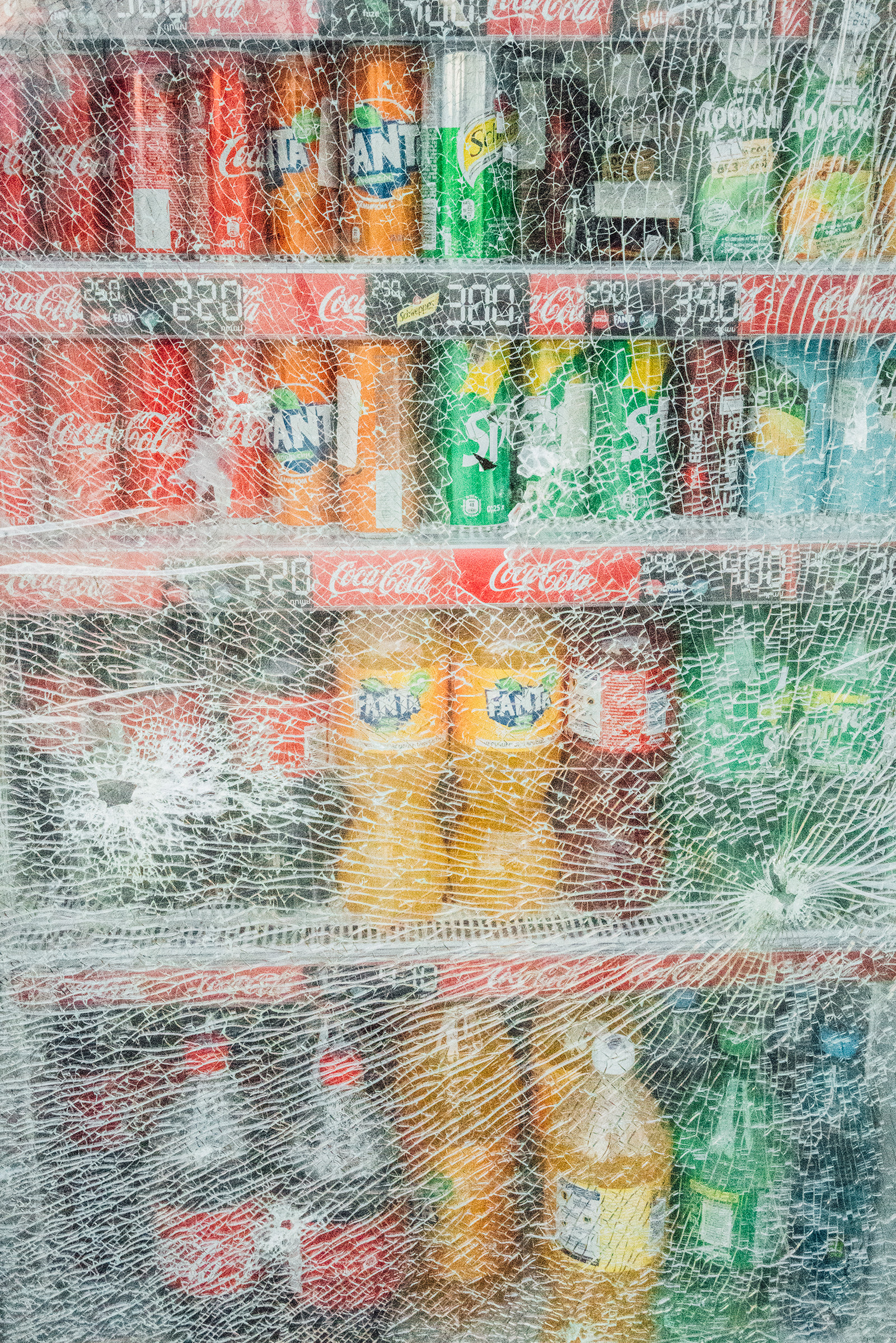 The broken glass of a refrigerator in Stepanakert. 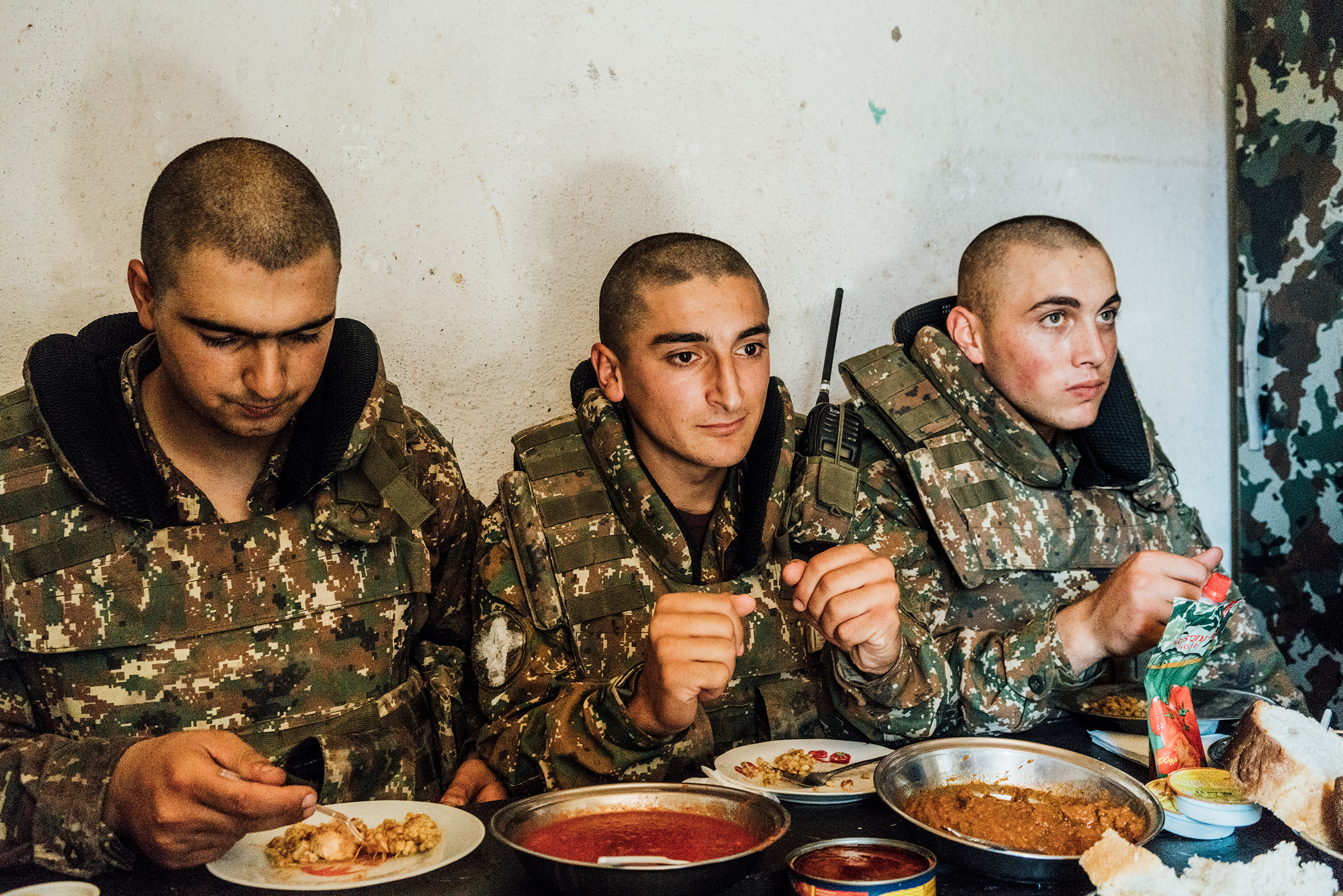 Armenian soldiers eat their rations inside a bunker on a frontline position near the town of Askeran.

In another city, Askeran, a 51-year-old Armenian artillery operator with two sons also fighting on the front line told Satolli that when drones flew overhead Armenian troops either attempted to shoot them down or simply hid.

Since fighting began, Armenia claims to have downed both Israeli and Turkish-made drones—which Turkey used to devastating effect in Syria and Libya. Azerbaijan’s defense ministry has also claimed to have shot down seven drones in the past few days. 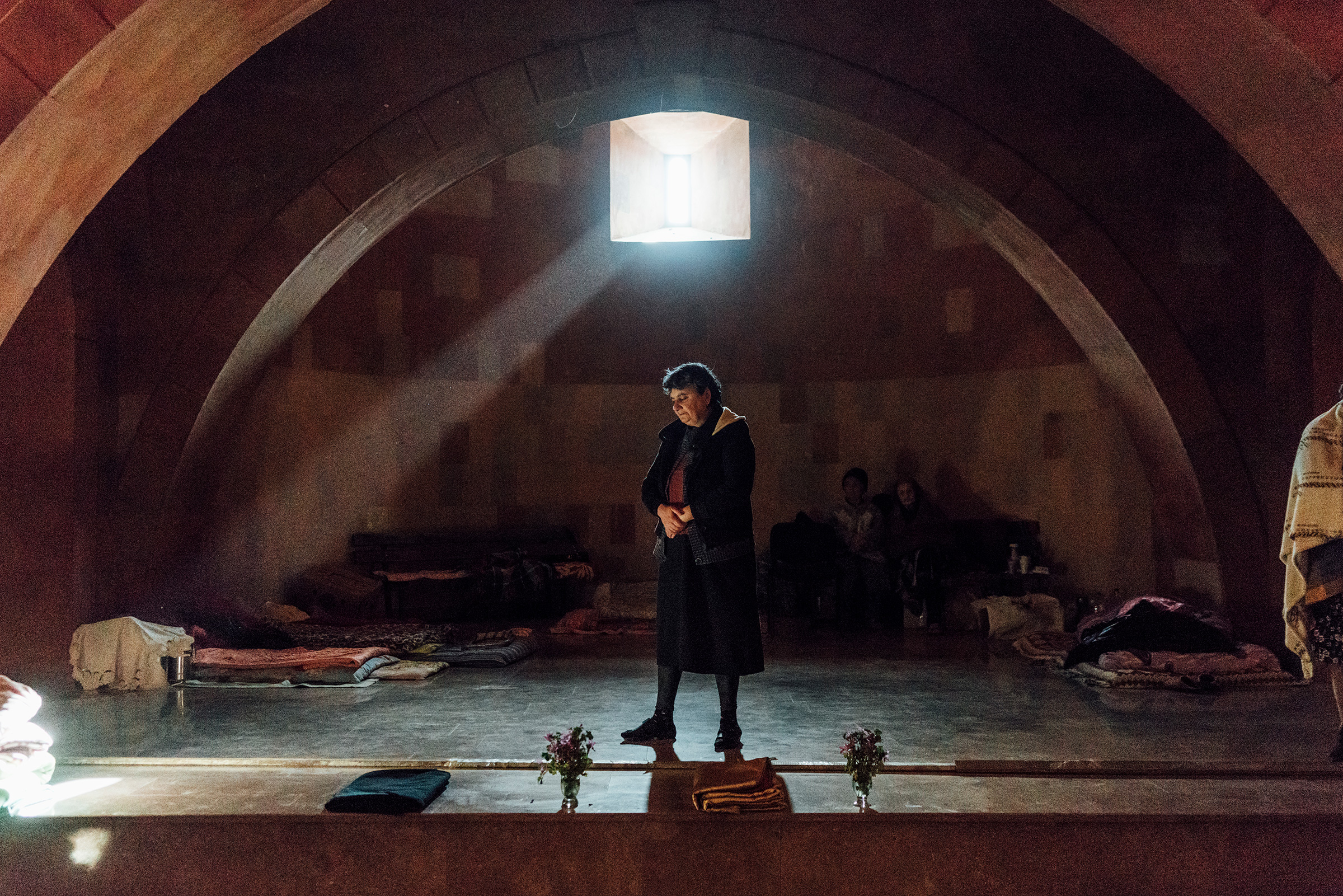 Civilians gather in the basement of a building used as a bomb shelter in Stepanakert.

Monitors have collected evidence of increasingly sophisticated weapons being used on both sides, including cluster bombs. But more quotidian objects interest Satolli. One photograph in his series depicts Coke and Fanta cans arranged in rows behind the shattered glass of a refrigerator outside a convenience store.

“Normality is violated by the war. It can happen immediately,” he says. “Today the fridge is okay: you take your can. Tomorrow, these things are part of the war.”

What Is the Milk Tea Alliance? Behind...