When Syrian painter Aziz Asmar saw the video showing the dying moments of George Floyd in Minneapolis, the violence felt close to home even if it happened 6,000 miles away. To Asmar, the handcuffed, unarmed black man pleading that he couldn’t breathe as a white police officer knelt on his neck, resurfaced painful memories of what he and other Syrians witnessed three years ago after dictator Bashar al Assad attacked civilians with sarin gas in the suburb of Eastern Ghouta.

“In those hospitals, the victims were crying and they were asking to breathe,” Asmar tells TIME via an interpreter, from the town of Binnish in northwest Syria. “I saw George Floyd pleading with the officer to let him breathe and it reminded me of the way they were killed.”

Asmar, who runs art workshops for children in Idlib, Syria’s last rebel-held enclave, expressed his pain the best way he knew. On the remnants of what he says was a family’s kitchen before regime airstrikes ripped through the building, Asmar and two friends painted an eight-foot-high mural to show solidarity with those grieving in the United States. It features Floyd’s face, appended with the words: “I can’t breathe.”

Those words have become a constant refrain at protests across the U.S., where many demonstrators see the killing of Floyd as emblematic of police brutality and systematic racism. At parallel rallies in Paris, London, Berlin and elsewhere, protesters have expressed solidarity with victims of police brutality in America, while calling attention to racism in their own countries. Floyd’s last words have also inspired myriad expressions of art, from the painting by artist Titus Kapher that appears on the cover of this week’s TIME magazine, to the graffiti featuring Floyd’s face on walls as far afield as Kenya, the Occupied Palestinian Territories and Northern Ireland. In Syria, where the vivid colors of Asmar’s mural contrast the sun-bleached rubble and twisted rebar of devastated homes, the work seems especially poignant.

“Syrians, especially in Idlib, have a history of showing solidarity with injustices around the world,” says Raja Althaibani, who directs the Middle East and North Africa program at human rights organization Witness. Established after VHS footage of Los Angeles police beating Rodney King alerted many to systemic racism in the U.S., Witness trains citizen journalists in America, Syria and other countries to safely document war crimes and human rights violations. That Syrians like Asmar are raising their voices in support of injustice in the U.S., says Althaibani, “sends a powerful message to a world that has largely neglected Syria.”

A decade ago, Idlib would have seemed a strange place for the Syrian revolution’s last stand. A mainly rural province known for its olive groves and wheat fields, some of Idlib’s towns and villages were among the first to protest against the Assad regime in 2011, But uprisings across the country soon forced the dictator to divert his security forces to major urban centers, leaving Idlib a comparative bastion of freedom. 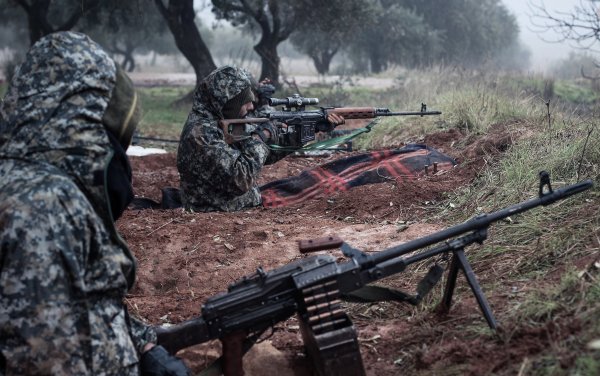 Today, it is the last major rebel-held territory in Syria. Although increasingly squeezed by jihadist groups and Assad’s Russia-backed advance, Idlib’s relative freedom has fomented a vibrant art and music culture. For Asmar, that culture has been integral to asserting the humanity of the province’s 3 million people and countering Russian and regime propaganda.

“We’re trying to show that despite being bombed and losing people, and then being called terrorists, we still feel empathy. We still feel for people like George Floyd, who are being oppressed in other parts of the world,” he says.

It’s not the first mural he’s painted. An earlier work depicts journalist Jamal Khashoggi, who was murdered in 2018 by a hit squad inside Saudi Arabia’s embassy in Istanbul. More recent work encourages people in Idlib to stay safe during the COVID-19 pandemic. “As activists, and as artists, we want to make it clear that we’re civilians, we denounce violence and we have a right to live with dignity,” he says.

Space for Syrians to live with dignity has diminished. In March, government forces retook the town of Kafranbel, an Idlib holdout especially associated with revolutionary art. Kafranbel’s protest banners—which displayed angry, witty and often heartbreaking rebukes to the regime—garnered global attention even as they mocked the international community’s silence on Syria. One of the driving forces behind the banners, prominent citizen journalist Raed Fares, was shot dead outside his home in 2018. Kafranbel’s fall to the regime came months after Assad launched an offensive to consolidate control of Syria. It forced up to a million Syrians into makeshift camps near Turkey’s southwestern border and decimated the already threadbare healthcare system in a region human rights groups warn could be devastated by COVID-19.

Not all of the artwork referencing Black Lives Matter has garnered an unequivocally positive response from activists. When Washington D.C. Mayor Muriel Bowser, had city workers paint “Black Lives Matter” in giant yellow letters on one of the main thoroughfares in the nation’s capital, some regarded it as a powerful message of support blocks away from a White House critics say has stoked division in America. But Black Lives Matter’s D.C. chapter, which is calling for police to be defunded, described the street painting as a “performative distraction from real policy changes” designed to “appease white liberals.”

Comparisons between oppression in the U.S. and in other countries, can also draw complex responses. After Floyd’s killing, Jordan-based Palestinian artist Lina Abojaradeh produced a work showing a police officer’s leg inscribed with the words “white supremacy” kneeling on the necks of a black man, an indigenous American woman and a Palestinian. Two days after she shared the drawing on social media, Israeli police shot dead an unarmed Palestinian named Iyad Halak. Halak, who was autistic, was reportedly on his way to a Jerusalem school for students with special needs.

In an interview with UAE newspaper The National, Abojaradeh said that although her work had generally been well-received, some had criticized it for drawing parallels they claimed belittle the suffering of Palestinians living under occupation. But in both cases, the oppression is rooted in white supremacy and colonialism, Abojaradeh told The National, and “standing up for one type of injustice is also standing up for every type of injustice.”

Asmar too, says there are important differences between the experience of black people in America and the experience of Syrians in Idlib, but he wants to oppose oppression and show solidarity with the oppressed.

It’s a solidarity that isn’t always reciprocated. Although Russia and Turkey, which backs some of Idlib’s rebel groups, agreed to a fragile ceasefire in March, Asmar says that from his home in Binnish he can see fields on fire after being hit by airstrikes. When those airstrikes target crowded markets or hospitals, “the world is silent and we don’t understand why,” he tells TIME. “What about the futures of our children? Don’t you think they also have rights?”

Capitol riots: Who has the FBI arrested...

Will Biden tap a U.N. ambassador to...