A resurgence in COVID-19 cases has gripped countries across Europe, leaving politicians grappling with how to curb the spread of the virus. Governments are now strengthening regulations around mask-wearing, limiting the number of people that can gather in public spaces, and honing in on areas with particularly high numbers of cases.

This week, Europe experienced a record high number of new coronavirus cases reaching 71,365 on Sept. 21, according to the European Centre for Disease Prevention and Control. “More than half of European countries have reported a greater than 10% increase in the past two weeks,” Hans Kluge, the World Health Organization’s regional director for Europe said at a briefing.

Even countries that had largely avoided the first coronavirus wave—such as Czech Republic—are now seeing surges. Stricter regulations to try and curb the spread of the virus could remain in place for the entire winter. In the United Kingdom, for example, where case rates are doubling by the week, Prime Minister Boris Johnson announced new restrictions yesterday that could last six months, warning that the country is at “a perilous turning point.”

Many of the new restrictions, however, look different to those imposed at the beginning of the pandemic. Rather than implementing uniform, nationwide regulations, many countries are now opting for more localized approaches.

Why are governments in Europe locking down by region?

Countries are wary of nationwide lockdowns that would have crippling impacts on their economies. Local restrictions allow governments to curb the spread of the virus while keeping parts of the country—and the economy—open. But restrictions are also different this time because the nature of the pandemic itself has changed. New infection clusters appear to be linked to younger people, who are less likely to die of the virus. The result is that this latest surge of cases has so far been less deadly than the first back in March and less burdensome to healthcare services.

“Even if the number of cases are high, the impact in terms of hospitalization and deaths is very different [compared to March]”, says Dr Jacobo Mendioroz, the director and coordinator of the committee responding to coronavirus in Catalonia. Rather than calling for stay-at-home orders, many new restrictions target bars, restaurants or other public venues that young people may be more likely to frequent.

But the new restrictions could change if older people begin falling ill in greater numbers. Already, there has been a significant increase in the number of older people testing positive for the virus in France and Spain over the past two weeks, leading to upticks in hospital admissions. Rising case numbers threaten to overrun hospitals and health care services if not managed carefully. “We are not in the situation we were in March yet,” says Dominique Costalgliola, a member of the French Academy of Science and the vice-dean of research for the faculty of medicine at the Sorbonne University.

Here is how four European countries are responding to the recent surge of coronavirus cases:

Elders wearing face masks to prevent the spread of the coronavirus sit on a park in Madrid, Spain, on Sept. 23, 2020.

Spain has been facing a resurgence of COVID-19 cases since July and has the highest infection rate in Europe. Over the past two weeks, 122,000 new COVID-19 cases have been reported, with close to a third of cases occurring in Madrid, the country’s capital. The total number of confirmed cases now stands at more than 640,000 and hospitals are reaching their maximum capacity.

On Sept. 18, Isabel Díaz Ayuso, the president of the Madrid region, announced a partial lockdown of the 37 most affected parts of the region, which came into effect on Monday. The measures—which affect close to 850,000 people, many of whom live in the poorest parts of the city—require individuals to provide justification for trips out of their neighborhoods and has limited the number of people allowed in restaurants or retail establishments.

The news of the lockdown sparked protests in Madrid, where hundreds gathered on Sept. 20. The groups that organized the protests said in a statement that the government has done little to protect vulnerable people in the city and have “instead opted for stigmatisation, exclusion and territorial discrimination.”

On Sept. 19, 13,498 new cases were reported, the highest number since the pandemic began in March. Since then, daily cases have risen to more than 13,000. The cumulative number of COVID-19 cases is now at 453,763 and continues to rise. It has the second highest number of total cases in Europe, after Spain. 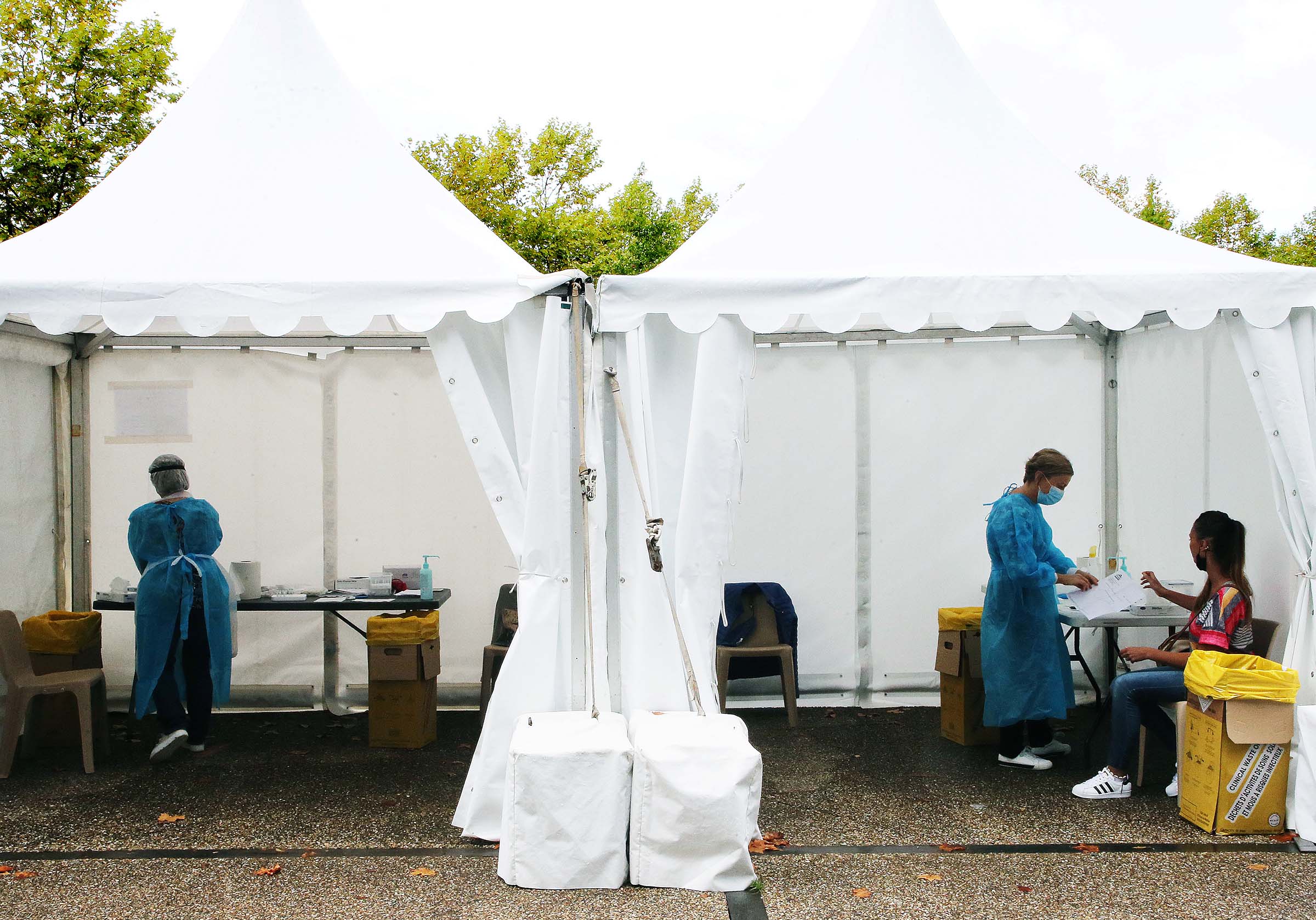 Technicians prepare to collect nasal swab samples for at a COVID-19 testing centre in Bayonne, France, on Sept. 22, 2020.

The government has delegated the task of implementing new regulations to regional authorities. Prime Minister Jean Castex said that a nationwide lockdown would have unnecessary economic repercussions.

In Paris, Marseille and Bordeaux, all major hotspots for the virus, authorities have implemented local measures to curb the spread. In Bordeaux and Marseille dancing has been banned at bars and weddings and local companies have been asked to make their employees work from home if possible. In Marseille and Paris, the sale and consumption of alcohol on the streets after 8p.m. has been banned. Wearing a face mask in public is now mandatory across Paris and many of its surrounding areas. Riot police units have been deployed to enforce these measures.

However, despite the new restrictions, the government announced on Sept. 20 that quarantine rules in elementary schools would be relaxed, amid evidence that children pose a small risk for the transmission of COVID-19. Schools will now only shut if a minimum of three students test positive for the virus.

Ireland is facing a rise in COVID-19 cases, particularly in Dublin, the country’s capital. On Sept. 22, 188 new daily cases were reported by the National Public Health Emergency Team, 76 of which are in Dublin. Ireland has logged 33,121 COVID-19 cases, in a country of 4.6 million.

The government introduced a new plan for ‘Living With Covid’ with five different levels. Dublin has been placed under level 3 restrictions, while the rest of the country is at level 2. Under level 2, schools, restaurants and pubs remain open but there are limitations on the number of people that can gather in private and public spaces. In Dublin, indoor social gatherings have been limited to visitors from only one other household and cannot exceed six people. All museums and other cultural attractions have been closed. Restaurants, cafes and pubs can only stay open for take-away services or for outdoor dining. Everyone has been asked to work from home if possible.

At a COVID-19 briefing on Sept. 21, Liz Canavan, the assistant secretary general at the Department of Taoiseach (the Irish’s Prime Minister’s office), said there was now “worrying trends in most areas,” making it possible that restrictions in Dublin could be extended to other parts of the country. 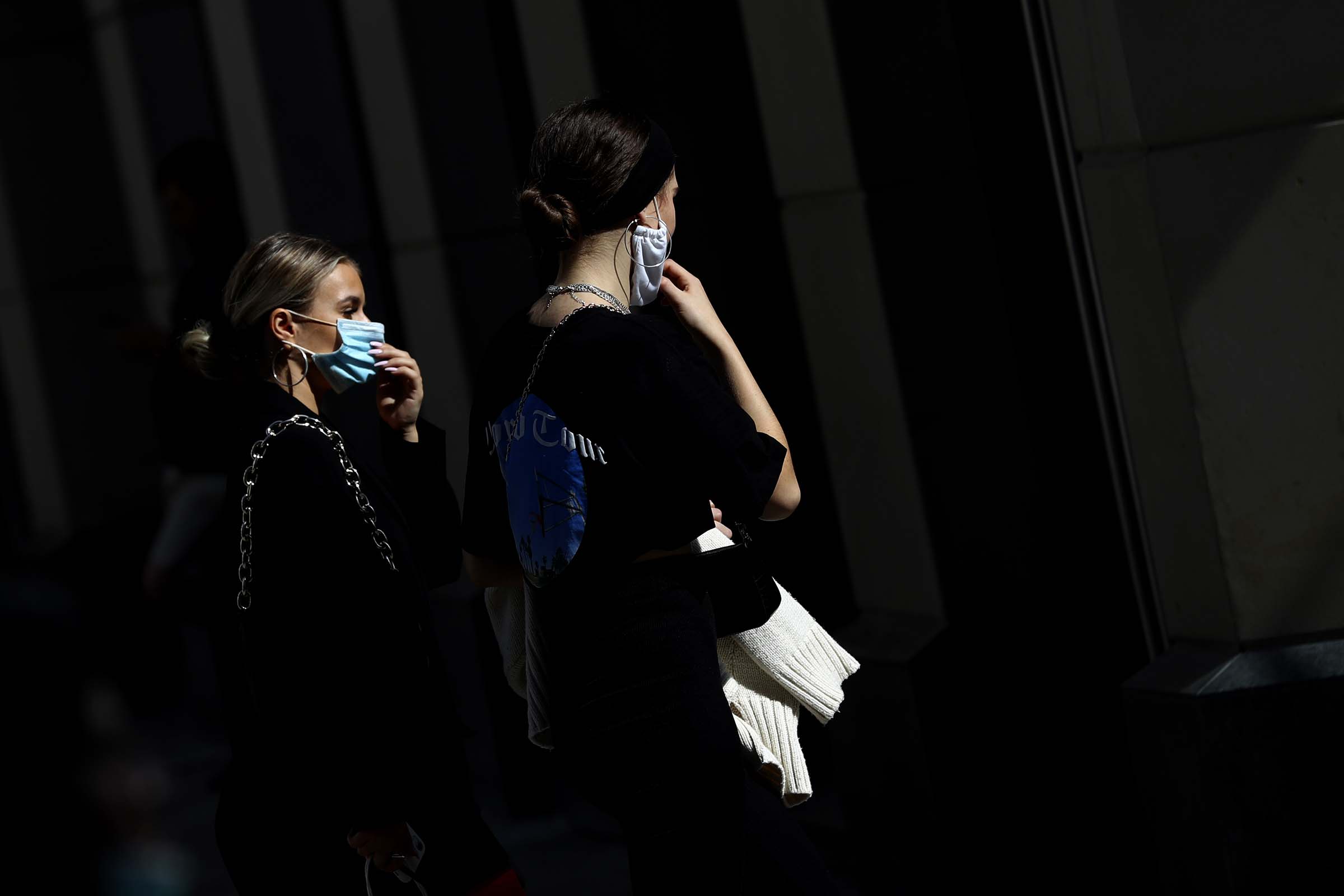 Germany has one of the most effective test, track and tracing systems in the world for COVID-19. And while the country is faring better than others in Europe, Germany is nevertheless seeing a rise in cases, with 1,345 new cases reported on September 20. German Health Minister Jens Spahn has said that surges in infection rates in neighboring countries have affected—and would inevitably continue to affect—Germany, given travel between countries in the European Union.

In the southern state of Bavaria, the most affected part of the country, the government implemented new measures on Sept. 22, including a five-person (or two-household) limit on social gatherings, a ban on alcohol consumption in public places, and a curfew on restaurants. These are the toughest restrictions Germany has seen since it began relaxing measures back in May

When Your Safety Becomes My Danger (Ep. 432)

How to Stop Stress, Cravings & Weight Gain With The Watkins Method

Where they stand on health, economy, more