Guest Contribution: “The Fiscal Effects of the Covid-19 Pandemic on Cities: An Initial Assessment”


Today we are fortunate to present a contribution written by Andrew Reschovsky, Professor Emeritus of Public Affairs and Applied Economics at the University of Wisconsin-Madison.

In a paper that will appear in the September issue of the National Tax Journal, Howard Chernick, David Copeland, and I evaluate the likely fiscal impacts of the coronavirus pandemic on a sample of 150 major U.S. central cities. Although we discuss the additional Covid-19 related costs that cities will face, our primary focus is on forecasting the fiscal year 2021 revenue shortfalls attributable to the coronavirus-induced recession.

Our analysis is based on data on fiscally standardized cities (FiSCs). The dataset, which can be accessed at https://www.lincolninst.edu/research-data/data-toolkits/fiscally-standardized-cities, combines fiscal data from a central city municipal government with a prorated share of both expenditures and revenues from all overlying school districts, counties, and special districts. FiSCs reflect the total expenditures and revenues raised on behalf of central city residents and businesses.

Based on past trends we projected FY 2021 revenues in each FiSC under the assumption that there was no pandemic (and hence no recession). For each source of revenue in each city, we then project the percentage change in revenue due to the Covid-19 pandemic under two scenarios—less severe and more severe. Figure 1 illustrates the revenue sources of the average FiSC and indicates the number of cities relying on each revenue source. The mix of revenue sources varies substantially across cities. Property taxes provide less than 35 percent of tax revenue in 8 cities, but over 90 percent of tax revenue in 20 cities. Intergovernmental revenue, from state and federal aid, make up under 20 percent of general revenue in some FiSCs, but over half of general revenue in other FiSCs.

To forecast reductions in state aid, we relied on estimates of state government revenue shortfalls generated by Moody’s Analytics and information on the size of state governments rainy day fund balances. Based on the experience with the Great Recession, we know that state revenue shortfalls translate into widespread cuts in state aid. Though they may do so later, we assume that at least in 2021, states do not address revenue shortfalls by raising tax rates. We project state aid reductions in the average FiSC of 9.6 percent in the less severe case and by 13.8 percent in the more severe case.

Our projected FY2021 revenue shortfalls for each FiSC are calculated by summing up predicted shortfalls for each source of revenue weighted by their share of total general revenues. The results are summarized in Table 1. Under our two scenarios, we predict declines in general revenue in the average FiSC of 5.5 percent and 9 percent, respectively. Under the more severe scenario, 47 FiSCs would experience revenue reductions of 10 percent or more. In dollar terms, these percentages generate revenue shortfalls of $34.2 and $55.3 billion, respectively. Expanding these estimates to all local governments in the U.S. yields aggregate revenue shortfalls of $102.9 and $165.2 billion. These are substantial cuts, which would lead to significant declines in government employment and public service provision. 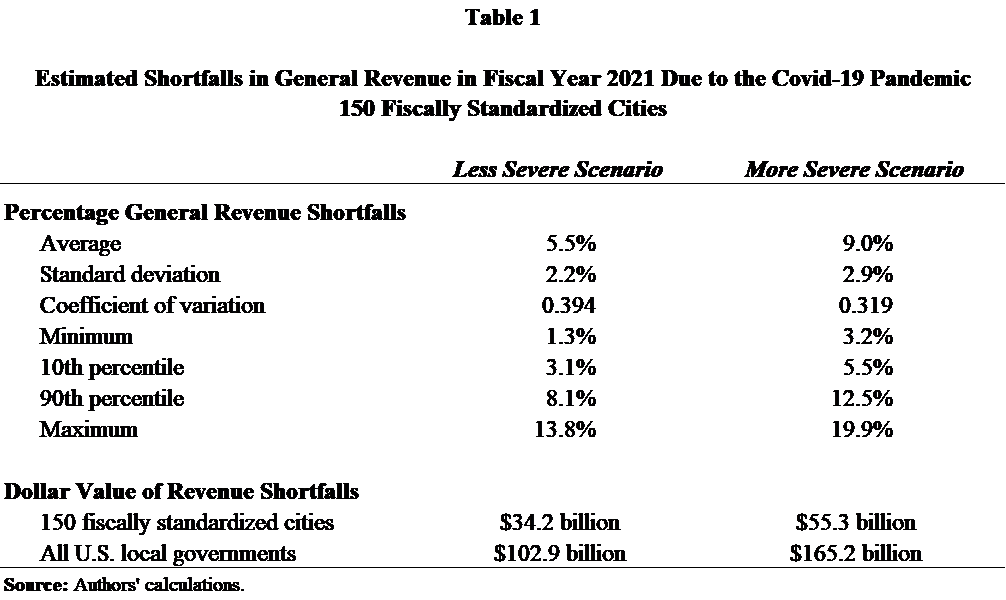 As I write this in late August, it is unclear whether the Congress and the Administration will provide additional federal aid to state and local governments. Given that state and local governments are required to balance their budgets, there is little question that unless the federal government replaces a substantial proportion of the current and forecasted drop in local government revenues, cities will be forced to implement substantial reductions in  services and capital expenditures, including large cuts in public employment, while at the same time facing additional costs associated with the pandemic. The consequences will be clearly deleterious for city residents and for the local and national economies.

The Weird and Wonderful Economy of Vatican City

Geographical Diversity in Journal Editing (and the J...

Is the Soil an “Ecosystem Service” That Can...

Good Economic Theory Is Always Grounded in the...

The effect of macroeconomic uncertainty on household spending

A (Modest?) Proposal for Earmarking

How should the Fed respond?