French Protest Police Killings In U.S. And At Home : NPR

Protesters on Tuesday in Paris take a knee, as riot officers fire tear gas and scattered protesters throw projectiles and set fires at an unauthorized demonstration against police violence and racial injustice. Several thousand people rallied peacefully for two hours around the main Paris courthouse in tribute to George Floyd and to Adama Traoré, a French black man who died in police custody. 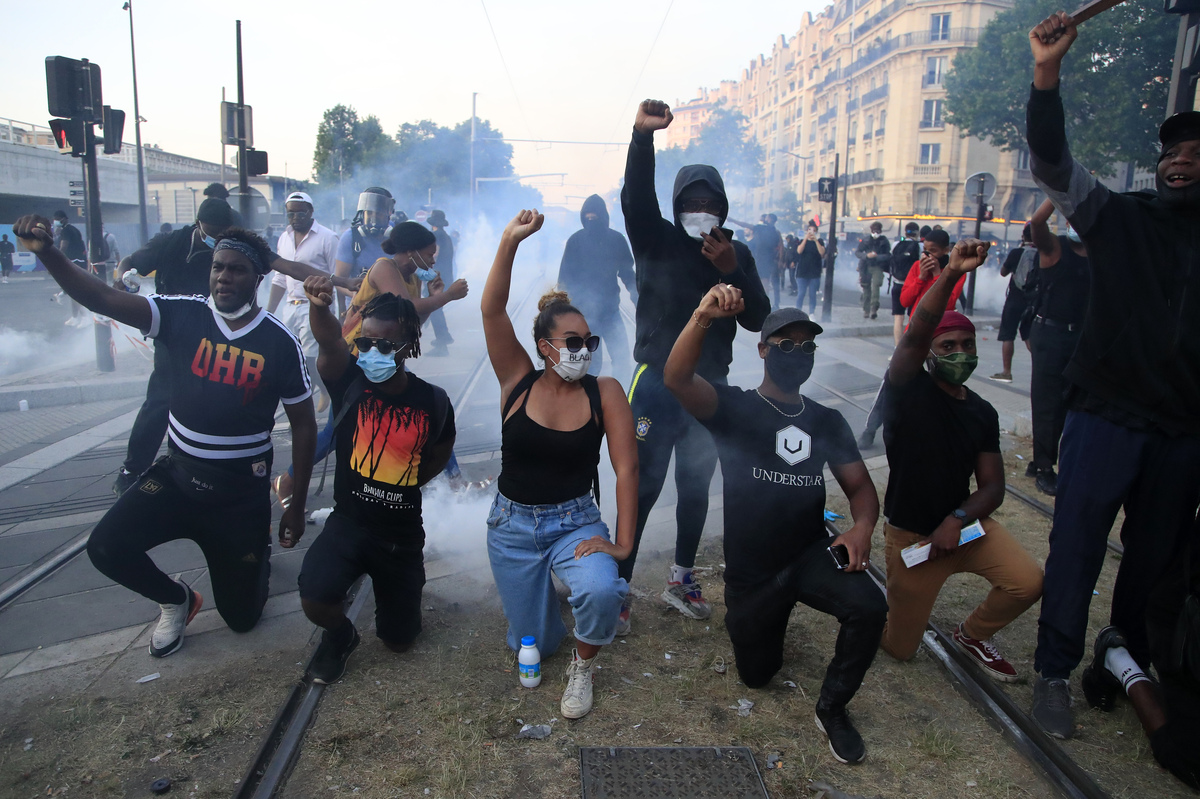 Protesters on Tuesday in Paris take a knee, as riot officers fire tear gas and scattered protesters throw projectiles and set fires at an unauthorized demonstration against police violence and racial injustice. Several thousand people rallied peacefully for two hours around the main Paris courthouse in tribute to George Floyd and to Adama Traoré, a French black man who died in police custody.

The protests in the United States against racism and police violence have inspired similar demonstrations across the Atlantic, from Amsterdam to London to Paris and Marseille.

More than 20,000 people came out in the French capital Tuesday, despite a ban on gatherings due to the coronavirus.

They shook their fists and yelled “pas de justice, pas de paix!” — “no justice, no peace!” — in front of Paris’ main courthouse. But the name the crowd chanted wasn’t George Floyd. It was Adama Traoré.

In July 2016, Traoré, a French black man, died in police custody in a suburb outside Paris. Although there is no video, many in France believe that, like Floyd, Traoré was asphyxiated by police. None of the police who interrogated Traoré have been arrested. French protesters said it is time their country wakes up to its own legacy of police brutality and impunity.

“Tonight this fight is no longer just the fight of the Traoré family, its everyone’s struggle,” yelled Assa Traoré, Adama’s older sister. “We are fighting for our brother, in the U.S. George Floyd, and for Adama.”

Assa Traoré founded the organization “Justice and Truth for Adama,” which is trying to prove that Traoré died of asphyxiation after undue police force. The circumstances of the death of the 24-year-old Frenchman of Malian origin are still under investigation after four years of conflicting medical reports about what happened. 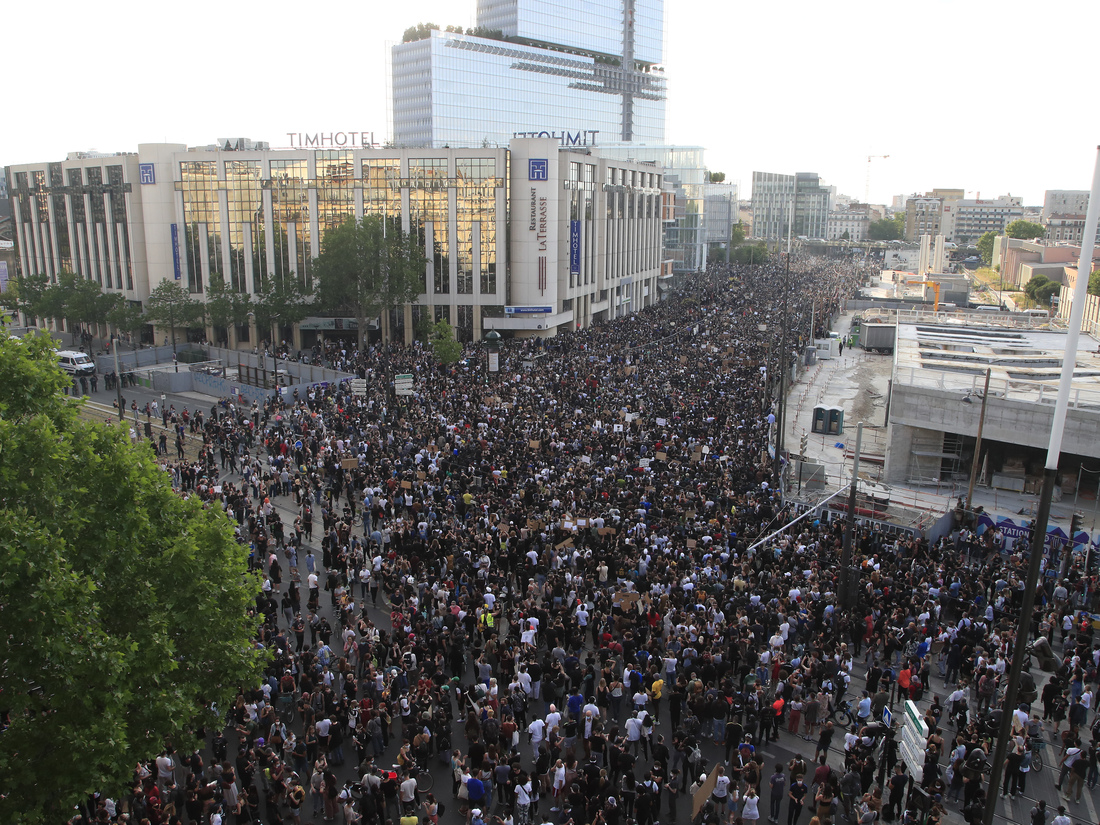 Protesters gather Tuesday in Paris. Thousands of people defied a police ban and converged on the main Paris courthouse for a demonstration to show solidarity with U.S. protesters and to denounce the death of a black man in French police custody. 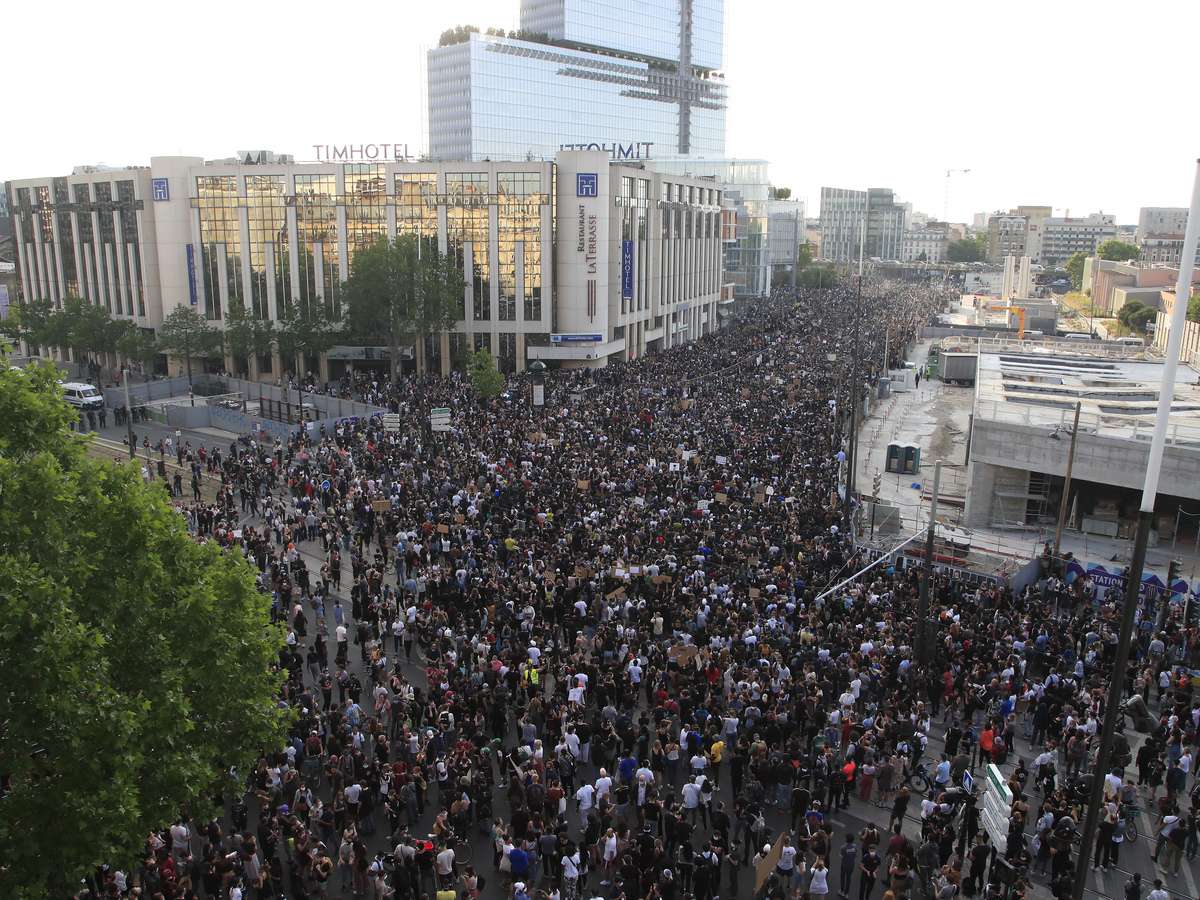 Protesters gather Tuesday in Paris. Thousands of people defied a police ban and converged on the main Paris courthouse for a demonstration to show solidarity with U.S. protesters and to denounce the death of a black man in French police custody.

She said it is time “to lift the curtain on the racism in a country where police operate like a mafia and with total impunity.”

Tuesday’s protest was not the first against police violence and Traoré’s death. But until this week, the Traoré case had not widely resonated outside of activist circles, according to French sociologist Mathieu Zagrodzki.

“We are seeing a coalescing of what’s happening here and what’s happening in America,” Zagrodzki, a researcher at Center for Sociological Research on Law and Criminal Justice Institutions, told the newspaper Libération. “The George Floyd case is finding a very strong echo in France.”

Nineteen-year-old Jennifer Curier and her friends came out to the rally to support justice for Traoré. Curier said racism is as much of a problem in France as in the U.S.

“There is no justice in France, either,” she said. “And France is very hypocritical about racism. They always denounce what happens in the U.S. — like, ‘oh look, they are killing black people, this is not good.’ But we have our own case [Traoré] and they can’t deal with it. We want them to deal with it!”

Standing beside her friend, 22-year-old Iris Champrobert-Medy said just because there are fewer police murders in France does not mean that things are less terrible. “Just because they don’t kill us doesn’t mean there’s no racism,” she said. “It’s just more hidden.”

The protests over Floyd’s death reignited the debate about policing in France’s ethnically diverse suburbs, where for decades black and Arab populations say they have been unfairly treated by police.

Les Misérables, France’s Oscar film entry this year, is a harrowing tale of police provocation and abuse set in the Paris suburb of Montfermeil. Filmmaker Ladj Ly grew up there. The son of immigrants from Mali says the movie is partly based on his own life and experiences.

This week scenes of protest from the U.S. and France fill the French media. Several outlets asked, are the situations in France and the U.S. comparable?

Sociologist Sebastian Roché, author of a book about police in democracy, told newspaper 20 Minutes that in terms of violence there is no comparison.

“American police kill more than a thousand people a year, out of a population of 320 million inhabitants,” he says. “The police in France kill 15 to 20 people in a population of 70 million.”

But other comparisons can be made, says Roché. “Police in the U.S. and France both target minorities,” he says. “We see this during identity controls, the so-called stop and frisk policies.”

In its annual report published this week, the national ombudsman said that young men of Arab and black African background are 20 times more likely to be randomly stopped by the police than the rest of the population.

“The police pick people out based on the color of their skin, on their appearances,” Roché says. That degrades relationships between communities and police and often pushes young people into delinquent behavior, he explains.

Roché points to another difference between U.S. and French cops. There are American police officers who “recognize the reality of the problem, contrary to their French counterparts,” he says, pointing to the many officers who have been kneeling in support for Floyd. “I don’t think I’ve ever seen the police here take the side of victims.”

Roché says officials at the top often deny there is a racism problem in France. He points to an interview last week in Libération with Laurent Nuñez, the top cabinet official at the Interior Ministry, in which Nuñez says he does not believe racism is prevalent within the French police.

“For them the problem doesn’t even exist,” Roché says. “So that’s the heart of the problem. If we don’t recognize that it’s there, how can we make things better?”

Still, when asked if they would want to live in America, protesters Curier and Champrobert-Medy were unequivocal. “Oh never, no!” they insisted.

“It’s a paradox,” said Curier. “In America you can be what you want but you can also be killed by the police or your neighbor because you’re black,” she says. “No thanks, I want to live.”

French protests for Traoré and Floyd continue Thursday night in the French city of Lille.

Liz Theoharis: Organizing the Rich or the Poor? Which America Will Be Ours After the Pandemic?

COVID-19 death toll in U.S. now highest in the world

How much do people around the world...