New Zealand Deputy Prime Minister Winston Peters called for a delay to the planned September general election, given an abrupt reappearance of COVID-19 in the country, increasing pressure on Prime Minister Jacinda Ardern to postpone the vote.

Last week’s resurgence of the infections in Auckland – after the country had been free of infections of the new coronavirus for 102 days – was compromising the ability to hold a “free and fair election” on Sept. 19, Peters, the leader of the New Zealand First party, wrote in a letter to Ardern.

The opposition National Party also wants a delay, hoping that Ardern, who had garnered much praise for crushing the pandemic, would lose some of her lustre once hardships caused by the Auckland lockdown begin to bite.

South Korea accused the leader of a religious sect of violating self-isolation rules and obstructing investigations into the country’s biggest outbreak of new coronavirus in five months.

The capital posted a record 146 new cases, out of which 107 were linked to Sarang Jeil Church led by Rev. Jun Kwang-hoon, a controversial pastor and an outspoken government critic.

The health ministry said it will file a complaint against Jun, accusing him of violating self-isolation rules by participating in a rally on Saturday and “obstructing” epidemiological investigation by failing to submit a full list of church members for testing and tracing.

Hello, this is Arwa Ibrahim in Doha, taking over the blog from my colleague Ted Regencia.

South Korea and the United States will start their annual joint military drills on Tuesday, in what local media said was a two-day delay after a South Korean officer tested positive for the new coronavirus.

The drills will start on Tuesday, “considering the COVID-19 situation,” South Korea’s Joint Chiefs of Staff was quoted by Reuters news agency as saying on Sunday.

The combined drills are closely monitored by North Korea, which calls them a “rehearsal for war.” They have been reduced in recent years to facilitate US negotiations aimed at dismantling Pyongyang’s nuclear programmes.

This year’s exercises will be scaled down, not mobilising US-based troops amid COVID-19 restrictions on the travel of US personnel to South Korea, Reuters said.

Australia, which has been struggling with a resurgence of the coronavirus in two of its largest states, New South Wales and Victoria, has reported a further decline in the number of new infections.

New South Wales reported just five new cases, while Victoria, where masks became compulsory in July after the state became the centre of the country’s largest outbreak, reported 279 new cases on Sunday, along with 16 more deaths.

The daily number of new cases this week has been well below the peak of 725 on August 5. Melbourne, the state’s capital, remains under a strict lockdown.

Amid fears of the spread of the coronavirus disease, protesters gather in Austalia’s city of Brisbane in support of asylum seekers, who are reportedly being detained at a hotel in the city [Darren England/EPA]

A new coronavirus outbreak in New Zealand is still growing, health officials said on Sunday, with the country that had an early triumph over the pandemic recording 13 new cases and putting the September general election in question.

After stifling the virus earlier this year before it became a public health crisis and after 102 days without new infections, an abrupt resurgence last week in Auckland prompted an immediate lockdown of the country’s largest city.

Ardern is expected to resist a delay but has said she will decide by Monday.

In a statement issued on Sunday, Eduardo Ano said that he began self-quarantine on Friday after experiencing flu-like symptoms. He said his test result on Saturday night confirmed that he was infected anew.

Ano, a former military general, is one of the top officials designated by Duterte in the fight against the pandemic.

The number of confirmed coronavirus cases in Germany increased by 625 to 223,453, Reuters news agency reported on Sunday quoting data from the Robert Koch Institute (RKI) for infectious diseases.

The reported death toll remained unchanged at 9,231, the tally showed.

Mexico has recorded at least 6,345 new cases, pushing the total to 517,714, according to the country’s health ministry.

The health ministy also reported an additional 635 new fatalities for a total of 56,543 deaths.

China’s new locally transmitted cases of the novel coronavirus fell to a one-month low as a cluster in the western region of Xinjiang receded, Reuters news agency reported on Sunday citing data released by the country’s health authority.

The number of locally transmitted cases in China dropped to four on August 15, all of which were in Xinjiang, the National Health Commission said in a statement. That compares with eight cases nationwide a day earlier, and is the lowest since July 16.

Asymptomatic cases test positive for the virus, but China does not classify them as confirmed cases until they show clinical symptoms of infection such as a fever or a cough.

In mainland China, the total number of new confirmed infections stood at 19 as of the end of August 15, including so-called imported cases involving travellers arriving from abroad. 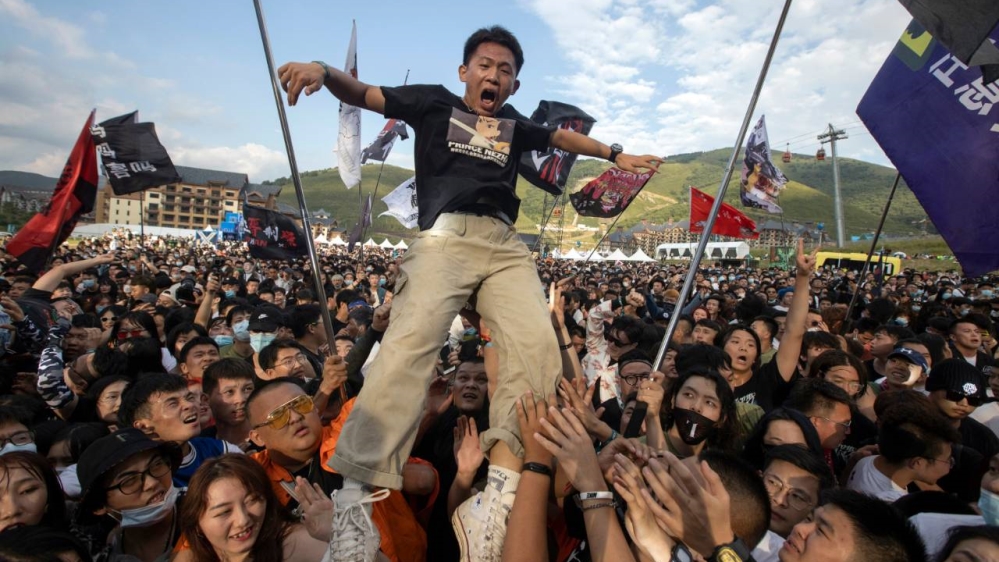 Attendees enjoy a music festival in China’s Hebei Province on Saturday. Large scale events are returning with China having contained the outbreak with majority of new cases arriving from overseas [Ng Han Guan/AP]

South Korea’s new coronavirus cases jumped to 279 on Sunday, topping the 200 level for the first time in five months, due mainly to sporadic local infections in the greater Seoul area, according to Yonhap news agency.

The additional cases of the COVID-19 pandemic raised the country’s total caseload to 15,318, according to the Korea Centers for Disease Control and Prevention (KCDC). Of the new cases, 267 were local transmissions.

There were no additional fatalities reported, keeping the death toll at 305. The fatality rate was 1.99 percent.

The total number of people released from quarantine after making full recoveries stood at 13,910, up nine from the previous day.

Brazil has registered 41,576 cases and 709 deaths due to the novel coronavirus, Reuters news agency reported quoting the health ministry.

00:30 GMT – Trinidad and Tobago ramps up measures against coronavirus

Trinidad and Tobago’s government will implement tougher measures aimed at reducing the spread of the coronavirus after the number of infections increased in August, the prime minister has announced.

The Caribbean nation registered a jump in COVID-19 cases in August after a gradual rise in July, and has now recorded 474 cases and 10 fatalities, according to Reuters News Agency.

“Given how the virus has been behaving in other populations worldwide … we expect that we will be able to control the level of infection in a situation where our parallel (health) system would be able to cope,” Prime Minister Keith Rowley told reporters.

The new measures, which will go into effect on Monday and last 28 days, include the closure of beaches and places of worship, as well as a ban on dining at restaurants and bars.

France is to propose that masks be worn in shared workspaces as the country grapples with a rebound in coronavirus cases that rose again in the past 24 hours to more than 3,000, according to Reuters News Agency.

The health ministry reported 3,310 new coronavirus infections, marking a post-lockdown high for the fourth day in a row.

The number of clusters being investigated increased by 17 to 252, it said in a website update.

The resurgence prompted the UK to impose a 14-day quarantine for people arriving from France, and led the authorities in Paris to expand zones in the capital in which wearing a mask is mandatory outdoors.

For all the key developments from yesterday, August 15, go here.

What will Joe Biden do?