He started off as an action hero, segued into romance in between, then turned to comedy and now it seems is interested in making historicals his forte. Ajay Devgn has constantly reinvented himself throughout his career and that’s the reason he’s still going strong. He hasn’t let the circumstances get to him and has always made sure to give his 100 per cent to each of his roles. His tenacity, his fortitude is something to be admired. We bring you a list of 10 of his best films down the years for your viewing pleasure during this sem-lockdown situation. We hope that it adds to your viewing pleasure.

Zakhm carried shades of Mahesh’s own life. The film won the Nargis Dutt Award for Best Feature Film on National Integration. Ajay plays a music director whose mother (Pooja Bhatt) was a Muslim but chose to live as a Hindu after marrying a Hindu man. He learns her secret as a child but respects her wishes. Years later, she’s burnt by fundamentalists in a riot and succumbs to the injuries. Ironically, her younger son (Akshay Anand) is a fundamentalist himself and is against communal harmony. When he learns the truth about his mother, he decides to stand by his brother and fulfil their mother’s wish of being buried with Muslim rites. It was a poignant film depicting real-life concerns. Made against the backdrop of Mumbai bombings, it did ask some pertinent questions indeed and preached peace and goodwill. Ajay gave a restrained performance as the elder brother who has to make his volatile sibling see the light of the day.

The rumours of Salman and Aishwarya Rai’s affair were at the peak when the film was released. It was said to be inspired by Woh Saat Din (1983), starring Naseeruddin Shah, Anil Kapoor and Padmini Kolhapure. Nandini (Aishwarya Rai Bachchan) is the daughter of Pandit Darbar (Vikram Gokhale), a respected name in the Indian classical field. Sameer (Salman Khan), an NRI comes to learn classical vocals from him and falls for Nandini. Meanwhile, her father arranges for Nandini to be married to Vanraj (Ajay Devgn). She’s heartbroken when Sameer leaves at her father’s insistence and reluctantly marries Vanraj. He’s initially enraged when he learns she loves another but later vows to unite them together. However, seeing his caring attitude she begins loving him and goes back to him even after finding Sameer in Europe. Salman and Aishwarya looked like a made for each other couple in the film and Ajay’s brooding presence was the icing on the cake. Ismail Darbar made a fine album containing folk tunes which remains hugely popular even now.

Throughout his childhood, Bhagat Singh witnessed cruel atrocities being committed by the British over his fellow Indians. Incidents such as the Jallianwala Bagh massacre in 1919, where British General Dyer opened fire on a large group of people, killing men, women and even children in the process, left a deep impact on his mind He initially followed Gandhi’s non-violent precepts but later realised he armed revolution would serve his purposes better. Bhagat avenged the death of Lala Lajpat Rai who was beaten to death by assassinating an officer named Saunders. He later bombed the Indian Central Legislative Assembly as a protest against the Public Safety Bill and the Trade Disputes Act. The bombs were designed to make a lot of noise and smoke and not to kill and Singh and Batukeshwar Dutt could have escaped but chose to let themselves be arrested. Bhagat made headlines even while in prison as he and other prisoners undertook a fast to death to improve the conditions of the Indian political prisoners. After being proven guilty, Bhagat was sentenced to death which he accepted with a smile on his face, knowing the fact that he is sacrificing his life for the cause of the country. Ajay Devgn portrayed the role of the legendary freedom fighter while Sukhdev was played by Sushant Singh and Chandrashekhar Azad was played by Akhilendra Mishra. The film was praised for bringing to life the ethos of our brave freedom fighters.

Company ranks among one of Ram Gopal Verma’s best and one of the best crime films of Indian cinema. Chandu (Vivek Oberoi) is a small-time goon who makes it big as the right hand of Malik (Ajay Devgn). The central character of the film, Malik, is a mafia leader who sets up the most successful crime organization in Mumbai by the name of Company. Malik and Chandu take the company to global heights but somewhere along the way their friendship suffers. A small misunderstanding between them turns into a large scale mafia war. Ajay Devgan formidably underplays his part. He’s cold, calculative, the very essence of a mafia don. Vivek Oberoi delivered a knockout debut performance as well.

Ajay plays an idealistic police officer Amit Kumar posted in the crime-ridden West Champaran district of Bihar. He gets to know that the system is rotten to the core at every turn and tries his hardest to reform the police force under him. While the men admire his honesty and integrity, they laugh at his naivete behind his back. There’s a strong police-mafia nexus in the area and Amit warns his men to desist consorting with the criminals. Enraged by the constant pressure put on them by the corrupt politicians, a section of officers belonging to Amit’s command pour battery acid in the eyes of some goons. This act of vigilante justice is soon mimicked across the state by other policemen as they vent out years of suppression. While the crime rate does take a drop as criminals go into hiding, Amit warns that such practices will lead to a state of anarchy but despite his best intentions the tragedy plays itself out.

Ajay Devgn played the antagonist in this multi-starrer and was admired for his role. Anant Srivastav (Amitabh) is an honest DCP who must complete his duty against all odds. He hasn’t risen to the heights he deserved because of his honest nature. He has been given a job to bring an alleged terrorist Ansari (Atul Kulkarni) to Mumbai. He is accompanied by Sub Inspector Ashwin Gupte (Tusshar Kapoor), Inspector Shekhar Verma (Akshay Kumar), and Constable Kamlesh Sawant (Kamlesh Sawant). The team meets Mahalakshmi (Aishwarya), a school teacher who helps them out. Along the way, the team learns that Ajay Devgn (Yashwant Angre), a former police inspector turned criminal, ACP Naidu (Prakash Raj), Minister Deodhar (Sabyasachi Chakravarthy) have all joined hands to cover a criminal conspiracy. It was Amitabh versus Ajay Devgn show all the way and ultimately showed the triumph of good over evil.

At the beginning of his career, if someone had told Ajay that 15 years down the line he would be acting in a Shakespeare adaptation, he would have laughed it all off as a joke. It took a Vishal Bhardwaj to visualise him as Othello. Set in the badlands of North India, the film plays out the tragic tale of Iago/Langda Tyagi’s (Saif Ali Khan) betrayal. Tyagi feels he’s been ignored and slighted by his friend because of his handicap and wants revenge. He plots to bring him down by sowing seeds of discontent. Omi/ Othello begins to suspect his wife Dolly/Desdemona (Kareena Kapoor Khan) of infidelity and in a fit of rage kills her. Tyagi, the perpetrator behind all this too is killed by his own wife while Omi commits suicide in remorse. Only Keshu/ Cassius (Vivek Oberoi) is left alive in the end, looking at it all with muted grief. Ajay brought forth both the ruthlessness and the vulnerability of Othello through his power-packed performance and made the viewers root for his character. One can see the pain and the agony amply reflected in his eyes during the tragic climax. He also perfected the use of Khariboli dialect to bring a level of authenticity to his character. 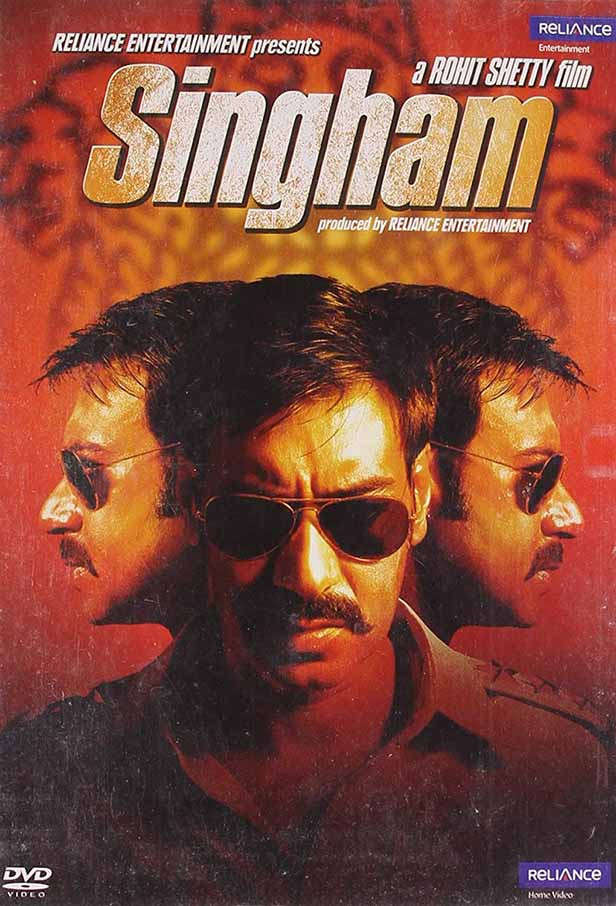 In many aspects, Singham reminds you of the OTT cop dramas of the ’70s and the ’80s where a one-man-army of sorts took up arms against a corrupt system. One can say it’s old wine in a new bottle served to us by Rohit Shetty. Bajirao Singham (Ajay Devgn) is an honest police officer in charge of the Shivgarh police station. He resolves most of the problems in his town through talks and without resorting to the force of law, thereby gaining much admiration and love from the villagers. He’s pitted against a corrupt politician, Jaikant Shikre (Prakash Raj), hailing from Goa. Jaikant has him transferred to Goa in order to teach him a lesson but Singham overcomes all odds and turns the tables, uniting the police force in the process. Ajay Devgn shone as the protagonist and the film became a blockbuster success.

According to reports, on July 16, 1981, the IT officials raided the house of a businessman and Congress MLA Sardar Inder Singh in Kanpur. 90 experienced officers under the leadership of the then Income Tax Commissioner of Lucknow, Sharda Prasad Pandey, carried out the longest IT raid recorded till date. Some 200 police personnel were said to be present there for the safety of the IT officials. Ajay Devgn plays Amay Patnaik, an income tax officer known for his integrity. He’s a stickler for rules and is someone who has been transferred for more times than he cares to count. He gets posted to Lucknow and fate brings him the biggest anonymous tip of his life on a platter. It’s so hot that it could bring down the empire of the local big shot politician, Rameshwar Singh (Saurabh Shukla) fondly known as Rajaji. He acts on his instincts and makes sure he has a cast-iron case before making his move. He’s thwarted initially in his efforts but later his source comes true even amidst the chaos and he’s able to perform his duties to the fullest, bringing in the richest haul from an IT raid of that era in the process. The film got praised for its stand-off scenes between Ajay Devgn and Saurabh Shukla.

Tanhaji chronicles the capture of the Kondhana Fort by the Marathas. It was of strategic importance to Aurangzeb as from there he could keep an eye over the whole South region. Shivaji had to cede the fort to him following the treaty of Purandar and was desperate to get it back. His trusted aide Tanhaji Malusare along with his band of diehard soldiers captured the fort by climbing over seemingly impregnable walls and defeated the Rajput commander Udaybhan who was in charge of the fort. Tanhaji lost his life gaining the objective and the fort was renamed as Sinhagad in his memory by Shivaji as he had fought like a lion. The grand scale of the war drama, the creatively crafted battle scenes, and the final confrontation between Tanhaji and Udaybhan made it an edge-of-the-seat thriller. Ajay Devgn brought to life Tanhaji’s intensity, his devotion to Shivaji and his undying love for his motherland with utmost conviction. Saif Ali Khan’ and Shar Kelkar’s performances too came in for a lot of praise.

Can You Make Your Penis Bigger? 8 Ways to Enhance Penis Size.