While science fiction hasn’t been a much in demand genre for Bollywood filmmakers, they have been indulging in making films on the subject on and off since the ’50s. Mostly, such films concentrate more on using the ‘science’ part to make abundant use of special effects and trick photography. Presenting a list of some of the most well-known works from the genre down the ages for your viewing pleasure this quarantine.

While trying to create a cure for cancer a scientist inadvertently creates a serum which can provide invisibility. Ashok Kumar imbibes it by mistake and has to remain invisible until the antidote is found. Meanwhile, the villain (Pran), commits a lot of crimes and somehow or an invisible man gets blamed for them. How Ashok uses his new-found powers to clear his name and also to win the heart of his lady love (Nalini Jaywant) forms the crux of the story. The film was a precursor to many such films involving invisibility, including Elaan, Mr India, etc, 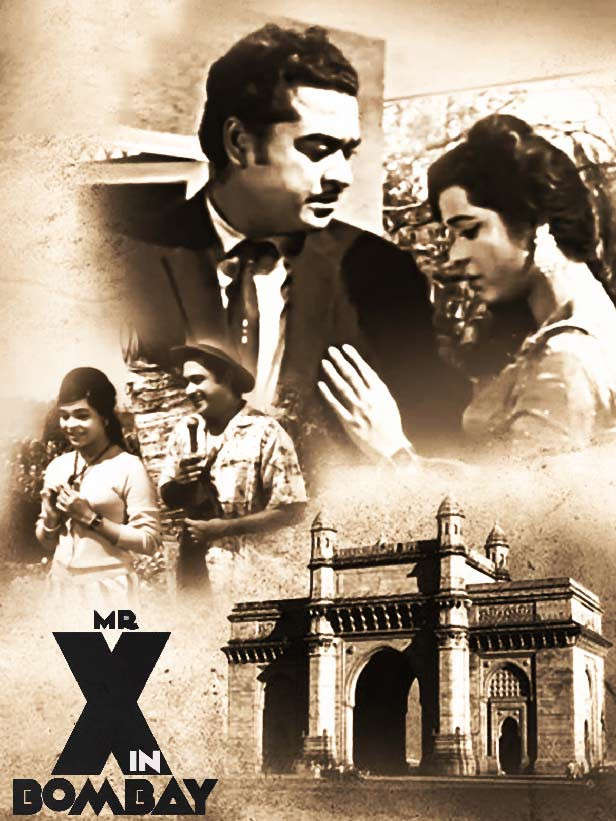 This comedy thriller might not be high on science but was high on entertainment, alright. It featured a flying car, among other things. Don’t ask us what invisibility has to do with levitation. When he’s spurned by his girlfriend, a dejected Kishore Kumar drinks what he thinks is poison but in actuality, it’s a potion which makes him invisible. He begins to ‘haunt’ his girlfriend, who thinks her lover’s spirit has come to make her feel guilty. How he saves her and her scientist father, from the clutches of a blackmailer forms the crux of the film. The film had strong emotional content and had the evergreen Kishore number Mere mehboob qayamat hogi as well. 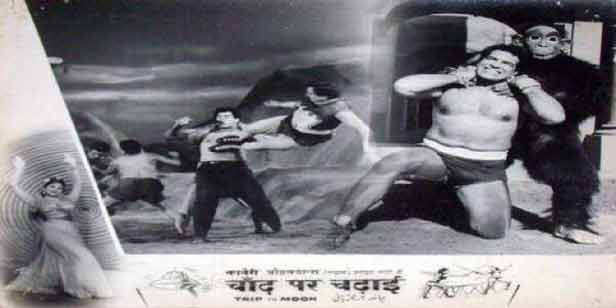 Two years before the Americans did it in real life, Dara Singh did it in reel. The film, which can be said to be inspired by the novel A Princess of Mars by Edgar Rice Burroughs. Dara Singh and Bhagwan are cousins and happen to be astronauts. When their spacecraft crashlands on the surface of the moon, they find themselves experiencing different adventures, including fighting a gorilla and a dinosaur-like creature. They have many hair-raising escapades. Dara Singh also finds himself dragged into a love triangle when he finds himself the centre of attraction of Princess Shimoga, earning the ire of warrior chieftain Barahatu (Anwar Hussain), who also likes her. This was a trippy sci-fi comedy at its best.

Naresh Kumar Saxena (Vinod Mehra) is a photo-journalist out to expose the underworld. He’s captured with his friend Shyam (Rajendra Nath) and put in jail by the goons. There, he meets a professor (Janaki Das), who says he has made a ring which makes the wearer invisible. One day, taking a chance, Naresh takes off his clothes, puts the ring in his mouth and turns invisible. This is witnessed by another prisoner, Ram Singh (Vinod Khanna), who later starts working for the bad guys. Naresh uses his power to help his sweetheart Mala (Rekha), avenge the death of her father. He also aids the CBI to nab criminals. The twist in the tail was that Naresh has to be nude to be invisible and when he turns visible then too he’s naked. Basically, someone has to be around to lend him clothes and the director took utmost liberty with the scenario, leading to some hilarious situations. 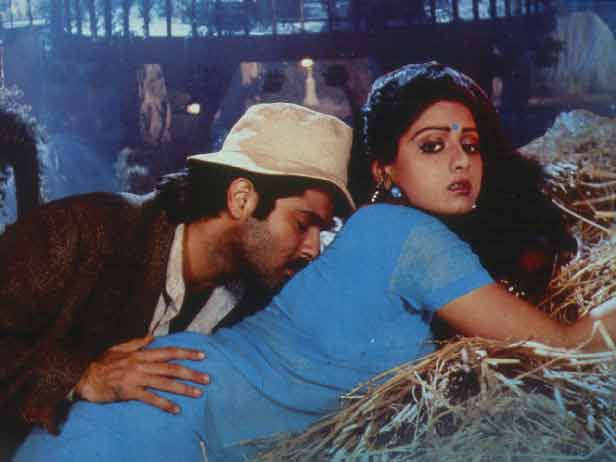 Arun (Anil Kapoor), an orphan himself, uses his large mansion for the upkeep of several orphaned street children. To make ends meet, he rents one of the rooms to Seema (Sridevi), a journalist. Through a family friend, Dr Sinha (Ashok Kumar), he learns that his father was working on a device that can make people invisible. He goes to his father’s dilapidated laboratory and finds the watch. The only flaw in the device is that a person is visible under red light. Mogambo (Amrish Puri) is a megalomaniac general who wants to conquer the world. When he hears of the device, he wants it at all costs. How Arun, with the help of the device, his wards, and Seema thwarts Mogambo’s plans and saves India is more or less the plot of the film. Amrish Puri’s dialogue from the film, Mogambo khush hua is still famous today. Anil Kapoor and Sridevi’s chemistry in the film was much admired. Their song, Kate nahi katte, where Sridevi romances an ‘invisible’ Mr India, is one of the most sultry songs ever picturised. Plenty of action, comedy and special effects combined with an emotional core made the film a winner all the way. 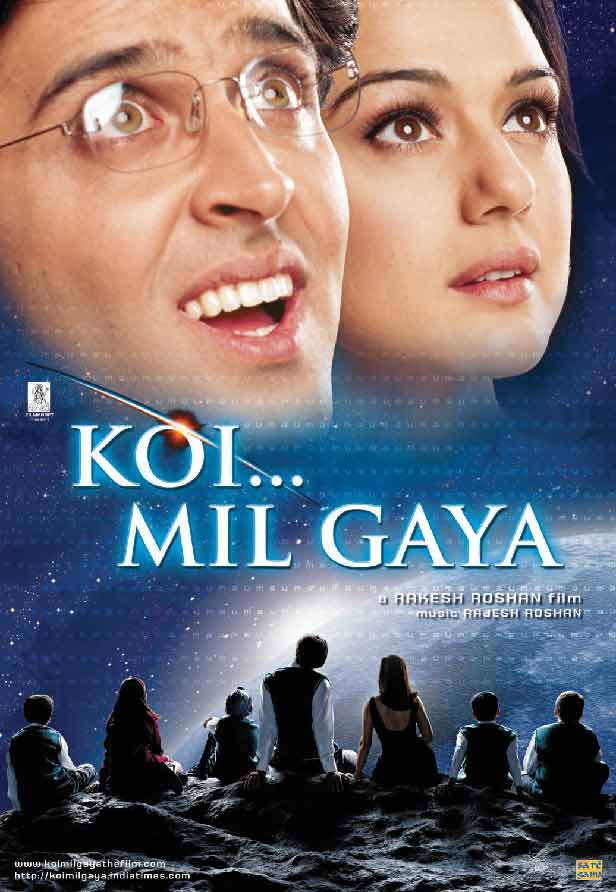 Rohit Mehra (Hrithik Roshan) is a mentally disabled kid living alone with his mother Sonia (Rekha) in Kasauli. His father Sanjay Mehra (Rakesh Roshan), used to believe in aliens and has made a computer that could communicate with the aliens. One day, Rohit uses the computer and inadvertently sends a signal to outer space. A mothership enters the earth and aliens do come but they leave sensing danger, leaving one behind. Rohit and his friends befriend the alien, calling him Jadoo. Jadoo cures Rohit through his powers. Not only does his eyesight improve, he slowly regains the full use of his brains as well and in the end gets a genius-level IQ. He has developed a crush on Nisha (Preity Zinta), who is new to Kasauli and now, fully normal, he proposes to her. When the authorities learn about Jadoo, they want to capture it and send it to America. But Rohit rescues him and helps him go back to his home planet. Rohit loses his powers after Jadoo goes away but later, Jadoo restores them back permanently. The film was super successful and spawned two sequels, Krrish (2006) and Krrish (2013), which continued the adventures of Rohit’s son, Krishna Mehra. 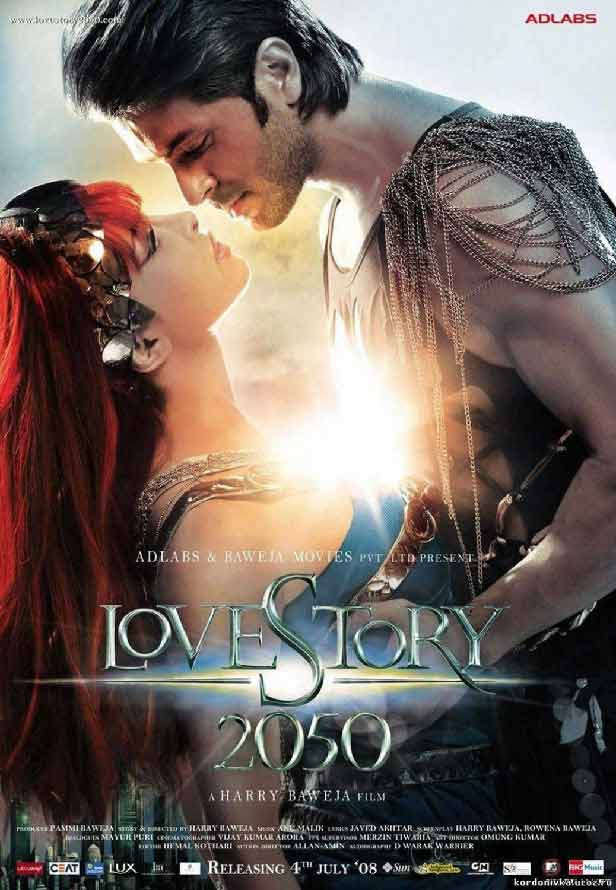 The film is a futuristic love story concerning time travel and reincarnation. Karan (Harman Baweja) loves Sana (Priyanka Chopra), who wishes to travel to the future in a time machine built by professor Yatinder (Boman Irani). She’s killed before that. To honour her wishes, Karan travels to 2050 and is surprised to find a lookalike of hers called Ziesha, who is actually the reincarnation of Sana. How Karan convinces her of that and regains Sana in his life forms the crux of the film. 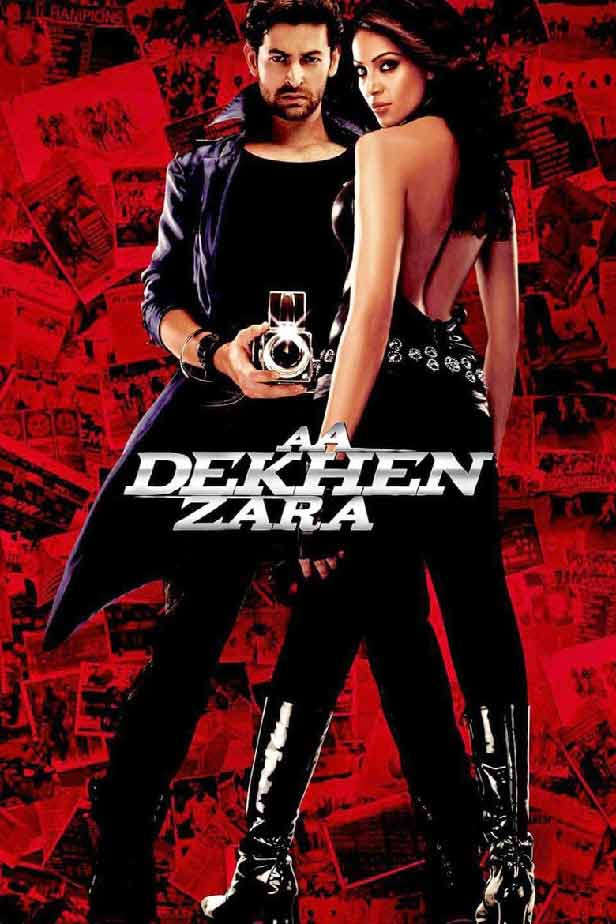 Ray Acharya (Neil Nitin Mukesh), is a down-at-his-luck photographer, whose life changes when he finds a special camera belonging to his late grandfather. The camera has the ability to click future events and through its help, Ray makes money out of lotteries and races. He also manages to get the girl of his dreams, Simi (Bipasha Basu), through it. Soon, however, both the underworld and the authorities get wind of the camera and want it. There begins a cat and mouse game where Ray has to dodge enemies from everywhere. But would he be able to save himself from the ultimate adversary — death? 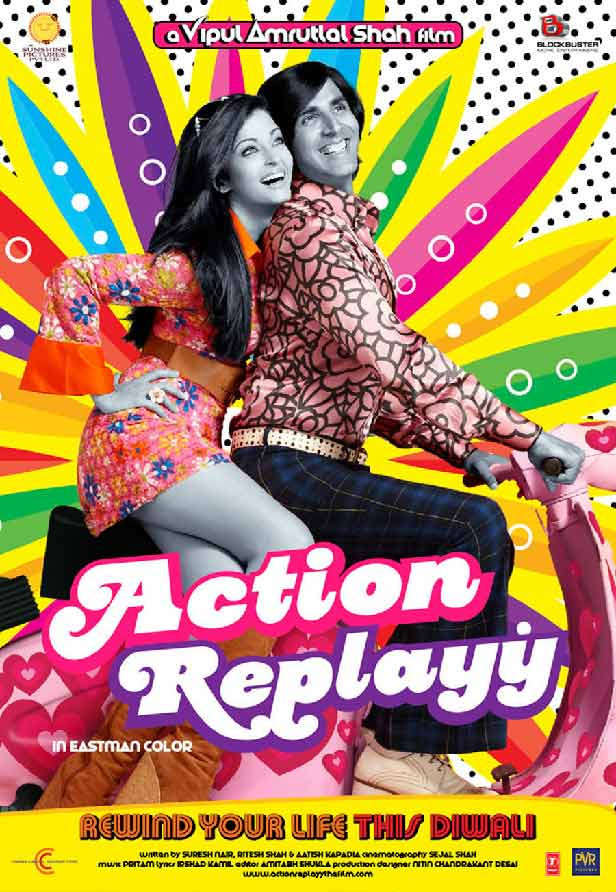 The film’s premise is based on the American hit Back To The Future (1985). Bunty (Aditya Roy Kapoor), does not want to get married because of the loveless relationship between his parents Kishen (Akshay Kumar) and Mala (Aishwarya Rai Bachchan). Bunty’s girlfriend, Tanya (Sudeepa Singh), takes Bunty to her grandfather, Anthony Gonsalves (Randhir Kapoor), a scientist who is working on a time machine. Bunty uses the time machine to go back in time and visit the era when his parents were young. He transforms his geeky looking dad into a cool dude, sets about having his parents fall in love and even helps them elope. All this alters the future, as his always bickering parents are suddenly a very much in love couple. Mission accomplished, Bunty proceeds to propose to Tanya. 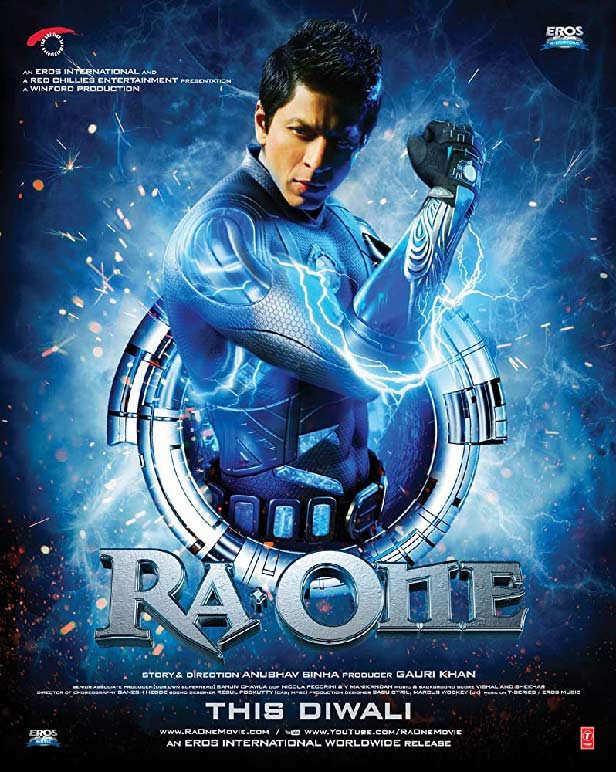 Shekhar Subramanium (Shah Rukh Khan), a game designer who creates a motion sensor-based game where the antagonist (Ra.One) is more powerful than the protagonist (G.One). His son Prateek (Armaan Verma) takes to the game and soon becomes an expert. When Ra.One senses that Lucifer — Prateek — can kill him in the game, he enters the real world and starts to find Lucifer. Shekhar gives up his life to save his son’s life. Later, Prateek, with the help of one of his father’s colleagues, manages to bring G.One in the real world. G.One looks like his father as he was modelled after him. G.One, despite not being as powerful as Ra.One, is more intelligent and manages to defeat Ra.One with Prateek’s help in both the real and the virtual world. The film boasted of never-seen-before computer graphics and wasn’t able to make as big a profit as was expected because of his humongous budget. 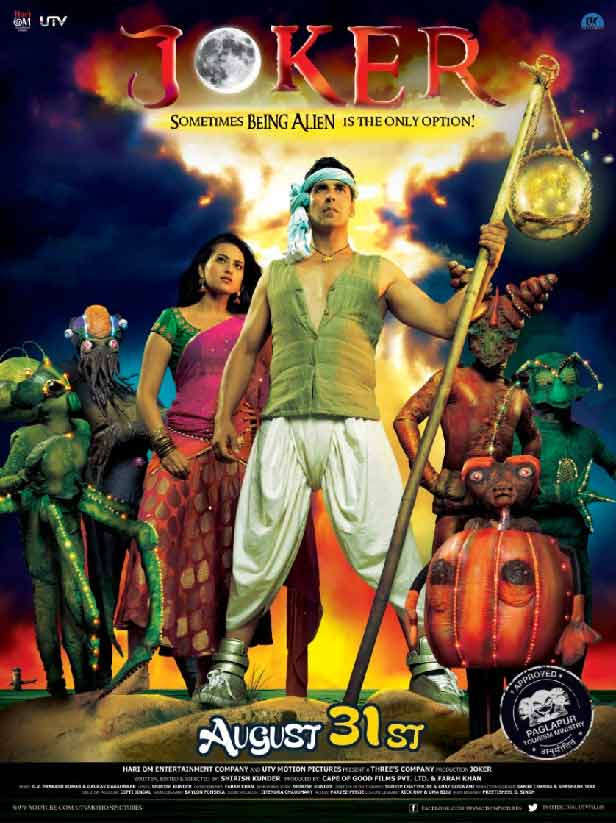 Agastya (Akshay Kumar) is a scientist, working on the development of a communication system, to communicate with aliens. When he finds out that his ancestral village, Pagalpur, is still underdeveloped as it isn’t on the map of India, he hits upon the idea of faking crop circles and creates a buzz that Pagalpur is a hotspot for alien activity. Soon, politicians come swarming from over and as a result, his village gets a makeover. The prank pays off in unexpected ways, however, when the real aliens decide to visit. 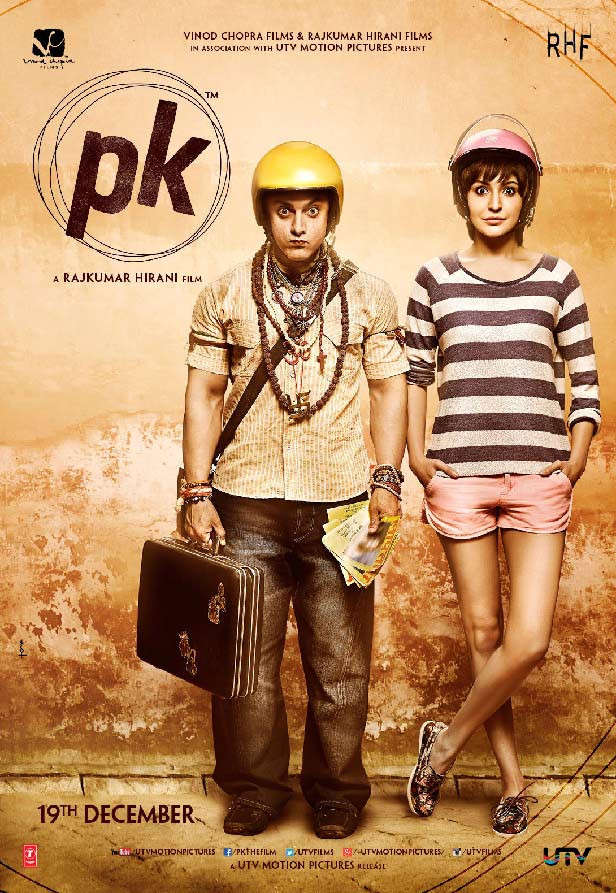 Pk is surely a unique never-before-seen product to have come out of Indian cinema. It stars Aamir Khan as an alien called PK who gets stranded on earth and is fascinated with everything around him. PK takes a keen interest in Indian customs and religions and his observations make people confront absurdities that lie within our common beliefs and practices. Anushka Sharma who plays a journalist called Jagat Janani in the film is shown to be in love with the like-minded Pakistani national played by Sushant Singh Rajput. Jagat Janani helps PK come into the limelight and ultimately helps him find his remote so he can contact people from his planet and get back home.

Sabres Survive Senators in Overtime – Reliving the May 5, 2006 Classic