Basu Chatterjee, who passed away today, was a highly prolific filmmaker. He was a versatile director who was able to do justice to many genres, though his forte was romantic comedies. He made films which depicted the life of the common people. Their problems, their heartaches, victories and small joys were the real heroes in his stories. Though he didn’t shy from working with commercial stars — having worked with the likes of Dharmendra, Hema Malini and even Amitabh Bachchan, actors like Amol Palekar, Vidya Sinha, or Shabana Azmi were seen more in his films. He was one of the pioneers of the middle-of-the-road cinema movement and had a large hand in making the genre popular. Presenting a list of some of his best films down the years in his remembrance.

The film was a remake of hit Marathi movie Mumbaicha Jawai (1970). It speaks of how congested homes in Mumbai can’t provide privacy to married couples and the lack of personal space sometimes causes tensions between couples. Malti (Jaya) is a good-natured lass living in a village. Her marriage is fixed with Ram (Anil Dhawan) through a matchmaker. The couple like each other and everyone is happy. Initially, Malti is all excited with the thought of living in a big city with her husband. But her happiness gets shattered when she actually comes to live there and finds she has to share space with his parents, two brothers, one sister-in-law, three uncles, and two aunts who are crammed together in a small apartment. Accustomed to wide open spaces of her village and roomy houses, the whole thing comes as a culture shock to her. The young couple has to sleep in the kitchen and can’t get intimate because of lack of privacy. She has had enough and feels she can’t continue with this kind of existence. She wants to go back to her father’s house but when she finds out that everyone is willing to move out to afford them some privacy, she realises the love of the loved ones is more important than lack of space. 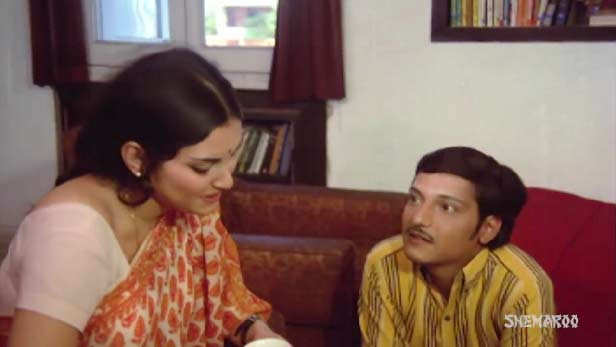 Rajnigandha, which was based on a short story Yahi Sach Hai by noted writer Mannu Bhandari catapulted Vidya Sinha to instant fame. Refreshingly different from the arm-candy heroines rampant in that era, she played a modern woman who is caught between two lovers and takes a while to make up her mind about whom to marry. It was devoid of all melodrama and brought the lives of three ordinary, middle-class people in sharp focus. Vidya needn’t have worried about her acting credentials as the critics and the masses alike couldn’t stop exclaiming how natural she looked in front of the camera. The film, which also marked the debut of Amol Palekar, had two wonderful songs, Rajnigandha phool tumhare sung by Lata Mangeshkar and Kai baar yuhi dekha hai sung by Mukesh, who won the National Award for Best Playback Singer for it.

The film had Amol Palekar playing a man lacking in confidence who hires a life coach to teach him how to propose to a girl. Palekar played a mousy introvert in the film while Vidya played a woman fully aware of his intentions while waiting for him to make the first move. Again, the middle-class milieu of the film helped it make a home in the hearts of the masses. The film boasted some great music composed by Salil Chaudhury. Fans of Hindi film music got a taste of South maestro Yesudas’ genius in the Yesudas-Asha Bhosle duet, Jaaneman jaaneman tere do nayan which incidentally was filmed on Dharmendra and Hema Malini. 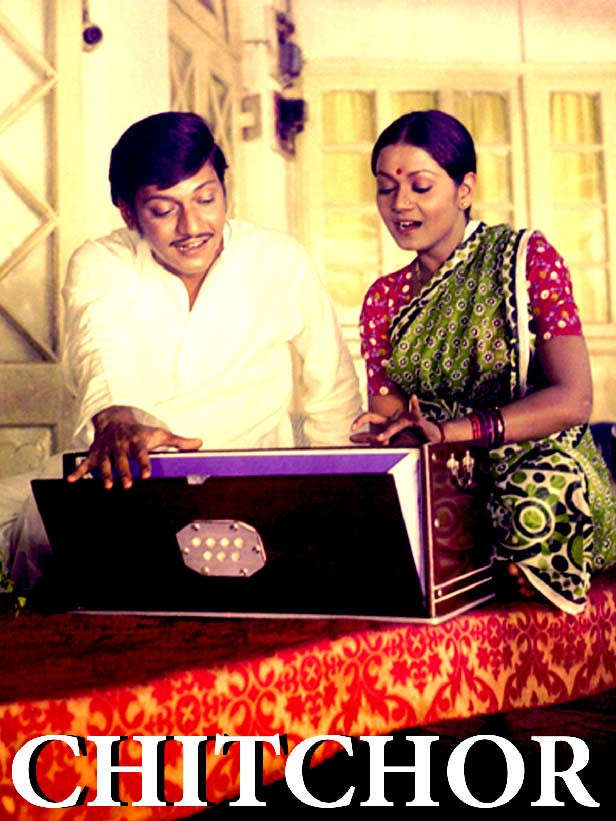 It was a romantic comedy involving mistaken identities. Geeta’s (Zarina Wahab) elder sister Meera writes to her family about an eligible bachelor Sunil (Vijayendra Ghatage), an engineer who is about to come to a village for some construction work. Pitamber Chaudhri (A.K. Hangal) and his wife (Dina Pathak) are happy with the news. When overseer Vinod (Amol Palekar) lands up in the village, he’s mistaken for Sunil. The parents take a liking to him and so does Geeta. He even starts teaching her music. They fall in love and she wants to marry him. But Sunil’s arrival changes all equations as he too starts liking her and has no issues about marrying her. The film was shot in picturesque locales of Mahabaleshwar and Panchgani. It had some lovely music by Ravindra Jain comprising songs like Jab deep jale aana, Gori tera gaon bada pyara, and Tu jo mere sur mein. It was later remade by Rajshri as Main Prem Ki Deewani Hoon. 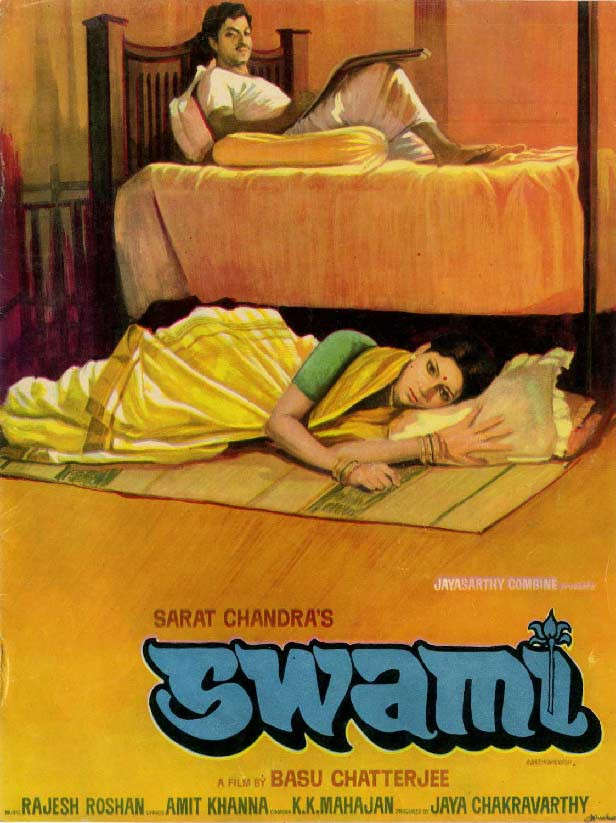 The film was adapted from a Sarat Chandra novel of the same name. Saudamini “Mini” (Shabana Azmi) has grown up idolising her forward-thinking uncle (Utpal Dutt). Like him, she loves to read Western literature, likes Western philosophers and is an atheist at heart. Her god-fearing mother doesn’t like her growing intimacy with the neighbourhood boy Naren (Vikram), who is smitten by her beauty as well as her intellect but takes a tremendously long time to make his intentions clear. Mini gets married off to a wealthy wheat trader Ghanshyam (Girish Karnad). He’s the epitome of patience and doesn’t react to her tantrums and mood swings. In her mind, she has become a prisoner in her husband’s house and wants to break free. But it’s only when she takes the actual step does she begin to realise her foolishness. She understands the largeness of heart of her husband and the last scene, where he asks her to come back home, completes her transformation from a rebellious girl to a wife. While Utpal Dutt and Girish Karnad shone in their individual ways, the film belonged to Shabana Azmi. Her quicksilver expressions carried the day. 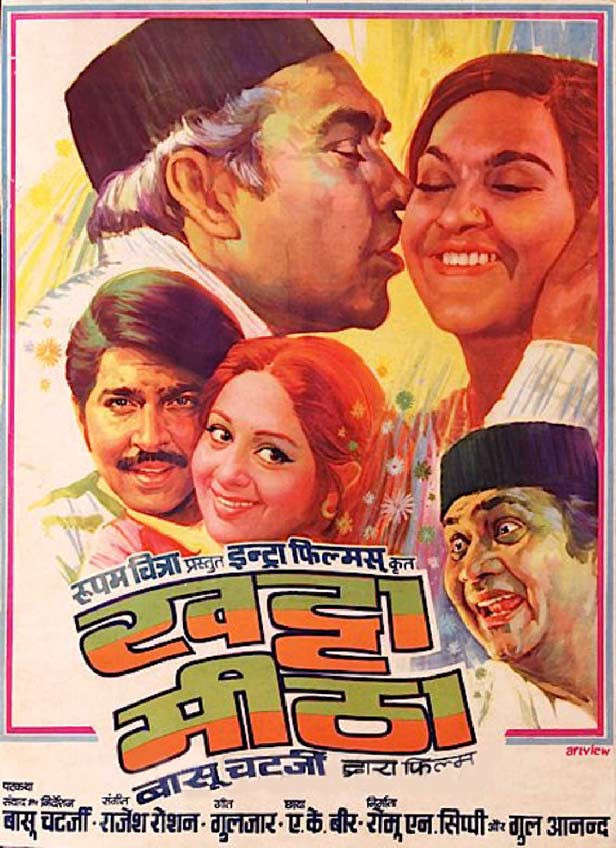 It was loosely based on the 1968 American movie Yours, Mine and Ours. The story revolved around a middle-aged widower (Ashok Kumar) marrying another middle-aged widow (Pearl Padamsee). Both have children from their former marriages and the youngsters find it hard to adjust to each other. Quarrels take place between them with the parents trying to patch up the things and keep the family united. Nargis’ son Feroze (Rakesh Roshan) falls in love with Zarine (Bindiya Goswami) who is the daughter of a rich businessman (Pradeep Kumar). He tries to harass the family, which thankfully, comes together as one and the matter gets solved. The film ends with everyone learning to live in harmony. 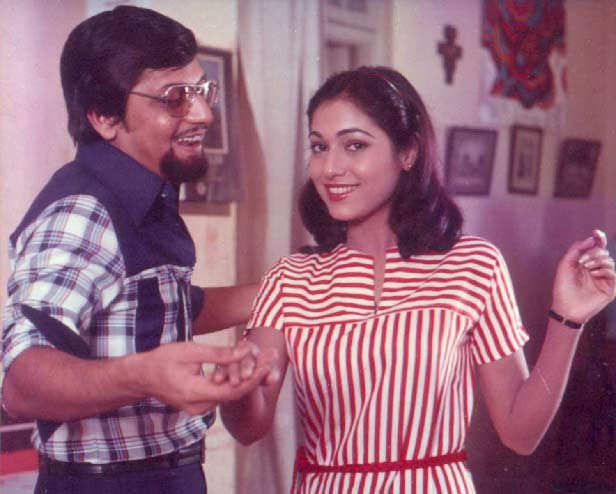 The film had a Christian setting and was all about the courtship of Amol Palekar and Tina Munim, assisted by her Uncle, played by David. Rosie Perreira (Pearl Padamsee) is a widow living with her violinist son, Shabi (Ranjit Chowdhry) and daughter, Nancy (Tina Munim). She would like her daughter to get married soon. Nancy and her Uncle Tom (David) meet Tony Braganza (Amol Palekar) daily in the morning Bandra local train. They get acquainted and soon start seeing each other. But Tony is unduly shy and hesitant and that irks Rosie. She starts looking for a match elsewhere. However, timely intervention by Tom sets things right. The film had some lovely songs like Suniye kahiye kahiye suniye, Na bole tum na maine kuch kaha and Uthe sabke kadam tuned by Rakesh Roshan. 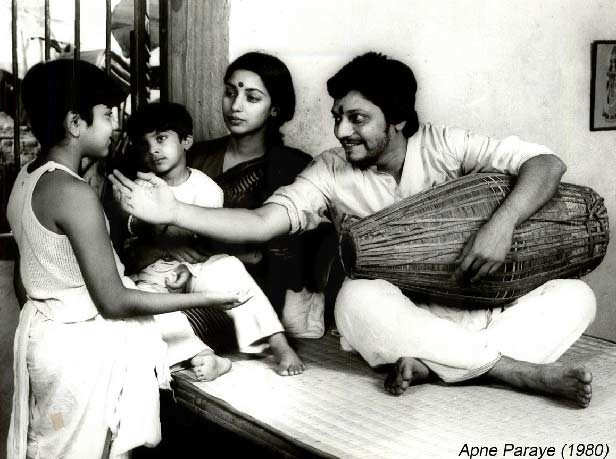 The film is based on Sarat Chandra’s novel Nishkriti. Utpal Dutt, a senior advocate based in Kolkata dotes on his younger cousin, Chander (Amol Palekar). Chander is a bit of a slacker, not interested in taking a permanent job and is only interested in music. His wife, Sheela (Shabana Azmi), practically runs the household and is considered quite strict. The advocate’s wife Siddheswari (Ashalata) too likes them both. Everything is fine till Utpal Dutt’s younger brother Haish (Girish Karnad) lands up with his wife Naintara (Bharti Achrekar). Naintara’s gets jealous of Sheela’s hold on the household and plots against her. She gets Sheela and Chander thrown out of the house with her husband’s help. Harish also files a suit against them. Suddenly, life is on a downward spiral for them. It’s only on the intervention of the elder brother that things smooth up once more. The rivalries and politics of a joint family are amply brought out in the film. 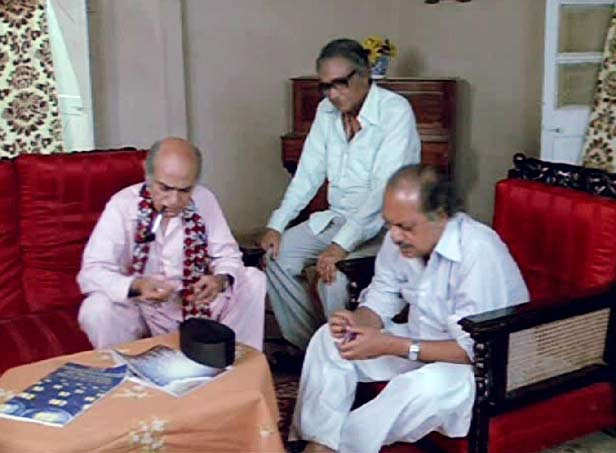 The film is loosely based on the American comedy Boys’ Night Out (1962) and involves three old men who narrate their fantasies of getting lucky with a young girl when in truth nothing has happened. Om Prakash Chaudhary, Jagdishbhai, and Inder Sen, played by Ashok Kumar, Utpal Dutt and AK Hangal respectively are three men in their sixties who like cigarettes, wine and women. While they secretly indulge in the first two vices, the third kind of eludes them. They plan a getaway where they hope to procure a girl and the driver they hire for the trip, Ravi (Mithun Chakraborty) takes them to Goa as he wants to meet his girlfriend Anita (Rati Agnihotri) residing there. Anita is easygoing and bohemian and all three get bitten by her charms. They all plan to get lucky with her but the encounters end in fiascos. Of course, being men they don’t admit to it and spice up the narratives. In the end, they do feel guilty about not behaving like gentlemen and redeem themselves by uniting Ravi and Anita and by helping Ravi tide over his financial difficulties. Though it was a sex comedy, never once did it cross the bounds of decency. Ashok Kumar, Utpal Dutt and AK Hangal were superb as lecherous old men. Rati was just right for her role and so was Mithun. 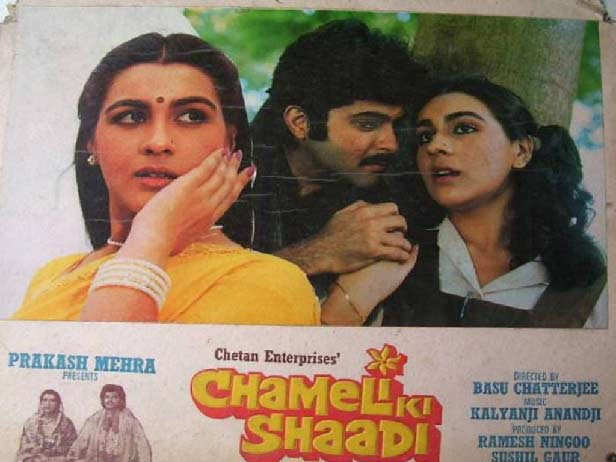 The film made a stand against casteism and had a feminist heroine, a novelty in those days. Charandas (Anil Kapoor), is under the influence of Mastram Pahelwan (Om Prakash) and wants to dedicate his life to being a wrestler. All his vows of celibacy go for a toss when he espies Chameli (Amrita Singh), the daughter of the local coal trader Kallumal (Pankaj Kapur). The duo fall in love and decide to get married but both sets of parents are dead against the match as they belong to different castes. They take the help of Advocate Harish (Amjad Khan) to resolve the dilemma. He advises them to elope and get married. And later convinces both the girl’s father and the boy’s brother why the alliance would be politically beneficial to them both. Amrita Singh was pure gold as an overgrown schoolgirl who has failed in 8th four times and who bashes up her relatives like a real freestyle wrestler when she overhears them making plans of bumping off her boyfriend. Anil Kapoor let her take the centre stage and was good as a former pahelwan. Amjad Khan got the best lines as the street smart lawyer who knows the weaknesses of people and uses his knowledge to get things done.

Kelly Marie Tran on Raya and the Last...

A Place in the Sun newcomer Lee Juggurnauth...

“You May Never See Those Numbers Again”: Can...

Trump and Fauci Are Now Openly At...