Thanks to the present lockdown created to control the spread of COVID 19 pandemic, we are all forced to stay at home. We know it’s not easy but it’s for our own good and should swallow it like a bitter pill and move on. Being house-bound does provide one with an opportunity to revisit our favourite movies. There’s no substitute for a house filled with laughter and our filmmakers recognised that and often set comedies within a home. The single setting didn’t come in the way of a good script and made the viewers forget that they are watching a film where characters don’t much go outside. Here’s presenting a list of Bollywood comedies with houses as backdrops. You’re sure to find good cheer watching these films — much needed in these gloomy times.

It is based on the Bengali story Pasher Bari by Arun Chowdhury, which was made into a film of the same name in 1952 by director Sudhir Mukherjee. Bhola (Sunil Dutt) leaves his uncle’s (Om Prakash) house when he learns that the uncle is planning to get married again even though his wife is very much alive. He comes and lives with his aunt (Dulari) and is pleasantly surprised to find a beautiful girl Bindu (Saira Banu) living in the house next door. Bindu loves music and in bid to impress her, engages the services of his friend Vidyapati (Kishore Kumar) an accomplished singer. Vidyapati tries to train him as a singer but finds out Bhola just can’t keep a tune. He then hits upon the idea of singing the song himself with Bhola lip-synching the words. This leads to the famous Mere saamne waali khidki mein sequence, where Bindu first hears Bhola and gets impressed by his voice. She has a music teacher, Master Pillai (Mehmood), who too is besotted by her and who engages in the famous duel Ek chatur naar, sung by Manna Dey and Kishore Kumar. When his secret gets found out, Bindu first agrees to marry Bhola’s uncle, and then Masterji. But true love does win in the end and the couple unites. 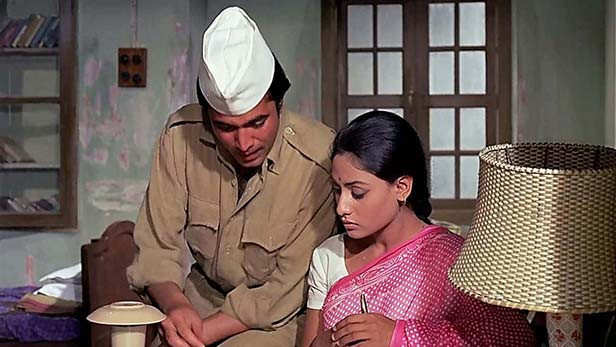 The film is said to be a remake of Bengali film Galpo Holeo Satti (1966) by Tapan Sinha. Sharma family, comprising Daduji (Harindranath Chattopadhyay), a strict disciplinarian, his sons Ramnath Sharma (AK Hangal) and Kashi (Kali Bannerjee), their respective wives Seeta Sharma (Durga Khote) and Shobha Sharma (Usha Kiran), another son Vishwanath Sharma (Asrani), and granddaughter Meeta (Manisha) and Krishna (Jaya Bhaduri). Servants tend to run away from their family every six months because the members are always quarrelling. They are in dire need of a cook and when Raghu (Rajesh Khanna) lands at their place one day, they hire him. Raghu soon starts noticing their quirks and starts placating them one by one, winning their trust in the process. Slowly, there’s harmony in the house and the brothers start interacting with each other. His eyes are forever glued to a trunk kept below Dadu’s bed. One day, after spaying the family with a sleep-inducing substance, he disappears. A young man known to the family appears with the contents of the trunk and explains he caught Raghu stealing it. Later, he confesses that he loves Krishna and Raghu hoped that they would find him a favourable match after his ‘rescue’ and put him up to it. The film was shot almost entirely in a house. Superstar Rajesh Khanna is shown dusting and cleaning the house and even cooking numerous dishes, some of them he reportedly cooked in reality. 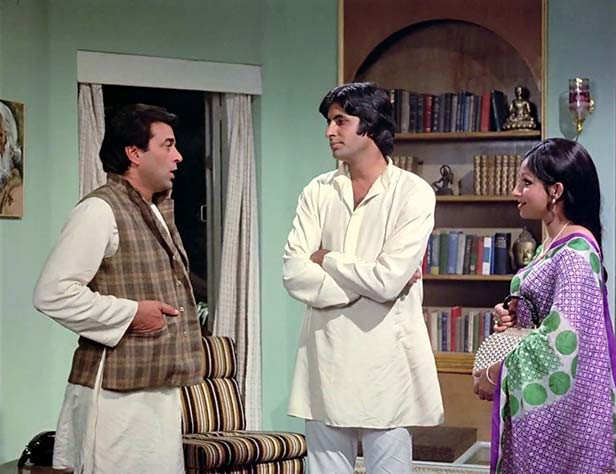 The film is set mostly in two houses — one where OM Prakash lives and another owned by Asrani. Some of the scenes were shot at producer N C Sippy’s bungalow at Juhu. Amitabh Bachchan later bought it and named it Jalsa. The film was a remake of the Bengali film Chhadmabeshi (1971), starring Uttam Kumar and Madhabi Mukherjee. The film centred around the prank played by Dr Parimal (Dharmendra), on his brother-in-law Raghav Sharma (Om Prakash). Parimal comes to Mumbai posing as a driver from Allahabad and is instantly hired. Sometimes later, Sulekha (Sharmila Tagore), too lands up at her sister’s place. The growing intimacy between the driver and the driver and Sulekha is frowned upon by all. Catastrophe strikes when they elope and Sukumar (Amitabh Bachchan) posing as Parimal, comes to Mumbai. He is made to stay in a mutual friend Prashant’s (Asrani) house and love blossoms between Sukumar and Prashant’s sister-in-law Vasudha (Jaya), leading to further confusion. Amitabh and Jaya were married by then and she was pregnant, but director Hrishikesh Mukherjee hid the fact from his viewers through clever usage of the camera.

When Manju (Rekha) comes to stay for some time with elder sister Anju (Aradhana) after the latter’s marriage, she’s bewildered to find that it resembles an army barrack more and an actual house, less. People speak only when necessary, don’t laugh at all, don’t seem to have any sort of hobbies and there are rules for everything. The house is run in clockwork precision by Anju’s mother-in-law Nirmala Gupta (Dina Pathak). Dwarka Prasad (Ashok Kumar), her husband, likes gardening, youngest Jagan (Ranjit Chowdhry) loves rock music, while the elder sons like to play cards. The middle son Inder (Rakesh Roshan) is studying to be a doctor and starts liking Manju. Everyone follows their hobbies but in secret. Manju brings a revolution of sorts in the house by making sure everyone enjoys themselves in Nirmala’s absence. The women start dancing in the evenings and even stage a musical play which is about breaking free of rules. Nirmala returns early and catches them at it, leading to everyone feeling guilty. It so happens that Dwarka Prasad has a heart attack and it’s Manju who saves his life by keeping a sane head at the time of calamity. The film was shot almost in entirety in the Pune household of the Guptas but such is its magic that we don’t really miss a change of scenery.

It’s based on Malayalam film Punjabi House (1998). Jeetu (Shahid Kapoor) the son of retired teacher Jaidev Prasad (Anupam Kher) owes money to several people and decides to commit suicide by throwing himself into the sea. However, it does not go as planned and Jeetu is saved by a pair of fishermen, Gundya (Paresh Rawal) and Bandya (Rajpal Yadav). Gundya owes money to a Gujarati businessman, Prabhat Singh Chauhan (Om Puri). He keeps Jeetu and Bandya with the businessman as collateral till he pays the loan. Jeetu pretends to be deaf and mute and that leads to several funny situations. Prabhat’s niece Shruti (Kareena Kapoor) is mute too, but not deaf. She finds out his secret and asks him to help her out. She’s to be married to someone against her wish and Jeetu pretends to be her lover, which makes the prospective groom break off the marriage. Shruti begins to like him in earnest and after several madcap moments, he’s finally accepted by all, including Mangal (Sunil Shetty), Shruti’s rather strict brother. They are all set to marry but at this juncture, his family learns he’s alive and demands he marries his fiancee, who has been living in his house as his widow. The film is set mostly in the rather large house owned by Om Puri, though it looked more like a film set than an actual house.

I Learned How to Do a Muscle-Up in Just 4 Weeks. Here’s How

The economic crisis will expose a decade’s worth of corporate fraud (The Economist) : Economics