From the first episode of Netflix’s The Umbrella Academy, I knew Allison Hargreeves would be my favorite superpowered sibling. She’s the perfect combination of effortlessly cool and hauntingly vulnerable. She has enormous power — being able to bend reality to her whim with a simple phrase — but the ease in which she abuses it scares her. Unlike her graphic novel counterpart, she’s compassionate and kindhearted, which makes her infinitely more likable. That dynamic shift is mostly thanks to Allison’s portrayal by Emmy Raver-Lampman, the actress who manages to make me love the flawed yet compelling Number Three.

The Allison I fell in love with in season one is notably different from the one we meet with in season two, a difference that Raver-Lampman credits to Allison’s adventures while reuniting with her siblings and the circumstances she finds herself in when they get separated after Number Five uses his powers to save his family from the Vanya-induced apocalypse in 2019.

“I think we are getting a glimpse of a new Allison in season two,” Raver-Lampman told POPSUGAR. “She has taken this low moment in her life — landing back in the ’60s without her family, without Claire, without her powers, and being immediately confronted with the segregated South — as an opportunity for a new beginning. And because she doesn’t have her voice for a year, she has been scaled all the way back and doesn’t have the vices and the crutches that she is used to and is accustomed to.”

Arguably the most socially adept of her siblings, Allison’s biggest vice is her power. When we meet Allison in season one, she’s recently divorced with her ex-husband gaining sole custody of their daughter Claire after he witnesses Allison using her power on her. It’s suggested that up until that point, using her power — or “rumoring,” as everyone calls it — has been Allison’s preferred method of getting what she wants in the world, including fame and her husband. It’s easy to view such flagrant use of her power as arrogance, but as the show teaches us more about the Hargreeves and their upbringing, it’s obvious that Allison’s desire for adoration comes from a place of deep insecurity and absence of affection from her family. And while Allison is easily the most well-adjusted of her siblings (which doesn’t mean much, considering), she’s still pretty dysfunctional.

“I think Allison definitely got off easier than some of the others, 100 percent,” Raver-Lampman admitted when asked how Sir Reginald’s callous rearing of the Umbrella Academy affected Allison in the long run. “She was kind of pushed out to the front as the poster child and seemingly the favorite. I mean, they’re all damaged and wounded from him, and there is definitely a trauma that she’s working through, especially during the end of the first season, but I don’t think she put as much weight into her relationship with him as Diego or Luther did.”

“The decision was made to cast a Black woman as Allison and so, if you’re taking the entire family back to the ’60s, there is no question that Allison would have to come head-to-head with the segregated South.”

It’s a small saving grace for Allison, but in the long run, it doesn’t stop the third most-useful Hargreeves from royally screwing up her own life. By the end of season one, she almost dies at the hand of her sister and loses her ability to speak, rendering her ability gone. When she joins her siblings in attempting to escape the end of the world in 2019, she’s a woman at the end of her rope, with nothing left for her outside of those six people. Her “escape” lands her in Dallas, TX, in the year 1960, mute and completely alone. As a Black woman in the segregated South, smack dab amid the civil rights movement, Allison’s usual method of simply speaking her desires into reality won’t work. It’s a decidedly different path than her graphic novel counterpoint’s journey in the second book.

“We set that precedent with the first season that the graphic novels are source material, but that is not Bible and we’re not following those to a T,” Raver-Lampman explained. “But the decision was made to cast a Black woman as Allison, and so if you’re taking the entire family back to the ’60s, there is no question that Allison would have to come head-to-head with the segregated South. That is something that is undeniable. And that is not something that is in the graphic novel, obviously, because the original depiction of Allison is white.” 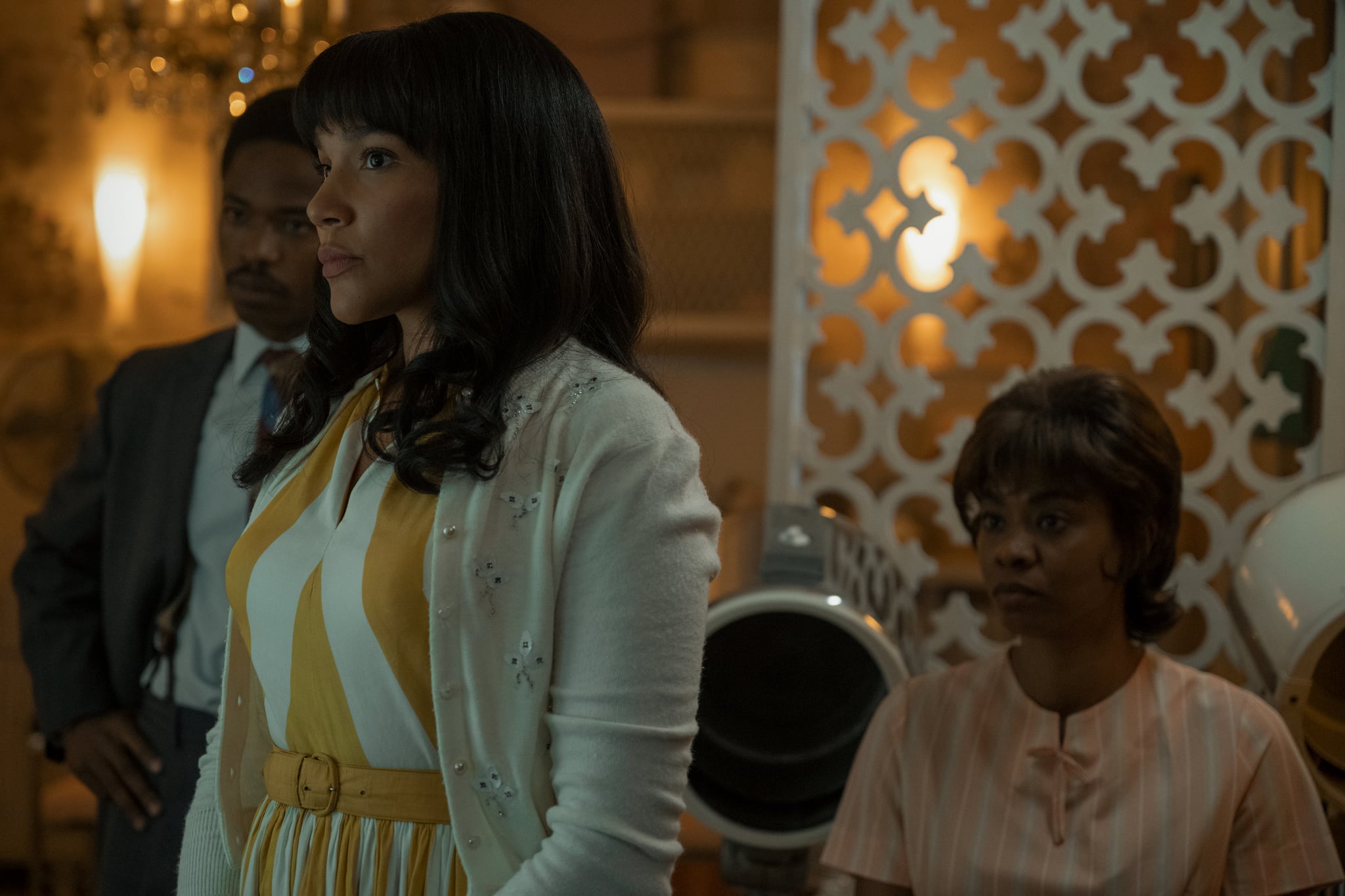 Raver-Lampman went on to say that she saw the storyline as an opportunity to shed light on an important narrative as the season tackles several pretty big topics that fans can relate to. “With the millions and millions of viewers that we have all over the world, there is something that they can all connect to in this season and the last season,” she added. “Everybody seems to be able to find something that they can attach to and connect themselves to in our show, and I think that has been made very apparent just from the fans that I have heard from and the conventions that we go to, and the press that we do.”

The Hamilton star was happy to take on the story on a personal level as well. “I’m thrilled to play a Black woman as a superhero lead on the show, and that has provided Netflix an opportunity to shed light on what it would have been like for a her to travel back to the segregated South in the ’60s,” she said. “It’s an undeniable storyline that had to be addressed. There’s no way around it. And I wouldn’t want to go around it if we could.”

“The energy was always palpable on set those days, because the stakes are really high, it’s emotional, and it’s uncomfortable, and it goes against what so many of us stand for and feel.”

Despite what many people want to believe, graphic novels and comic books go hand-in-hand with social movements. While The Umbrella Academy‘s dive into the civil rights movement isn’t a groundbreaking concept, it’s a startlingly significant one as the real world deals with a social movement against racial injustice and police brutality. It’s especially poignant to watch Allison physically struggle against police officers as other uniformed men beat her husband, Raymond, after a sit-in at a local diner. The lines between reality and fiction feel slightly blurred with the wounds of Breonna Taylor and George Floyd still fresh on our minds.

Although none of the events that sparked today’s ongoing protests had occurred when season two was filming, Raver-Lampman admitted that the energy on set could still get heavy with the gravitas of the story being performed. “I was nervous, but I was also really honored, and it became a priority to be as respectful as possible,” she said. “Every scene of Allison’s that deals with their organization, the sit-in, the riots, and even the landing scene with her walking into the diner and seeing the whites-only sign — it was really emotional. The energy was always palpable on set those days, because the stakes are really high, it’s emotional, and it’s uncomfortable, and it goes against what so many of us stand for and feel. But it is reality, and it is relevant. That point is driven home even more in this moment and the movement that we are in the middle of in the wake of George Floyd.”

She added, “It was really important to me that we do it right and take a proper stance on it. It was essential that Allison become a part of it — she doesn’t get caught up in it, she is an active participant in it, and this is how she decides to use her power. She uses her strengths and her voice in a different way.”

This is where the “new” Allison truly takes form; a more evolved version of character, who is compassionate but still wounded. In season two, Allison has come into her own as a sun-starved plant finally seeing the light, blossoming as she pieces together a life completely absent of her family and her fame. Her previous ways of cutting corners and rumoring her way to success no longer apply — she actively refuses to use her powers until she’s forced to. While her abilities have always done the job in a quick fix, the work to desegregate can’t be rumored into existence, and the civil rights movement had to be permanent. This isn’t just a mission for her until she can return to her own time; this is work to ensure that her future literally depends on.

“I feel like we’re looking at an Allison that’s seeing her reflection in the mirror, and she’s liking that person, maybe for the first time ever.”

“I think she’s taking life a little slower, listening more, being more observant, learning more, and growing,” Raver-Lampman mused. “She’s found a community that supports and loves her, has found a man that loves her for exactly who she is without all the stuff she thought she needed to be loved before she landed in Dallas. And I feel like we’re looking at an Allison that’s seeing her reflection in the mirror, and she’s liking that person, maybe for the first time ever. She’s starting to be proud of who she is becoming and what this change has brought forth in her. She’s finding this strength in herself that has nothing to do with her powers, and she’s enjoying it. More so than not, I think she’s felt like her powers are a curse rather than a blessing, and she’s realizing that she doesn’t need them to be powerful, she doesn’t need them to be heard.” 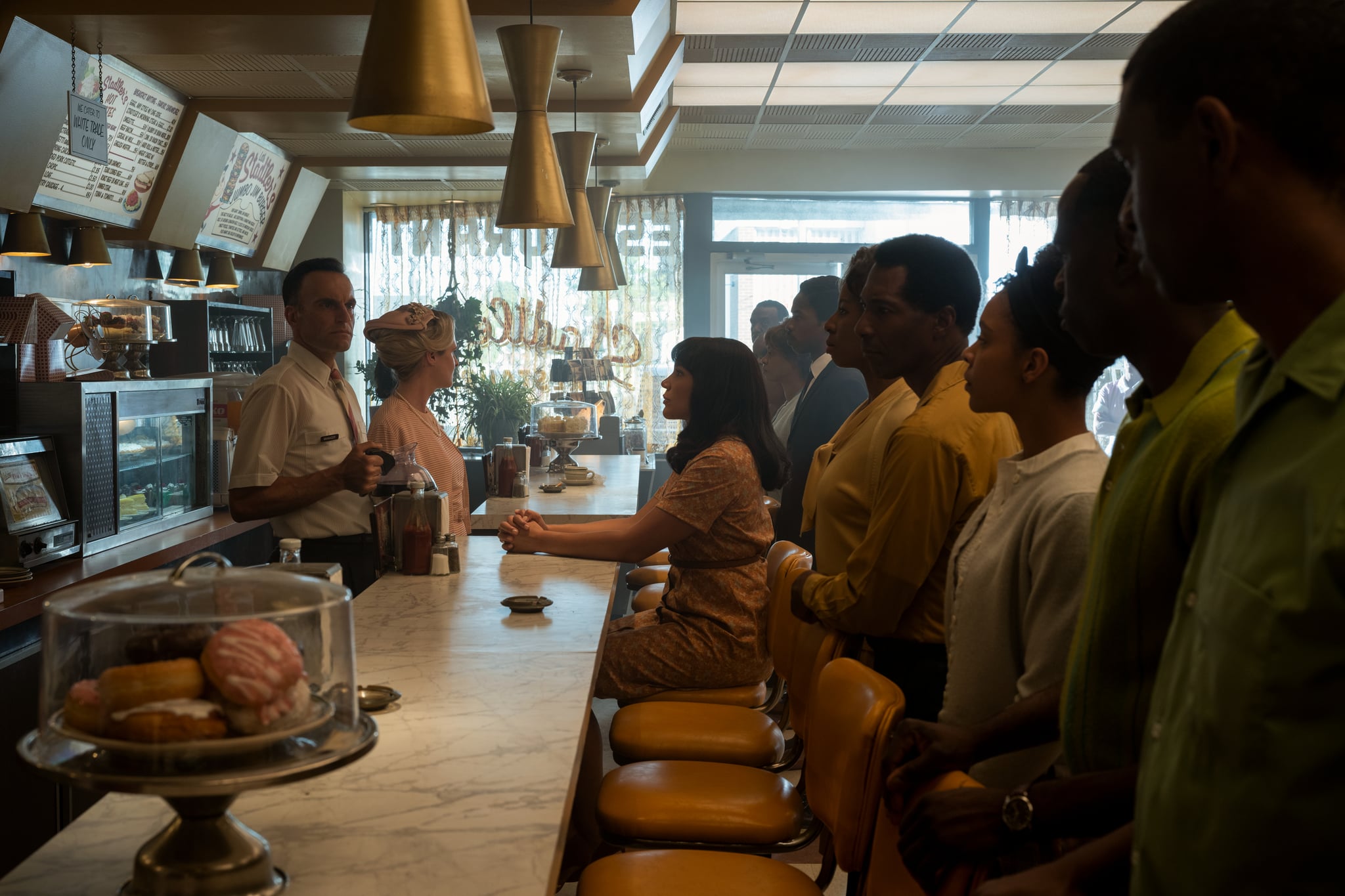 Well, we all love to see a woman come into her own, and Allison’s evolution means we’ll be seeing more of her being the badass leader she’s always been meant to be! That is if Netflix gives the series a third season, of course. If the Hargreeves were to get the green light for another round, one thing Raver-Lampman would love to address is Allison’s estranged daughter, Claire. “At the end it’s like, ‘OK, cool. Sir Reginald is alive, and so is Ben.’ I would say Allison’s first thought is like, ‘Well, if these two are alive, what’s the situation with Claire?'” she noted.

There’s also the whole situation with Allison and all the trauma she’s been living through and gotten accustomed to. “There’s violence that she was a part of and witnessing on a day-to-day basis during the civil rights movement that she would have to deal with that at some point,” the actress added. “I would be really interested in going down a mental health journey for Allison and how she’s dealing with it all since she had to survive that moment alone for so long. Sure, she found Ray, but that doesn’t mean it wasn’t awful. Those are two things I would really like to explore.”

Is Safe Sex Possible During Coronavirus? Doctors Weigh in.