Lebanese Health Minister Hassan Hamad says at least 25 people have been killed and more than 2,500 are wounded in a massive explosion at the port in Lebanon’s capital, Beirut.

The explosion released a shockwave causing widespread damage to buildings and shattering windows in different parts of the city.

The cause of the explosion was not immediately clear.

Here are the latest updates:

At the port Al Jazeera’s Timour Azhari spoke to Vincenco Orlandini, 69, a crew member of an Italian civilian ship, the Orient Queen, that was docked near the blast site.

He was covered in blood after the explosion threw him across a room of his ship, while several people on board were wounded and taken to hospital, Azhari said.

“I heard the blast and I flew to the opposite [side] of the lobby. I landed on the carpet and I’m lucky; I think that saved me. The ship is totally destroyed – the cabins, the lounge, everything,” Orlandini said.

A civil defense worker who has worked in the sector for 20 years was in disbelief at the scale of the damage.

“I’ve seen the assasinations and the explosions but this is something else. There is something wrong here,” he told Al Jazeera.

19:13 GMT – Israel: No reason not to believe Beirut blast was an accident

Israeli Foreign Minister Gabi Ashkenazi says the massive explosion in Beirut “was an accident caused by a
fire. I suggest caution with speculation – I do not see any reason not to believe the reports from Beirut”.

He made the comments to Israel’s Channel 12.

UK Prime Minister Boris Johnson says the UK is ready to provide any support it could to help Beirut.

“The pictures and videos from Beirut tonight are shocking,” Johnson wrote on Twitter. “All of my thoughts and prayers are with those caught up in this terrible incident.

“The UK is ready to provide support in any way we can, including to those British nationals affected.”

The pictures and videos from Beirut tonight are shocking. All of my thoughts and prayers are with those caught up in this terrible incident. The UK is ready to provide support in any way we can, including to those British nationals affected.

Lebanese Health Minister Hassan Hamad says more than 25 people have been killed and more than 2,500 are wounded.

“It is a disaster in every sense of the word,” Hamad said in an interview with several television channels while visiting a hospital in the Lebanese capital.

“Our thoughts and prayers are with the great and resilient people of Lebanon. As always, Iran is fully prepared to render assistance in any way necessary. Stay strong, Lebanon,” Zarif tweeted.

Our thoughts and prayers are with the great and resilient people of Lebanon.

As always, Iran is fully prepared to render assistance in any way necessary.

The Lebanese Red Cross says that more than 2,200 people have been injured and that the numbers are likely to rise, local broadcasters have reported.

18:34 GMT – Secretary General of Lebanese Kataeb Party among the dead

Among the dead is the Secretary General of the Lebanese Kataeb Party, the party has announced.

The headquarters of the Kataeb Party, one of the oldest parties in the country, is located right next to the port.

Local television quoted hospital sources as saying some 400 to 500 people have been wounded, and that all of the hospitals in the capital are overwhelmed as people are brought in.

18:20 GMT – Dozens of people being turned away from hospital

Dozens of people are trying to enter a hospital in Beirut and are being turned away, Al Jazeera’s Timour Azhari said.

“People are discussing about which hospital they can get to across the city. This hospital, the Hotel-Dieu hospital has formally announced that people should stop coming here.”

“There are corridors lined with wounded, bloody people,” Azhari said.

“There are people crying. The hospital itself has sustained damage; its ceiling looks very precarious, it looks like it’s going to fall apart.”

Lebanese President Michel Aoun has called for an emergency meeting of the country’s Supreme Defence Council, according to the presidency’s Twitter account.

Prime Minister Hassan Diab has called for a day of mourning on Wednesday.

The Lebanese Interior Minister has said that ammonium nitrate was stored in the port, which is what caused the explosion, local media reported.

He said Lebanese customs should be asked about why it was there.

The blast, which flattened much of the capital’s port, was felt across the city as a giant mushroom cloud rose above it. 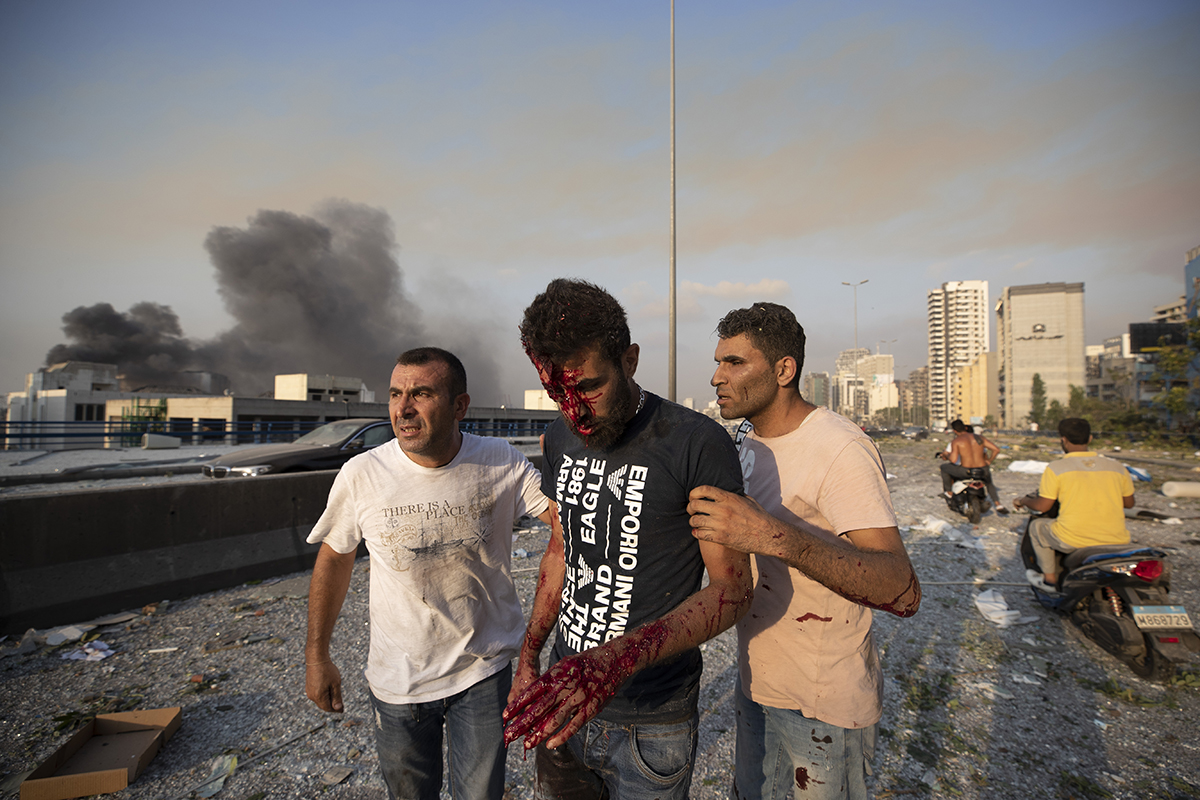 People help a man who was wounded in a massive explosion in Beirut. [Hassan Ammar/AP Photo]

Al Jazeera’s Timour Azhari reaching the Beirut port shortly after the explosion, said the site looks like a “wasteland” with debris seen everywhere.

“Cars [from the ground] were thrown three floors up onto roofs of factories here,” Azhari said.

“Rescue services have not been able to reach the actual site of the explosion yet because fires are still raging. Helicopters are circling the area trying to extinguish the fire.

“It really was an incredible explosion. People here are saying that they have never seen anything like it.
Even on the way here the roads were covered in glass,” Azhari said.

Al Jazeera’s Zeina Khodr reporting from Beirut said the head of General Security, General Abbas Ibrahim, visited the site of the explosion and said it appears the explosion was caused by highly explosive material that was stored in a warehouse.

According to Ibrahim, the explosive material was confiscated years ago.

“We are at the entrance of Beirut’s port, you can see behind me the chaos. Ambulances continue to arrive, continue to evacuate the casualties,” Khodr said.

“So far according to security sources, at least 10 people have been killed, but we are expecting that number to rise because we understand from the health minister as well as the Lebanese Red Cross that there has been hundreds of injuries.

“Ambulances have been called from across the country to help in the rescue effort. It was a massive explosion; you can see the fire trucks arriving at the scene trying to put out the flame.”

Israel has nothing to do with a huge explosion at the Beirut port area, an Israeli official has said.

“Israel has nothing to do with the incident,” the official said on condition of anonymity.

Israel’s Foreign Minister Gabi Ashkenazi told Israeli N12 television news that the explosion was most likely an accident caused by a fire.

At least 10 bodies have been taken to hospitals following the explosion in Beirut’s port area, a Lebanese security source and a medical source has told Reuters news agency.

Hundreds of people have been wounded in a huge explosion that ripped through Lebanon’s capital, Beirut, Hamad Hassan, the country’s health minister, told Al Jazeera.

Political Self-Determination and the Nagorno-Karabakh Conflict

How Small Acts of Defiance Turned Into...