Volunteers disinfect a mosque ahead of prayers during the Muslim holy month of Ramadan in Peshawar, Pakistan, on Friday. 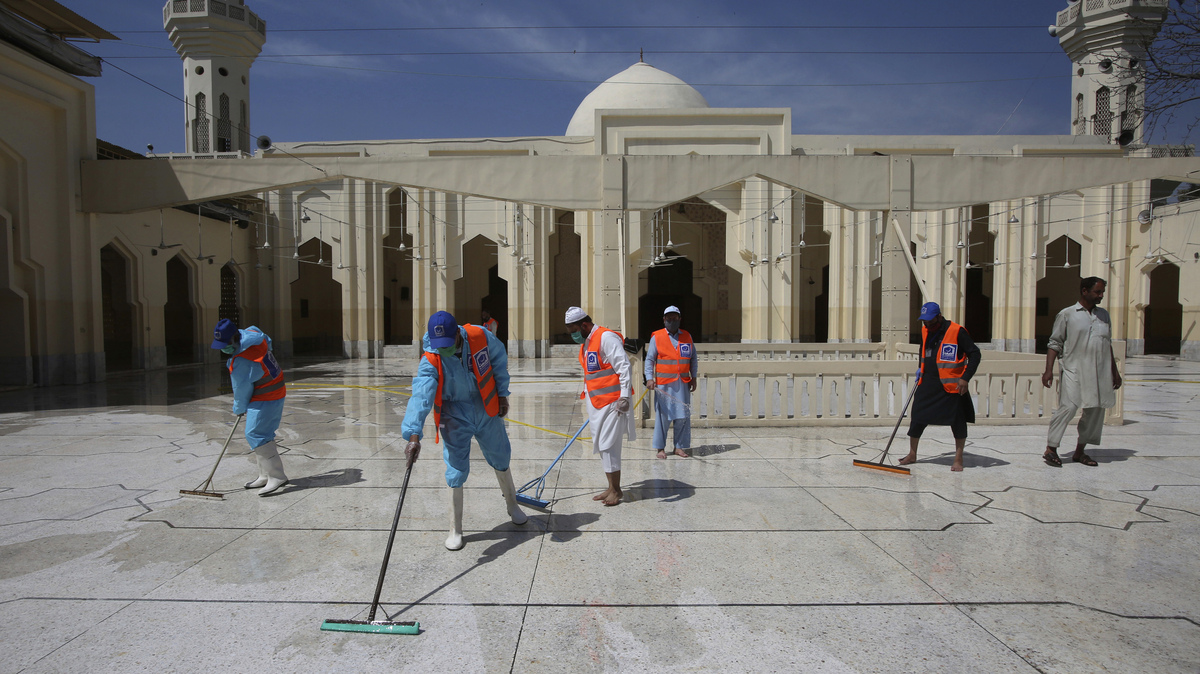 Volunteers disinfect a mosque ahead of prayers during the Muslim holy month of Ramadan in Peshawar, Pakistan, on Friday.

As the world’s 1.8 billion Muslims begin observing the holy month of Ramadan, traditionally a time of dawn-to-dusk fasting, festivities and communal prayer, an unprecedented global pandemic is changing the celebration this year in equally unprecedented ways.

Mosques usually brimming with the faithful during Ramadan are closed, including in Saudi Arabia, home to Mecca and Medina, the holiest cities in Islam. The kingdom has some 14,000 confirmed cases, with more than 120 deaths from COVID-19, according to a tally kept by Johns Hopkins University.

Ramadan, the month that Muslims believe God revealed the Quran to the Prophet Muhammad, officially begins at the first sighting of the waxing crescent after the new moon, leading to different countries declaring its start a day or two apart.

In Saudi Arabia, the start of the holy month began Friday. In Egypt, it began Thursday. And in Iran, Ramadan begins Saturday.

In a statement, Saudi King Salman bin Abdul-Aziz Al Saud lamented the necessity to maintain social distancing to halt the spread of the novel coronavirus and the damper it would place on this year’s celebrations. 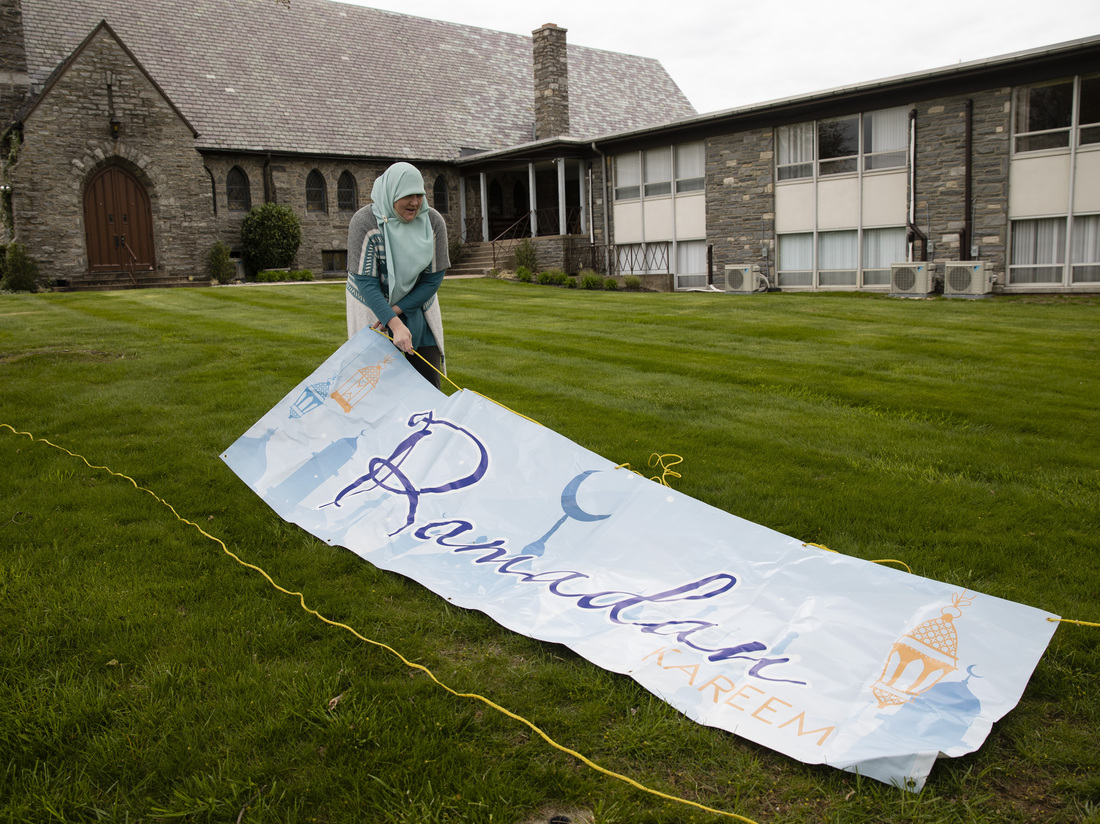 In Willow Grove, Pa., Teresa Hadjali prepares to hang a banner for Ramadan outside the Islamic Cultural Center of Willow Grove, which will remain closed because of social distancing guidelines during the coronavirus outbreak. 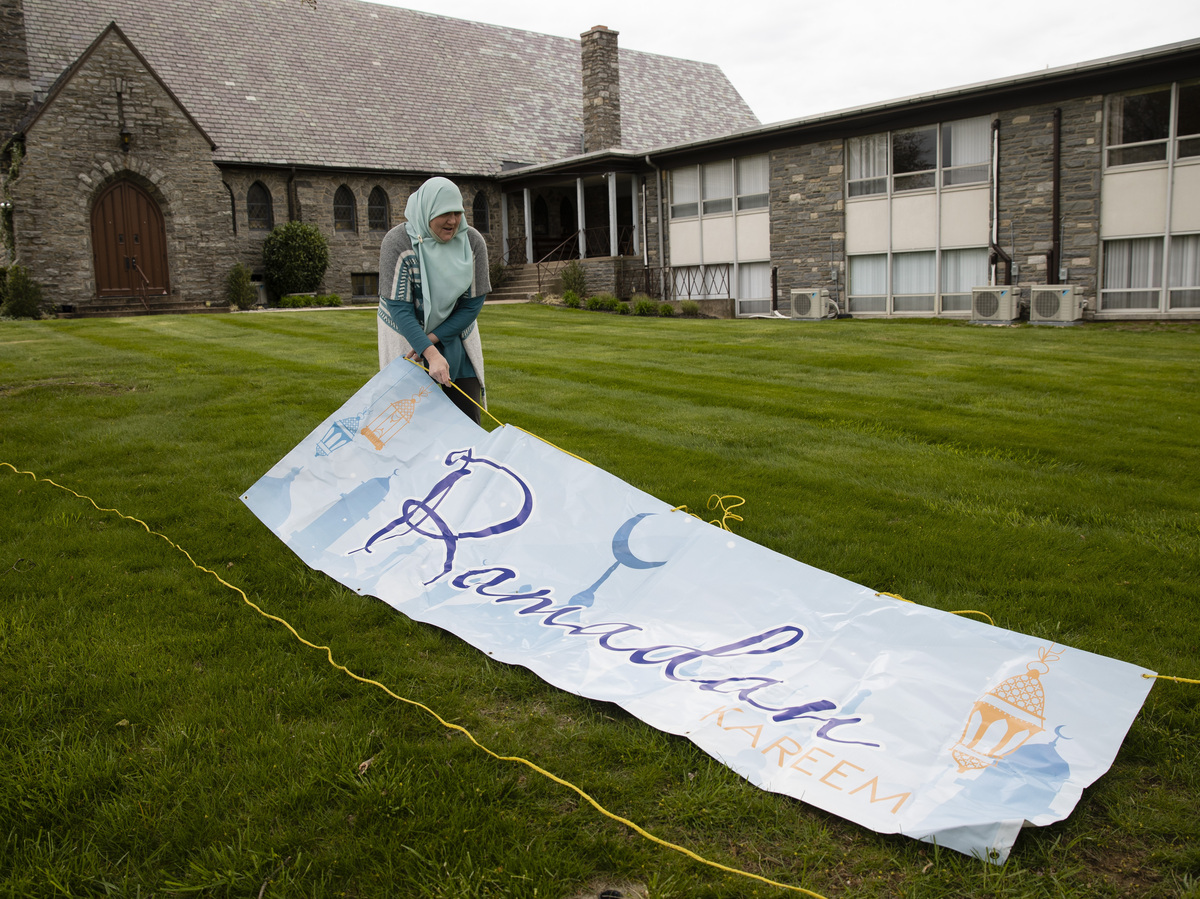 In Willow Grove, Pa., Teresa Hadjali prepares to hang a banner for Ramadan outside the Islamic Cultural Center of Willow Grove, which will remain closed because of social distancing guidelines during the coronavirus outbreak.

“It pains me to welcome the glorious month of Ramadan under circumstances that forbid us of prayers in Mosques and of performing the Ramadan prayers,” he said, according to the official Saudi Press Agency. “All this is due to the protective measures taken to save lives and human well-being in light of the global threat of COVID-19.”

In Iran, the Muslim country hardest hit by the pandemic, more than 87,000 cases have been confirmed with nearly 5,500 deaths, although the figures are believed to be significantly understated.

For weeks, Iran downplayed the epidemic within its borders, even as the country’s deputy health minister, Iraj Harirchi, was seen mopping his brow and in apparent distress on television shortly before being diagnosed with COVID-19, the disease caused by the novel coronavirus.

Officials in Iran have shown a reluctance to clamp down on Ramadan gatherings, even though the country’s supreme leader, Ayatollah Ali Khamenei, had hinted earlier this month that such measures may be needed.

In Pakistan, with more than 11,000 cases confirmed, authorities have rescinded an order to limit mosque gatherings under pressure from Muslim clerics.

Prime Minister Imran Khan, asked by reporters why his government was lifting the restriction, said: “We knew that people will definitely go to the mosques even after the government stops them by force. We did not want to send police to the mosques to impose a ban on congregational prayers and for arrests.”

In neighboring India, a predominantly Hindu country with an estimated 182 million Muslims, celebrations in cities such as Pune will be curtailed by the epidemic.

Mosques will remain closed and I request people to offer prayers at their homes. I would like to appeal everyone to follow lockdown & maintain social distancing: Syed Mohammad Ahmad Kazmi, Muslim Cleric in Dehradun, Uttarakhand #COVID19 pic.twitter.com/aPJGuV0gnO

“Every year there is a congregation of people praying at the mosque, there is a special namaaz (taravik), for the whole month, where people pray together; but, because of the lockdown, people will have to pray in their houses with the family,” Irshad Mulla was quoted as saying by The Hindustan Times.

“Earlier, we used to have all kinds of fruits, snacks, milk and dates which are important to break the fast, but this year the availability of these items may not be easy,” he said.

In Indonesia, with the world’s largest Muslim population, mainstream Islamic organizations have issued religious pronouncements asking Muslims not to hold mass prayers or to have communal dinners known as iftar to end daily fasts at sunset. In and around the capital, Jakarta, the government has kept people in lockdown during the outbreak, which has infected, by official count, nearly 7,800 nationwide and killed some 650.

An editorial in The Jakarta Post, an English-language daily, praised the restrictions, warning that the country is “not out of the pandemic woods yet.” 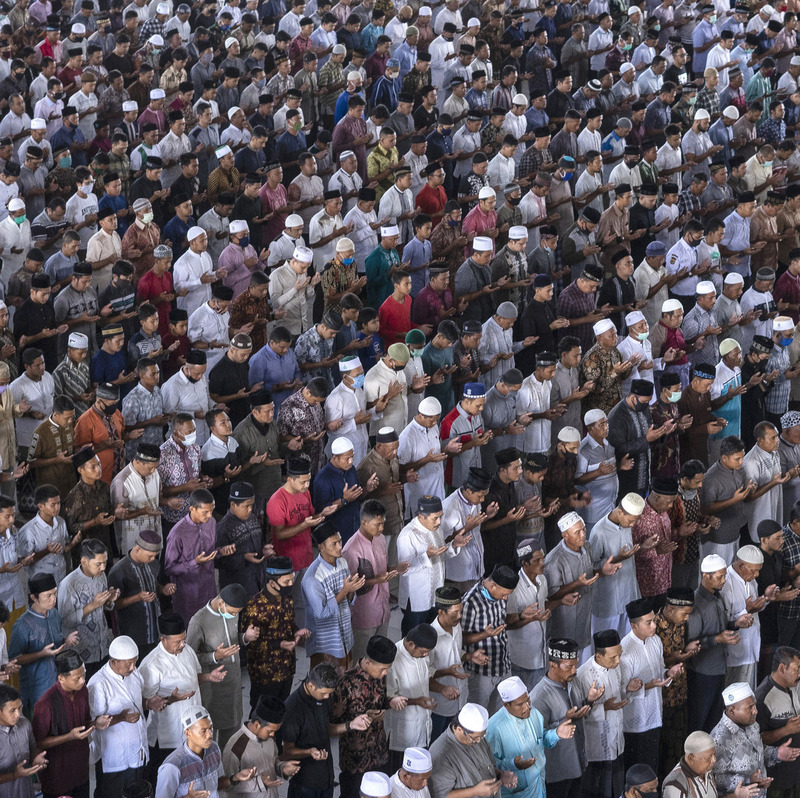 Muslim men attend a Friday prayer despite concerns of the new coronavirus outbreak, at a mosque during the first day of the holy month of Ramadan in Lhokseumawe, in the religiously conservative province of Aceh, Indonesia, on Friday. 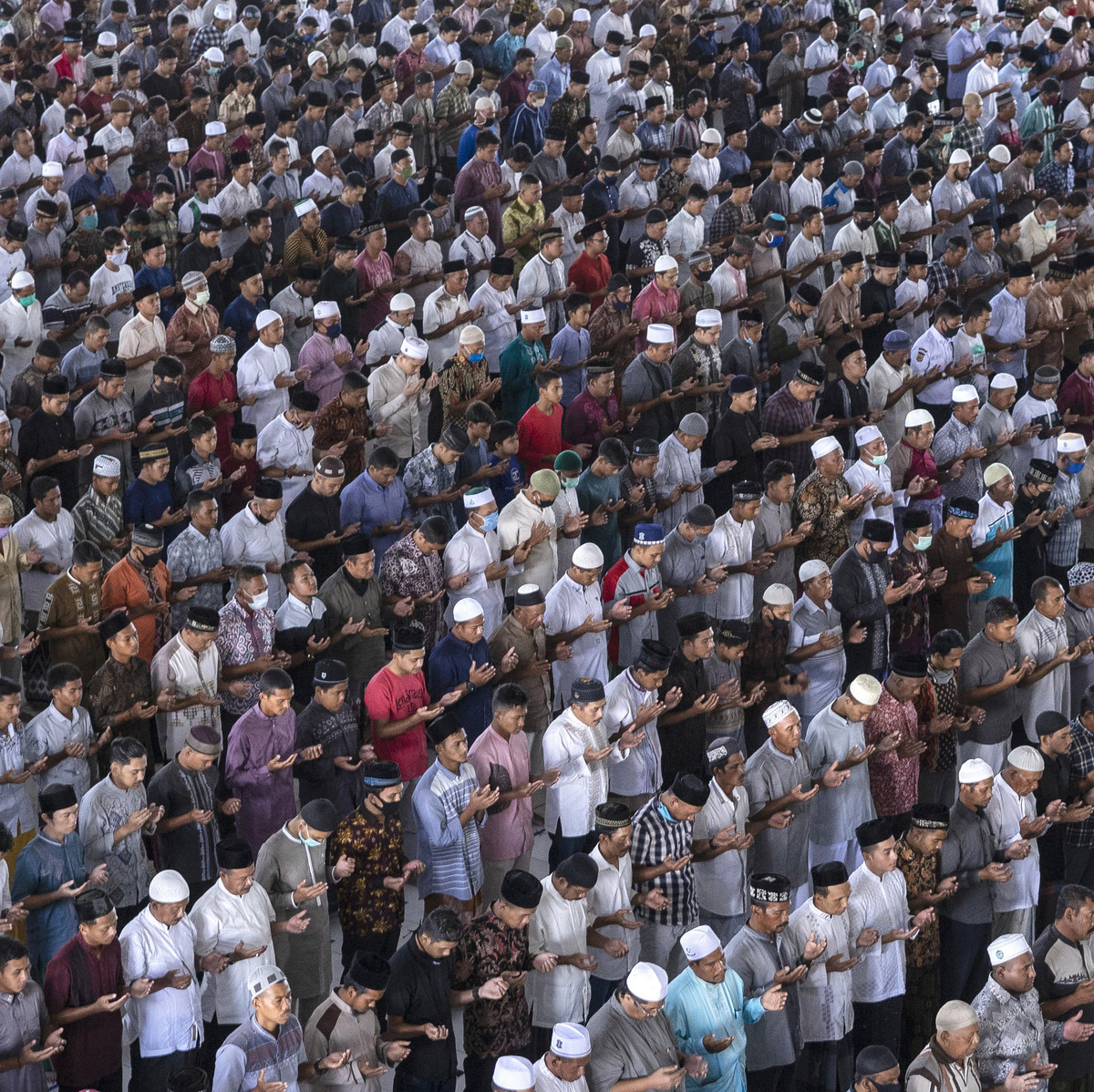 Muslim men attend a Friday prayer despite concerns of the new coronavirus outbreak, at a mosque during the first day of the holy month of Ramadan in Lhokseumawe, in the religiously conservative province of Aceh, Indonesia, on Friday.

“The government has made the right call to impose a partial lockdown on Greater Jakarta and ban residents from leaving the area to celebrate Idul Fitri [Eid al-Fitr] in their hometowns; yet, as of now, there is no indication the coronavirus outbreak has peaked in the country,” it said.

In the United Kingdom, which is home to more than 2.6 million Islamic faithful, the Muslim Council of Britain advised people to host and attend virtual iftars and to tune in to livestreams broadcast by their local mosques.

The lockdowns have also been difficult for Muslims in the United States, where many are opting for videoconferencing to replace in-person meals and prayers.

“The best part of iftars are the smells. Hugging and sharing that Ramadan joy, seeing all my family and the community,” she said. “I’m going to miss that. We’re having to readjust it all.”

17 New Technology Inventions You Must Have | Gadgets Under 500 Rupees to Rs1000, Rs5K and Lakh