The U.S. hit a tragic milestone Tuesday, recording more than 200,000 coronavirus deaths. Here, Chris Duncan, whose 75-year-old mother, Constance, died from COVID-19 on her birthday, visits a COVID Memorial Project installation of 20,000 U.S. flags on the National Mall. The flags are on the grounds of the Washington Monument, facing the White House. 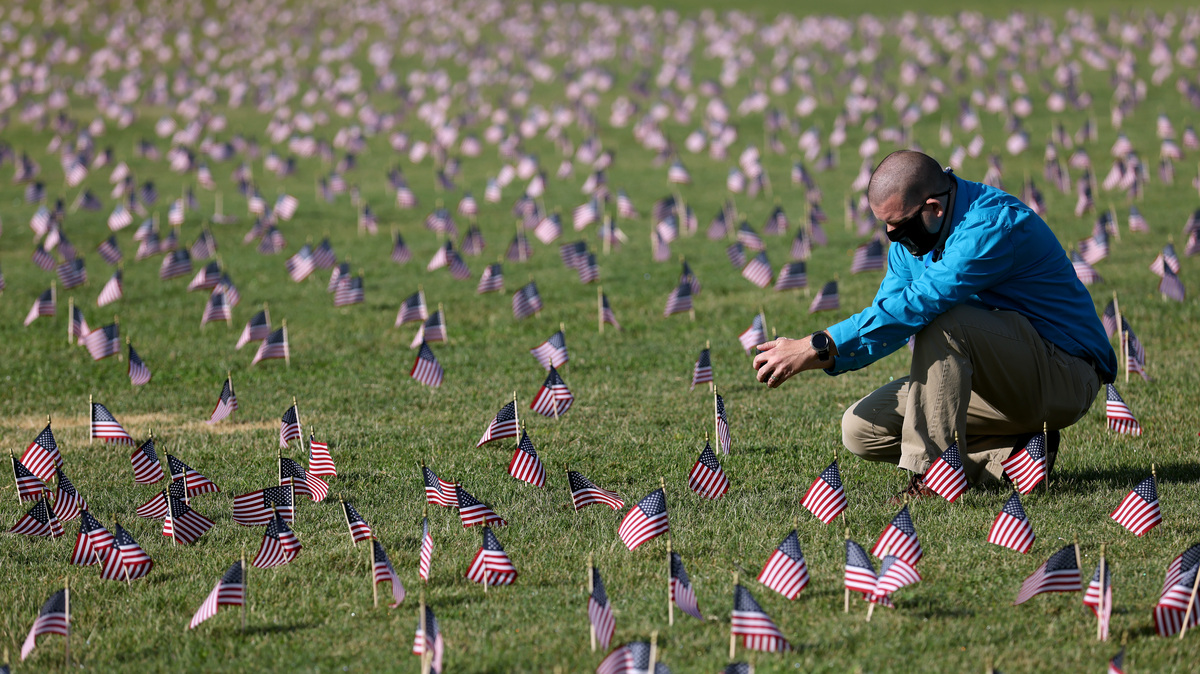 The U.S. hit a tragic milestone Tuesday, recording more than 200,000 coronavirus deaths. Here, Chris Duncan, whose 75-year-old mother, Constance, died from COVID-19 on her birthday, visits a COVID Memorial Project installation of 20,000 U.S. flags on the National Mall. The flags are on the grounds of the Washington Monument, facing the White House.

The U.S. death toll from COVID-19 surpassed 200,000 on Tuesday — reaching what was once the upper limit of some estimates for the pandemic’s impact on Americans. Some experts now warn that the toll could nearly double again by the end of 2020.

“I hoped we would be in a better place by now,” said Caitlin Rivers, an epidemiologist at the Johns Hopkins Center for Health Security. “It’s an enormous and tragic loss of life.”

COVID-19 is now one of the leading causes of death in the U.S., which has reported more than 6.8 million coronavirus cases – more than any other country, according to data collected by Johns Hopkins University. More than 31 million cases have been reported worldwide, including more than 965,000 deaths.

Potential vaccines are currently being tested, but even if a successful candidate emerges, it would likely take months or even years for it to become widely available.

Many of the U.S. COVID-19 deaths likely would have been prevented by widespread use of face masks, social distancing and other measures, said Bob Bednarczyk, assistant professor of global health and epidemiology at Emory University in Atlanta.

“Seeing this number of COVID-19-related deaths is concerning because it shows we really have not done enough to control this pandemic, and we are experiencing a tremendous amount of unnecessary suffering,” Bednarczyk said.

The disease was only given a formal name in February; one month later, COVID-19 was declared a pandemic — the first caused by a coronavirus. Since then, it has ravaged families and communities and wrecked economic dreams in the U.S. and around the world.

Rivers said that if mortality trends continue, “​COVID-19 will likely be the third-leading cause of death, after heart disease and cancer” in the United States.

“For comparison, by the end of the year we will likely have seen more deaths from COVID-19 than we saw from diabetes, influenza and pneumonia, kidney disease and suicide combined in 2017,” she said.

The disease already exceeds the number of U.S. deaths from accidents and unintentional injuries, Bednarczyk said. 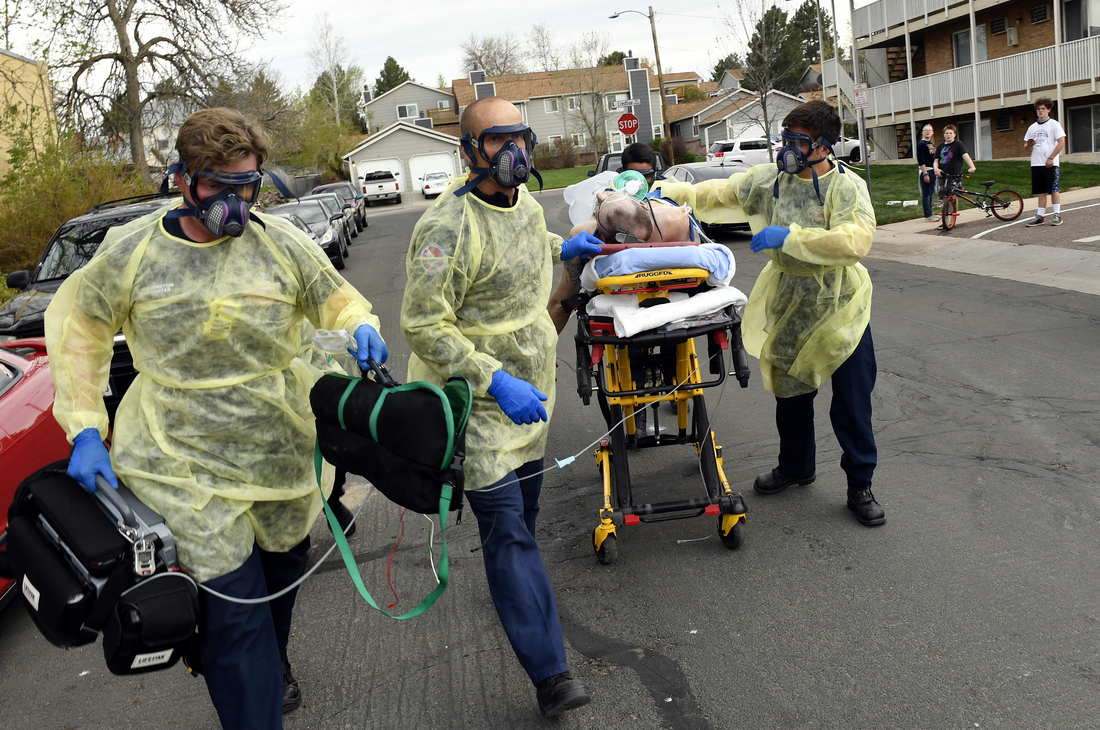 Firefighters in Littleton, Colo., move a patient on a gurney to an ambulance to take him to the hospital in May.

The U.S. death toll is the highest in the world, by a large measure. Despite having less than 5% of the global population, the U.S. has suffered more than 20% of COVID-19 deaths worldwide.

In late March, Dr. Anthony Fauci, America’s leading expert on infectious diseases, estimated that around 100,000 to 200,000 people in the U.S. might die as a result of the virus. Then, in early April, he predicted the toll could be far lower: 60,000 people.

Fauci cautioned that his more optimistic estimate was based on the American public adhering to physical separation and other restrictions in March and April — measures that, for a while at least, sharply reduced U.S. death toll projections.

But weeks after Fauci spoke, Georgia, Texas and some other states began relaxing their control measures.

“In late May, we were seeing around 1,000 to 1,400 deaths per day, but cases and deaths were declining and I was hopeful that things would continue to improve,” Rivers said. “It’s now September, and around 1,000 people are still dying in the U.S. every day, and that’s been stable for weeks now.”

The latest widely cited fatality projection for the U.S. indicates nearly 380,000 people will die from COVID-19 by the end of this year. The estimate comes from the Institute for Health Metrics and Evaluation, or IHME, a research center at the University of Washington.

While that projection is staggering — the loss of life could reach more than 445,000 by the end of 2020 if health and safety mandates are relaxed, the IHME said. Conversely, the estimate drops to fewer than 265,000 deaths if the use of face masks becomes universal in the United States.

“The U.S. population is getting numb to these numbers”

Huge figures such as those, Bednarczyk said, could contribute to another worrying phenomenon: pandemic fatigue.

“I am concerned that, by and large, the U.S. population is getting numb to these numbers,” Bednarczyk said, “and grim milestones such as 200,000 deaths or nearly 7,000,000 confirmed cases will probably not get people’s attention to spur more personal control measures.”

Many of the first 100,000 people to die of COVID-19 in the U.S. were living in urban areas — densely populated places that are also transportation hubs. But the additional 100,000 deaths reflect a shift away from cities.

“It’s easier for a virus to get into those locations and spread quickly,” Bednarczyk said of cities. “However, as we continue through the summer and early fall, we are seeing a shift in cases to areas that were much less impacted in the spring. These rural settings have seen much higher spread of disease in the last two months, showing that nowhere is safe from the spread of this virus.” 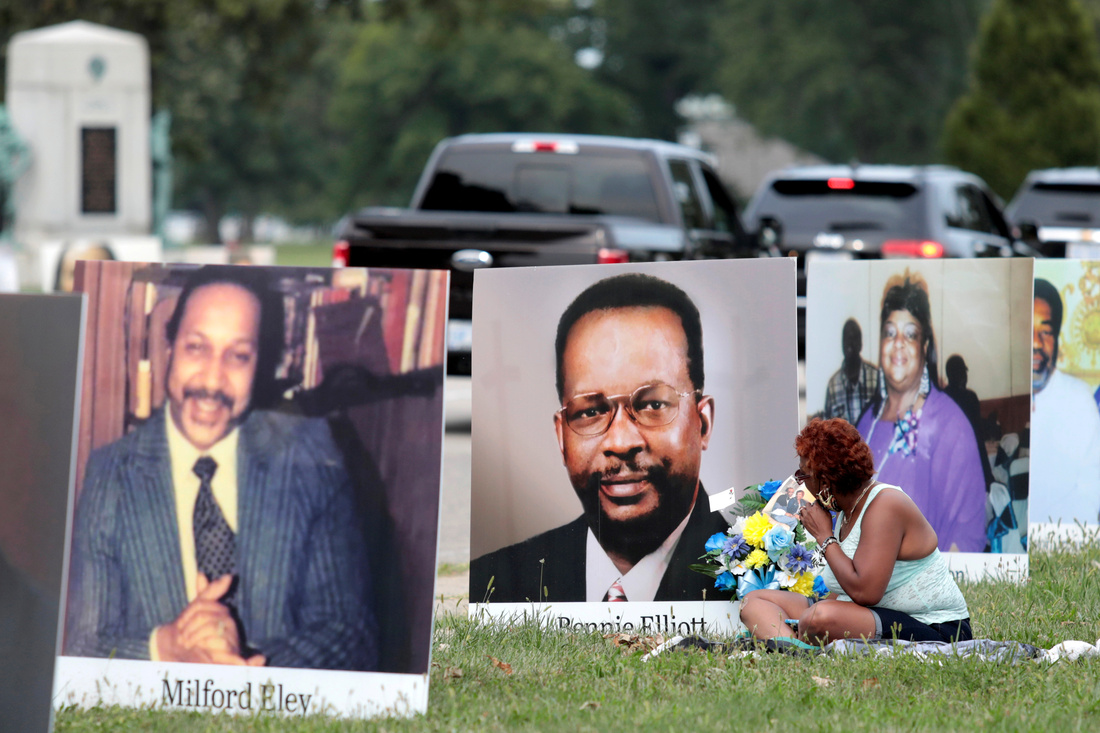 Images of Detroit-area residents who died from COVID-19 line a street during a drive-through memorial on Sept. 1 on Belle Isle in Detroit. The number of U.S. dead has crossed the 200,000 mark — and the figure could nearly double by the end of the year, experts say. 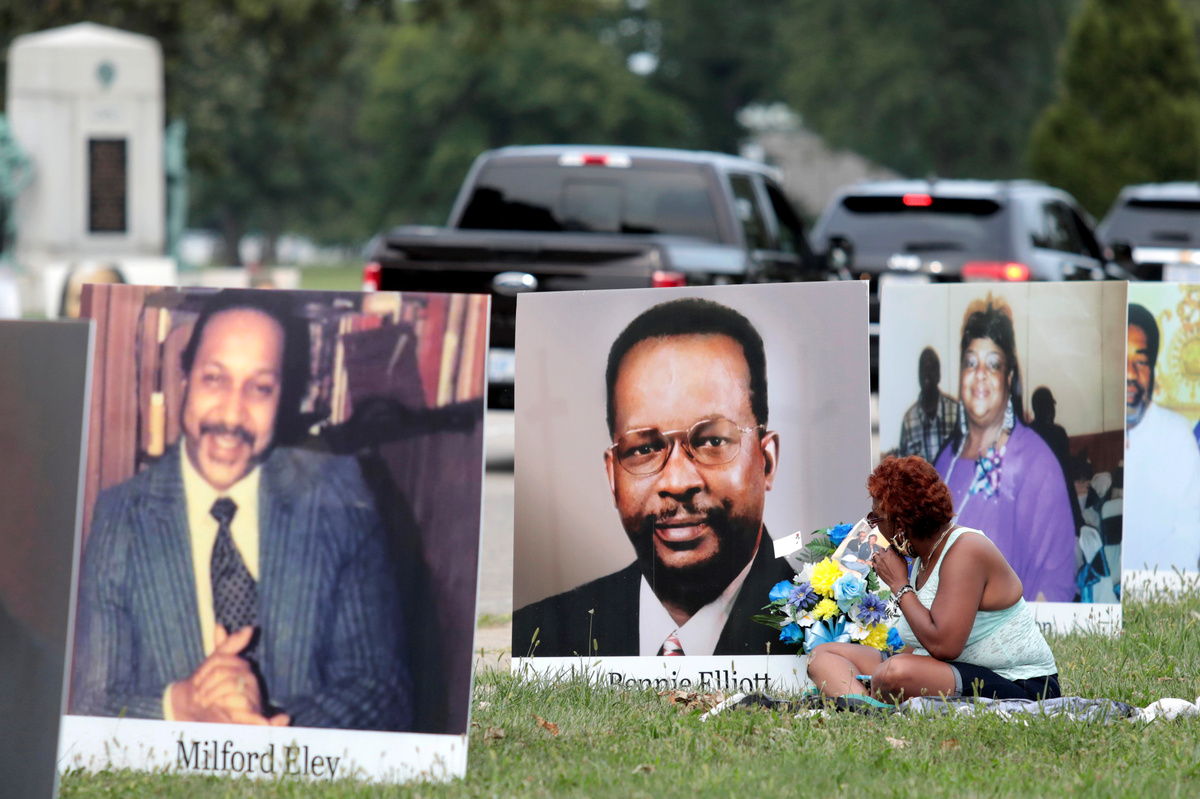 Images of Detroit-area residents who died from COVID-19 line a street during a drive-through memorial on Sept. 1 on Belle Isle in Detroit. The number of U.S. dead has crossed the 200,000 mark — and the figure could nearly double by the end of the year, experts say.

“We’ve seen hot spots move throughout the country,” Rivers said. “In the spring, Northeastern states were particularly hard hit. Then through the summer, it was states in the South and Southwest, and now we see disease spreading rapidly in the Midwest.”

As people grieve over friends and loved ones lost to the pandemic, they’ve also been forced to cope with other life-upending changes, such as losing their jobs or having to turn their homes into virtual classrooms.

Many schools and colleges are trying to find ways to reopen safely for in-person classes. As they welcome back students, some are also starting large-scale sporting events, such as college football.

“People are trying to find ways to live more normally during what has been a very long and difficult year,” Rivers said.

“In places where there is a lot of virus circulating, it won’t be safe to hold gatherings in person without mitigation measures,” she added. “But by controlling the virus, and by doing things like wearing masks, moving events outside and observing social distancing, we can gain more flexibility to do things that are important to us.”

Attempts to return to normalcy present a tricky situation, Bednarczyk said, noting the potential for large gatherings to become “superspreader” events that can cause dangerous secondary infections.

“The need for education is strong, but we won’t know the impact of these in-person classes for a while, and by that time, it is possible that the virus will have greatly expanded its spread,” he said. “My concern with things like college football games is as much for the players and coaches and staff who have to travel as it is for fans who may still gather to watch the games.”

For six horrible weeks, from late April into May, more than 10,000 Americans a week died from COVID-19, including 17,055 deaths in the week that ended April 18, according to the Centers for Disease Control and Prevention. The weekly death toll has fluctuated since then.

“For deaths, we still see that older adults and people with underlying health conditions are at highest risk of severe illness and death,” Rivers said. 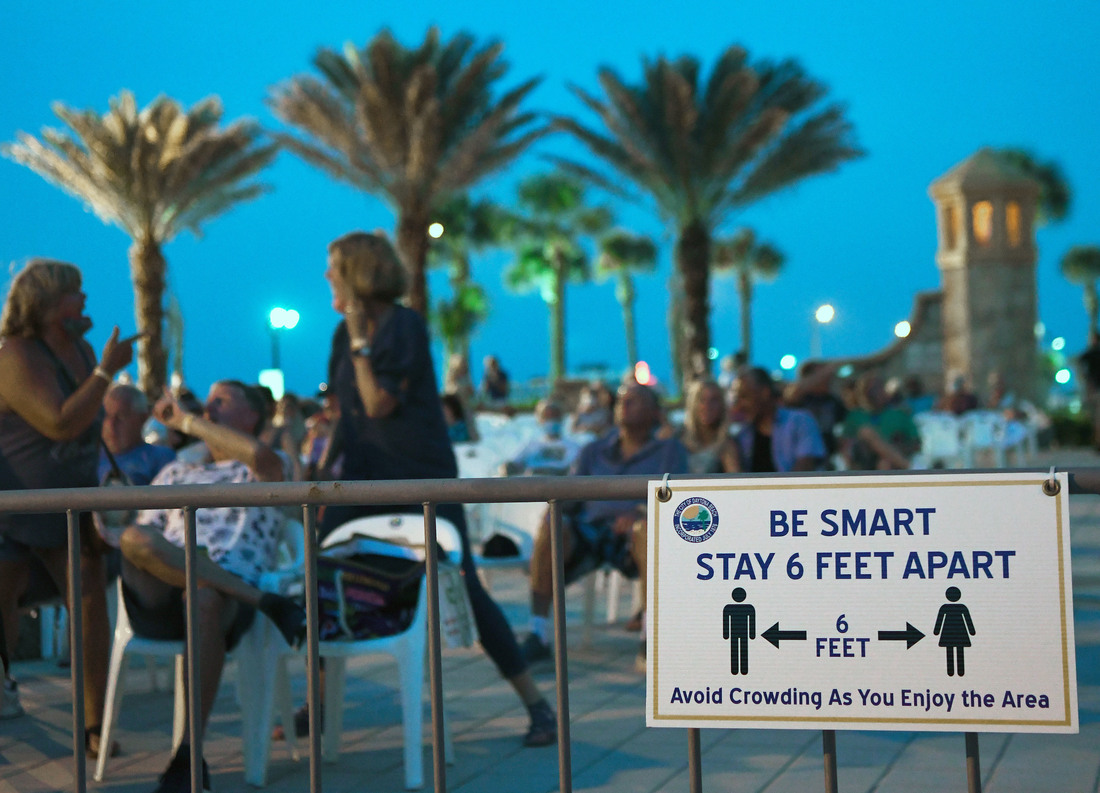 People attend a free concert at the Daytona Beach Bandshell on Labor Day weekend in Daytona Beach, Fla. For months, public health officials around the country have asked people to practice social distancing to slow the spread of the virus.

From the earliest phase of the disease’s arrival in the United States, COVID-19 has taken a horrible toll on minority communities, where people have died in disproportionate numbers compared with the general population.

According to the CDC, Black people in the U.S. have a coronavirus death rate that’s 2.1 times higher than white people. Latinos and Native Americans also have higher death rates.

Six months into the pandemic, majorities of Black, Latino and Native American households are facing serious financial problems, compared with 36% of white households, according to a recent national poll by NPR, the Robert Wood Johnson Foundation and the Harvard T.H. Chan School of Public Health.

Five U.S. states — New York, New Jersey, California, Texas and Florida — have reported more than 10,000 deaths each from the coronavirus. Globally, only 15 countries besides the U.S. have surpassed that tragic mark.

In terms of national population, the U.S. has seen more than 60 deaths per 100,000 people – slightly higher than the death rate in Mexico and lower than in Spain, Brazil, Chile, Bolivia and Peru, according to a mortality analysis by Johns Hopkins University’s Coronavirus Resource Center.

While the U.S. has the highest number of reported coronavirus cases, India has been reporting new cases at an alarming rate. That country — which has a much larger population than the U.S. — has reported more than 50,000 new cases daily since late July, according to data compiled by Johns Hopkins. The U.S. has seen its daily rate of new coronavirus cases fall below 50,000 since early August; since then, it has wavered around the 40,000 mark. 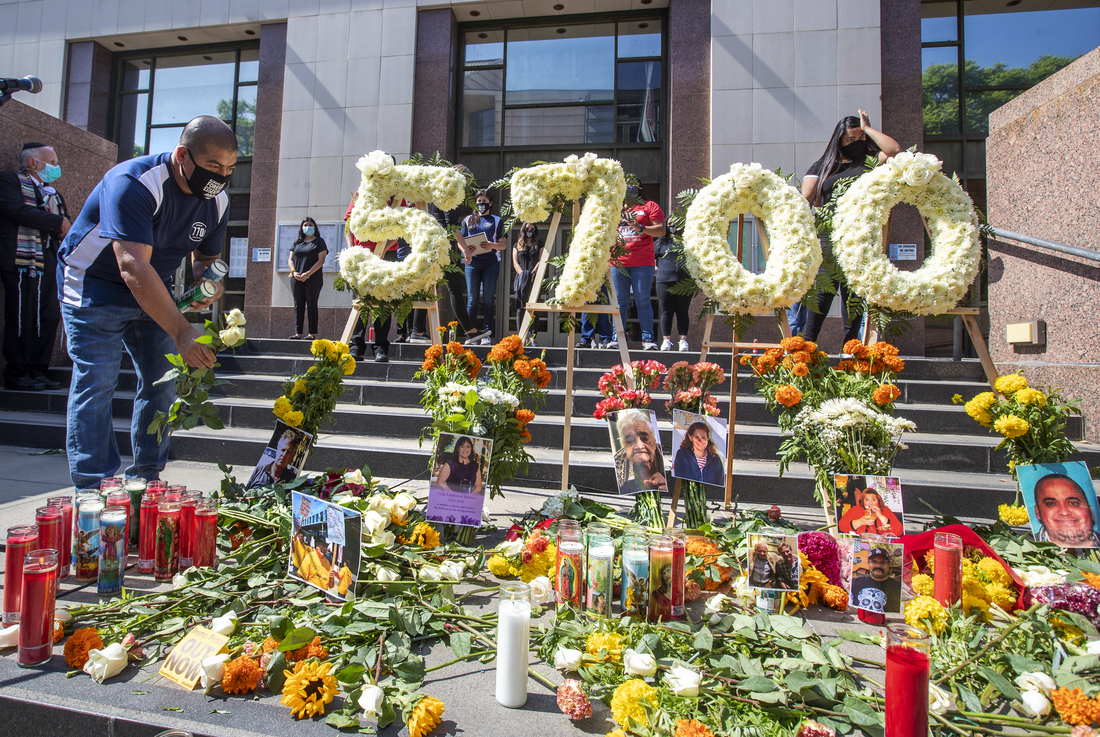 A man places a white rose on the ground last month at a memorial in downtown Los Angeles to honor the Angelenos who lost their lives due to the coronavirus.

More can be done to reduce death toll, experts say

Both Rivers and Bednarczyk say the U.S. still has a chance to reduce the pandemic’s tragic toll.

“The U.S. response has been chaotic, but there is always time to chart a better course,” Rivers said. “I would like to see the U.S. continue to scale up diagnostic testing and case-based interventions like contact tracing.”

Another positive step, she said, would be to use data collected from coronavirus case investigations “to identify high-risk settings and activities, so we can focus on those specifically.”

Noting the lack of strong and consistent control measures in the country, Bednarczyk said, “It is still possible to prevent a much larger number of deaths if people consistently wore masks and practiced good physical distancing.”

But he added, “I worry we’ll see more gatherings without masks, which will keep allowing this virus to spread.”