Brazil Is on Fire. But Ricardo Salles Is Cutting Protections


Letícia Larcher has had a tough year. As technical coordinator at a conservation institute in western Brazil’s vast Pantanal wetlands, Larcher has spent 2020 dealing with a record spate of wildfires which have destroyed a staggering 22% of the Pantanal—an area about 12 times the size of Rhode Island packed with rare wildlife including jaguars and macaws. She’s also watched another devastating fire season tear through Brazil’s share of the Amazon rainforest, the worst in a decade.

And to cap it all, on Monday, Brazilian environment minister Ricardo Salles added another of the country’s unique landscapes to Larcher’s list of concern. Salles announced an end to two legal protections for mangroves and coastal restinga forests, arguing the protections were “excessively restrictive” and “stifled economic development.”

Read More: Why Is the Amazon Rainforest Disappearing

His decision was quickly suspended by a federal court, after a lawsuit was filed arguing it violates Brazilians’ constitutional right to an ecologically balanced environment. Still, the move opened a new battle ground in one of the most bitterly-fought wars raging in Brazil under far-right President Jair Bolsonaro.

“It’s very frustrating,” Larcher says, noting that she studied mangroves and restinga forests for her doctorate before joining conservation efforts in the Pantanal. Both consist of shrubby, hardy plants that scientists consider vital to protecting land from coastal erosion, sheltering biodiversity and sequestering carbon from the atmosphere to slow the greenhouse effect. ”Salles is the environment minister: his role is to take decisions for the environment, not for other groups.”

It’s not exactly unexpected from Salles, who is nicknamed ‘The Terminator’ among Brazilian climate activists. Appointed by Bolsonaro in December 2018, the 45-year-old has led a decisive campaign to overhaul Brazil’s environmental institutions and relax regulations.

A volunteer works to douse a fire on Transpantaneira, the road that crosses the Pantanal, near Pocone in the Brazilian state of Mato Grosso on Sept. 11. 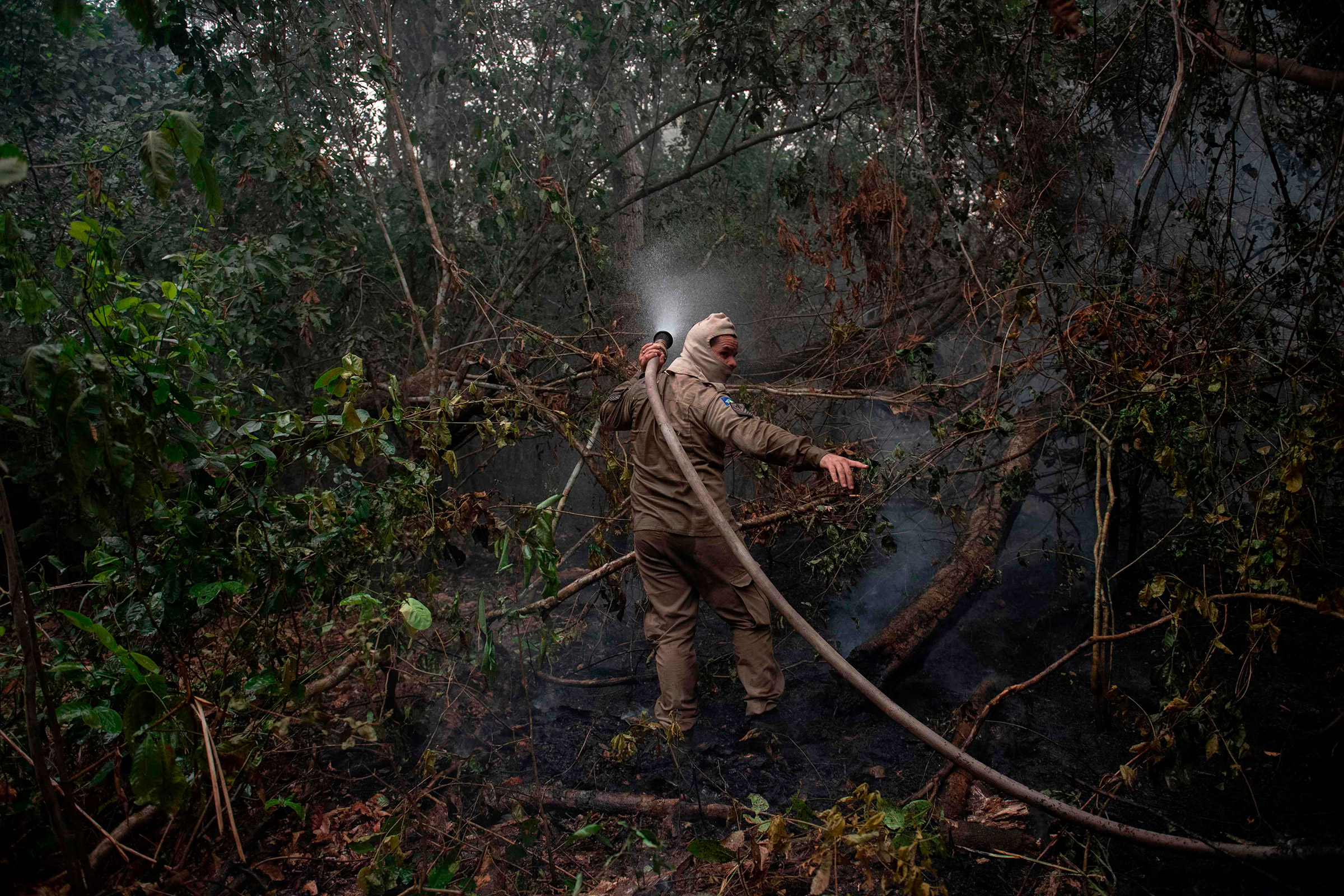 Firefighters work to put out a wildfire in the Porto Jofre region on Sept. 14. 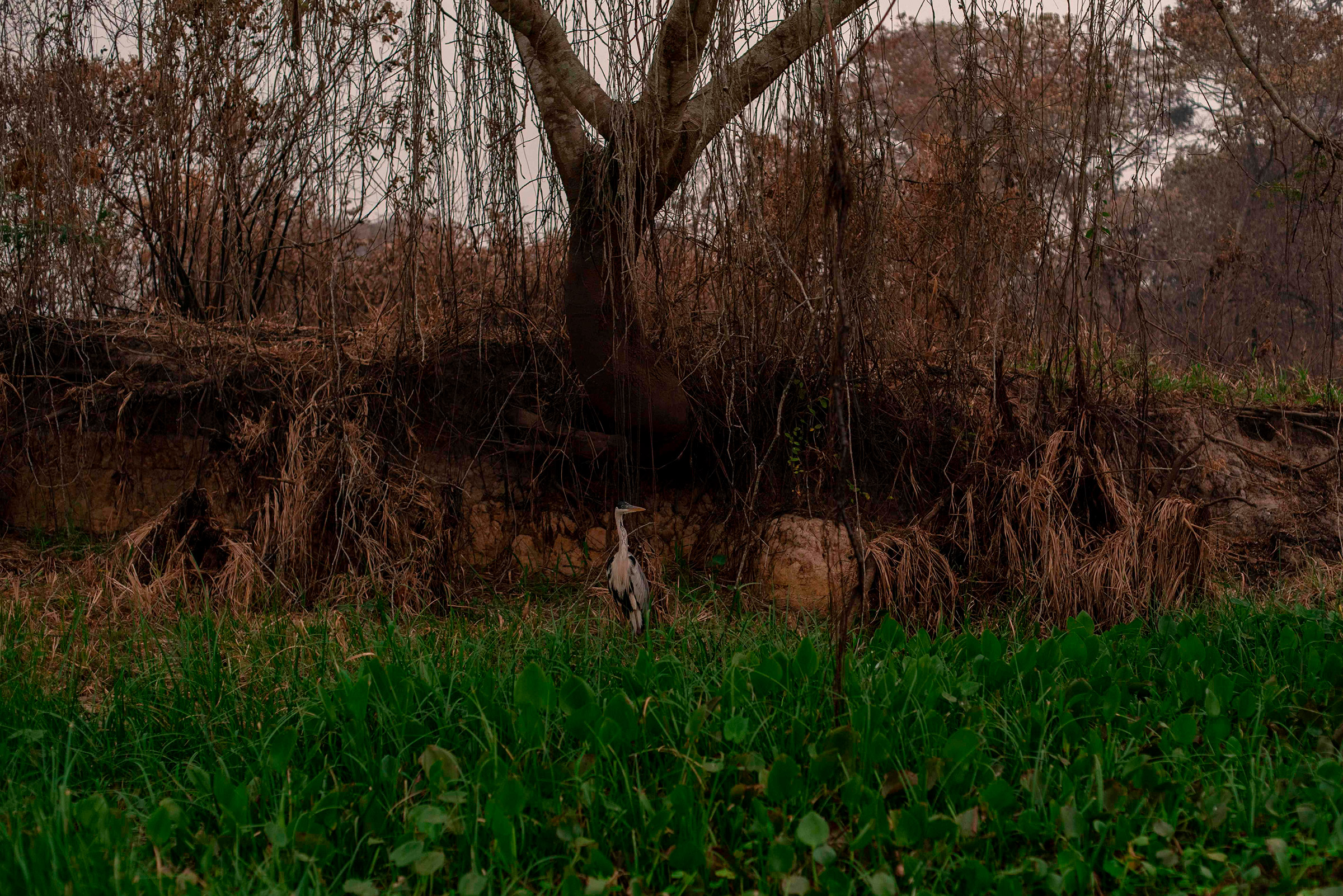 A Cocoi heron in a damaged section of the Pantanal on Sept. 13.

In May, a video of a ministerial meeting, published as part of a Supreme Court investigation into Bolsonaro, captured Salles telling the president that they should take advantage of the media’s preoccupation with the COVID-19 pandemic “to push through and change all the rules and simplify norms.” In July, the federal public prosecutor’s office filed a request to remove Salles from office on the grounds that he is “violating his duty to protect the environment.” The case has not yet been reviewed and prosecutors re-upped it to a federal court on Monday.

Activists say Salles is working to appease certain business sectors that form a crucial part of the president’s support base. “He’s doing exactly the job he was put there to do,” says Rômulo Batista, spokesman for Greenpeace Brazil’s Amazon campaign. ”As a result, he’s by far the worst environment minister since Brazil returned to democracy” more than 30 years ago.” 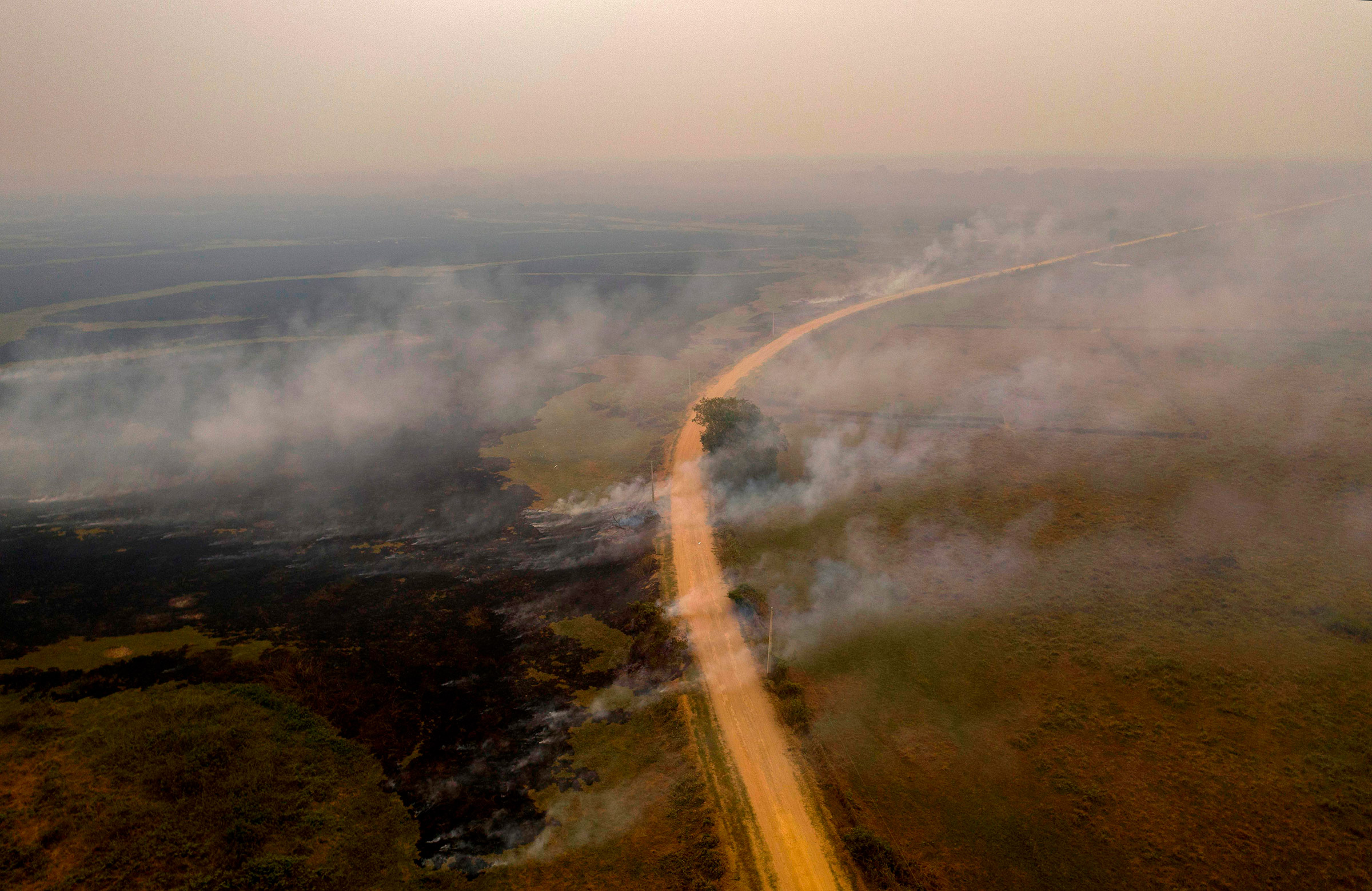 Smoke billows from fires near the Transpantaneira road on Sept. 14.

In October, a 17-year-old climate activist burst into a public hearing in Brazil’s congress to hand Salles a trophy. It read ‘O Exterminador do Futuro’—the Brazilian name for 1984 post-apocalyptic film The Terminator. Others have used that name to refer to Salles’ work as a minister before, including former environment minister Marina Silva, when she and seven other former environment ministers—who had served in Brazilian governments across the political spectrum—warned of the speed with which Bolsonaro and Salles are undoing their work.

Before his appointment to the federal government, Salles served as the head of the São Paulo State Environment Department, where he was convicted by a state court for “administrative dishonesty”, in part over his role in altering maps in a state environmental plan to benefit mining companies. At the time he said he was planning to appeal the decision. 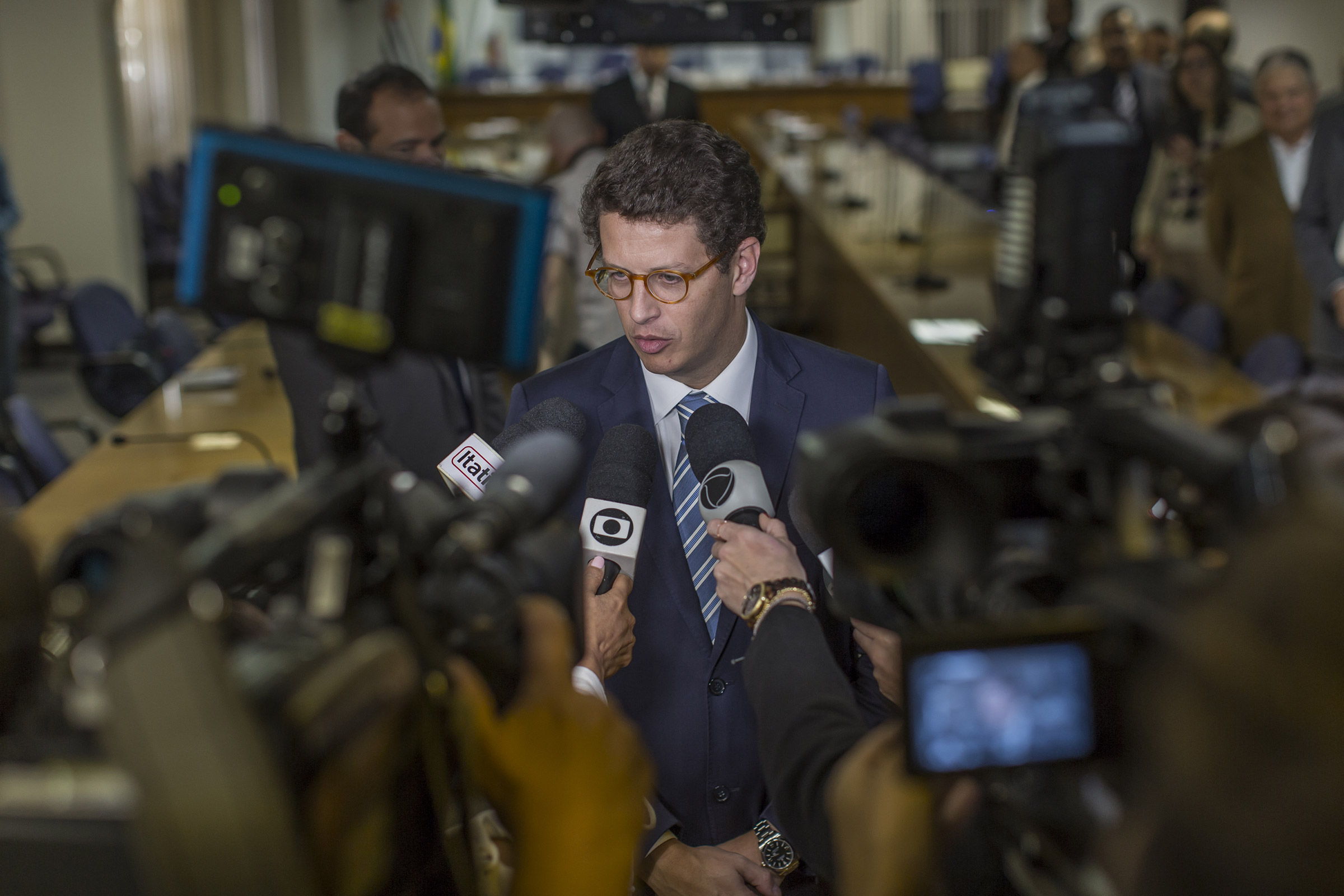 So far this year, Salles has used less than 0.4% of the environment ministry’s budget for federal policy initiatives, according to a study by the Climate Observatory, a network of Brazilian civil society groups. The minister has fired large numbers of officials, including those that disagree with controversial decisions, and left posts vacant. In recent months, environmental media outlets such as Mongabay reported that staff in environmental agencies have been subject to intimidation for speaking to the media. In May this year, Salles attempted to transfer the right to cede forested areas to private businesses from the environment ministry to the agriculture ministry; the move was blocked by a federal court who said it required legislative approval. Meanwhile, Ibama, the environmental agency that reports to Salles’ ministry, has relaxed rules allowing the exports of illegally-logged timber—a key driver of deforestation in the Amazon.

Addressing his most recent rollback on mangroves and restingas, Salles told CNN Brasil on Monday that existing protections for coastal areas were a “typical example” of “policies constructed from a certain kind of radicalism” that he has been trying to undo since entering government. In his view, Brazil’s complex bureaucratic rules on the environment restrict the country’s development and need to be simplified. He argues that the restrictions on mangroves and restingas actually encourage crime and illegal environmental destruction by limiting the economic opportunities of communities and leaving the areas without a human presence to police them. Citing Bolsonaro’s economy minister Paulo Guedes, Salles told the broadcaster, “Poverty is the worst enemy of the environment.” (Salles’ office did not respond to TIME’s request for comment.)

Read More: Brazil Is Starting to Lose the Fight Against Coronavirus—and Its President Is Looking the Other Way

Another pillar of the minister’s philosophy on the environment is a belief that if the international community is concerned about environmental destruction in Brazil, they should pay to stop it. Like President Bolsonaro—who last year told German Chancellor Angela Merkel to “reforest Germany” rather than worry about the Amazon—he has lashed out at foreigners who intervene in Brazilian environmental business. In September after Leonardo DiCaprio shared a video criticizing deforestation of the Amazon, Salles told him on Twitter to “put his money where his mouth is” and sponsor a Brazilian park. This week he announced he would create a new private carbon market this week, in which European businesses will pay Brazil to do conservation projects in order to offset their carbon emissions—an idea that climate experts view as deeply problematic.

For critics, Salles’ agenda is designed only to serve groups that support his boss politically. According to Marcio Astrini, executive director of the Climate Observatory, these groups include developers and agribusiness interests who would benefit from land regulations being relaxed, as well as groups who seek to illegally take over land in the Amazon to farm or pan for gold. Brazilian media has reported that Salles has held meetings with illegal land grabbers and gold panners while in office. 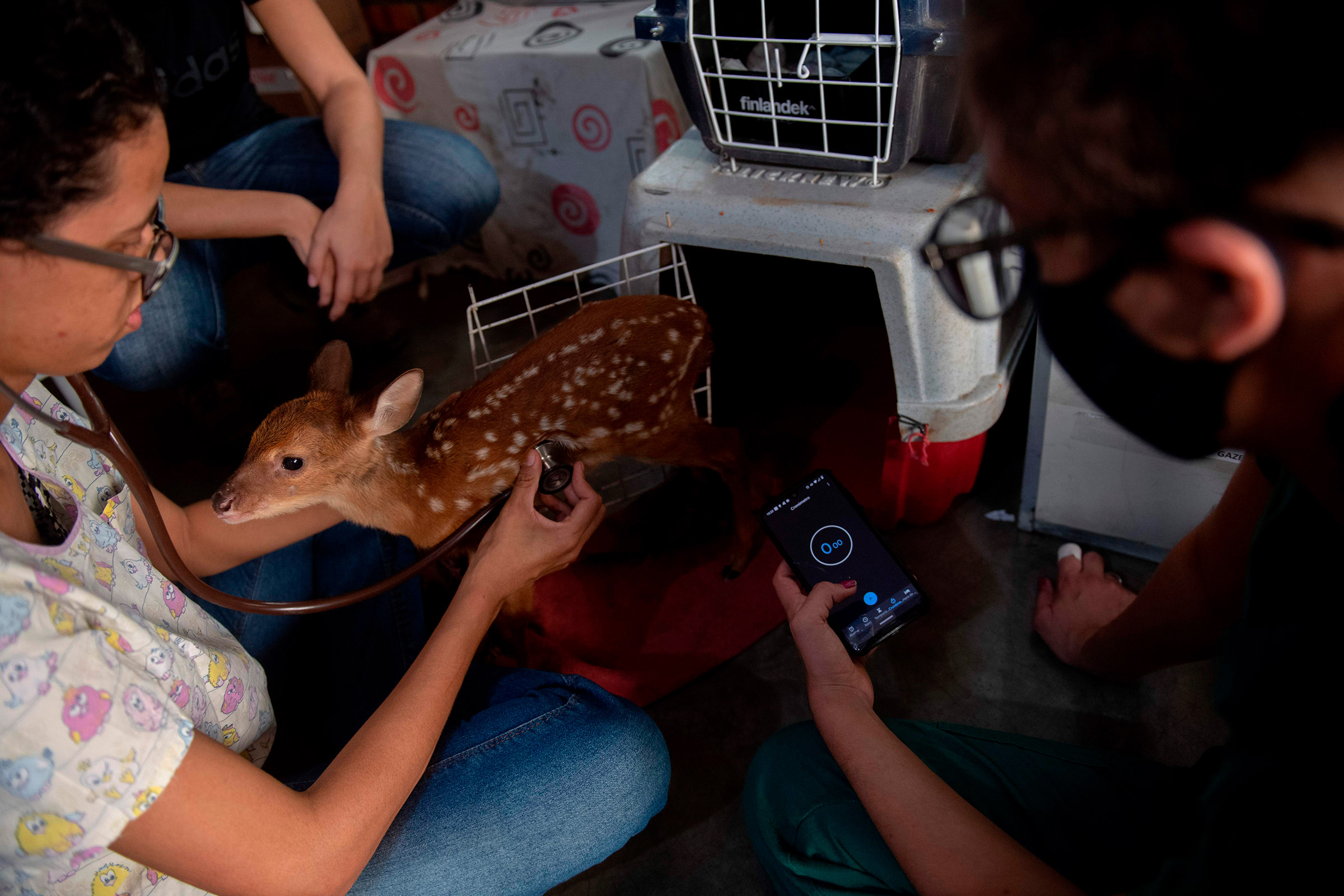 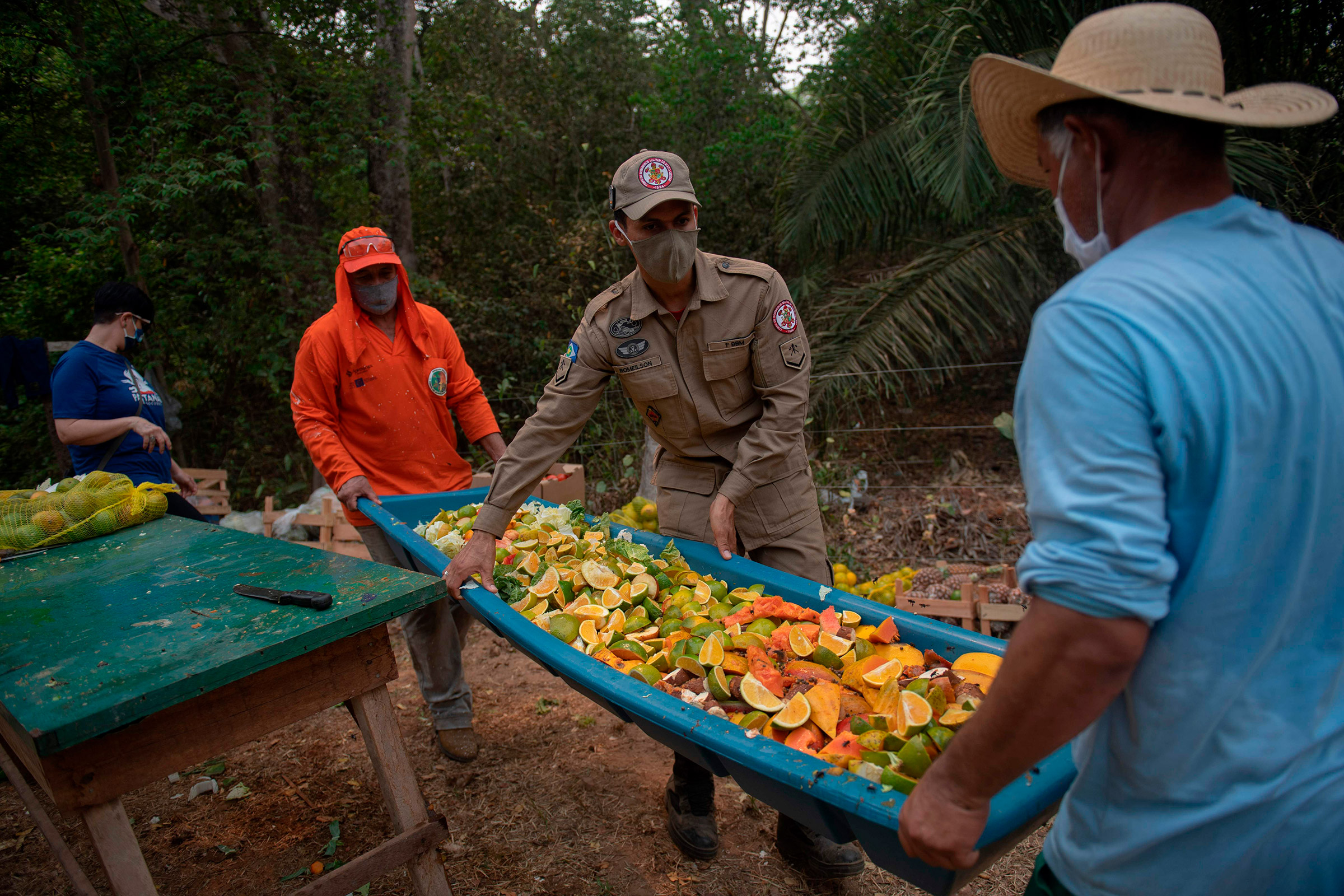 Inmates organize food to be distributed to animals on Sept. 19. 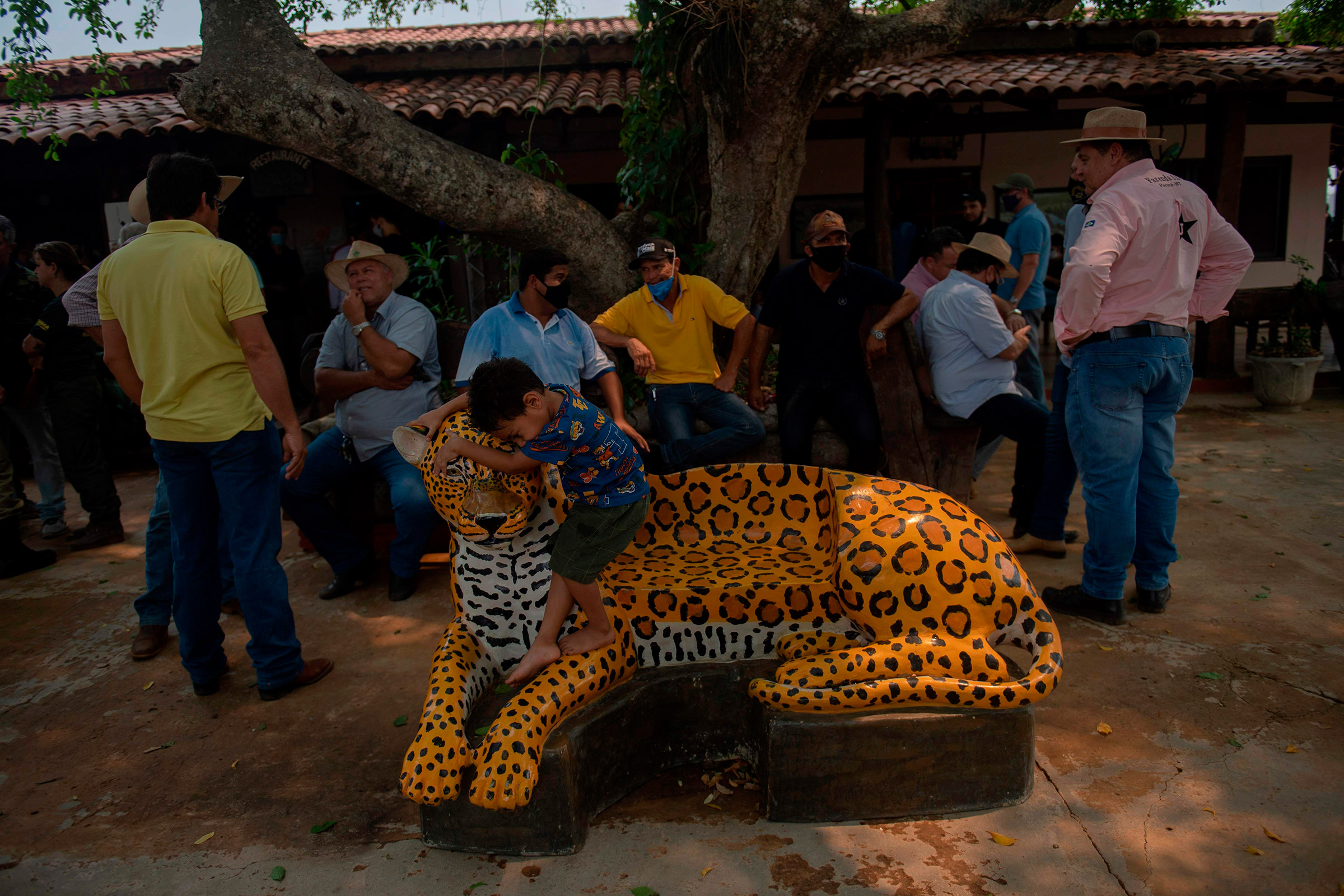 Farmers wait for a meeting with politicians on Sept. 19 to discuss the record fires in the Pantanal during the dry season.

Batista, from Greenpeace, says policy coming out of Brasília directly contributes to the fires raging in the Amazon and Pantanal. Moves like weakening regulations on timber and failing to fund conservation efforts have a clear impact. But also, he says, Salles has worsened a “[culture] of impunity that we have in Brazil for those that commit environmental crimes.” Less than 5% of the fines given by Ibama end up getting paid, he says.

In the Pantanal, both state governments and federal agencies have sent firefighters to help fight the flames. (The Instituto Homem Pantaneiro, where Larcher works, is raising money to sustain a permanent fire-fighting corps to look after the Pantanal as climate change is likely to worsen future year’s fires.)

But a lot more could have been done to prevent the ravages of this year, according to Larcher. The government did not adequately fund measures like the clearance of dead vegetation in public areas, she says, which would have slowed the spread of the fires. “The Pantanal National Park of Mattogrossense is 135,000 hectares and has two employees. How are they alone going to do all the work and management and prevention to make sure these areas don’t catch fire?”

Twelve prosecutors signed the July request to remove Salles from office, which accuses the minister of attempting “to dismantle the institutional and normative structures of federal environmental protection agencies.” The ministry of the environment dismissed the prosecutors as holding “evident political-ideological bias in a clear attempt to interfere in public policies of the Federal Government.” The case is yet to be heard.

But Astrini of the Climate Observatory says removing Salles from office would likely not solve Brazil’s environmental problems. “Salles is just a very good employee. It’s very important that they try to remove him, but if he goes, Bolsonaro will choose another person to fulfill his agenda.”

The best hope Brazilian environmentalists have of holding on to protections may lie in the judiciary. Federal courts have blocked a rule change by the government’s indigenous rights body FUNAI, that would have allowed land grabbers on indigenous lands to register their ownership officially. Environmental groups and political parties are challenging a number of Salles’ decisions in courts—including his failure to use funds available to him, Ibama’s relaxation of regulations on timber, and, now, the removal of protections for coastal wetlands. 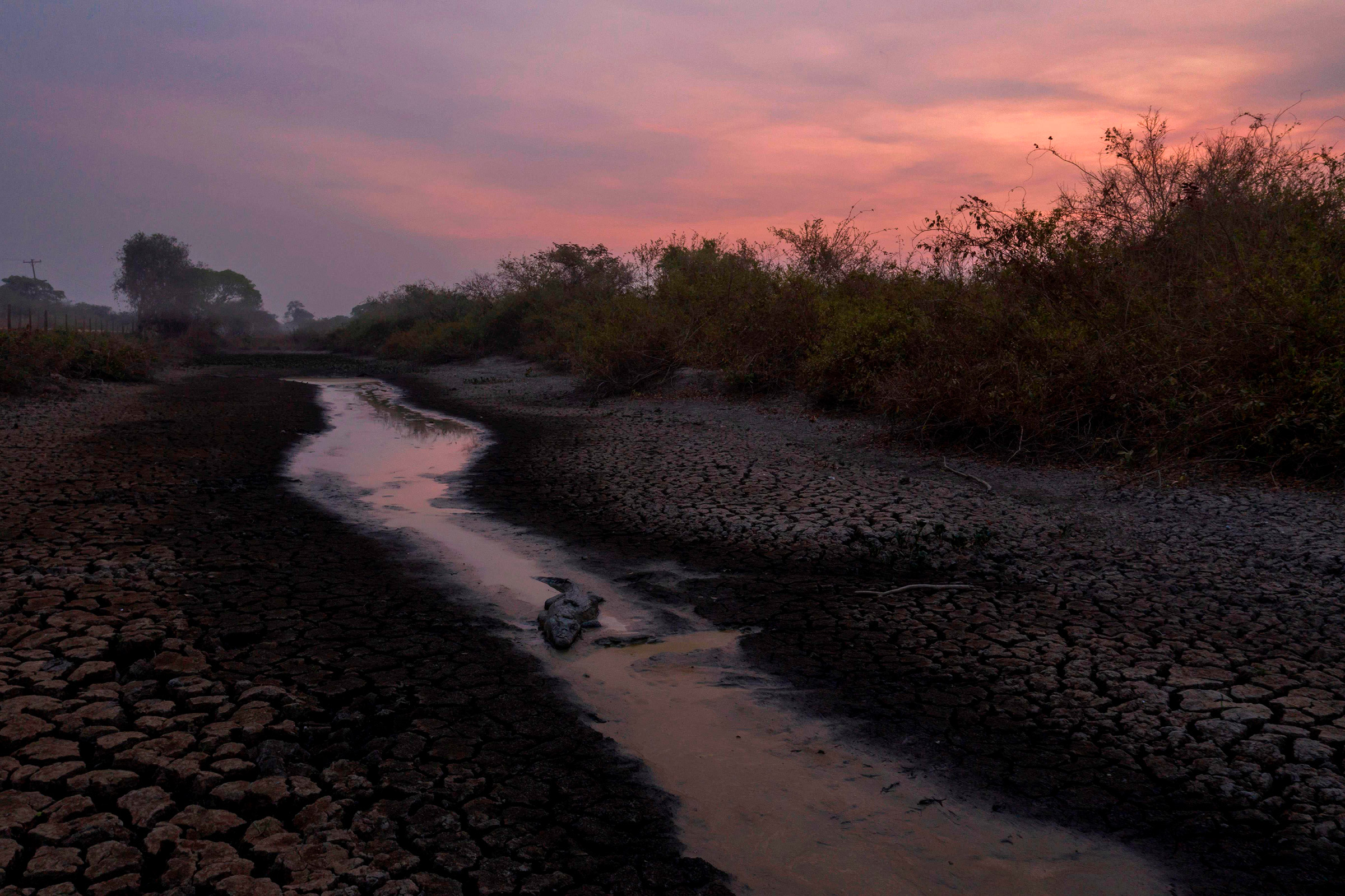 A dead alligator in the wetlands on Sept. 12.

International pressure is also proving another important tool. In July, 29 global companies sent an open letter to Vice President Hamilton Mouraou warning that they would be unable to invest in Brazil if there was “an unacceptable risk of contributing to serious environmental degradation or human rights violations.” Soon after meeting with a group of the firms’ executives, the government announced a 120-day ban on setting fires in the Amazon, twice as long as the moratorium initially implemented in 2019. The ban was not sufficiently enforced to prevent almost 30,000 fires spreading through the rainforest in August. The risk of losing a trade deal with the European Union, though, could force further concessions, with several E.U. member states expressing concern in September over the implications for Amazon.

Given Bolsonaro and Salles’ public statements on the judiciary and international community, Astrini says, such pressure won’t fundamentally alter their agenda. “We’re not going to change their actual opinions on the environment,” Astrini says. “But with enough pressure we might be able to neutralize the environmental setbacks they’re creating.”

For Larcher, surveying the destruction on the ground in the Pantanal, the future of environmentalism in Brazil feels bleak. “It’s very hard to be optimistic at the moment,” she says. “We’re not many people with not much money and a lot of work. The fire makes you think, where will it end?”

Jessie Buckley, the Queen of Fall 2020