No one writes better legal thrillers than John Grisham. There was a time when his bestsellers were being adapted to screen every year. Top directors and top actors vied to be a part of such prestige projects. His books were racy page-turners and the film adaptations did justice to them in most cases. Presenting a list of some of the best adaptations of John Grisham’s fast-paced novels for your viewing pleasure during the lockdown period.

Mitch McDeere (Cruise) is a brilliant law student whose life changes when he’s hired by a boutique law firm set in Memphis, Tennessee. At first, it all looks too unbelievable to be true. He’s given a luxury car, a well-furnished house and his employers are even willing to pay off all his student loans at one go. All they demand in return is utmost loyalty. Mitch and his wife Abby (Jeanne Triplehorn) feel things couldn’t be better for them than this. Then, things start to unravel. Mitch finds out that what mostly his firm does is to help maintain offshore accounts of rich clients. That their biggest client is a mafia family and the firm runs a money-laundering scheme for them. He cuts a deal with the FBI to get out but getting out isn’t that simple. He’s going to need all his wits and his courage in order to do that. 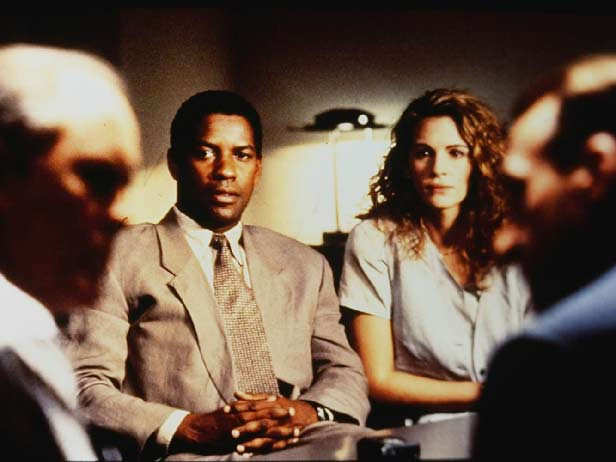 Law student Darby Shaw (Julia Roberts) writes a brief about the possible similarities between the murders of two supreme court judges. She passes on her finds to her professor Thomas Callahan (Sam Shepherd), who’s also her lover. Callahan gives it to FBI lawyer Gavin Verheek (John Heard) to read and all hell breaks loose when the brief is brought to the attention of the White House. The brief alleges that an oil tycoon, who wanted a dodgy oil deal to go through, is behind the killings as the judges who were killed were staunch environmentalists. As the businessman is close to the president, the powers to be want her to stop investigating. They even get her professor killed. She enlists the help of investigative journalist Clay Grantham (Denzel Washington) working for the Washington Herald. He too has arrived at the same conclusions as Darby. They team up to gather evidence to back their theory and even at the cost of great personal danger manage to do so. The film ends with Grantham eventually breaking the story in his newspaper. 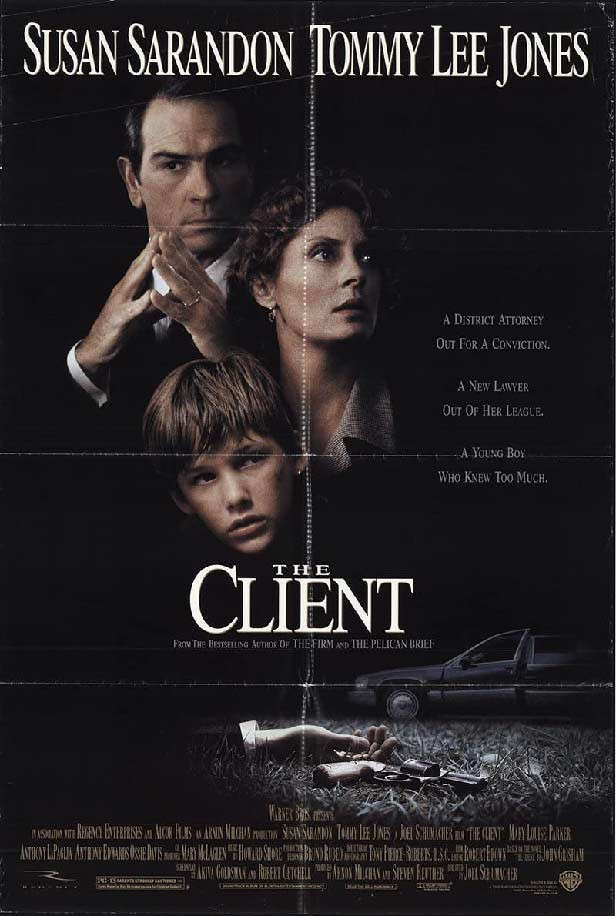 11-year-old Mark Sway (Brad Renfro) and his little brother are witnesses to the suicide of a mob lawyer. His brother falls into a coma stunned by the event and he himself becomes the target of both the mob and the federal prosecutor Roy Foltrigg (Tommy Lee Jones). The gangsters and Roy both suspect that the dying man has told the brothers where the body of a senator killed by the mob is hidden. They both make life hell for the boy in their different ways. He somehow gets Reggie Love (Susan Sarandon) a recovering alcoholic with her heart in the right place to represent him. Love fights hard to get the brothers into a good witness protection programme and tries to get the authorities to their side. Susan Sarandon and Tommy Lee Jones’ performances were much appreciated by the critics. 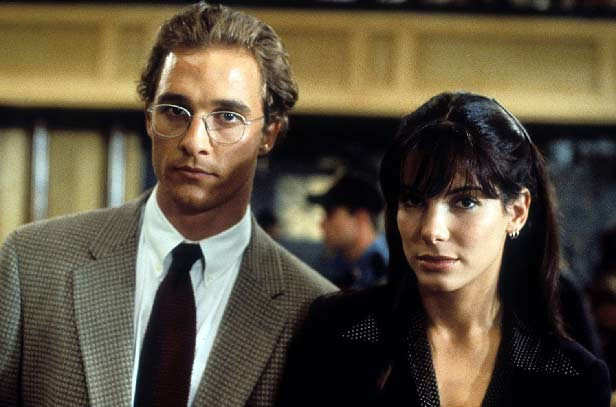 The film asks two very pertinent questions –can a black man receive a fair trial after killing two white men who had raped and assaulted his daughter? And can this man get fair legal representation? Matthew McConaughey gives the performance of a lifetime playing Jake Brigance, the white lawyer chosen by Carl Lee Hailey (Samuel L. Jackson), to represent him. He faces constant threats by white supremacists for his stance. His house is burnt down and even his wife and daughter get threatened. In the end, he makes an emotional appeal to an all-white jury, asking them to let go of their bias and evaluate the merit of the case in human terms without bringing the politics of colour into perspective. His words win through and he succeeds in getting a not guilty judgement. 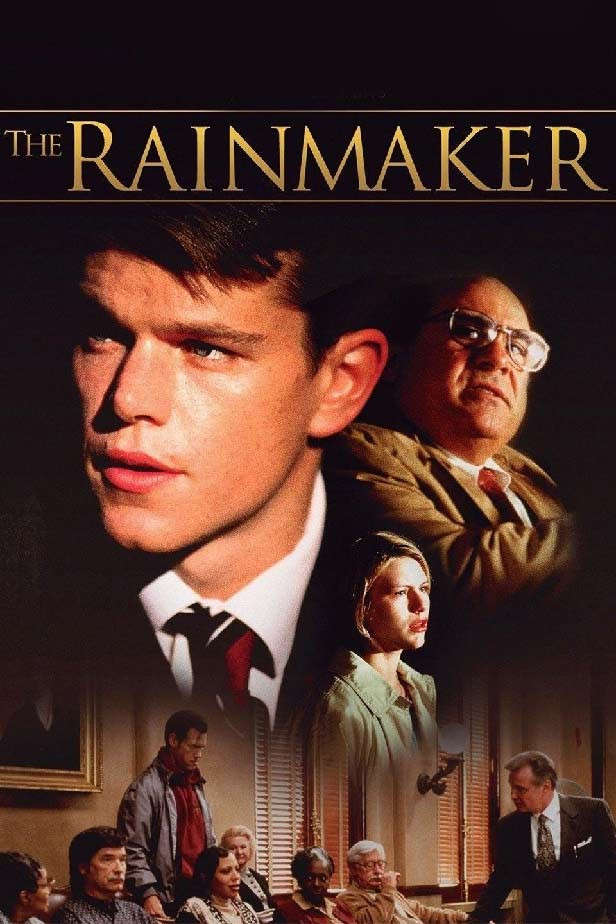 Rudy Baylor (Matt Damon), fresh out of law school and desperate for a job, accepts the offer of a shady lawyer Lyman “Bruiser” Stone (Mickey Rourke) to become his associate. Sadly for him, Bruiser gets busted by the police, leaving Rudy to fend for himself. He becomes friends with an eccentric paralegal, Deck Shifflet, played wonderfully by Danny DeVito. Together, they intend to start a law firm. One of their cases involves domestic violence, which Rudy ‘solves’ by giving the husband of his client a taste of his own medicine. The second case is more serious. The 22-year-old son of his clients Dot and Buddy Black is dying of leukaemia but could have been saved with a bone marrow transplant. However, their insurance carrier Great Benefit declines to pay them the money. Rudy hasn’t argued a single case in the court before and he’s up against a big entity with a battery of experienced lawyers. He’s flustered at first but later, his and Shifflet’s persistence paid off and they are able to prove the insurance company’s negligence in the court. He wins the case but the insurance company declares itself bankrupt and is unable to pay any damages to his grieving clients. Now that he has made a name for himself, Rudy decides to forego active practice and makes up his mind to teach law. 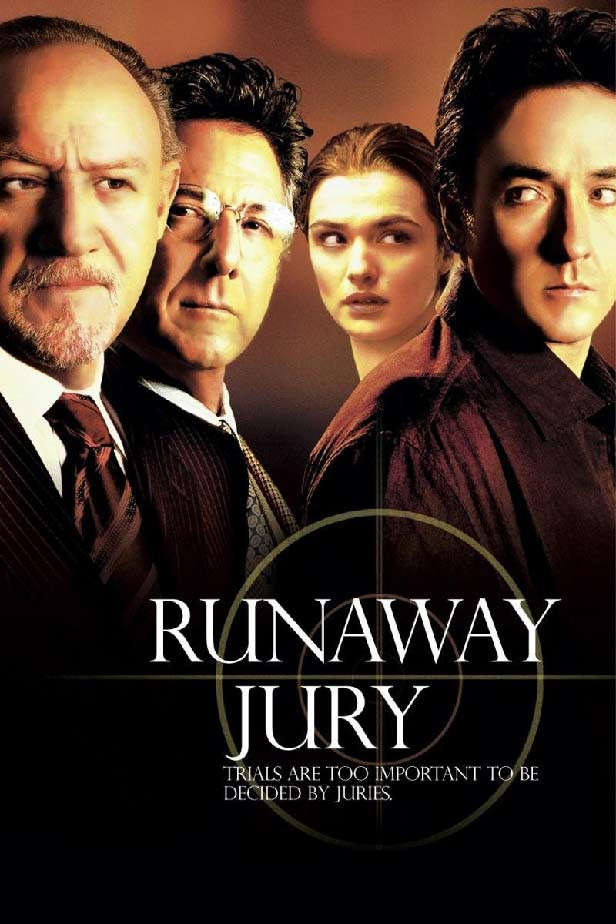 A stockbroker (Dylan McDermott) is gunned down in his office, along with 10 other co-workers. His widow (Joanna Going) takes the gun manufacturer to court. Feeling threatened, the gun manufacturers hire the services of Rankin Fitch (Gene Hackman), who is an expert in picking up an expert jury. On the other side of the fence is Wendell Rohr (Dustin Hoffman) an upright lawyer who wants to teach a lesson to the gun lobby. Both sides are shocked to know that there is someone on the jury who can help influence the verdict. They are both made an offer amounting to millions. Both are reluctant to pay at first but are forced to rethink their strategy as things escalate. The film asks the question that where is the moral victory when the jury itself can be bought? Both Gene Hackman and Dustin Hoffman were superb as antagonists and so were John Cusak and Rachel Weisz, the influencers who were able to manipulate the jury to their whims.