Newspapers and newspapermen are said to be the conscience keepers of society. Ideally, they should be free of the diktat of the advertisers and the government and publish the closest possible version of the truth. When they go ahead and do it, that’s when real headlines happen. Journalistic work isn’t glamorous at all but painstakingly boring. It involves following leads at odd hours, checking the facts with a telescope and connecting the dots patiently till you get the whole sordid picture. Presenting some of the best movies based on newsrooms and newshounds to have come out of Hollywood in recent times.

A thief fleeing through Georgetown in Washington is shot by a man carrying a briefcase. A deliveryman who witnesses the incident is also shot by the killer and is left in a coma. The following morning, a young woman is killed and it could have been suicide Congressman Stephen Collins (Ben Affleck) confides in his newspaper journalist pal Cal McAffrey (Russell Crowe) that he was having an affair with the girl and asks for help. It can all be related to an investigation into PointCorp, a shady private defence contractor. Cal is assisted in his investigation by Della Frye (Rachel McAdams), a reporter and blogger with the online division of Cal’s newspaper. As the two dig deeper, they become the target of a mysterious assassin themselves. All is not what it seems and even Collins could be involved. The film’s plot had plenty of twists and turns and coasted on Crowe’s portrayal of a shrewd crime journalist who has a nose for a story. 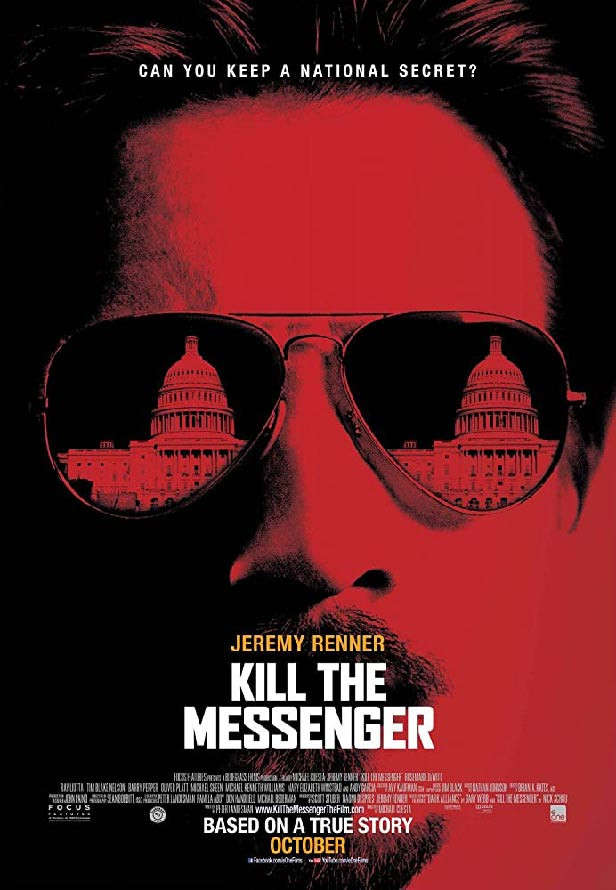 It’s a biographical crime thriller based on the book of the same name by Nick Schou and the book Dark Alliance by Gary Webb, which focuses on CIA involvement in cocaine trafficking. In 1996, journalist Gary Webb (Jeremy Renner) then working for the San Jose Mercury News, broke a story holding the CIA directly responsible for using Nicaraguan rebels to smuggle cocaine into the U.S. in exchange for raising funds to support the contras. His shocking allegations don’t go down well and the CIA hits back, exposing his personal life, questioning his journalistic ethics and putting pressure on his employers. All such things take a toll on his mental and emotional health. Webb is said to have committed suicide in 2004. The film’s highpoint is the straight-from-the-heart performance by Jeremy Renner as Gary Webb. 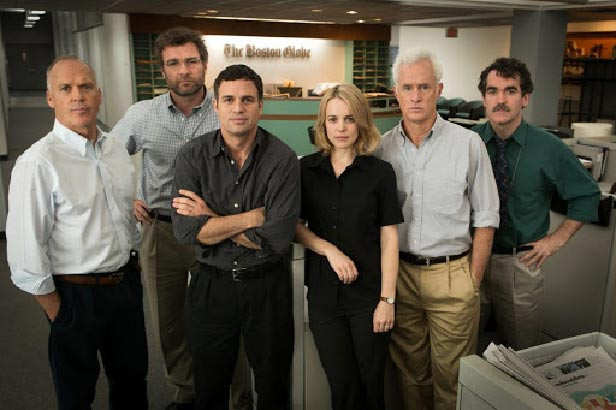 The film is based on The Boston Globe’s Spotlight team and its investigation into cases of widespread child sex abuse in the Boston area by numerous Roman Catholic priests. It is based on a series of stories by the Spotlight team that earned The Globe the 2003 Pulitzer Prize for Public Service. The film is a kind of press procedural. We see journalists taking notes, tapping their sources, checking and cross-checking stuff twice and thrice because of the sensitive issue at stake. They come to realise that the problem isn’t just local or national but leads back to the Vatican itself. It seems that the Church knows about the sins committed by the parties involved but chose to keep a blind eye and worse, concealed them from the public eye, helping the perpetrators roam scotfree and hunt other victims. Sensitive performances by the entire cast make for compelling viewing. 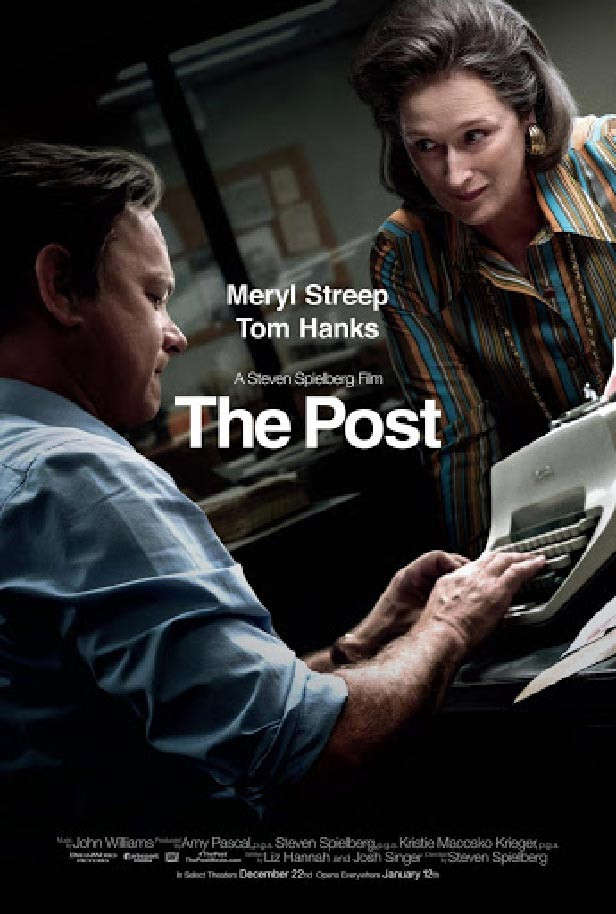 What can be better than having one of the best directors in the world — Steven Spielberg — directing two of the best actors in the world — Meryl Streep and Tom Hanks? The combination is mouth-watering indeed and lives up to the hype. The Post depicts the true story of attempts by journalists at The Washington Post to publish the Pentagon Papers, classified documents regarding the 20-year involvement of the United States government in the Vietnam War. All this was way before The Watergate Scandal hit the spotlight. This was the story that actually brought much-needed prestige back to The Washington Post and established its credentials as an unfearing sentinel of the truth. The film is fraught with tension as publisher Katharine Graham (Meryl Streep) debates with her chief editor Ben Bradlee (Tom Hanks) whether or not to publish the sensitive material they have that could very well tarnish the government’s image. They go ahead and print it and brave it out. The government retaliates with a lawsuit but the final verdict comes in the favour of freedom of the press. Both Streep and Hanks were in complete control of their characters and gave a wholesome lesson in flawless acting. 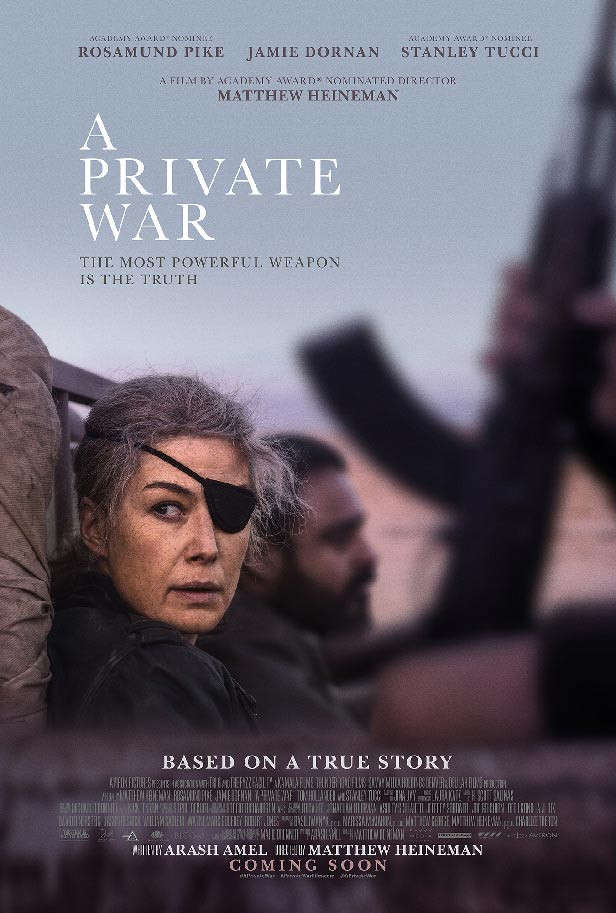 It’s a biopic on the heroic war journalist, Marie Colvin. Based on an article Marie Colvin’s Private War written by Marie Brenner, the film retraces celebrated war correspondent Marie Colvin’s journey from the war-torn Homs in Syria, where she died in 2012 to around a decade or so back. It opens in Sri Lanka, where she has come to meet the commanders of the Tamil Tigers. She poses some hard-hitting questions about the collateral damage caused to the common people amidst the struggle and is moved by the pitiful conditions around her. She tragically loses an eye when her escort is hit by the government forces. As a result of the injury, she became famous as an eyepatch-wearing journalist after the incident. The pirate-like look added to her aura. In one of the film’s key scenes, she states that she sees such things so that others don’t have to. And that pretty much sums both what she was and what the film is in one line.