The road movie genre hasn’t seen widespread usage in Bollywood. It is only in the last 10-15 years or so that filmmakers have been approaching this genre. And barring aside such obvious names as Farhan Akhtar, his sister Zoya Akhtar, and Imtiaz Ali, this form of narrative treatment hasn’t really found many takers in the mainstream Bollywood cinema. It’s an exciting genre nevertheless and lends itself to lots of possibilities. Currently, when our movement is restricted because of the COVID-19 crisis, we’re sure you would like to watch some road movies to appease your wanderlust.

We’re used to seeing the North in Hindi films and the lush beauty of South India offers a pleasant contrast to that and reminds us how beautiful our country really is in totality. Avinash Arun’s cinematography gives the film a picture-postcard quality. The film is a laugh riot which will keep you in splits from the first frame itself. Unlike life, death doesn’t offer a second chance, however. We can only learn from the tragedy and move on, perhaps to take more chances, perhaps to let go of our inhibitions and lead a healthier, fuller life. Avinash (Dulquer Salmaan), loses his father in a road accident up North. Tanya (Mithila Palkar) loses her grandmother in the same accident but the coffins get swapped. Avinash travels from Bangalore to Kochi in the van of his friend Shaukat (Irrfan Khan) and picks up Tanya on the way from her hostel at her mother’s insistence. They keep getting into one misadventure after another and somehow get out of them unscathed. The film ends with them finding closure from each other and from their own selves as well. 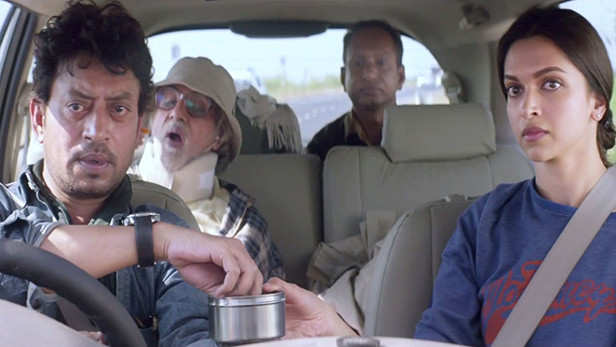 Piku is the story of a dutiful daughter who takes her father to Kolkata from Delhi via road because he can’t fly. Piku Bannerjee (Deepika Padukone) is an architect living in Delhi who loves her widowed father Bhaskhor Bannerjee (Amitabh Bachchan) but at the same time is constantly irritated by him because of his eccentricities. He suffers from acute constipation and tends to relate everything in his life to his bowel movements. He wants to go to Kolkata to visit his ancestral home and Piku reluctantly agrees to take him there. She takes the help of Rana Chaudhary (Irrfan Khan), who runs a taxi business. As no driver is available, Rana decides to drive them to Kolkata himself. They experience several misadventures on the way. Rana is constantly irked by Bhaskhor’s eccentric ways but soon begins to see past the exterior. He begins to like Piku as well. The three develop a bond, which makes Rana decide to spend some time with the family in Kolkata. Her maternal aunt (Moushumi Chatterjee) too joins them there. Bhaskhor takes a bike ride around Kolkata noticing the various changes and finally finds closure within himself, dying peacefully in the night. 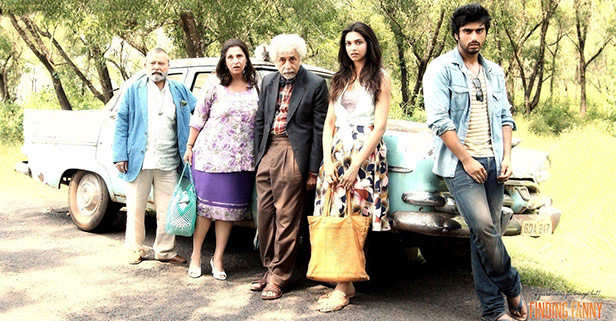 Homi Adajania tells an absurd tale about human relationships with this road movie set in Goa. Ferdinand ‘Ferdie’ Pinto (Naseeruddin Shah), comes to know that the love letter he wrote to the love of his life, Stefanie ‘Fanny’ Fernandes (Anjali Patil), never really reached her. He wants to travel to her last given address in order to narrate his true feelings to her. Angelina ‘Angie’ Eucharistica (Deepika Padukone), a young widow living next door and a family friend, decides to help him. They are joined in this journey by her mother-in-law Rosalina ‘Rosie’ Eucharistica (Dimple Kapadia), Angie’s childhood friend Savio Da Gama (Arjun Kapoor) and an artiste Don Pedro Cleto Collaco (Pankaj Kapur) who develops the hots for Rosie. Savio and Angie too rediscover lost love on the way and get a chance to reconnect. Ferdie, in the end, does find where Fanny lives but he has come too late. The much-married Fanny has passed away and the group reluctantly joins the funeral. It was a film full of eccentric characters ruminating on the true nature of love and life and had several dark moments as well. In the end, however, this motley crew of characters do accept the truth about themselves and become better people because of the journey they took together. 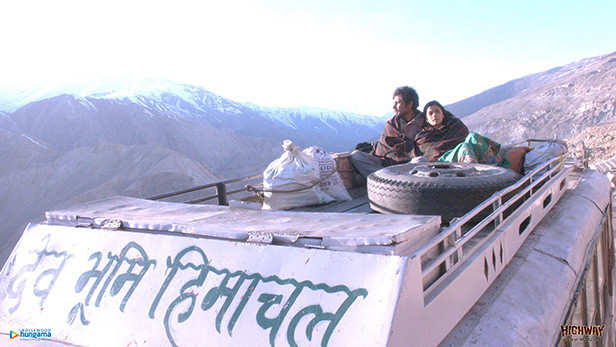 The film is primarily the story of two characters from vastly different backgrounds who take a road trip across six states in a truck. Imtiaz Ali reportedly made the film on the go, letting the locations, the scenery dictate what’s going to happen next. The film was shot on highways of Delhi, Haryana, Rajasthan, Punjab, Himachal Pradesh, and Kashmir. Veera Tripathi (Alia Bhatt) is the daughter of a rich Delhi-based businessman. One day before her wedding, she’s kidnapped from a petrol station. While her abductors initially panic after coming to know of her father’s high connection, they nevertheless agree to follow what they had planned. They move her from city to city in a truck to avoid getting detected by the police. Veera comes close to the leader of the gang, Mahabir Bhati (Randeep Hooda), and even develops romantic feelings for him. He’s initially sceptical by this change but in the end, comes to accept it as one of life’s insoluble puzzles. He instinctively understands she must have gone through emotional trauma in the past just like him. Unfortunately, he’s killed in a police shootout but the road trip and the time she had spent with him gives her the courage to speak about being abused by her uncle as a child. She leaves the house and sets up a small business in the mountains, finally being at peace with herself. 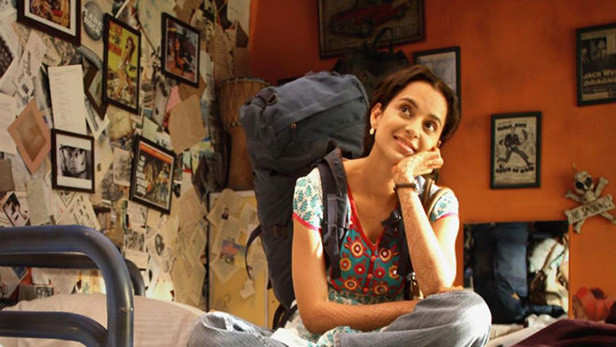 The film was shot extensively in Paris and Amsterdam and centres around a young woman’s solo trip. The film was made on a limited budget and hence the actors used to live in modest hotels. As the film was shot over multiple locations, the cast and the crew literally had a road trip experience rushing from one place to the other. When Rani Mehra’s (Kangana Ranaut) fiance Vijay (Rajkummar Rao) cancels their marriage one-day prior to the wedding date, a devastated Rani plans to go ahead with her honeymoon in Europe as everything has been pre-booked. Rani meets Vijayalakshmi (Lisa Haydon), a bohemian woman, who takes her around the real Paris hot spots and with whom she has adventures aplenty. She then takes a train to Amsterdam and is forced to live in a hostel, where she quickly makes friends with a trio of international visitors. She romps through Amsterdam’s famous Red Light district, not completely understanding what it’s famous for. She also ends up impressing a renowned chef with her culinary skills. She gains enough confidence from the trip to formally chuck Vijay out of her life for good 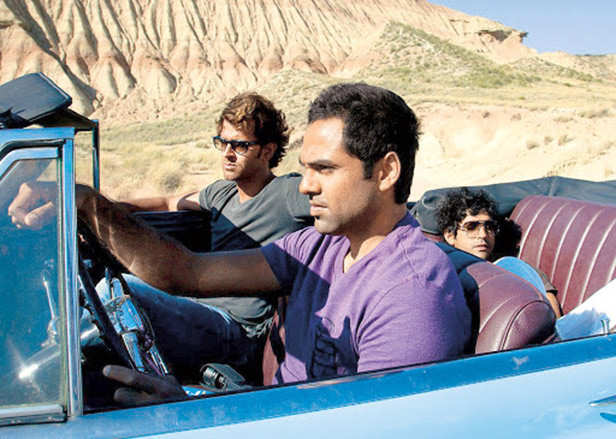 The film was a two-hour long advertisement for Spain. The La Tomatina festival of Buñol was re-created for the song Ik junoon. The flamenco song Señorita was filmed in Alájar, a town in the province of Huelva. The climax of the film, which features the Running of the bulls, was filmed at Pamplona, which has traditionally been the centre for the sport. ZNMD centred around a road trip taken by three friends, Arjun (Hrithik), Kabir (Abhay) and Imran (Farhan). While Kabir works for his family’s construction business, Arjun is an investment baker and Imran is a copywriter. They plan a three-week road trip across Spain before Kabir’s marriage and make a pact that each will pursue a thing that they were afraid of doing during the length of the trip. Kabir chooses underwater diving and Arjun who doesn’t know how to swim gets to spend time with diving instructor Laila (Katrina Kaif). Arjun’s choice is skydiving, where Imran initially struggles because of his fear or heights. The last adventure, chosen by Imran, is that of taking part in the Running With The Bulls race. The road trip helps the three friends to find fresh perspectives about their own life and about each other.

Ginny & Georgia: Who Is Better For...