Some people have an inherent good luck charm that rubs off whatever they touch. The doe-eyed danseuse Asha Parekh was one such person. Other actors gave hits, she turned out silver, golden and even platinum jubilees. She proved lucky for every hero she got paired with be it, Dev Anand, in Jab Pyar Kisise Hota Hai (1961), Shammi Kapoor in Teesri Manzil (1966), Rajesh Khanna in Kati Patang (1970) or Dharmendra in Mera Gaon Mera Desh (1971). Her regret was that critical appreciation never came her way despite the huge success. On the occasion of her birthday, we present a list of some of her best films down the years…

Asha Parekh was no stranger to films as she had been a child artiste in quite a few. She was just 16 when she made her debut in this Nasir Hussain directorial opposite Shammi Kapoor. The director kind of repeated the basic plot of his own debut film Tumsa Nahin Dekha (1957) but added so many twists and turns to it that one doesn’t understand it completely even after repeated viewings. Asha Parekh plays a rich heiress who is wooed by three guys. She falls for the most handsome one — Shammi Kapoor — of course but finds out he may not be what he claims to be. The film’s plot abounds with mistaken identities, lost-and-found shenanigans and a revenge track as well. Shammi Kapoor’s charm and energy and Asha Parekh’s elfin grace make us sit through the various twists and turns of the plot. Usha Khanna too made her debut as a composer with the film. The title song and other numbers like Yaar chulbula hai and Hum tum aur yeh sama are still popular today. 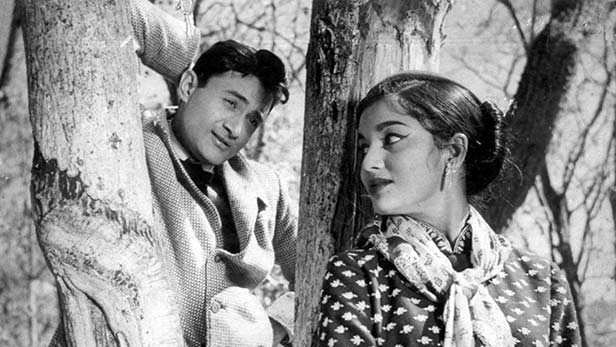 This movie has some evergreen songs composed by Shankar-Jaikishan, namely Sau saal pehle, Jiya O Jiya, Teri zulfon se, Uff yu ma. Asha Parekh and Dev Anand made for a great pairing. The film, which revolved around a convoluted plot with Dev Anand playing a triple role of sorts and being framed for murder was as frothy as they come and became a huge hit because of its music. 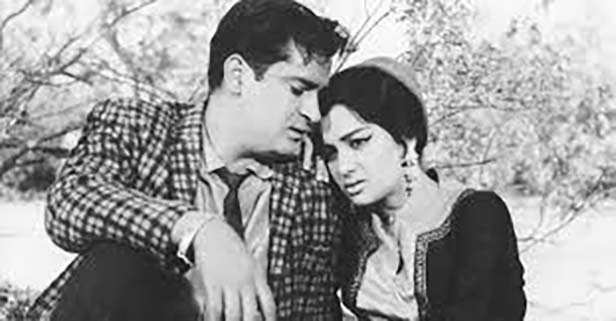 They say there is no better stylist in our films than Vijay Anand and this film proves it one more time. Teesri Manzil was a musical murder mystery. The tunes crafted by maestro RD Burman made the listeners wake up and take notice of his genius. He wasn’t an unknown entity as he has been assisting his father SD Burman for quite a while but here he showcased his own brand of music which was drastically different from his father’s when it comes to orchestration but not that different when it came to the melody. Rupa (Sabina) falls to her death from the third floor of a hotel in Dehradun. Her sister Sunita (Asha Parekh) feels Rocky (Shammi Kapoor) is behind the death and travels to Dehradun to expose him. However, Rocky has been impersonating as Anil and has been flirting with her all the time. He truly falls for Sunita and confesses the truth to her, claiming his innocence about her sister’s death. She’s furious with him and doesn’t pay heed to his pleas. She changes her mind when an attempt is made to end his life as well. They unite to find the real killer. The twist ending comes as a real shocker. Tunes such as Deewana mujhsa nahin, O haseena zulfonwali, O mere sona re remain chartbusters still. 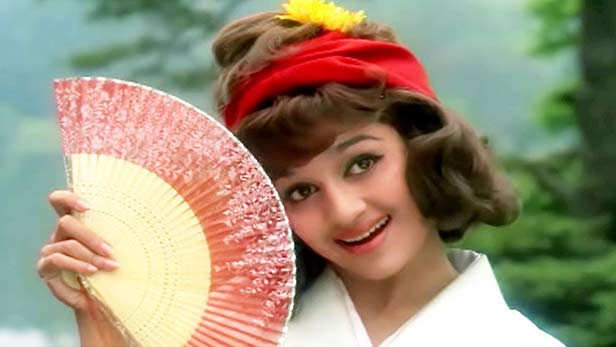 Pramod Chakravorty looked eastwards for this romantic venture, which was shot primarily in Tokyo. The love story acquainted Indians to the wonders of modern Japan. Its song, Sayonara sayonara became hugely famous. Ashok (Joy Mukherji) is being pressured to marry a woman he doesn’t love. His elderly mother asks him to travel to Tokyo to pick up his eight-year-old nephew, a recently orphaned boy named Chikoo. Ashok hopes to win his nephew over by taking him on an expensive shopping trip, but the boy escapes when his attention is diverted by a beautiful woman named Asha (Asha Parekh), whom he sees performing a traditional Indian dance on television. Asha was also orphaned as a child and raised by her uncle in the Indian community of Tokyo. Asha’s uncle wants her to marry a man she loathes. Ashok and Asha help each other out and fall in love in the process. 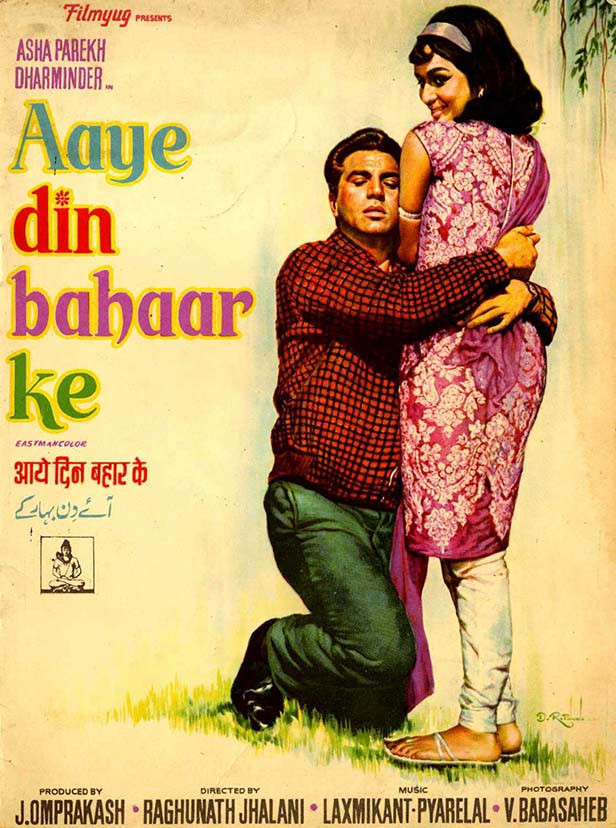 The film was a lost-and-found saga. Dharmendra played a devoted son who battles to clear the name of his unwed mother. Asha plays his love interest. The duo looked great together on screen for sure. J Om Prakash shifted to Laxmikant-Pyarelal with this film. The hit album included songs like Suno sajna sung by Lata Mangeshkar, Mere dushman tu meri sung by Mohammed Rafi, and Khat likh de by Asha Bhosle. 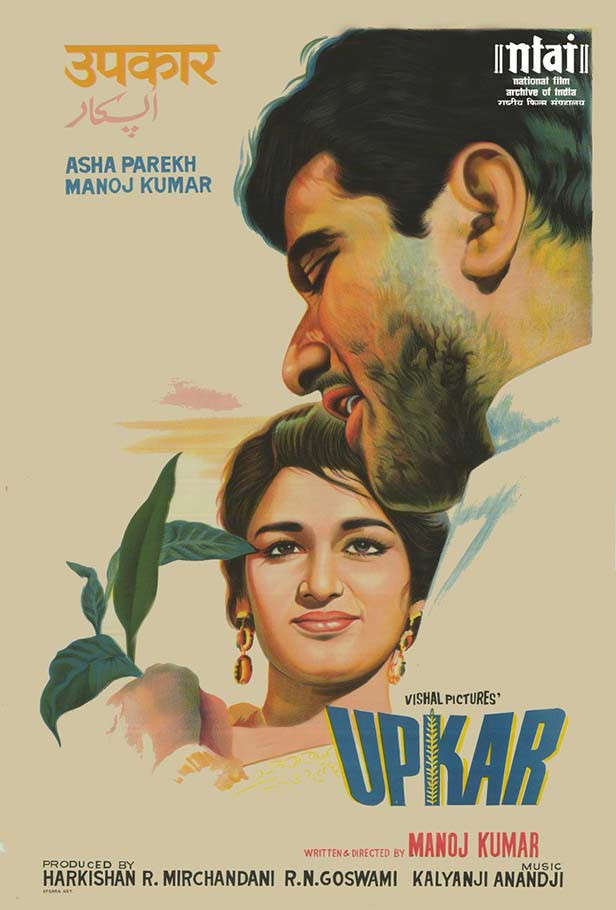 The film marked the beginning of Mr Bharat persona for producer-director Manoj Kumar. It’s said that the then Prime Minister, Lal Bahadur Shastri asked him to make a film on the slogan Jai Jawan-Jai Kisan, which was the rallying cry for the Indian youth after the 1965 war with Pakistan. The message was that the peace-loving, productive farmers can turn their ploughs into rifles and become war heroes if need be. It was Manoj’s debut as a director and he played both a Kisan (farmer) and Jawan (soldier). The war veteran wins medals and upon his return brings to heel his wayward younger brother (Prem Chopra), who had turned war-profiteer and was selling goods and medicines at the black market. Also, it had Asha Parekh espousing the cause of Family Planning, among other things. The film proved to be a turning point for Pran too. He was tired of being slotted as a villain in every film and greedily took on the role of the worldly-wise, one-legged Malang Chacha. The film proved to be a big blockbuster and well, made Manoj Kumar submerge his acting, writing and directing talent into patriotic material from then on. 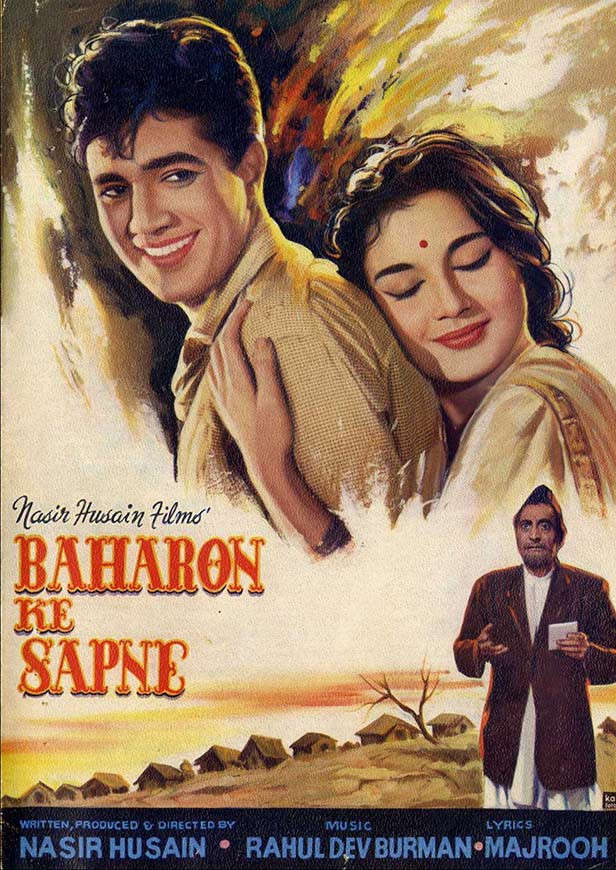 This realistic film was written by Rajender Singh Bedi and had Khanna playing an idealistic union leader. The film had none of the elements of the classic romance that Khanna later popularised with Aradhana. Rather it gave us glimpses of Khanna the actor before he was dubbed superstar. Asha Parekh doesn’t have much to do but looks ethereal as Khanna’s childhood sweetheart. Her aaja piya tohe pyar doon song is remembered even now. 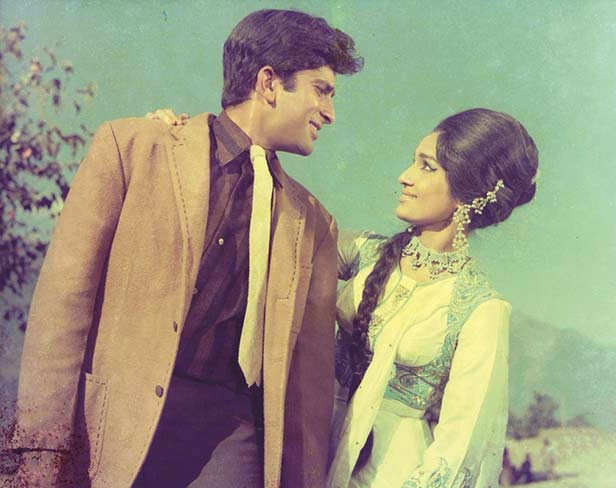 Lost and found formula was Nasir Hussain’s forte and Pyar Ka Mausam was no exception. Shashi Kapoor appeared as three different characters in the melodrama and had a gala time fooling the heroine, Asha Parekh and making her fall in love with him in the process. The romance was helped along by such songs as Ni sultana re and Tum bin, jaoon kaha. The latter song created a bit of a controversy as both Rafi and Kishore had sung two versions but Kishore’s version was deemed better. 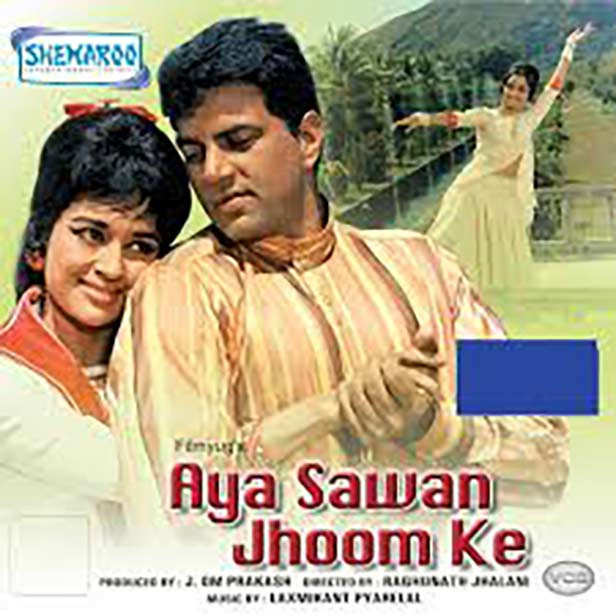 The film was a melodramatic, emotional rollercoaster. Dharmendra and Asha are in love but he accidentally kills her father. Guilt-ridden, he vows to take care of her family but doesn’t come clean about his crime. She disowns him when she finds him to be lying about other things as well. Laxmikant-Pyarelal gave hits like the title song, sung by Mohammed Rafi and Lata Mangeshkar, Maajhi chal by Rafi and Saathiya nahi jana by Rafi and Lata. 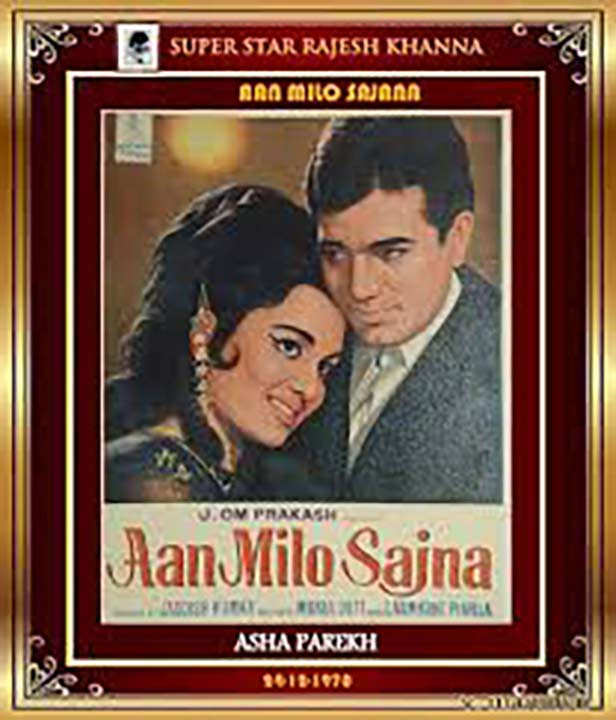 A romantic musical that paired Khanna with the staple heroine of such films, Asha Parekh. The massy entertainer consolidated his career further. He practised his trademark mannerisms upon a hapless public so much in love with him already that they overlooked a nattily dressed uber handsome Vinod Khanna and gave him another hit just for being there. Varsha (Asha Parekh) decides to have an adventure and becomes the fake fiancee Anil Chaudhary (Vinod Khanna) posing as a poor girl Deepali who is doing it for money. Anil’s mother Saavitri Devi Chaudhary (Nirupa Roy) dislikes him and has put a condition in her will that Anil will inherit her wealth only upon getting married to a suitable girl. Things get complicated when Varsha falls in love with Ajit (Rajesh Khanna), who is later accused of murder. The song Achha to hum chalte hain from the film is still quite famous. 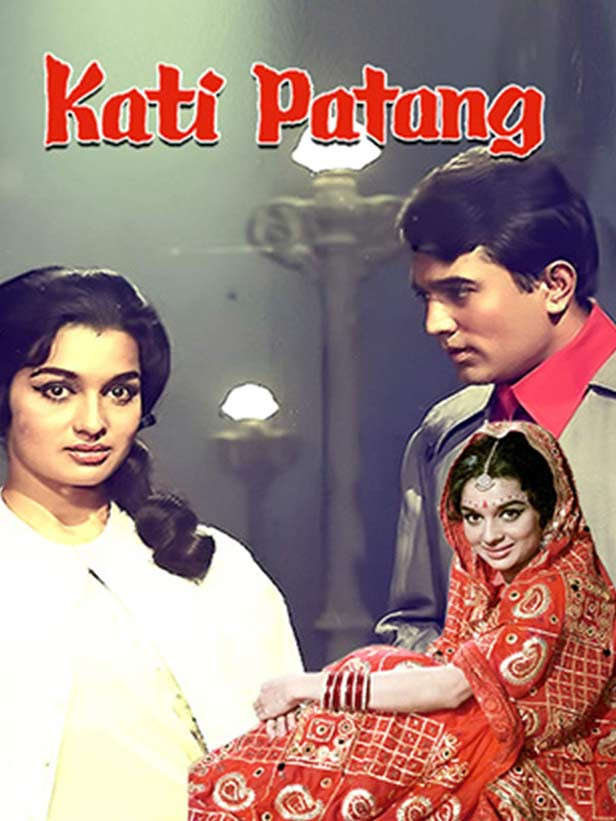 A man falls in love with a widow only to know later that she was merely pretending to be one. Well, the film proved a hit despite the improbable storyline. Khanna is pitch-perfect as a man who thinks he has found his ideal mate and his disillusionment when he believes she’s betrayed him is spot on too. Asha Parekh was fabulous as the girl who thanks to circumstances has to pretend to be a widow. She won a Filmfare Best Actress trophy for it. RD Burman’s songs like Yeh shaam mastani, Pyar deewana hota hai, Yeh jo mohabbat hai are still popular today. 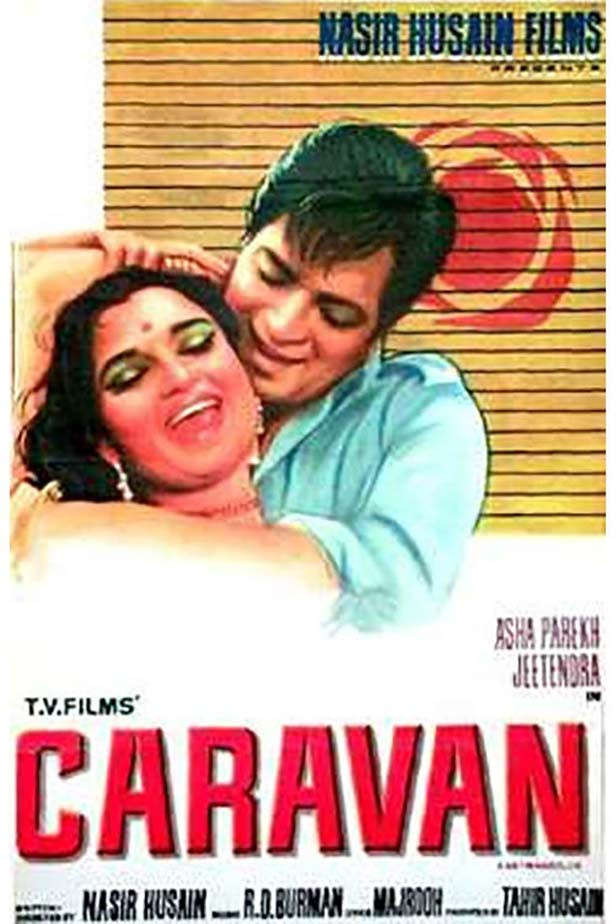 Sunita (Asha Parekh) is fleeing from a scheming goon Rajan (Ravindra Kapoor). She is tricked into marrying Rajan, who wants Sunita’s property after killing her father. She escapes and comes across Mohan (Jeetendra) and Johnny (Kishan Mehta). Mohan is a truck driver who is friendly with the gipsies and she hides with him and ends up falling in love with him. But even this is fraught with danger as a dangerous knife-wielding gipsy girl (Aruna Irani) wants to kill her as she too has the hots for Mohan.

Who is the Serpent on ‘The Masked Singer’?

Inside the gardens of Bollywood stars’ homes