Since the beginning of April, Nadia Lyudchik, a 35-year-old assistant film producer who used to work on shoots in Kyiv, Ukraine, has been volunteering as a coordinator in her native city, Minsk – in neighbouring Belarus.

She still occasionally works on film sets in Minsk since Belarus, unlike much of the rest of the world and Eastern European region, is not under lockdown.

But most of her time is now spent coordinating hundreds of volunteers to ensure that masks and other safety equipment get delivered to hospitals and health workers across the country.

She is part of an informal structure called ByCovid-19 created at the end of March and is constantly switching between apps from Telegram to Hangout, from Facebook to Trello, to keep in touch with regional groups and respond to requests.

“Belarusians tend to be passive. I had never seen such a coordinating effort around one goal in Belarus, it’s impressive,” she told Al Jazeera by phone.

Belarus, a country of about 9.5 million people where most live in urban centres, has been run by the same president, Alexander Lukashenko, since 1994, and is now grappling with one of Europe’s highest per capita coronavirus infection rates.

According to Johns Hopkins University data, there are at least 19,255 cases of the new coronavirus.

COVID-19 has led to the deaths of at least 112 people in the country, but some experts say that many coronavirus-related fatalities are registered as cases of pneumonia.

Lukashenko, who is campaigning for the presidential election to be held by the end of August, has repeatedly played down the danger of the coronavirus, saying a lockdown would be ineffective, unjustified and bad for business and society.

He still wants to go ahead with a military parade on Saturday, celebrating the 75th anniversary of World War II – a move that has raised concerns from Human Rights Watch, which said the event “defies public health recommendations”.

“We can’t cancel it,” Lukashenko said. “Those people died for us.”

In a lax attempt at encouraging social distancing, he added: “You don’t need to drag anyone to the event.”

Anastasiya Kharlanova (C), a soccer player of FC Minsk, watches the match of Belarusian Women’s Vysheyshaya Liga, despite most sport events being cancelled around the world, following the outbreak of the coronavirus disease (COVID-19), in Minsk Belarus April 30, 2020 [Vasily Fedosenko/Reuters]

The World Health Organization recently singled Belarus out for a “lack of adequate social distancing measures” and called for the country to shutter nonessential businesses and enforce distance learning.

But the country’s approach remains relaxed – it has so far advised self-isolation for those who have tested positive or returned from a foreign country and said people should maintain a 1.5-metre distance.

In March, Lukashenko said: “‘People should not only wash their hands with vodka but also poison the virus with it.”

Cafes and bars are still open, the football league is going ahead and on April 25, around 25 percent of the population took part in a “community work day”, including the president himself.

Fearing a worse outbreak and with poor expectations of the authorities, many Belarusians are taking it upon themselves to try and contain the virus and help others.

“It’s a miracle every time we find a seller offering masks at a normal price,” said Lyudchik, whose volunteer group has secured 50,000 masks so far and raised more than $210,000 using a local crowd-funding website.

I’m afraid the situation in Belarus could look like Italy. As long as there won’t be any lockdown, people will have to go to work. Otherwise, they can be fired.

Alexey, psychologist based in Minsk

Since she returned from Ukraine, Lyudchik has been trying to respect physical distancing recommendations being observed in other countries.

According to a recent Google mobility report, Belarusians have attended fewer “retail and recreation” sites such as theatres or restaurants (down by 24 percent) but their presence in parks rose by 40 percent.

Alexey, a psychologist based in Minsk, has been living in self-isolation for more than a month.

“I just go out to the nearby supermarket, wearing a mask and gloves. There is hand sanitiser and customers are asked to keep a distance of 1.5 metres marked on the floor. I don’t take the metro any more but I heard it’s much less busy now.”

Even though he had no symptoms, Alexey refused to visit his relatives in Grodno city for Easter.

“I’m afraid the situation in Belarus could look like Italy. As long as there won’t be any lockdown, people will have to go to work. Otherwise, they can be fired.” 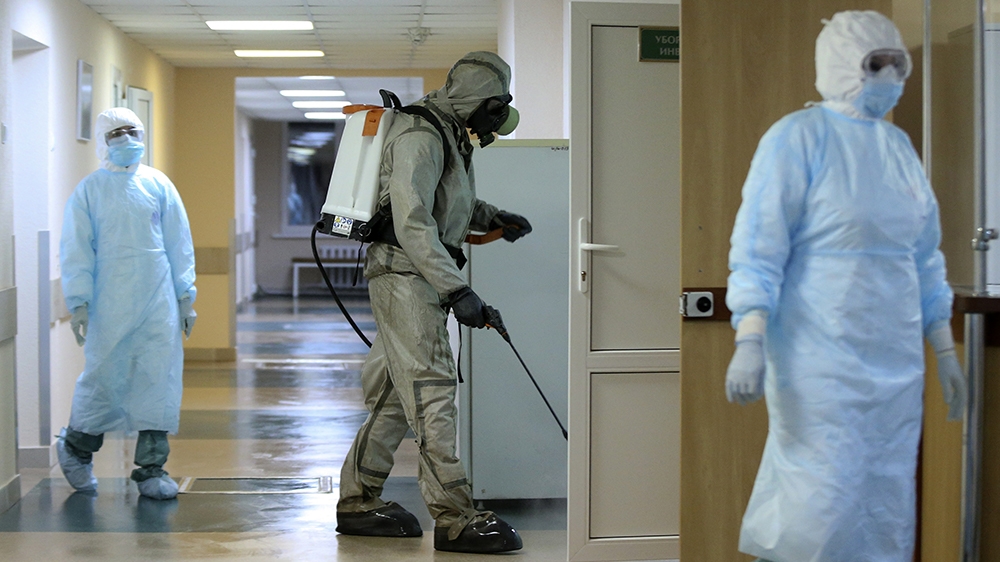 Employees and a serviceman of the Troops of Radiological, Chemical and Biological Defence of the Belorussian Defence Ministry disinfecting the premises of the Republican Scientific and Practical Center of Traumatology and Orthopedics as part of measures to prevent the spread of the COVID-19 coronavirus infection [Natalia Fedosenko/TASS via Getty Images]

Andrei Yahorau, an analyst at the Centre for European Transformation, a Minsk-based think tank specialised in Central and Eastern Europe, said: “Lukashenko is irresponsible. You need to explain to the people what’s really going on.”

While the Ministry of Health has taken measures to encourage social distancing, it cannot overrule Lukashenko, he said.

Schools, which were closed for three weeks around Easter, have now reopened. However, parents have the option to keep their children at home.

Universities were allowed to switch to e-learning but many did not.

Yahorau has withdrawn his two children from nursery and lives with his family in self-isolation.

But while critical of Lukashenko’s approach, Yahorau is also sceptical about a full lockdown.

“Belarus doesn’t have the resources to implement that,” he said. “Companies should decide which industrial processes could be stopped and which ones cannot.”

He said Belarus would likely face economic tightening not only as a result of the coronavirus pandemic but also a Russian trade oil crisis that worsened this past winter.

Benefits of internet and social media

The internet has provided people with a forum to share concerns and acts as a meeting place for Belarusians who are keen to employ physical distancing.

People on social media have been sharing stories from COVID-19 patients or doctors depicting a dire situation and denouncing a lack of measures.

Many in the private sector – employing almost half of the working population – work online. And religious leaders have invited their believers to stay at home and broadcast services on the internet.

The Dynamo Brest, a popular football club in the West of the country, has started to sell virtual tickets enabling fans to be virtually present with their picture in the stadium.

The Federation of Trade Unions moved its traditional May 1 parade online.

Grassroots and decentralised, ByCovid19 is attending to the needs of health workers with its team of volunteers, who range from grannies ready to cook to IT specialists.

Corporations and the blossoming IT sector have joined the solidarity movement.

“We can be faster than the government as we don’t have to comply with all the bureaucracy,” said Lyudchik, adding that the group works closely with the Ministry of Health.

Katerina Sergeyeva, director of Imena, an NGO that helped set up ByCovid19, and her peers recently launched a hotline for the elderly and another offering psychological support for health workers.

“Belarus is small and we are the last in the queue for protective equipment,” she said. “No government in the world can cope on their own with COVID-19.” 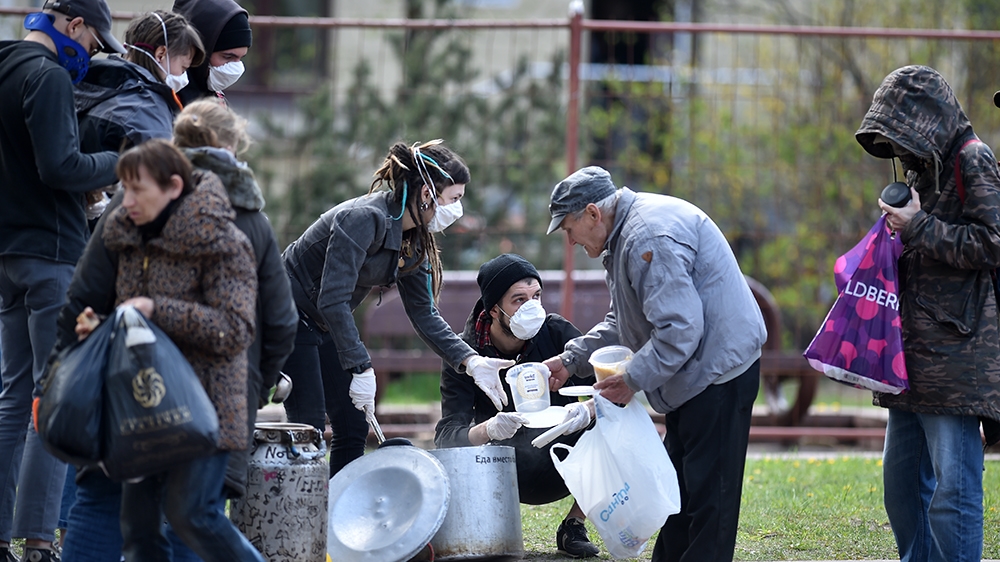 Volunteers wearing face masks distribute meals to homeless people in central Minsk, on May 2, 2020, during the COVID-19 outbreak, caused by the novel coronavirus [Sergei Gapon/AFP]

How the spread of coronavirus is testing...