Attack On Afghan Hospital Kills At Least 16, Including Newborns : NPR

An Afghan security officer carries away a baby after an attack on a hospital’s maternity section in Kabul on Tuesday. 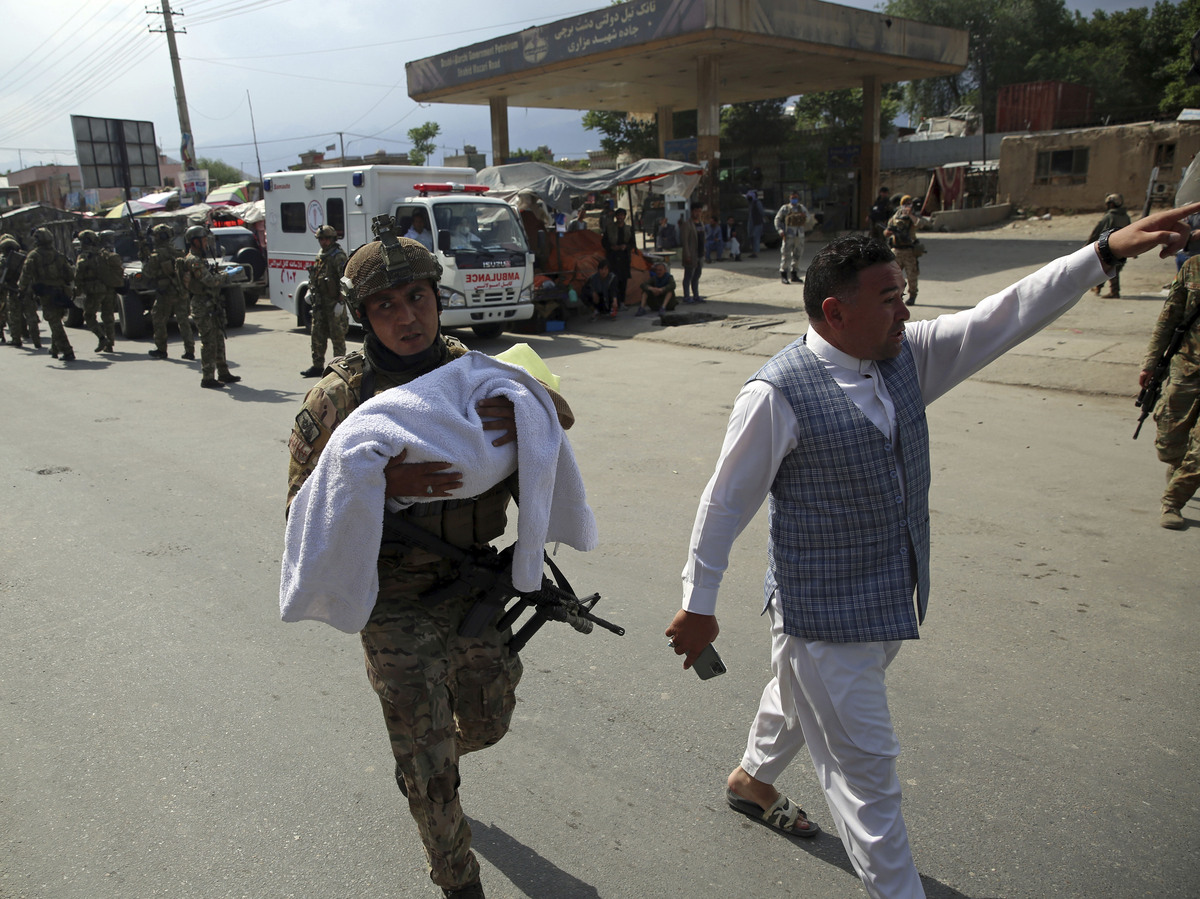 An Afghan security officer carries away a baby after an attack on a hospital’s maternity section in Kabul on Tuesday.

Afghanistan is reeling after a spasm of violence left dozens of civilians dead across the country Tuesday — including an assault in Kabul, where gunmen stormed a hospital’s maternity ward and left at least 16 people dead. Among the victims in the Afghan capital were newborn babies, their mothers and the nurses who had been supporting them both.

The attack in Kabul came within hours of another assault, this one more than 100 miles to the east in Nangarhar province, which left at least 24 people dead and dozens more injured after a suicide blast tore through a funeral.

None of the active militant groups in the country immediately claimed responsibility for the attacks Tuesday. Through a spokesman, the Taliban specifically denied involvement in both assaults, saying of the funeral blast that it “condemns such actions.”

Even by the grim standards of a country that has seen more than four decades of violence, the attack on Dasht-e-Barchi hospital in western Kabul — better known by its nickname, “The 100-Bed Hospital” — proved particularly upsetting.

“Today’s terrorist attack on a maternity hospital in Dasht-e-Barchi, Kabul is unforgivable,” Marwa Amini, an interior ministry spokesperson, wrote on social media after the attack. “Attacks on pregnant mothers, on sick people and on newborns that have new eyes to the world are not in any dictionary. Newborns breathe the first moments of life with the most horrific scenes. Shame on the terrorists.” 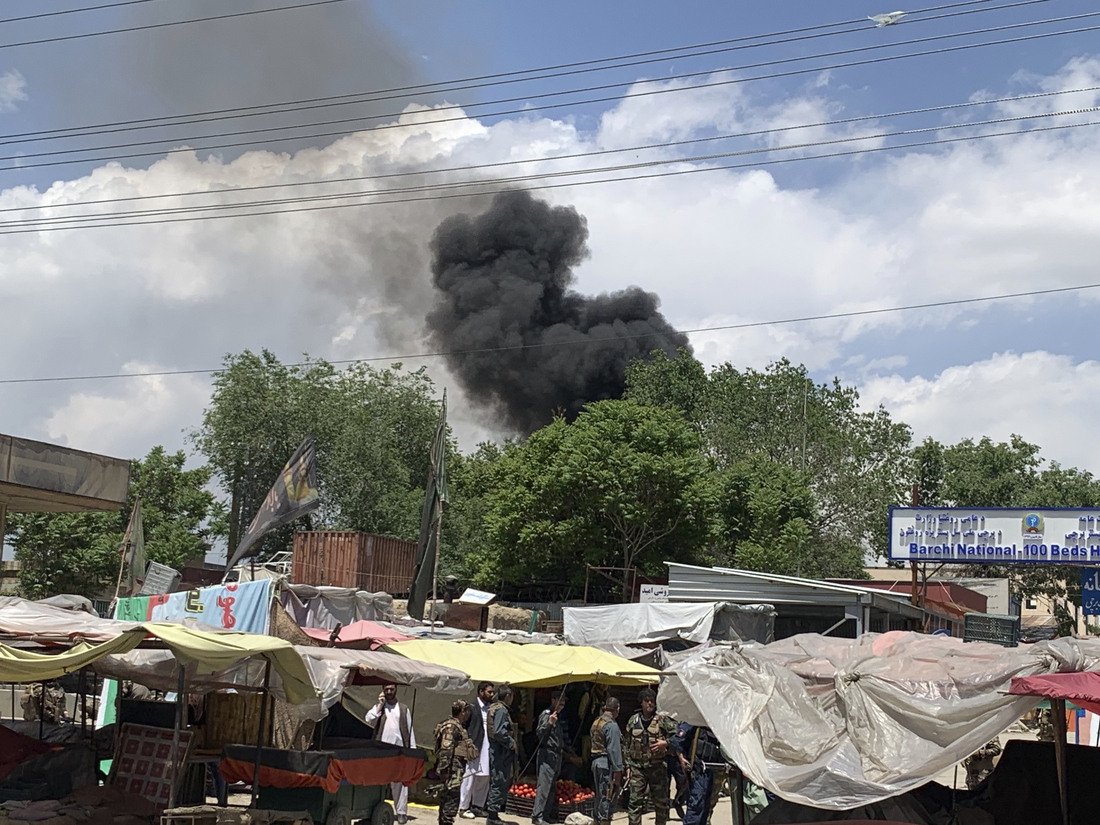 A plume of smoke can be spotted from a distance in Kabul, after gunmen attacked a medical center in the Afghan capital Tuesday. 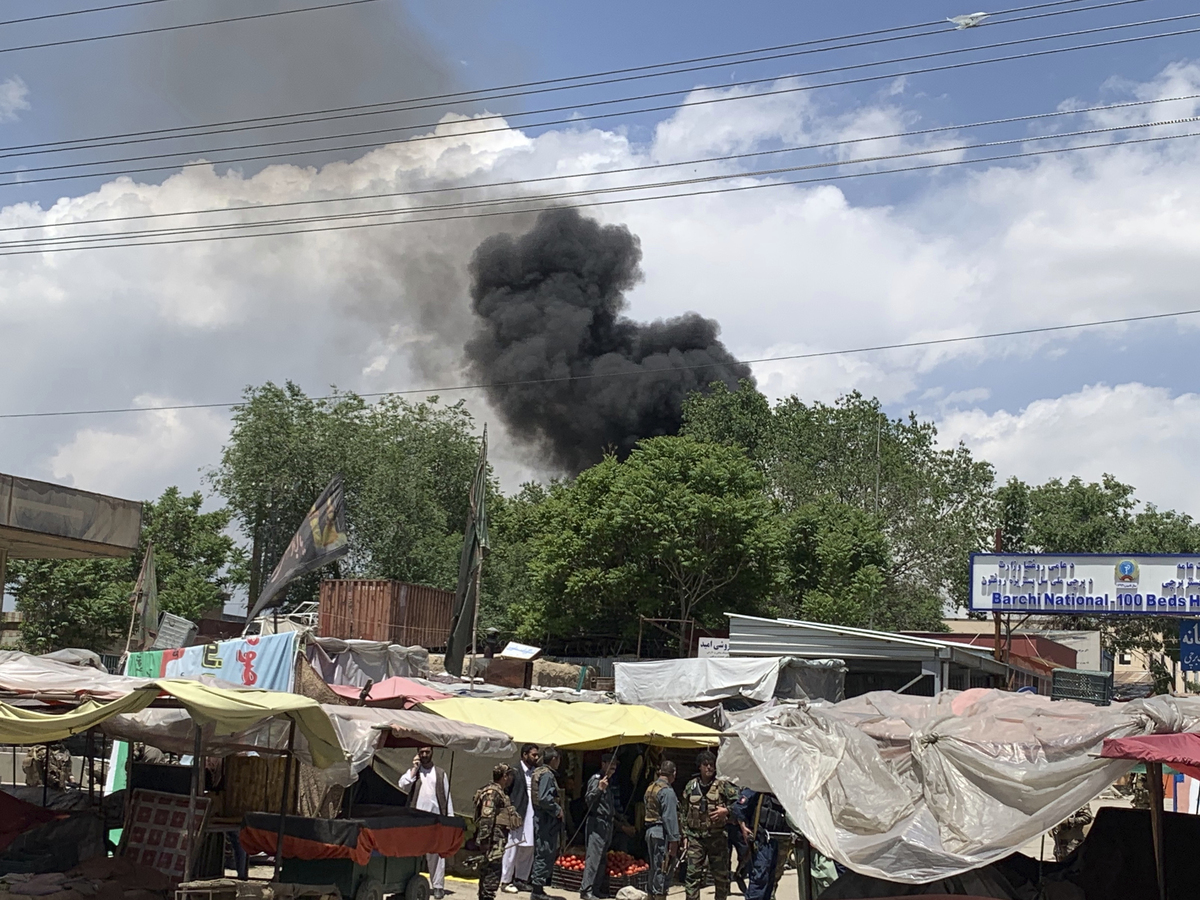 A plume of smoke can be spotted from a distance in Kabul, after gunmen attacked a medical center in the Afghan capital Tuesday.

Assailants opened their mid-morning assault on the hospital with a suicide bombing. The gunmen proceeded to target the hospital’s maternity section, which is operated by international aid group Doctors Without Borders, or MSF.

Afghan police and special forces rushed to the scene, where they engaged in a firefight with the attackers, and government officials say the security forces managed to safely evacuate more than 100 people.

Those rescued included a newborn baby who was rushed out of the hospital by a member of the Afghan special forces. The dramatic rescue was caught on video. Clad in a helmet and flack jacket, assault rifle slung over his shoulder, the man can be seen handing the tightly swaddled infant to medics in the back of an ambulance.

Medical workers with MSF commonly handle complicated pregnancies and births for a section of western Kabul with a population of roughly one million.

Just hours before attackers struck, the organization tweeted that medical workers had just delivered a baby, named Mohammad Omar, by emergency cesarean section in the maternity ward. “He is cute!” the group added.

The fate of baby Mohammad Omar was not immediately clear.

Lajaward is from Maidan Wardak province. Due to fetal distress, where the baby experiences oxygen deprivation, Lajaward had to deliver baby Mohammad Omar via emergency c-section in the maternity of Dasht-e-Barchi hospital in #Kabul.

The attack also caused panic in a guest house for foreigners located behind the hospital — though Amini said the guest house was probably not the intended target because there were other ways to access it, even as the militants headed straight to the hospital. She said the two foreign nationals residing there were safe but provided no further information.

“It was personal for me because I’m preparing for my son’s first birthday. It’s tomorrow,” said Shaharzad Akbar, chairperson of Afghanistan Independent Human Rights Commission.

“Birth is such a moment of hope. It’s this promise — new life, that can be a better life, a different life,” she said, her voice breaking. But the assault on the hospital, she added, reminded Afghans that they would be raising their children in a war, and that “their life is in danger even before they are born.”

“It beggars belief that such a heinous act could be committed when Afghanistan is being ravaged by the COVID-19 pandemic,” said the United Nations’ humanitarian coordinator, Toby Lanzer. “Civilians receiving care in hospitals, health workers, medical infrastructure and aid workers are protected under International Humanitarian Law; violations must be investigated and those behind the attacks brought to justice.”

The neighborhoods surrounding the hospital are dominated by Shiite Hazaras, members of an ethnic group often targeted by Islamic State militants. The Sunni terrorist group has claimed responsibility for a spate of attacks in recent months, including a bloody raid targeting the Sikh religious minority in Kabul.

But in the wake of Tuesday’s attacks, it was the Taliban that drew the wrath of the Afghan government. In a televised address, President Ashraf Ghani said the group has ignored repeated calls to scale back its attacks and discourage the violence of other Islamist militant groups in the country. And he announced that the military will resume offensives against the Taliban.

The Afghan government and the militant group have been locked in an acrimonious negotiation over prisoners and other details considered key to a possible peace deal. Earlier this year, the U.S. and the Taliban agreed to a peace framework of their own, which included a section stipulating that the Islamist group sever its ties with the Islamic State and al-Qaida.

But Hamdullah Mohib, Afghanistan’s national security adviser, says the group has so far failed to uphold its end of the bargain.

“The attacks of the last two months show us and the world that Taliban & their sponsors do not and did not intend to pursue peace. Their attacks this spring against Afghans are comparable to the level of fighting in past fighting seasons,” Mohib tweeted Tuesday.

Prior to the attacks, the Afghan government told NPR that it has temporarily halted the release of Taliban prisoners. Government officials said the militant group must release about 100 more of the prisoners in its custody in order to resume the prisoner swap, which was originally intended as a confidence-building measure. The Afghan government appears frustrated by the U.S.-Taliban deal and has accused the Islamist group of acting in bad faith.

“If the Taliban can not control the violence,” Mohib added, “or their sponsors have now subcontracted their terror to other entities — which was one of our primary concerns from the beginning — then [there] seems little point in continuing to engage Taliban in ‘peace talks.’ “

Viruses versus Lockdowns: It’s Not about Tradeoffs